Screenshots of your games! All Transport Tycoon games acceptable (including TTDPatch and OpenTTD).
Post Reply
72 posts

) and inspired me to start my own.
These ones are just as nice, if not more so!

Which roof arches are those at Modtown? I don't recognise them, and they look really useful.
Temporary Permanent signature filling text. Content coming soon delayed indefinitely! Oh, and I have had a screenshot thread.
Linux user (XMonad DWM/KDE, Arch), IRC obsessive and rail enthusiast. No longer building robots; now I ring church bells.
Author of an incredibly boring stickied post about NewGRFs.
Top

Cheers, the praise is very much appreciated! Speaking of inspiration, Ivan Furlanis' excellent thread is where it all started - it's definitely worth a visit if you haven't seen his screenshots yet. As for the station, it is part of the British Station Set v0.0.4, available on Bananas.

Stannston 1958.png
Stannston was the destination of my first railway line in 1914, served by a 0-6-0 tram engine for passengers and two NER EF1s shuffling goods from and to Windby docks. It remains a rather important trans-shipment center. Also pictured is an elderly Garratt steamer.
(418.77 KiB) Downloaded 5 times

Dondstow 1958.png
The RNG picked this hilltop of all places for Dondstow. Not the most convenient location for a major city, but what can you do?
(403.07 KiB) Downloaded 5 times

These are very agreeable to me. Excellent work!
Official TT-Dave Fan Club

Cheers! I don't have much spare time at the moment, but hopefully these screenshots can make up for the lack of recent activity.

This game and screenshots are very nice. love your gameplay Dr. B. Ching!
Would you be so kind to share your heightmap please?

[EDIT: sorry, realized it was on the linked thread. Never mind!]
Top

Long time no see! OpenTTD has captured my imagination again, so it's time to start a new game. I can't promise frequent updates, but will post them as time and motivation allow. Let's get the introduction out of the way first.

The premise
Instead of starting in the early 1900s as usual, I wanted to have a go at a more modern scenario, so this time around 1977 shall be it. Another major change is the way the map is set up: ordinarily, I'd just place small towns here and there and connect them in classic TTD style. Here, I've crafted myself a metropolitan area by the name of Kenton, which consists of several individual districts with a combined population of well over 200.000. This will give me an opportunity to try my hand at somewhat realistically sized urban transportation. There's also a pre-built network of highways and secondary rural roads to every single settlement on the map. Distribution of industry is about 30% auto, 70% manual. Shaping all of this was a task that took many, many hours to complete...

The setup
I'm still using my ancient version of OpenTTD (r24113M) patched with tunnel/bridge signals and daylength, but it works just fine for me. General settings:
Yes, 20. Even with a factor of 12 in my previous game, I found that the glut of passengers generated by larger towns could quite easily be overwhelming. At the maximum setting, I should be able to move all these people with a more reasonable number of vehicles (especially buses and trams). Rural branch lines shouldn't be a problem, either. On the downside, the slow passage of time means I'm going to be stuck with the same vehicles for many years to come.

NewGRFs are mostly the same: 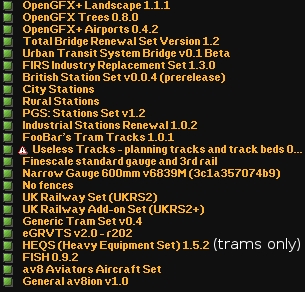 The infrastructure
My approach could best be described as mildly realistic with low terraforming. I've seen enough rail infrastructure in real life and on my monitor to have a good idea as to what extent of earthmoving could be considered appropriate, and I think I have it pretty much nailed down in OpenTTD terms at this point. Four-track main lines and grade separation will be used sparsely where traffic demands it. Construction of rails and roads will have to account for the terrain; again this is a quite mountainous map.

The rolling stock
Trains
Most likely going to be the primary mode of transport. 1977 as opposed to 1975 was chosen specifically because of the introduction date of the BR Class 313. Overall, lots of capable diesels, electrics and D/EMUs available, and the modern freight wagons will allow me to design mixed passenger and freight traffic at 120 kph without having to worry about speed limits in the future. In the early 1900s, freight trains are of course restricted to either 64 or 88 kph, and upgrading means having to manually redo all those timetables as well. Not fun times...

Road vehicles
There will be a tram network in Kenton. I might also use freight trams, but certainly not to the extent of my previous game. There's really no need for that if carrying capacity isn't the primary consideration; trucks of the late 1970s are fast enough and perfectly usable unlike their distant predecessors. Otherwise, trucks and buses will probably find their place mostly for short distances or to fill in gaps in the rail network. Exceptions are possible since there's already motorways and stuff ready to use.

Ships
Well, there is plenty of water around. And fishing grounds, oil rigs and dredging sites. Probably no canal this time.

Aircraft
Helicopters will definitely make an appearance and turboprop commuter planes might fly to very remote communities. As for the rest, I can't really see a use for anything else but long-distance mail, and that's a very big maybe. And yeah, I've patched out the limited range feature in my copy of AV8.

setup_contours.jpg
Lots of mountains, ridges and rivers. Also visible is the circular motorway and the metropolitan area of Kenton.
(1011.97 KiB) Not downloaded yet

setup_big peninsual.jpg
Let's get a closer look at the big peninsular in the northeast.
(848.45 KiB) Not downloaded yet

setup_motorway in the mountains.jpg
Example of what type of challenging terrain the engineers had to overcome to route the motorway through the mountains.
(1.03 MiB) Not downloaded yet

Lol hold on are these motorways ?

There's still some introductory part to take care of, so let's get this out of the way first! My first objective will be passenger transportation in and around Kenton. The northern districts are centered around Downtown, which are sort of pinched in and thus don't have much room to grow other than suburbs on the opposite riverbank. Kenton-Avonbrook and -Liverdown directly to the south face the same dilemma with the adjacent mountain ridge. Routing rails through here to serve PAX and industry might also be a bit of a challenge. On the other side of the ridge, Kenton-Lesditch has lots of unobstructed land to expand to and may become the dominant district in terms of population and size.

The valleys north of Kenton are populated by small farming communities devoted mostly to agriculture and related supply chains. Commuter rail to and from Kenton will be a thing, but I haven't decided on what the implementation will look like. Should I go for a modern approach with relatively short headways (say once per hour as is typical where I live), these lines may be electrified as an extension of Kenton's suburban network and shared with freight trains. Even 3rd rail would be feasible and not entirely unrealistic thanks to BR Class 313, 71 and 73. The rural branch line approach would be mostly single track with DMUs or short loco-hauled trains as you'd expect.

The southern part of the map is largely devoid of major settlements, but hosts a wide variety of raw materials such as dinosaur juice and ore. The main objective here is to route at least one main line through very difficult terrain. Lots of long-distance freight hauling, intercity trains...well, maybe not so many. I'm tempted to build a dedicated line for HST, which is something I haven't tried before, however the prerequisite for this would be to stimulate town growth. At the start, the largest city over there barely tops 5000 inhabitants, and you just don't tunnel through the mountains to send APT-Ps to a hamlet as tiny as this.

setup_Kenton.jpg
(937.7 KiB) Not downloaded yet

setup_farming.jpg
(637.8 KiB) Not downloaded yet

Time to get the Metro started! My initial setup consists of three lines, which overlap partially in more densely populated areas with high ridership. This also mean shorter headways where it matters and easy transfer between the lines at the two most important stations (Kenton-Downtown and -Lesditch Central).

Both Green and Yellow Lines start at nearby Wreedingstone and then split to serve the northern and southern suburbs of Kenton respectively. Rolling stock is BR Class 313 since part of the tracks will be shared with long-distance express freight and intercity PAX running on overhead electrification in the future. The Red Line was build to rapid transit standard with EL structures where feasible, as one of my self-imposed restrictions is to avoid large-scale demolition of town infrastructure and buildings. London Underground 1967 units are in use here and run at much shorter intervals than the suburban trains.

1978_first trains and trams near Avonbrook.png
(1.05 MiB) Not downloaded yet

Trams are also worthy of mention, so let's start with route #1. It connects Kenton-Wrondgrove with -Downtown and passes through -Liverdown on the way there. The big loop around Downtown is served counterclockwise. This approach is more light rail than streetcar, so the right-of-way uses the median of Kenton's main ave and longer distances between stops to boost average speed. The quite Tatra KT4D-esque vehicles are well-suited for this role, given that they seat 71, have a top speed of 72 kph and good acceleration to boot. Might also be a good choice for short interurban lines.

Glad you're enjoying the screenshots! The one-way arrows don't bother me, but I can see why you don't like them. They're there primarily to differentiate between motorways and local four-lane roads, though there of course isn't an in-game difference in functionality.

Tram route #2 was initially constructed as a stop-gap/pre-Metro kind of measure, however it has become a permanent fixture. It starts at the Downtown loop (clockwise), then passes through Avonbrook and the tunnel to Lesditch. The right-of-way in this area is pretty standard stuff, but the latter portion should be more interesting. I was curious to see how an elevated tramway would look like in a more realistically-sized downtown area, and I dare say it turned out quite well. The bridges are hard to see among the many high-rise buildings, though you may spot an EL structure or two at Central station. The route terminates in the eastern suburbs.

Tram routes #3 and #4 are restricted to Lesditch. #3 serves Downtown in a large circle (5 vehicles per direction of travel), whereas #4 covers the most important bits of Upper Lesditch. Also more EL goodness.

The districts to the north and west of Downtown have developed quite nicely. It's a bit cramped, but I did mange to fit in a decently-sized multi freight station at Fresley and a tiny one for Fort Guhead's oil refinery. Also, there's a helicopter as promised in the introduction: a pair of Sikorsky S-61s shuttle crew from and to every oil rig on the upper part of the map.

In case you were wondering, PAX services also use the overhead main line out of Downtown. Trains don't run all the way to the mountain pass because it's primarily intended for freight and therefore bypasses most settlements, but Grimpool as the furthest extend of the commuter rail network does have a third-rail connection.

To show it's not all about Kenton and passenger transport, here's a selection of small to medium freight stations in the countryside.

1988_cutting at Saborough-Cheethwaite.jpg
(3.46 MiB) Not downloaded yet

Love the way you managed to get such a realistic outer suburban sprawl - and a real 'end of the line' feel at Grimpool!
Soccer Mad Boffins
Watch my YouTube Channel
Top
Post Reply
72 posts