Screenshots and stuff by arikover

Screenshots of your games! All Transport Tycoon games acceptable (including TTDPatch and OpenTTD).
Post Reply
8 posts • Page 1 of 1

Screenshots and stuff by arikover

In this thread, I'll be sharing some screenshots.

My latest game takes place in the countryside, in an undetermined (some would say imaginary) french-speaking region. In the end of the 19th century, this region was scarcely populated, and transport networks were inexistent, to say the least. Thanks to a 1895 law, many railroad companies began to prosper, building up narrow gauge networks, mostly.

In this post, we will focus on the activity of the 'Chemins de Fer du Sud' (Southern Railroads) or CFS for short. These pictures were taken in 1908. 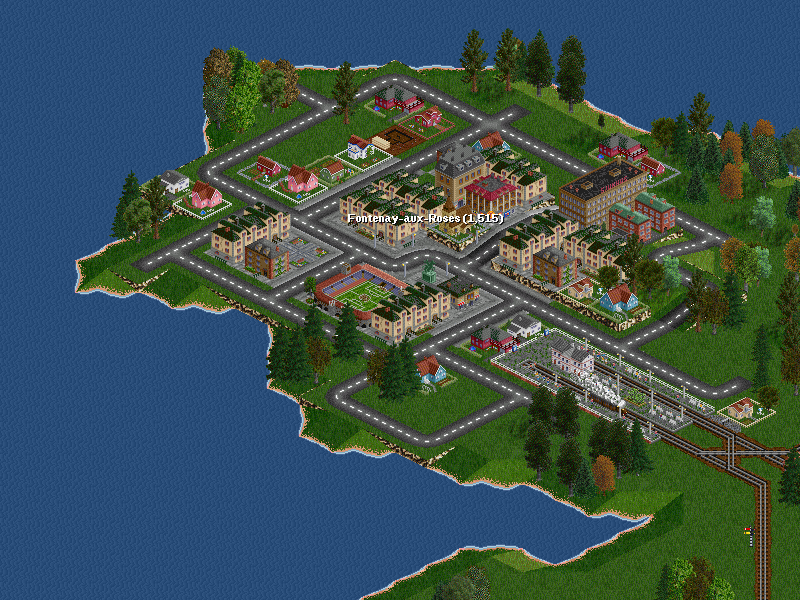 Here you can see the city of Fontenay aux Roses, with its small station. A small passenger train pulled by a 120T is leaving, heading the small village of Rouen. 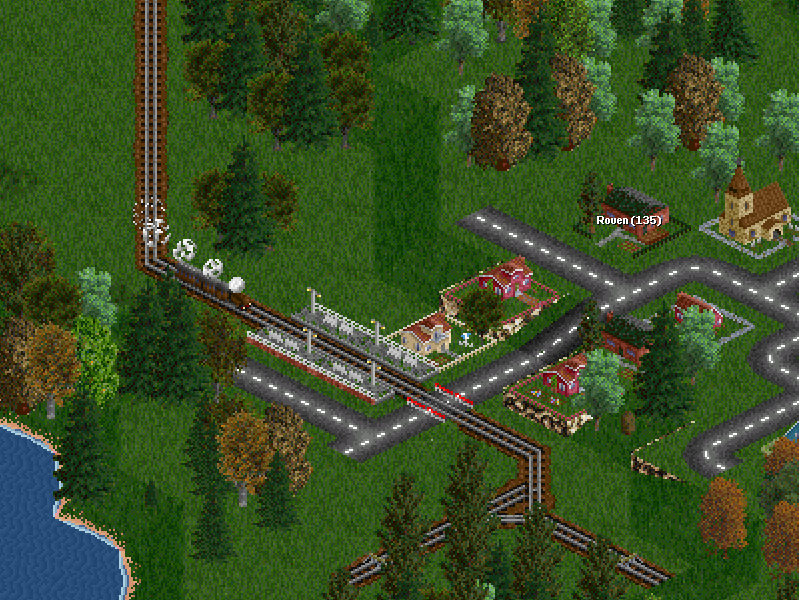 Here, the same train is about to stop in the Rouen station, terminus of the line. You can see a rudimentary Y, allowing the train to go back. Historically, this line was the first of the CFS, built in 1895. In 1908, it is a small branch of the network, with only one train servicing it.

Leaving Fontenay aux Roses, we arrive to the next station of the network's main line : Poitiers. Leaving the station and heading Fontenay aux Roses (SW) you can see a long train pulled by a fast 230T. These train service all the stations on the main line. They are often overloaded...
You can also see on the right side of the image the station of Saint Etienne, at the end of a short branch line. Only one consist services Saint Etienne, but a simple trick allows the company to schedule a great number of return trips per day.

More on that in the next post...
Some screenshots of mine...
Top

I like these a lot.
Total Alpine Replacement Set: Industry, Town, Objects
Top

I just love that picture of Rouen. So nice and peaceful!
Top

Thank you for your kind comments!

In this post, I will explain how CFS managed to schedule so many return trips to St Etienne in 1908 (aaand that doesn't sound too exciting now I wrote it).

Here we can see the morning train (pulled by a 031T) from Poitiers arriving at St Etienne. 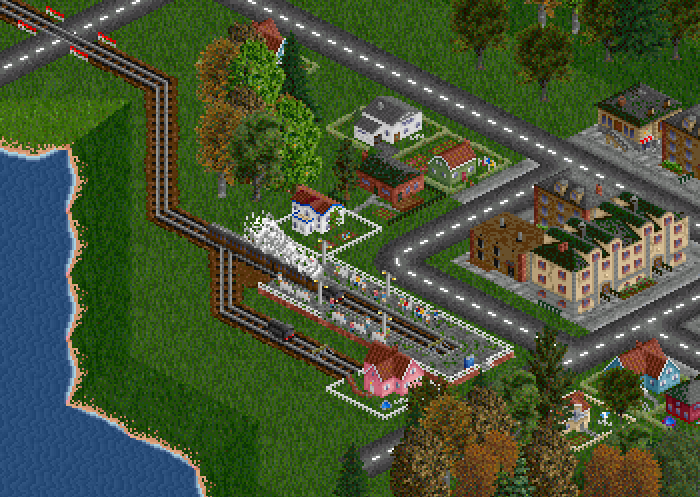 Normally, the engine would go to the other end of the consist via a bypass track, but St Etienne has got terminus station, so this is not possible. Fortunately, there is another 031T waiting on the side track... 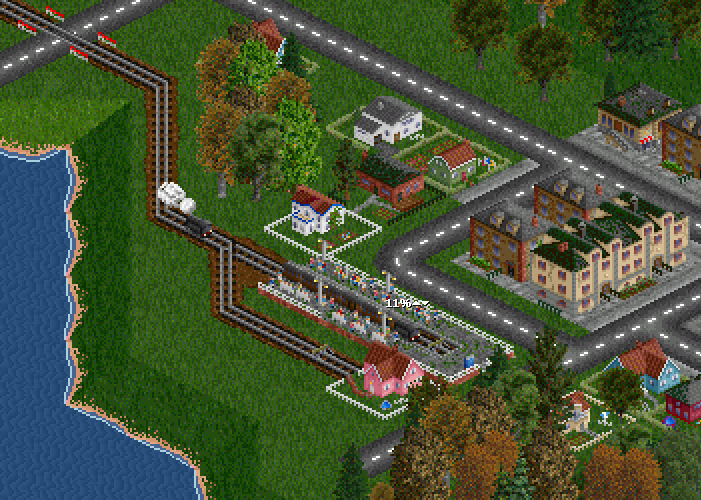 As soon as the train is arrived, the second engine starts. While the passengers are going in or out of the wagons (in a very chaotic-french way, as usual), the leading engine is detached of the front and the second engine is attached to the back of the consist. 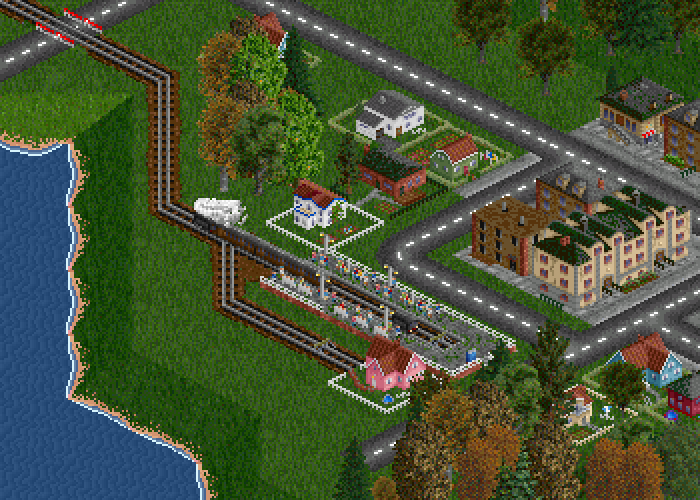 The train now leaves St Etienne station, and the leading engine is refuelled and moved to the side track, waiting for the next train. Tadaa!

Some of you will certainly argue that building a simple bypass in the station would allow to use only one engine. The fact is that 031T are old CFS engines that were used on the main line, before they were replaced by faster 230T, as shown earlier. As the 031T were still in good shape, it would have been silly to scrap them, so here they are. Furthermore, so much servicing means less breakdowns.

Or maybe I just wanted to make some silly screenshots.
Some screenshots of mine...
Top

This IS real shunting!

The Metz CFS Station, with a long train leaving to Fontenay aux Roses. You can also see in the sidings a 031T with a few wagons.


Some of you will have noticed another station in Metz. Another line ends in Metz, laid by the 'Réseau de Metz, Créteil & vallée d'Aix'. More on this next time...
Some screenshots of mine...
Top

Some more shots from the same game...

The MCA (Metz, Créteil & vallée d'Aix) company runs a medium sized network, with a main line from Metz to Créteil, and a small branch line to Aix. A good revenue is made by transporting sugar beet from a farm near Aix to a sugar refinery near Créteil.

Here you have a broader view of Metz, with its two stations and the populous tram line linking them. You should also be able to spot a MCA train (lead by a 031T) coming out of the tunnel and antering the MCA station.

Here you can see the city of Aix, with its small station where a small mixt train is awaiting a empty train returning from the aforementioned refinery.

Northwest from Aix is the farm where the sugar beets come from. Here you can see a train hauling its cargo across the lonely plateau.