More info about the Nintendo DS port, including a rough roadmap can be found in the OpenTTD Wiki.

The current version of OpenTTD DS is Alpha 6.

Changelog for Alpha 6: Known bugs: Please report any bugs that are not mentioned in this list.

A note to anyone looking at the source code: I didn't clean it up this time.

And lots of things regarding GUI are hacked into it until I have time to redo it properly.

post-a6.diff
source diff (for developers only)
cleaned up a bit and updated to latest svn.
(239.67 KiB) Downloaded 1863 times

you are the MAN
are you planning to return an active OTTD developer?

can you enable swapping or use the cards memory? i use the SuperCard Lite, which have, if i'm not wrong, 32MB of ram
about the interface, why not use the top screen?

Nice!
Well, now many controls are changed to be compatible even with low (= ~320x200) resolutions, so I am not sure whether is is good to make a complete fork-off.
Optimal way would be to put all the memory-hungry things to be sized according to some constant (like it is with MAX_SCREEN_WIDTH = 2048 now) and for some memory-limited devices you'll just produce version with these constants appropriately lowered. So perhaps put in few patches to similarly "constantize" these thing, so people attempting to port to another device, but similarly memory limited would have easier start.

Although some function (like screenshot) could be probably left out due to limited capabilities of the device.
If you need something, do it yourself or it will be never done.

conditional compiling any one?
You have to compile it for the ARM processor anyway so you could "just" put everything you don't need or change for the DS into compile time conditionals. I know it's not that easy but you wouldn't need to fork off.
Top

The bottom screen could hold all the interface (and a switch screens button obviously) which would free up some room on the top screen and give a better view of what was going off. Switch screens whenever we need to interact with the "world" using whatever tools we have selected at the time.

You thought about adding an option to use a RAM expansion like the one that comes with the Opera browser?
Rasing Awareness: Aspergers Syndrome 1 (NAS UK) • 2 (BBC) • 3 (YaleDDC)

First of all, getting this far is already a great job, but... I do not think that creating a fork will be benificial for either version of OpenTTD.

In my opinion there can be enough room in OpenTTD to make a compile time configuration option for low memory/small binary size. Also making the current windows useable at very low resolutions is something that I've been working on every now and then in OpenTTD myself to 'aid' people who want to port it to a small device, such as a Nintendo DS or a Windows Mobile or a Symbian. However, the primary reason for not doing the branch is that it becomes easier for other porters to use 'just' standard trunk with 'low memory' mode for their small devices instead of a (maybe) outdated version of the DS port. It will furthermore make keeping the DS port synced with main OpenTTD version much simpler as all kinds of API changes will be done for you by the people who are performing the changes. On the other hand it means that every once in a while someone has to compile a DS binary and test whether it still uses few enough memory.

Another thing that I have seen is that a lot of branches/forks get into big trouble syncing when they changes are scattered around and small.
Top

Zelda and Thrilvill both have points in the game where you need to switch the content's of the top and bottom screens since you catch touch the top screen.

I'd love to see this port become playable.

Keep up the wonderful work. 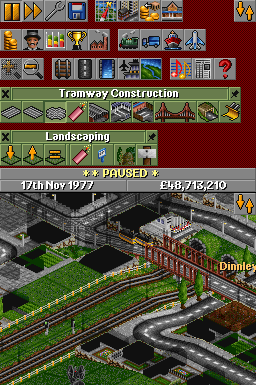 the DS version of The Settlers (which is actuly The Settlers II: Venni Venci Vendi) uses the right sholder button to swtch between screens.

Maybe, instead of using the standard icons it could be a good idea to use smaller icons (~20px) to save space on the screen.
Also, the menus could be re-laid in order to save space.
Erm...
Thats It.
Top

Standard icons are 22x22 px large, so smaller icons than 20x20 would be needed, perhaps something like 12x12 px ...
If you need something, do it yourself or it will be never done.

I tried making a test icon (this one is the save-game button) in GIMP at 16x16 resolution.
Is this OK?

What about this one?

Way better than my one!

I tried resizing the titlebar.
This one is at 16px

That's what i'm doing,
but after the resize, i'm redrawing them to remove the blur

Here's what i've got so far.

I would seriously like this, however I have no access to a copyable ROM for it.
Hmm, what should I put here...
Top

Well, the guy's face is good for toyland!

Fixed the poor guy's eyes...
edit: i thought some lines in the industry roof and in the zoom buttons were too blurry...

That looks much better

<edit>
Yeah, the magnifying glases look better with out the glass efect from the bigger versions.

And the darker roof fits better too