Some ideas about trees

Some ideas about trees

by LaChupacabra
I would have some ideas about trees. Perhaps some of them will interest you.

1. Percentage limitation of forest areas
2. Improved tree generation
3. The appearance of trees depends on the season
4. Shaded and brightened trees on the slopes of the mountains
5. Areas of eternal forests
6. Forests around Forests (enterprises)
7. Trees less often planted on the south side of roads, tracks and other structures

by LaChupacabra
1. Percentage limitation of forest areas
Currently:
The player has the choice of playing on maps completely devoid of trees or completely covered with forests. It is true that after the last change in version 1.10.2 it is possible to stop the further growth of trees, but this solution, although it is a step forward and has its advantages, has at least two significant drawbacks: firstly, it doesn't work in the online game (it works only in scenarios where the location of forests has been determined in advance), secondly, it makes it impossible to remove trees, even in the scenario editor, which can be very burdensome - it was possible before.
Idea:
Thanks to the setting available at the window level and the map generation settings, it would be possible to limit the amount of forests on the map, making them look much more natural. The default value could be 30%. The size of the saved and downloaded files (especially large maps) would be much smaller without the old beauty of the maps.
Solution details: 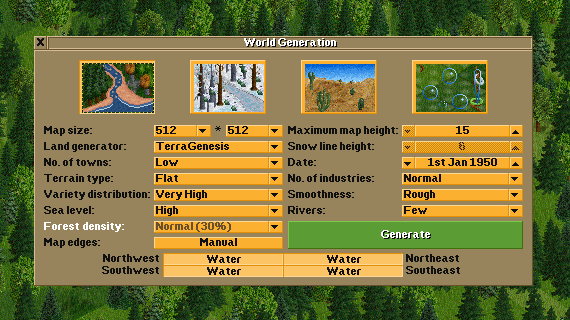 by LaChupacabra
2. Improving tree generation
Currently, when trees are initially generated, these are all too often planted separately. As a result, there are no natural-looking vast meadows and clearly defined forest edges - everything is blurry.
Generating new trees during the game is different - then they are much more often planted next to the existing ones. By generating forests in the scenario, the best, most natural-looking effect can be obtained by speeding up the game and allowing for quite free growth. I think that the same very good effect could be obtained in the map generator by improving the current (improved) algorithm so that after generating larger clusters of trees, it would plant the next ones more often near the existing ones than in completely random places.

Another consideration regarding tree generation is the problem with forest crossing railroads and tracks. I think that the algorithm, not being able to plant the tree, could try to plant it in another, closest free field.

Layout of trees after several dozen years of free growth from nothing: 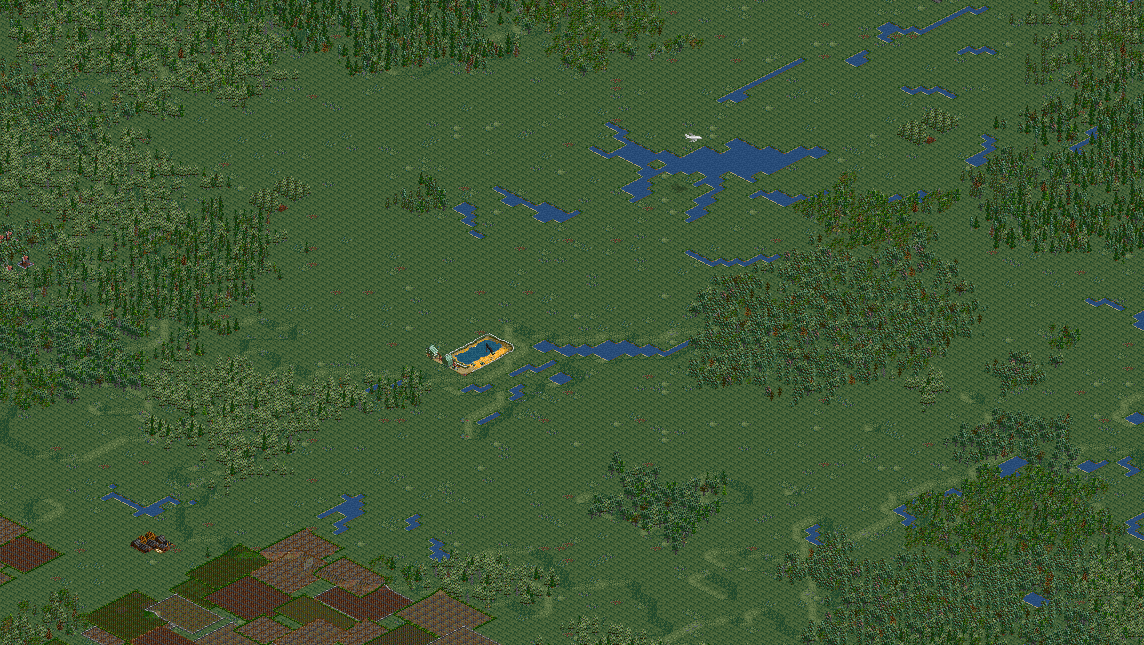 The current, not very natural looking tree arrangement at the start of the game 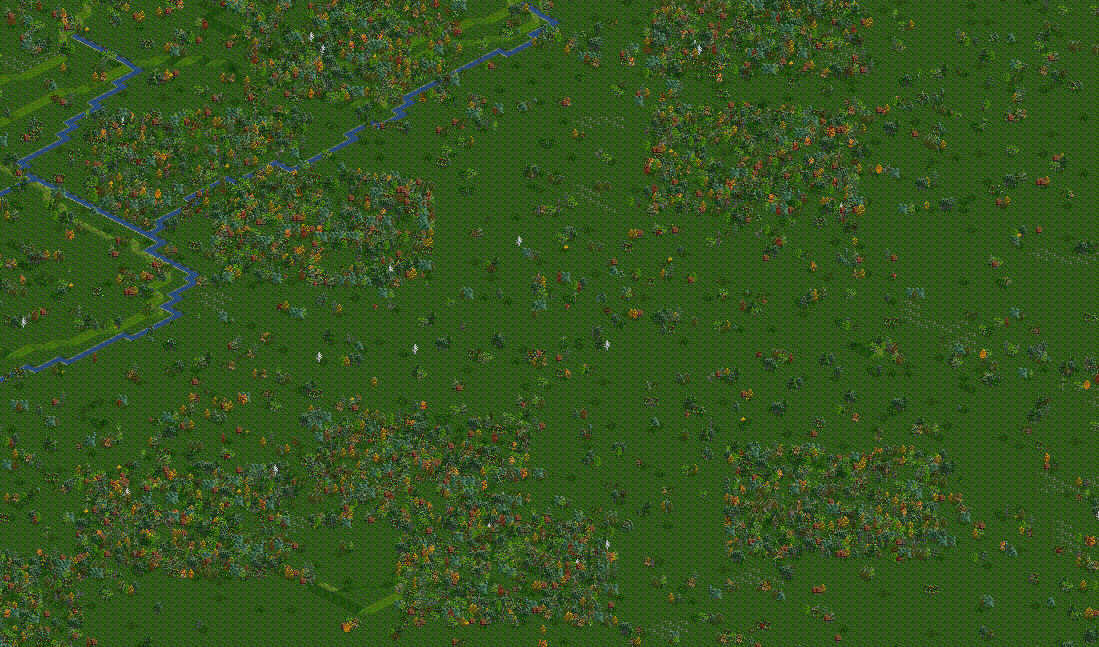 3. The appearance of trees depends on the season

by LaChupacabra
3. The appearance of trees depends on the season
As long as it would not create an excessive burden, it would be a very nice addition in my opinion. Currently, no matter if it's spring, summer, autumn or winter, the map looks the same all the time. It would be nice to see the same landscape with the colors changing with the seasons...

4. Shaded and brightened trees on the slopes of the mountains

by LaChupacabra
4. Shaded and brightened trees on the slopes of the mountains
Currently:
With the trees view on, you can hardly see the topography. As a result, even the most mountainous map doesn't differ in appearance from the completely flat one.
Idea:
In order to show the relief of the land under the forests, it would be possible to use the shading effect, which is used, for example, in the case of transparent buildings.
Solution details: Hillside without trees 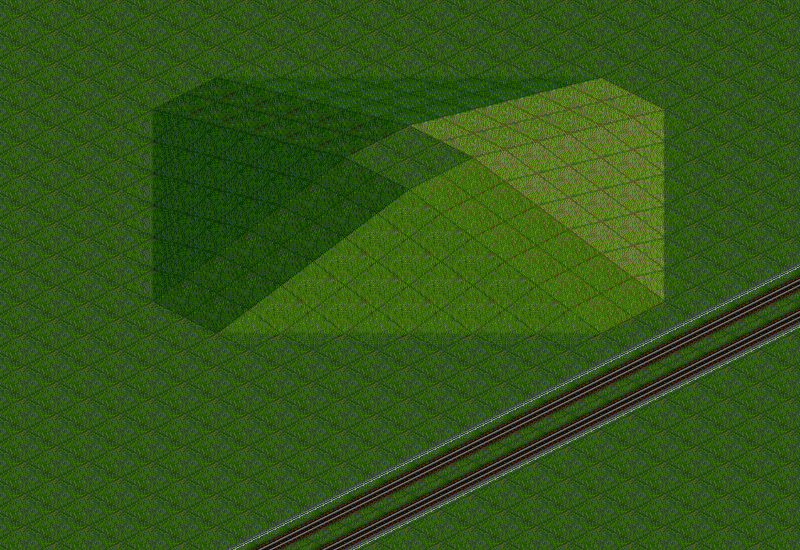 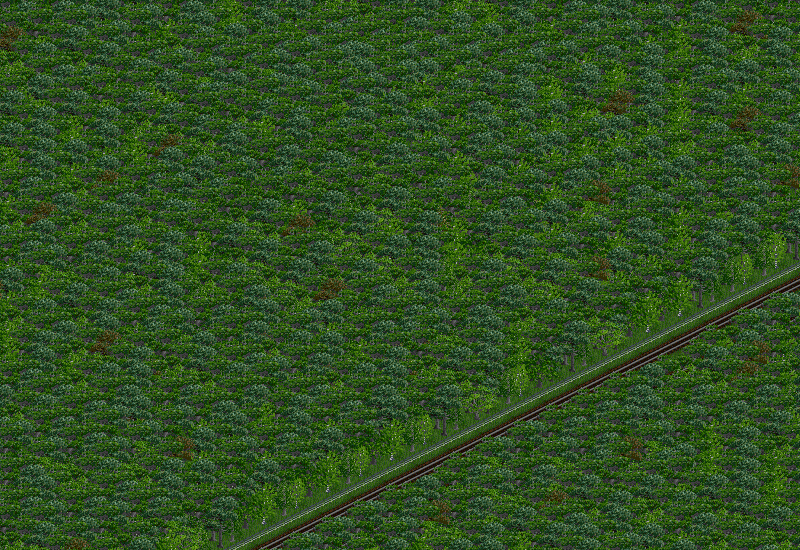 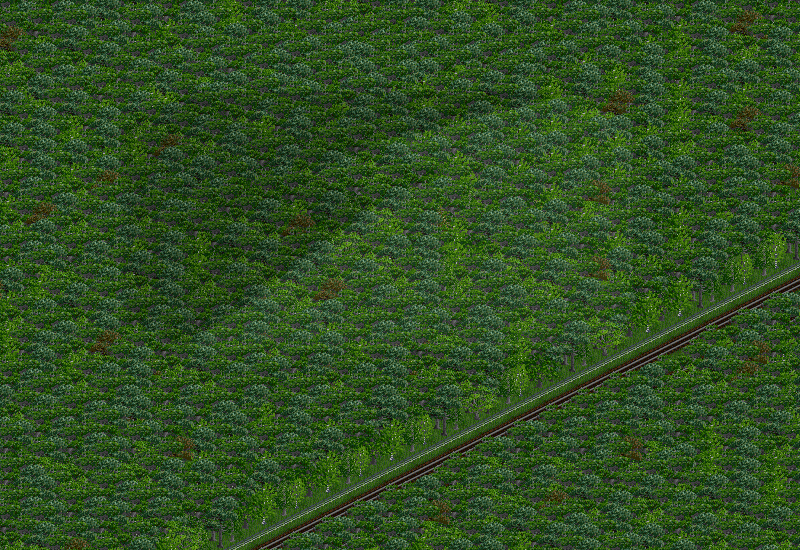 by LaChupacabra
5. Areas of eternal forests
This is part of a larger idea where the heightmaps / scenarios would consist of layers including:
- terrain height (currently the only editable layer)
- water depth (it can be a common layer with the terrain height, where the water having a blue shade)
- type of terrain (moderate, arctic, deserts - the possibility of mixing different substrates, which would be available in the new climate: mixed)
- rivers and canals (recreating them from scratch to update the map is a nightmare)
- roads
- cities and buildings
- enterprises
- objects
- forests, including:
- areas where trees can grow - they are indelible like the type of terrain, outside these areas trees would not grow or would grow reluctantly and would disappear more often
- forested areas
Many of these points are possible today thanks to the map generation tools by McZapkie. Unfortunately, this is a patch that requires compilation and is not particularly easy to use. This way of saving developed height maps and scenarios would be very useful when creating new maps, and even more so when modifying existing ones, which sometimes may require changes to be able to play them at all.
In the case of trees, such permanent forest areas would be usefull for maps, where the author might wish to map some specific area or highlight the features of part of the map.

Re: Some ideas about trees

by 2TallTyler
I like a lot of these ideas but lack the knowledge to put them in the game (yet).

Shaded trees on hillsides is a feature in the Citymania client, which unlike JGR is fully cross-compatible with vanilla OpenTTD including multiplayer games.

Re: Some ideas about trees

So there is some shadow of hope.

I have a few more small ideas, I will add them soon

by LaChupacabra
6. Forests around Forests (enterprises)
Or forests in forests. I think it might make sense if trees were more likely to appear around forests - enterprises. And likewise, if forest-enterprises would appear only or mainly where there are larger clusters of trees.

7. Trees less often planted on the south side of roads, tracks and other structures

by LaChupacabra
7. Trees less often planted on the south side of roads, tracks and other structures
I like the game with the view of trees, but often, even while watching the game, I have to turn off their view, because they even completely block the view of roads, tracks or vehicles moving along them. I think a good effect could be achieved by reducing the likelihood of trees effectively appearing on the south side of any objects that might obscure.
Solution details:
Version 1. Version 2 Current 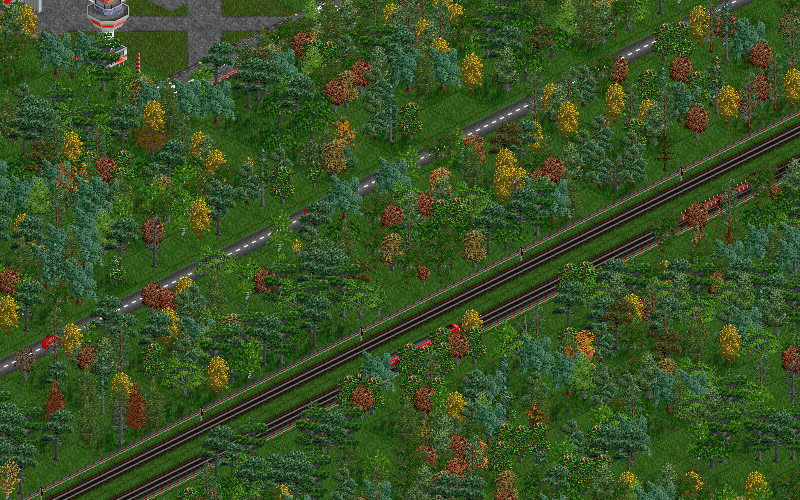 After the proposed change 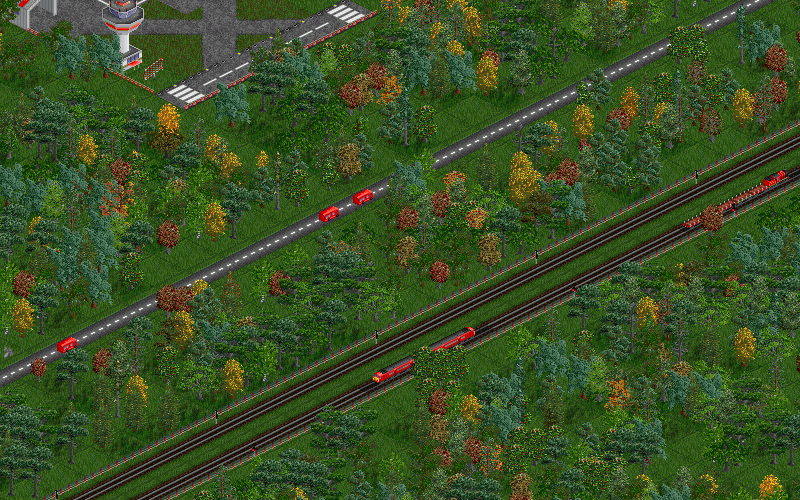