Posting these so I remember them. If they're worth discussing further, they can be discussed in the usual places...

Ponies that we might actually get Ponies that are done (yay). If I credit wrongly, send me a flame

Ponies that are too silly / ruled out / unlikely / probably too much work
- 'fields' around industries. Work started by frosch. Got stuck. It's quite complicated, might be too much work for too little benefit.

- water types, or something similar, so that something interesting can be done for gameplay in respect of adjusting ship speeds on rivers, canals or open water etc. (might be an extension of rail / road types)

- resurrect 'growth' patch idea so roads can be snowed over, blown over with sand, etc. To be cleared to varying degree by vehicles, so snow ploughs become possible. More snow = reduced vehicle speeds. If properly combined with road types, 'maintenance' also becomes possible, as tile could be 'maintained' to a lesser or greater degree, slowing vehicles. 'maintenance' level to be restored by engineering vehicles.

- articulated ships, or a hack in similar fashion to aircraft, using another following sprite to hold cargo. Typically 2 cargos would improve ships. More aren't necessary. However consolidating cargo capacity could be fun. E.g. capacity 100t, to be made up of cargo A, cargo B. So 10t cargo A, 90t cargo B, or 50t each, or 70t cargo A, 30t cargo B, any combination really. Could be implemented as an invisible following sprite, or as a wake sprite. Hmm just how performance-draining is the ship pathfinder anyway? Proper articulated ships would be good for some limited cases, but not actually necessary.

- 'ford' tile to let vehicles cross small areas of water (limited to 'n' tiles), has to be built explicitly, like a bridge. Is it asking too much of the graphics engine to draw water over part of vehicle sprites? Probably.

- extended industry variable 68, ability to get values from the registers at other industries. DaleStan explained to me a while back that trying to get at properties of industries might be a pony too far if it's for *any* industry on the map... but var 67 / 68 can check properties at neighbouring industries of type n, so wondering if value of arbitrary property x could be got for nearby industries of type n? (This is thought to be possible, but generally not likely to happen).

- cargo arriving at a station distributed to industries in catchment area using round-robin, instead of nearest neighbour. Stops all cargo being delivered to one industry, preventing certain annoyances. Rubidium tells me it would be inefficient performance-wise (and therefore is not going to happen - seems reasonable, but I thought I'd mention it).

agree on 2nd point, im annoyed that everything goes to industry closest, even though i got 4-5 same in the cachement area that will disappear due to no-supply issues
Screenshots topic
Scenarios&Heightmaps
Top

andythenorth wrote:- seriously enhanced GUI for newgrf parameters. NFO to specify various strings: help/label for each parameter, string for each combination of values. Possibly support drop down menus so users don't have to add up. Frosch mentioned something similar to this.

Well, I have been enviously watching the AI configuration for - hmm - one year?!
From the various paper notes on my desk I brewed about 200 lines of pony manual: http://devs.openttd.org/~frosch/texts/StaticGRFInfo.txt
Maybe some sleepless nights resulted in something usable.
Disclaimer: I am better in talking than coding

While adding static information, please add a 'keywords'-like field as well, so NewGRFs can be ordered on topic in the NewGRF GUI.
Top

It's an awesome implementation. I was wishing for something like this but had no idea anyone was working on it. One more pony running free 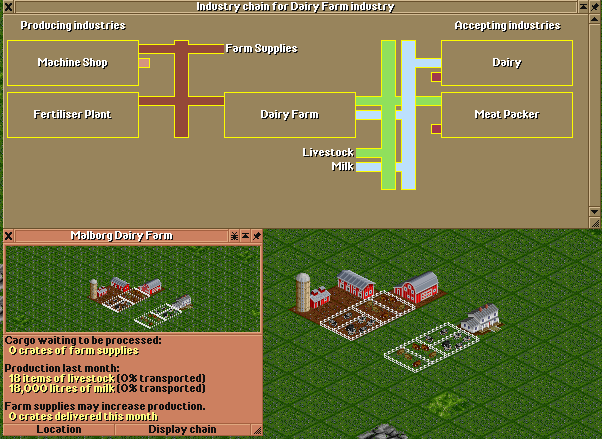 Thanks for pointing that button!
Correct me If I am wrong - PM me if my English is bad
AIAI - AI for OpenTTD
Top

- 'ford' tile to let vehicles cross small areas of water (limited to 'n' tiles), has to be built explicitly, like a bridge. Is it asking too much of the graphics engine to draw water over part of vehicle sprites? Probably.

It is possible via hackish railtypes!
Just code stream as railtype - ford will be level crossing.
It is almost possible with nutracks - there is blue track planning! (see attachment)
And it is possible to use stations and waypoints as carriers of additional eyecandy.

This will make using newgrfs that have parameters *way* better. frosch wrote spec, yexo and rubidium made the commits 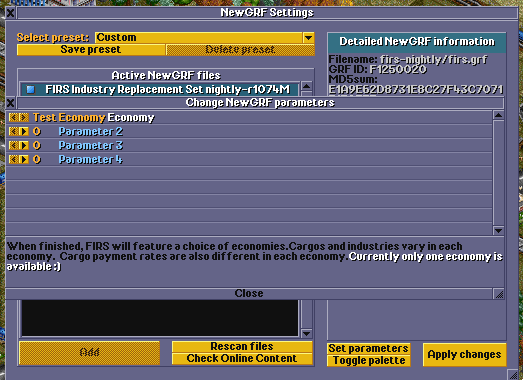 OpenTTD r21240 added smoke support for road vehicles and ships. One more pony set free (this one by Hirundo)

HEQS 0.9.5 adds support for this feature.

- multistop docks "Peter1139 has a patch for that"
- flat docks (for use with rivers / canals)
- 2-tile locks OR navigable river rapids
- diagonal rivers and canals
- enhanced newgrf control over industry text window, specifically, removal or replacement of 'cargo waiting to be processed, which inappropriately assumes a specific implementation of cargo processing in the newgrf, which is counter to the routinely agnostic approach to how a newgrf will implement specific features
- newgrf stations with multiple tiles that can show multiple waiting cargos, with some algorithm to distribute the cargos to tiles in descending order (much harder than it sounds as not every newgrf station tile can or will show cargo)
- station tiles that can be built on corner coasts (can strictly be done with newobjects already, but eh)
- consist management for trains, modifying the consist of multiple trains at once, using $some group mechanic (as yet undefined)
- nml station support http://dev.openttdcoop.org/issues/2746
- GS Area Control https://wiki.openttd.org/Frosch/GS_Area_Control
- improved map generation in sub-tropical climate
- port to SDL2 or OpenGL (to restore ability to use 'full animation' on retina OS X platform

andythenorth wrote: - multistop docks "Peter1139 has a patch for that"

AFAIR, also richk had a patch for that, or had been working on a general implementation of "new docks/harbours".


andythenorth wrote: - flat docks (for use with rivers / canals)

Already existing in TTDPatch >10 years ago!

Nah. At least locks visually *lifting/lowering* ships (already existing in TTDPatch >10 years ago!). And Peter1138 has a patch for that (since years!).

No need for that. Since >5 years there´s http://www.ttdpatch.de/grfspecs/m4nfoMa ... nsTut.html (although there´s no desire for anyone to code new decent station sets)


andythenorth wrote: - port to SDL2 or OpenGL (to restore ability to use 'full animation' on retina OS X platform

No need for that. What sane person would use a mac these days?

Apropos, you forgot "holds for ships to carry different cargo at the same time", as had been discussed w/o end in recent years. Other than that, auspicious list. Chapeau.

- multistop docks "Peter1139 has a patch for that"

Good idea, but together with finite number of ships docking (there is already patch for avoiding collisions, but it does work only for running ships).
Ships are OP in comparison to other means of transport, there are no traffic jams, you can have infinite pile of ships docking to the one tiny pier.
On the other hand, this pile is annoying and hard to manage, if you need to seek for ship which is partially loaded under heap of empty ones.
Top

McZapkie wrote:Good idea, but together with finite number of ships docking

Yes, that was implied, but not stated

Peter had a patch providing something like 3 stops per dock, and multiple docks per station.

IMHO this would make a big difference to the OP issue with ships (which actually makes them quite boring for gameplay as they have ~infinite capacity).

andythenorth wrote: Yes, that was implied, but not stated

Peter had a patch providing something like 3 stops per dock, and multiple docks per station.
IMHO this would make a big difference to the OP issue with ships (which actually makes them quite boring for gameplay as they have ~infinite capacity).

Today I wake up morning with ready idea in my mind: dock and buoys capacity:
viewtopic.php?f=32&t=75876
Top

Ponies that are done, in no particular order

Pony list, 2021 edition, in no particular order It's remarkable how many ponies get done, thanks to every contributor