I would die to get those.
real big hit it would be.

if nothing more, than signals bridges..
I would even like it if the bridge would have the same signal "logical" all the way as the first signal it has.
annoying that only 1 train can go on a bridge at the same time.

as for diagonal bridge and tunnel.. would be just awesome, but it would require new graphics, new tiles

still, i was thinking i ask opinions on how feasable would these be, anyone else would like tunnel accepting more than 1 train, same for bridges, and hows about diagonal tunnels/bridges.

it would be lovely lovely.. just as a major improvement as the diagonal track under a bridge.
gotta love that too. Y shape bridges do exsist in real world, and OTTD could use those too.

2457 wrote:if nothing more, than signals bridges..

i mean it should be a default feature, not a patch that has to be compiled.
so everyone would have it.
like PBS signals now. its included in every release.

and btw, i given some options to vote, so please do so.
The Prophet -thx Pikka-
Top

2457 wrote:i mean it should be a default feature, not a patch that has to be compiled.
so everyone would have it.
like PBS signals now. its included in every release

Well, the patch itself is quite buggy, I'm not sure I'd want it in my release.

I did, I voted the "I HATE TO VOTE" category.
Top

yess i seen it has bugs

i would ask the developers to make it bug free and include it, lol.

but, who the hell em i to "order a feature" on my own.
was thinking maybe those who like it vote to YESS, then if a large number of peeps like the idea, it may get done by someone from somewhere, or something like that.
or so.

I'm currently rooting for diagonal roads and water tunnels, so of course, diagonal bridges/tunnels would be more than welcome!

CazadorSirenas wrote:I'm currently rooting for diagonal roads and water tunnels, so of course, diagonal bridges/tunnels would be more than welcome!

I'd also like diagonal roads, although this would need a special implementation for the buildings.
NewGRFs by Tony Pixel :
North American Passenger Railroads
Not Enough Subways

Diagonal bridges.. oh that would be FANTASTIC!

It's always better with images: 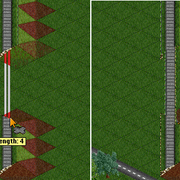 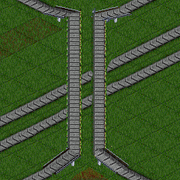 I would realy like diagonal bridges and tunel, not shure how tunels should work, but bridges are pretty self explanatory, and the singnals on them would be realy good, but again, how do you want to place thing on something you don't see? It would need a undergroung camera. And that would mean, that if you can go underground you could build there.
Top
Post Reply
9 posts • Page 1 of 1