Hello I am new to this game.

I have loaded a few grf's and played the game for a while.

now i want to load more grf's into the same game.

I am also uploading the grf screen during gameplay. 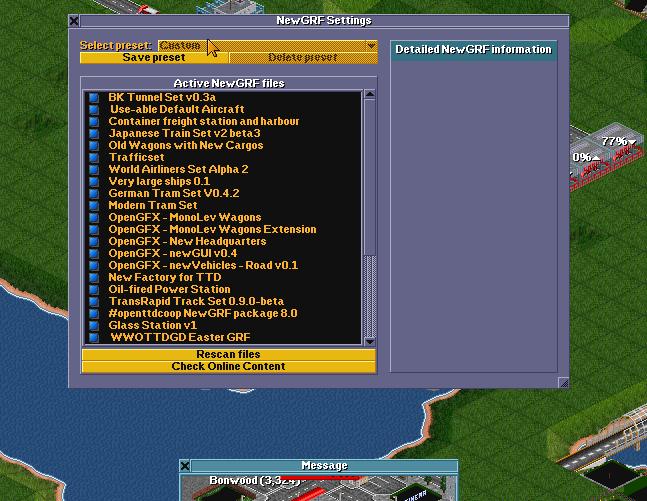 Please attempt to use the search button. This question has been asked many times. The functionality to add new GRFs 'on the fly' was restricted in recent releases to prevent a plethora of posts about 'bugs' when it was in fact people messing about with adding and removing GRFs in game. However, it seems to have just replaced those posts with a thousand "Why can't I add new GRFs ingame any more?" posts. Ah well.

Well this is something that could have been predicted easily, isnt it? taking away a feature that is existing since quite long will always lead to a lot of questionning... and is there really less wrong bug report?? (who knows about gamelog command before reporting a bug??)

Anyway, i don t want to open a debate about this feature...cause it is for sure good the way it is (now people reporting having bugs with a messed grf canno t claim they didn t know about the warning).
I just really think that we all have to change our attitude with some people asking some question about it(and others things too). The most of the times people get a "use the search function" answer. The few that are actually doing the search must now swim in a sea of thread about changing grf and might not even find the answer since most of them have a "search function" answer....

So let s try to make this post usefull, and actually containing the answer :

Open your ottd folder, find the .cfg files, open it in a text editor, look for a line written : scenario_developer_tools: false. change "false" to "true" , save it and your good to go(you can now change grf midgame, andyou are warned to not report a game where you modified/added a grf or even just it s parameter,)

Edit : change proposed by yexo (i was not sure this one would allow change midgame, so thanks for your input)
Last edited by romazoon on 14 Apr 2011 19:48, edited 1 time in total.
Top

Possibly at the bottom of the newGRF window you could place a few lines of text saying something allong the lines of "Modifying active newGRFs in game is not possible and produces undesired effects.", that could reduce the number of complaints on this issue.

This would make it clear this is intentional and the functionality hasn't simply been changed to a different menu for people to ask about and such.

Edit: you could also add below that "please change newGRFs on the main menu before starting a game" or something along them lines.
==Flickr==
Top

your right Lawton,
i forgot mentionned how hard and unclear it is how one should use the grf(well when the scenario_tool is set to false there is only the right way to do, but you still have to find it out). i personnally learnt over my mistakes....(the right order of grf in the list, setting grf before generating game, or before opening scenario editor, and of course changing grf midgame... )

Also, i have no idea where to look for all the commands linked to use or change of grf ( i know gamelog, and enginereset cause i actively read this forum but that s it, is there any other usefull commands?)

So it s time to make a tuto about newgrf! or is there allready one that i missed ?

Anyone volunteering that know all about newgrf??
Top

romazoon wrote:Also, i have no idea where to look for all the commands linked to use or change of grf ( i know gamelog, and enginereset cause i actively read this forum but that s it, is there any other usefull commands?)

You can also read in the wiki: http://wiki.openttd.org/Console

Or if you ever have used cmd or bash or other some other terminal/shell, you'll know that the command 'help' will give you pointers as to get started. In OpenTTD 'help' tell you about the command 'list_cmds' which list all commands. All this information you get in OpenTTD without reading the forums or visiting the wiki. Just say "help" and you get it

Actually in OpenTTD it even tells you when you open the console that you can use the "help" command to get help, so you don't even need to have used a terminal/console before.
My OpenTTD contributions (AIs, Game Scripts, patches, OpenTTD Auto Updater, and some sprites)
Junctioneer (a traffic intersection simulator)
Top

Not sure if this is the correct thread. I have just started using OTTD 1.1.0 having previously been a few versions back. (~1.0.0 ish). I find this new idea that GRFs cannot be changed in game incredibly frustrating. I completely understand the reasons why, but I think it should be left to the player's discretion.

I have played all of my games in the perfect knowledge that changing the graphics mid-game can mess it up royally, but I wish to take that risk. The feeling of creating a 2048x2048 map of X, and implementing half of the country's rail network, only for a better version of Y train set to be released and not be able to put it in the game, is ridiculous. In my 4/5 years of playing this game, I have yet to run into a fundamental error when changing NewGRFs in-game (touch wood),and now I find it ridiculous that it is now forced upon us not to.

Surely it is those people who ignore the error message, encounter a problem and then kick up a fuss on here that should be penalised, not those who heed the message and accept the risk involved.

SwissFan91 wrote:Surely it is those people who ignore the error message, encounter a problem and then kick up a fuss on here that should be penalised

SwissFan91 wrote:I completely understand the reasons why, but I think it should be left to the player's discretion.

It is left to the players discretion right now. You can read how to do it in this very thread.
Top

SwissFan91 wrote:it should be left to the player's discretion.
[/rant]

well, it is! if you cannot read, it's not our problem!
[/rant]
You might not exactly be interested in Ferion, but if you are, have fun

It never went wrong with me when I add newGRF's to my games.
I accepted the warning.
Visit my screenshot thread--> http://www.tt-forums.net/viewtopic.php?f=47&t=54118
If you want to have a go at War Thunder, PM me, I have an invite code.
Top
Post Reply
11 posts • Page 1 of 1