Finish sentence: "Locomotion will be ...

Presently i vote for "the best" option.
Because i cannot believe CS would bother to do this whole thing again and not strive for the very best transport game. No way.

Yes it does look pretty good - and no doubt some people will produce some sort of ttdpatch like thing for Locomotion, if it lacks the features we enjoy in ttd.

However, I'm sure you all noticed the graphics - looks exactly like Rollercoaster Tycoon. Now I know this game is more about gameplay than graphics or other fancy stuff, but jeez man its 2004! Ever heard of 3d? or at least make it a modern-looking 2d game. There is even an opensource clone being developed in 3d, and this guy has got far more resources than those guys. I bet A LOT (well not me) of people will be turned off this game from its antiquated aesthetics
Linux Registered User #350204
--The Shoes of the Fisherman's Wife Are Some Jive Ass Slippers
Top

If this game was in 3D, I wouldn't even consider buying it.

3D is soooo overrated. Give me a nice looking 2D game anyday... (now whether LoMo will be one, we'll see...)
Top

Exactly. I don't feel 3D graphics are suitable for games of this genre.
Top

Real 3d is bad, I always loose more time trying to get the right view on my tracks or the things I want to do, Fixed zooming like in TTD is great
Well, back to work, lot's of it in the near future
Top

I agree with that. I have played Trains & trucks tycoon (3dTT), and i don't like to adjust my view all the time.
Top

dunno, we will see
.
Top

i downloaded railroad tycoon 3 demo and as the name sort of suggests, its in full 3D;

TTD vs RRT3
the graphics in RRT3 are very nice, all the trains are detailed (except for one angle where the camera follows the train and you can adjust the camera angle inside the train - messes everything up)
i find RRT3 is lacking in gameplay, sure it looks great and seems a little more complicated (some people may like that - but its complexity gives an edge to the game - unlike TTD where everyone is masters making money

It will be worse than TTD.

One, I hate the graphics. Two, it takes after RCT(2)s style of track building. Three, it will probably be unpatchable and won't support replacement graphics.
<!-- End Of Post !-->

Far too early to say. Apart from a brief overview and some screenshots which may or may not be representative of the final version (but probably not) you can't judge something on this little bit of information.

Also worth bearing in mind that careless talk can cost... games developers do monitor the forums and if they see something being dissed before it's even released that's not exactly the motivation they need not to mention giving the publisher second thoughts.

If I were Chris Sawyer and I'd logged on to this thread to see one of the options as "Crap" I would not be very happy. By all means offer feedback, but keep it constructive when next to nothing is still known about the product...
Chief Track Welder
Top

My vote is: Crap.

Why crap? Look at that crap graphic. Look at crap building.

The best is TTD, look BETTER than CRAP Locomotion.

Why crap? Look at that crap graphic. Look at crap building.

The best is TTD, look BETTER than CRAP Locomotion.

I refused to buy it. Plus, THIS IS NOT JOKE!

_RaK_, will you please be more specific? What"crap building" are you referrring to? Looking at the screenshots, I think the buildings look fine. They look realistic, not too cartoonish and while they're not extremely bright, they look like they belong. They look a little odd on those steep slopes I will admit, but it's something I can live with. I'm sure it'll look much better once it's completed.

The graphics are way beyond "crap", I honestly can't see how you can say that. TTD has a loyal following, and always will. That said, I believe Locomotion has the potential to become a classic like TTD and RCT. We should be happy this project's going through at all. Above all...LET'S NOT PASS JUDGEMENT ON THREE DAMNED SCREENS!!!!!!!!!!!

The game looks fine to me, it looks like it'll be excellent, the graphics look A LOT more realistic than TTD's. So there's only one airstrip...Airports to-scale would be huge. Who gives a damn if it looks like RCT...People don't complain about the RCT graphics do they? LoMo has the potential to be an excellent follow-up to TTD. Can we expect it to replace TTD? No - TTD is a classic, and that can never be replaced.

How in the Hell can we judge this game when we've only seen 2 planes, 2 trams, 1 bus and one Bloody train!?!

Have Faith Young Grasshopper, Chris will bring us a quality title, I'm sure of it. In the meantime...STOP YOUR BITCHING!!!!!
Regards,

He's absolutely right. If I was a CS, or a a Patch Team Member, I would've wanted to kick the s*** of all those criticaster waaay back.
If you don't have anything nice/useful to say, SHUT UP!
I heard the stories that they tell of how they labored for this company which sold it's soul to hell

Yep, it's too easy to criticise - those doing so should consider how they might feel, if they posted details of something they were working on and possibly quite proud of, to be greeted with cries of that looks like "crap".

If you don't like what CS is doing with TT2 then go out and write your own programme. Oh and see you in about 5 years then!
Chief Track Welder
Top

"locomotion will be" Pure crap

I think we need to wait until we get more info on things like the game features etc.
I darkened and resized the 3rd picture what do you think? 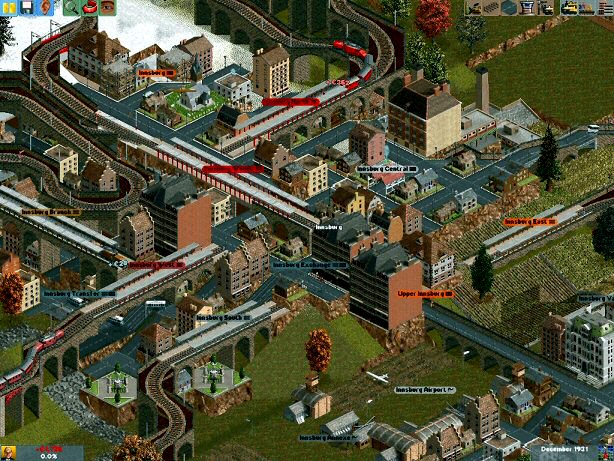 It adds far more colour to the game and certainly does the graphics more justice than the 3 original screenshots. I think there would be less negativity about the game if the 3 screenshots had looked like this in the first place.

Dan wrote:I think we need to wait until we get more info on things like the game features etc.
I darkened and resized the 3rd picture what do you think?

looool, very nice ... it looks much more better, anyway trains are still not nice (and I hope CS will change that)

@gg190, I thit will look as did Dan because RCT looks nearly the same
what are you looking at? it's a signature!
Top
Post Reply
51 posts