Hints and Tips on playing Locomotion (No off-topic posting)

I think everyone uses this method allready.
If you have 20 or more trains on a route, you then only have to place an extra signal to the station and you can add some trains more.
In this way you have always a loading train on a station.
-
-
39 years experience with trains and still driving.
-
-
Top

Well done wilson i was wondering when you where going to spot that out!
lol that is a very good idea! bravo!
TOM!
Top

Don't Be Your Own Barrier! Build your routes underground if you want the city to grow.

I had a passenger and freight terminus built so that they cut directly into what was once a busy city thinking that it would allow the city to grow further which means more money for me. After a number of years, I noticed that it wasn't growing and was clueless as to the solution. It took me a long time but it finally clicked in my head that I was the cause of this barrier....

Underground building is the last resort, when there really is no other option, I sometimes use it
Well, back to work, lot's of it in the near future
Top

It should only be done if you have the cash; and arn't going to be botherd looking at that section of track (mind you trains do go uphill slowly)
Top

Make the last set of signals just befor the station a bit longer than your biggest train with a siding behind it (if you're track is used for more than one purpose). This alows trains to Q off the main line and stops holdups

I'm Back after my long time off, I have now worked Google sketchup to assist me with mod creation so look forward to brand new professional looking mods
Top

i have a somewhat other style on my underground stations...
this makes it easy to build, and is usually built when the citys are HUGE yet... this design will also make sure u get the most out of the citys within the catchment area... i know this can be expanded with bus-stops, but imho this isnt too efficient.

it can also easly be modded to a ro-ro

also, for maximized catchment you could add 4 tiles of track before the sation start 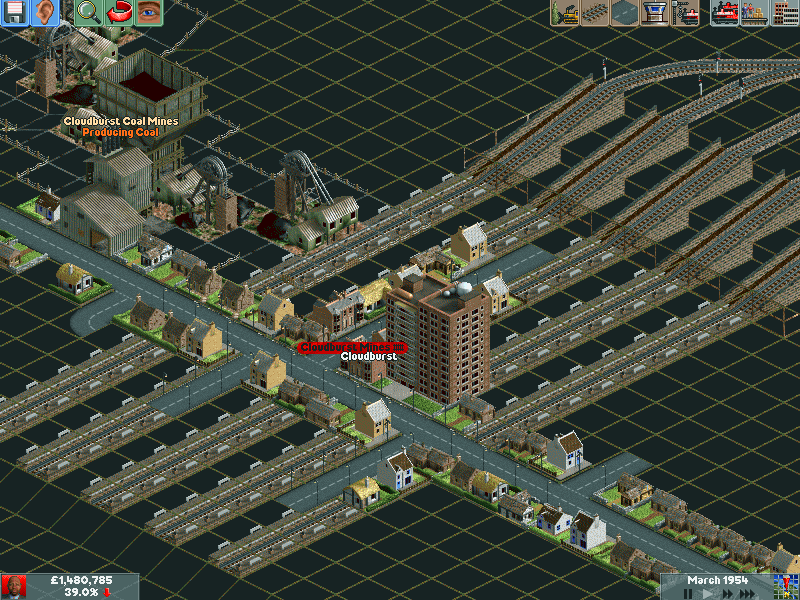 Tip1: When on a scenario like Cylade Capers or Dodecan Islands, it's sometimes needed to build overseas, but even a brick bridge over a medium distance costs A LOT. Like 12-15K a section for Capers. A much cheaper method would be to raise the bottom of the ocean to the top and put your rails there. About 3K for each raise, 3 raises to get the bottom to sea level, and 1K for each rail section. That would be about 10K a section, saving you at least 2K. That doesn't seem much, but I got 3 trains going instead of 2 in the very beginning by using that. And there is another added effect, which brings us to the next tip...

Tip2: Have lots of money and want to screw over your opponents? If they have a ship, trap it by raising the land around the station when it's loading. It will never get past that.
Top

In the British scenarios:

Step 1: Build Line from London to Coventry, and run a passenger train on it.

Step 2: Add second line (but do not link both together - yet) and extend it to Birmingham coal mine (I suggest using the S curve by the brewery, and go right into the corner). Run your train. You may fnd you have to add a 3rd platform track at London to allow the catchment of the power station.

Step 3: Link up both lines, making sure to connect up the 3rd platform track.

Step 4: Add a second Coventry platform alongside the current one by demolishing the houses next to the current one. Link up to the mainline, and demolish the old platform (but not the track), and make this the UP line. Complete track & Signalling.

Step 5: Extend mainline up to Manchester. Add a passenger service.

Step 6: Extend mainlnie up to Carlisle Chemical works, and run train to London. You may need to add a bus stop to get the factory in the catchment area.

Step 7 (If possible): Extend mainline near chemical works, making Carlisle station a spur, and extend it to the Oil Refinery. You can then add goods trains to the route, running to London.
Top

To make big stations put some one stations track next to the station then buil then remove the one stations
Something goes here, hell if I know.
Top

Most people know this, but if you build a station with the entrance/ exit line perpendicular to the platforms then you save space and increase efficiency
May the force be with you.
For little boys, three things reign as supreme attention-keepers: tanks, heavy construction equipment, and trains, we all know why where here.

"Computer games don't affect kids; I mean if Pac-Man affected us as kids, we'd all be running around in darkened rooms, munching magic pills and listening to repetitive electronic music."

I'm not sure If this has been posted yet, But a way to get money fast is to set up a rail line within three close cities and then, when you have the money, build an airport in two different cities and then build a plane to go between them. After that you should get lots of money, and then you can build another airport, and build an airplane to go from a city to another, and so on. I got 8 billion dollars from this technique and it should work on any urban map. 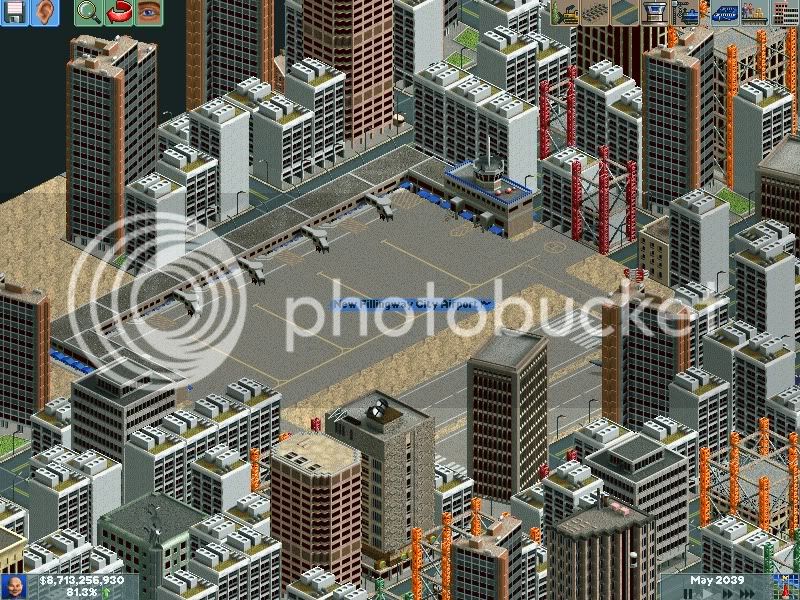 Something I've noticed to be a major setback that people neglect is stations on main lines which require trains to stop and 'full-load', thus holding up the que.

I've developed this station style, which - as long as the commodity can support the initial cost - will see your rail network run ahead of schedule for endless years to come.

Wow, I've never really thought of doing something like that. That just looks like it has a nice flow of things. Nice one.

I too thought this would be an issue, however, it is not. I will try to create a video of just how effective this system is to show you all that you only need 3 platforms to effectively service up to 20 trains simultaniously.

The biggest trick to solving your passenger train issue is to not run passenger services like they would in reality. Eg. 3 Stations "A, B & C" - In reality a common setup would see a single train service from A, through B, to C, and then back through B to start again at A. After a period of time, given population growth, this one train cannot effectively transport the commodity as quickly as it arrives. So, the common mistake people make is to increase the number of carriages, or make another train running the exact same route.

This is wrong on many levels.

The correct way to service these 3 stations is to link them individually. Run a single train from A to B, and a single train from B to C. Having only 2 stops means less chance of having too many trains fighting for one peice of track. To further my example, consider we have 10 stations on a single line, and we have 9 trains running the full length servicing all stations, now we let a further 10 goods trains share that line. If grid lock occurs, all of those passanger trains will catch each other, and be servicing each station right after the other, chances are they'll pick up 5 passengers tops, and run at a loss.

The best way to work out how many trains to run on a single line is to run half the amount of trains to stations - rounded up to the nearest number,

I hope this helps relieve the unwanted hair pulling in route structure and service.

FSF, that is a really great station plan - I've always had problems with introducing goods stations off mainlines, and have experimented with various variations on the ro-ro model, but that looks like a very good way to do it, and get two way functionality.

Of course the problem is in a real scenario you don't too often have the room to build the loops and such.

As for passengers, I use through stations quite a lot with good results, but generally only on passenger only lines, or where mail is the only freight. The problem comes when you have a number of trains operating at different speeds along a line.
Soccer Mad Boffins
Watch my YouTube Channel
Top

However, I was referring to the theory which G-TANK-G proposed, that; mainline passenger services using cargo stations would cause too much congestion - in relation to my mainline station style. Running a multiple station service works well on dedicated lines, but dedicated lines costs too much time and money, by the same token - they take up a lot of space that isn't being efficiently utilised.

I don't disagree, but when the game goes into hyper town building mode you can make a lot of money by building passenger only lines through the densest areas, you only need to put a station every few squares to make a lot of money running EMUs. The returns on building a dedicated high speed line can be very good too. But its true that neither of these lines are feasible in the early stages of a game.

Of course it would all be very different if you had to pay your infra costs in Loco, then you really would be maximising what you could get out of each piece of track!
Soccer Mad Boffins
Watch my YouTube Channel
Top

I was just saying how I solve that little issue really.

I had a little go of what you've said FSF. About the half of the trains to the amount of stations. It was very profitable i must say. Its very difficult to keep that huge space between the trains, but removing a few signals making huge sections soon solved that.

So, cheers for that small tip

No problems, glad to be of assistance.
FirstSoloFlight
Top
Post Reply
96 posts