I do/did have one, somewhere. I don't think it'll be on any server any more, though. Not sure where the physical CD is off the top of my head.
Owen Rudge
owenrudge.net | Owen's Transport Tycoon Station | Owen's Locomotion Depot | The Transport Tycoon Wiki
Top

I've made a standard ISO, you can download it here:

I hope it will work with your PS emulator, because it doesn't with mine. I'm currently using ePSXe and when I run it from (any type of) cd image it just won't start.

Doesn't work here, it gives me a message: This plugin doesn't support ISO-9660 images. Maybe you could make another iso that's different type?
EDIT: I tried to open your iso with MagicISO and it didn't work. It opens other psx isos fine.

I will, but currently can't, because I won't be where my TT collection is until Saturday, maybe even until the weekend after.

What emulator do you use? The thing is, as I mentioned, ePSXe couldn't run it from any kind of cd image. So maybe there's some nasty copy protection on the cd-rom. But I'll give it another try anyway.

What emulator do you use?

I use ePSXe and PCSX, this PCSX gave me the error message

But I'll give it another try anyway.

Make sure you can read the ISO with a ISO reading program. If it's readable, I'm sure it's useable with an emulator. And btw, I'm talking about a thing I don't know anything, so..

This took aaaages to make... first I had to work out how ePSXe is key-configured... then guess how TTO actually uses the controller ....
I kept trying to use the mouse 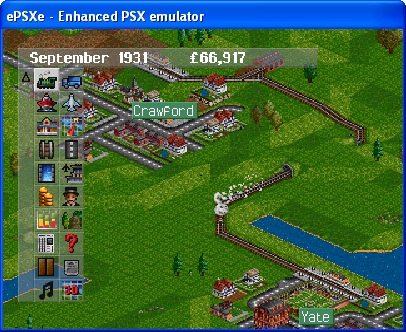 I'm currently trying to make another ISO. However, there seems to be a problem concerning the disc layout. I'm not a specialist in ISO making, all I can say now is that until now, any ISO maker I have used complains about the multisessions... we'll see.

I came across a sega saturn version of TT! I never tought it was on a saturn too?!

Mr. X wrote:I came across a sega saturn version of TT! I never tought it was on a saturn too?!

About the PSX version: ISO turned out not to support multisession discs at all, so I decided to make a bin/cue image instead. It works fine with ePSXe. Here you go:

Alright, to all those who haven't downloaded the bin/cue image yet but are planning to, please do so within the next few days. I'm going to have to remove the file from the server for space reasons. Thank you.

Lord wrote:Alright, to all those who haven't downloaded the bin/cue image yet but are planning to, please do so within the next few days. I'm going to have to remove the file from the server for space reasons. Thank you.

Hi
Could you upload this file to rapid share or give some link?
Thanks.
Top

micx wrote:Hi
Could you upload this file to rapid share or give some link?
Thanks.

Thanks a lot!
Even if it is not so worth playing (and paying for it), it is a must for TTD fans.

Hope for a download for the saturn version too.
http://members.fortunecity.com/gamesart
"If no one is a fool I am also a fool." -The TTD maniac.

athanasios wrote:Hope for a download for the saturn version too.

We should all keep those rare isos in our collection. They are the history of our favorite game. Hope they do not get lost by time. Lets download and preserve them even if we do not play them.
http://members.fortunecity.com/gamesart
"If no one is a fool I am also a fool." -The TTD maniac.

Oh.. Does it work for you? I downloaded it about three years ago, but did not manage to launch it. What emulator have you used (pity, I no longer have BIOS I used in 2004)? Not that I want to play it, my PSX release (I'm one of quite a few people who own a legitimate copy) wasn't used for last 15 months or so. Well, I just don't see brilliant career for Saturn port

athanasios wrote:Lets download and preserve them even if we do not play them.

I apologize for the punishment I gave your servers there, Lord. Those who would like to avoid performing that punishment can find those files at the other end of these ed2k links:

It won't be as fast as a direct download, obviously, but if you're just out for the purpose of getting the files, it should be quite fast enough.
To get a good answer, ask a Smart Question. Similarly, if you want a bug fixed, write a Useful Bug Report. No TTDPatch crashlog? Then follow directions.
Projects: NFORenum (download) | PlaneSet (Website) | grfcodec (download) | grfdebug.log parser
Top

This is such an awesome game

Firstly, This should be in a seperate forum altogether, wouldnt you agree?

Ok, I'll start by saying that I bought this on ebay for £3 and it was worth every single penny.

The 3d mode itself is worth the purchase, not to mention being able to watch the trains going along the track

The AI is quite bad. Not only does it do the same stupid overly-complex routes as in TTO, they will use full load on the wrong industry, trying to get coal out of a power station (on full load). Not only that but on occasions they will build airports seemingly in the middle of nowhere, and use vehicles when really they should use trains instead (because vehicles are sabotagable in this; anyone remember the level crossing exploit? its in this game too).

I've never seen AI use ships EVER... and theres so little water most of the time that its kind of useless.

As for the vehicles, there are now about twice as many differnet kinds, although most are clones of others with +5MPH/More Expensive.

Although the graphics are a bit blocky, some industries look quite nice, I like the power station quite a bit.

The maps in themselves are small, i'd say they were 96x96 or maybe smaller/bigger. You can only have 3 computer opponents at one time and the max station you can build is 4x5 (or 4x4?).

Because the maps are small, the industries seem to produce a lot less then the TTO counterparts. Also, the economy is officially BROKEN.

By 1970-1980 the economy goes insane, with trains costing millions etc etc. I havent gotten to monorail yet sorry, but I assume it exists.

But yes, it is a fun game and could certainly do with some sprucing up. I think the next OpenTTD game should be a bit like it. (With the 3d Graphics and stuff)
Top

The difficulty options are exactly the same I think, and when you create a character you can build a HQ, and give your manager a choice of 5-6 faces.
There are no shares, multi-signals or # railway thingies (because those are in TTDX, just thought i'd clarify).
Top
Post Reply
147 posts