The only safe method of changing newgrf within existing scenery is to create new scenery.
Therefore, we need a method to instant generation of such scenery (with a little random effect).

My rough attempt to reproducible map generation is based on two issues:
1. generation of rivers where they are supposed to be,
2. importing landmarks (cities, objects, signs, industries etc) from external txt file.

Ad.1.
Forcing rivers to flow along adequate paths is simple - just engrave riverbeds in your heightmap.
Because 16 height levels are too small to precisely reproduce river valleys, you need to have additional data.
Even with more height level available now, river valleys are usually not well defined in original heightmaps.
If you are creating real based map, you can use GIS date for inland water, it can be found for example here:
http://www.diva-gis.org/gdata
Now we can use GIS data, if converted into bitmap, to apply as mask layer and decrease slightly brightness of the original heightmap.
Raw data of combined rivers and inland reservoirs, converted to bitmap, looks like that:
http://149.156.194.203/~mczapkie/Train/ ... lwater.png
Before you can use it to engrave riverbeds, you need to thicken rivers, because one pixel is to small to make functional riverbed.
You can use erode or dilate filter (available for GIMP and other graphic editors), depending on colour of water and background.
Dilate and erode filters are also great for removing discretisation noise from height bitmap.
Height bitmap before riverbed and lake beds engraving:
http://149.156.194.203/~mczapkie/Train/ ... 96_16c.png
and after:
http://149.156.194.203/~mczapkie/Train/ ... nd2048.png

By the way, rivers in valleys are, in my opinion, better that plain ones, because:
1. valleys itself add a subtle structure to the landscape (landscapes based on real heightmaps have usually flat lowlands due to discretisation threshold),
2, bridges over river in valley looks (and works) much better than "bumpy" one,
3. it is possible to build dock without making heap at the river bank (which is barely possible if basecosts are set to prohibit terraforming).

Even if we have heightmap with riverbeds, existing river generator does not work fine - lakes are small and located randomly, rivers are tiny and not continuous: 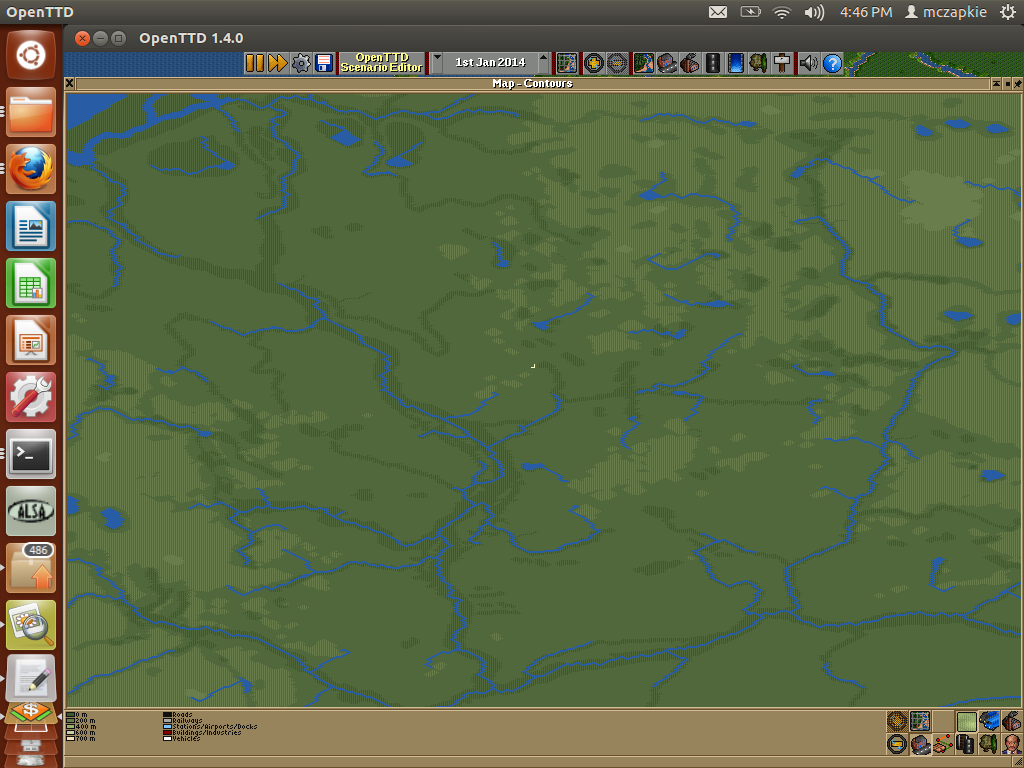 but it can be improved by scenario import tool, described below.

Scenario import tool can import towns, industries and other objects from txt files.
You can prepare these files in text editor manually (see syntax description in second post) or use aDe converter/importer:
http://ade.se/ttd/scenario-import-tool/
which can import towns from GeoNames and prepare input text for this patch, or convert water bitmap into text (other objects also can be imported if some text editor search&replace trick are used).

Currently following additional console commands are available:
import_land
(for importing all stuff from text file into scenario editor)
expand_towns
(for expanding imported towns - if some are to small)
industry_list
object_list
(both useful to check numeric Id's)

Note: it doesn't work in standard openttd version.
You need modified version of console_cmds.cpp - you can overwrite original file and recompile whole openttd.
Alternatively you can get already compiled Win32 version.
Both files, the newest version, are located here:


Detailed description of input txt files goes in next post, below. 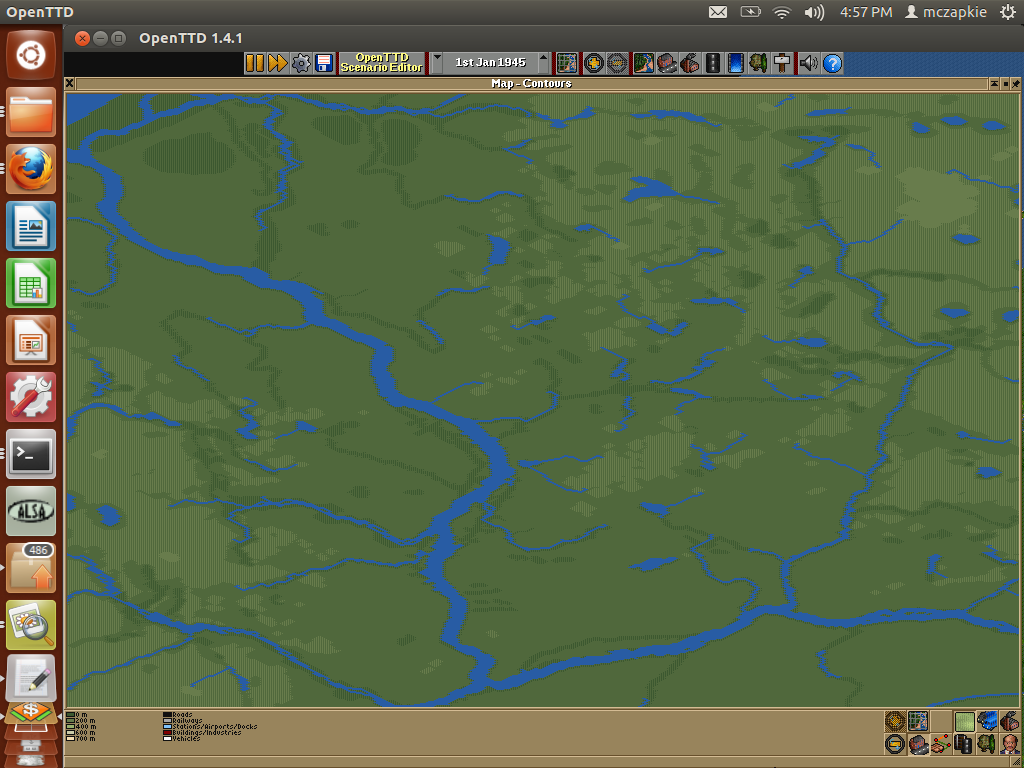 Now it is possible to import not only towns, but also objects, signs, industries, water, trees, rocks and other landmarks.
It is rather rough, unfinished and not an elegant way of data input, but it works.
Note - it is not a alternative scenario format, rather tools for (re)generating scenario with slightly randomisation.

Name of command is changed to

It works only in scenario editor context.
Import files must to be located in .openttd/scenario directory.

External files contain header and list of objects, each object is described in separate line with the following format:

Example of such file:

Object fields lined up are as follows:

<object name>
Name of town, or other object - it can be printed on the map if building failed, therefore you can easily seek for it. You can also force printing this sign for industry or other objects by using non zero <object size/importance> value.

<object size/importance> is an integer, usually 0 or 1 (or more in case of area objects - forests, water, demolition).

<latitude>,<longitude> - as in import_towns patch, but you can use map coordinates instead of real coordinates
- in this case you need to put -X instead of longitude and -Y instead of latitude, additionally max. map edges must to be negative.
For example
[code]Powerplant1,Y,0,-3,-1822,1[/code]
will place power plant (without Powerplant1 sign if succeeded) at tile with X=1822 and Y=3.


<object_layout> is a number for object layout, type etc.

Comment about V: size is like S, small, but founding probabilities are defined in second header line of import files,
as a two numbers from 0 to 100 (100 means 100% chance).
It was done to cope with huge number of cities without relevant population data.
V cities, if failed, are not verbosed as sign.
Additionally, probing area depend on city size+importance - for example, large city, if founding failed, is probed again for other 4x4 tiles,
medium town - 2x2 tiles, very small city or village - only one trial.
Another feature related with villages (V,0) is optional founding industry instead of small towns.
Third probability value (0...100%) is responsible on that - if greather than 0, some industries would be inserted instead of villages,
and type of industry is randomly choosen from list of 10 industry IDs (you can specify given ID repeatedly to increase its weight).
In above header example, because I have more than 40000 records with small towns and villages, probability of V,0 object is set to 1% - only 400 small cities would appear, and quarter of them will be founded as industries instead of towns.
It should generate aprox. less than 300 small towns, 70 farms, 20 forests and 10 sawmills - quite enough for 2048x2048 map.

Part of the map generated with help of above tools:

Example of input files and 2048x2048 heightmap as well as modified source files for landscape and console_cmd are attached below.

Sorry, I forgot to attach the most important thing: the modified source code.
Below is an attachment with modified landscape.cpp and console_cmds.cpp (version 1.4.1) and compiled binary for Windows (due to lack of some libs, only bmp bitmaps are supported).
I'm not making patch against trunk, because map created with such newer version would not work with the official one.

What did you use to convert latitude and longitude into TTD Map Co-ords. (I believe the original patch did this for you)

This is what im finding most difficult

Ok, you dont have to use TTD Co-ords as the Co-ords, you can use normal lat and lon

What did you use to convert latitude and longitude into TTD Map Co-ords.

Any chance this can adjust to accomodate the reduction in scale of longitude as latitude increases?

So here is the problem. Over the distance of my heightmap top to bottom, the west and east figures are not the same at the top and bottom of the heightmap, so whichever value I use will be wrong as the placement at the bottom or at the top will drift

Leanden wrote:So here is the problem. Over the distance of my heightmap top to bottom, the west and east figures are not the same at the top and bottom of the heightmap

Seems that you have heightmap in wrong projection system.
If you want to import objects using its real lat/long cooridinates, you can only use heightmap generated in cylindrical equirectangular projection.

Ok thats fair enough. So next question, how are we meant to get heightmaps now that the SRTM servers have been shutdown? Where do you get your elevation data from?

Well after 3 days of trial and error, it worked

Now to get the river concept down

I tried to use this to place industries and the game crashed when I tried to open the industry list. Also crashed when i clicked on an individual industry. Any ideas?

Its ok i've worked out what the issue is. Don't try and place industries before you place a town

I dont see why this is really needed, its not like all maps look so fundamentally different, its all the same perlin? noise.

Now unless you have a 64x64 map, it all loooks pretty much the same in the long run. Go play on a 4K map, you wont see the difference between one spot and the other

Ye i don't understand what he is getting at either >.>

Any advice on getting the binary to run? It tells me no language packs which is odd seeing as I have a full set of files in the "lang" folder above the exe
The TT forums trivia tournament! Come along and join in the fun
http://www.funtrivia.com/private/main.cfm?tid=90722
Top

Lordmwa wrote:Any advice on getting the binary to run? It tells me no language packs which is odd seeing as I have a full set of files in the "lang" folder above the exe

Binary is compatible with openttd 1.4.1 version, therefore should be placed in 1.4.1 files directory, otherwise lang files doesn't match.
I don't want to compile against newest trunk due to backward map compatibility.
Top

Great, that certainly is an improvement - I am now able to load up but get a syntax error (Syntax error at stations.txt:4(Abbey Wood) on trying to import. Line 4 is:

I have the header:


Basically I have a list of signs to import
The TT forums trivia tournament! Come along and join in the fun
http://www.funtrivia.com/private/main.cfm?tid=90722
Top

Proper format need 6 fields, some of them may be redundant/unused but 6 input fields are fixed:

In this case, you need to place something numerical after 'N' and at the end of line: