While playing this game, messing around with train signals, I wondered whether it was possible to create electronic circuitry with the help of signals, trains and tracks. After several days of trial and error, the attached save game is the result.
In short: I have made a ´LED´ display that counts the amount of times a train passes a certain track (see image, showing the number 3). At this moment the display will only count to 7, and then reset.

In terms of efficiency, we're doing not so well: the display takes a couple of days to update, which gives it a clock speed of approximately 0.000002 Hertz (consider that regular computers are into the gigaherz range). 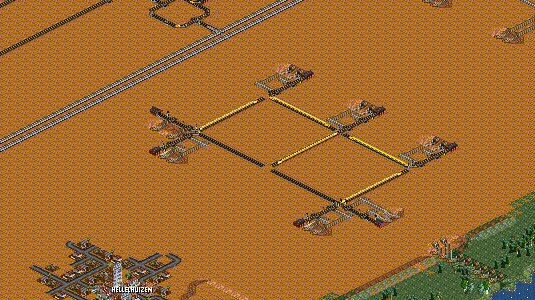 This savegame runs on the latest stable build of OpenTTD (0.6.1.0).

if triangles had a god, He would have three sides
Top

That's wicked, but how about a little closer zoom screenie?
Top

You sir.... you've got way to much time on your hands! Incredible fun to watch. It took me some time to find out where the clock was though, I hadn't noticed the passenger line was such an important part of the design. Show's quite well that conditional orders aren't needed to make a nice switch board, or should I regard your design as 'too low level' to be usable?

I guess, the "computer" could be made slightly faster by using maglev trains in the switches as well as in the "display", though I still don't know how exactly this thing works after staring at it for ten minutes...

quite impressive, to say the least...
Top

This is some what mad.

How much time did you "waste" on this savegame?
Top

Interesting.. I've started to make some comments on it with signs, but I've given up on the magic that's happening in the east oO It's too late right now for such things

here's my commented save file for those who are interested in it.

Unfortunately I've done it with trunk, not 0.6.1, so you'll need trunk/nightly too to load it...

So what this does is count how many trains pass on a certain line?
Top

Thanks for all the replies, and yes I am slightly mad

. This project took several days of slow and steady improvement.

The savegame contains a network that counts the trains that pass from east to west along the maglev line. However, it does take quite some time to update because the network is quite slow. Updating the system to maglev is possible, however, when I did that not all gates worked correctly so I stuck with railroad.

Roujin: you deciphered it correctly =]. Tonight after work and soccer I'll post a version including more details.
if triangles had a god, He would have three sides
Top

Igloo wrote:Thanks for all the replies, and yes I am slightly mad

. This project took several days of slow and steady improvement.

The savegame contains a network that counts the trains that pass from east to west along the maglev line. However, it does take quite some time to update because the network is quite slow. Updating the system to maglev is possible, however, when I did that not all gates worked correctly so I stuck with railroad.

Roujin: you deciphered it correctly =]. Tonight after work and soccer I'll post a version including more details.

I also failed to understand what your structures there using trains with ~3 wagons exactly do.
* @Belugas wonders what is worst... a mom or a wife...
<Lakie> Well, they do the same thing but the code is different.
______________
My patches
check my wiki page (sticky button) for a complete list

That's awesome. I had to laugh when I was looking at the refreshing display.

Btw, couldn't "tunnels can cross each other" cheat make your work easier?
Top

Reminds me of the old NAND-Signals Patch

After playing this game for a while it became clear that the signals are very powerful. Which led me to wonder whether it is possible to build all logical gates in openTTD using only trains and signals. From there on it went downhill. The attached save game is the same save game I posted previously, but now with lots of comments.

The OR gate is trivial: 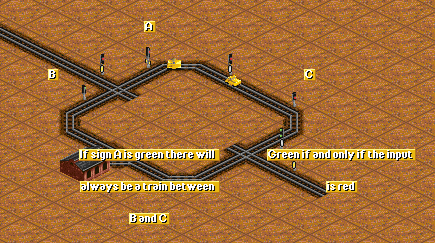 The NOT gate was the hardest. By using a combination of presignals and standard signals it was possible to keep one piece of track occupied continuously if the input is green.
The attachment NOT.PNG is no longer available
The memory is simple in itself. However because the system does not use a clock-pulse it became more complex. To work around this problem the memory stores it's state internally before the output is updated. Hence two trains for each bit.

The other parts of the system are large combinations of ORs to convert binary numbers to decimal and to update the LED display on basis of the decimal value.
if triangles had a god, He would have three sides
Top

Apparently only three files can be included in a post

if triangles had a god, He would have three sides
Top

I've tried to do the logic gates too one day, OR is not so hard as it is the default of presignals. AND becauses a bit harder but isn't that hard to get as you can simply add an extra signal IIRC, it has been a while though.
I think I never got the NOT gate to work although I fiddled quite a bit with it.
I also remember having completed another logic gate but I don't know which one.

Kudos on the LED counter though, I haven't looked at it but it sure seems like it took you A LOT of time and thinking to make it work.
Don't panic - My YouTube channel - Follow me on twitter (@XeryusTC) - Play Tribes: Ascend - Tired of Dropbox? Try SpiderOak (use this link and we both get 1GB extra space)

OMG, that is crazy!

Nice to see, someone reached to make a NOT and AND (NAND) without patching: http://www.tt-forums.net/viewtopic.php?f=33&t=26364

Thank you for posting the commented version. Now I also understand the eastern part. Who would have thought that these wacky constructions with the waypoints are nothing else than AND-gates?

Great job on managing to build them!

edit: now, how long will you take to build a turing machine out of rails, and emulate OpenTTD on it?

This is really nice

It reminds me of a similar program I once programmed in QBasic, which basically was a binary adder (the thing that adds two numbers, not the snake) using a train and a lot of switches. If one figures how to make the switches work reliably in OpenTTD, then one could make a binary adder in OpenTTD as well, although it will be quite large, I guess.
Top
Post Reply
63 posts