Oh dear, he's at it again. Didn't you pay attention in school when they told you never to play around with voxels? 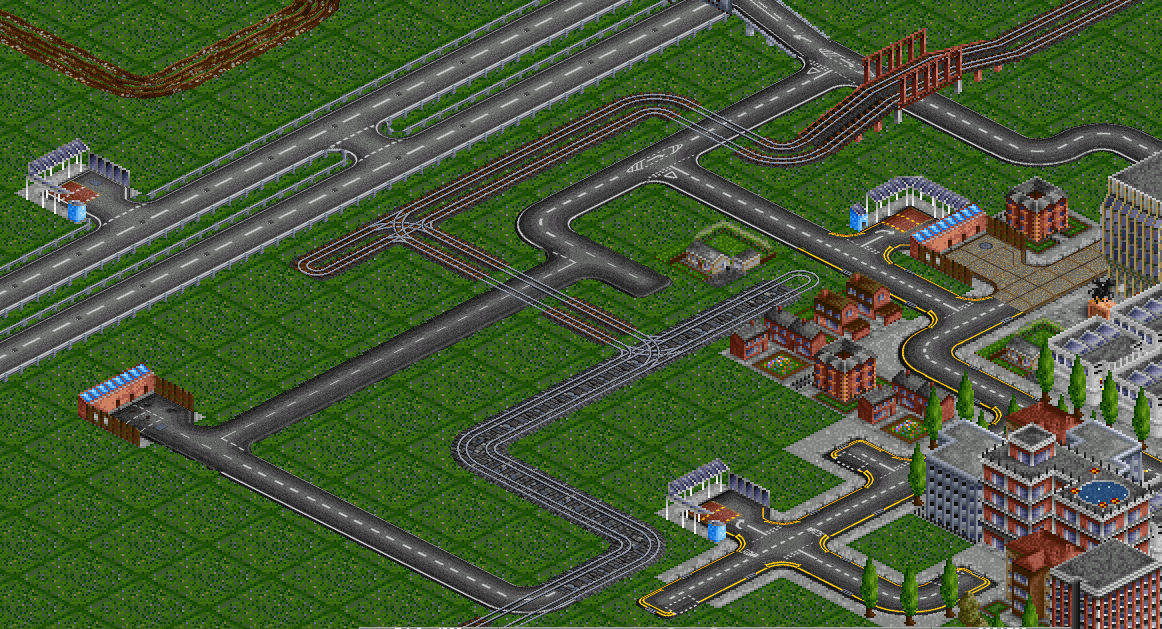 It's a UK-inspired road set, in 8bpp with 2x sprites for everything to maximise the opportunity for confusion with people using "32bpp" to mean extra zoom. Like my other sets, it's intended to be close in style to the original Simon Foster graphics while taking advantage of the latest OpenTTD features. So we have roadtypes of multiple speeds and generations, and high resolution tram rails to match, but if you zoom out, set your screen resolution to 640x480 and dig out those old Green Day cassettes it could feasibly be 1995 again.

The aim is something I loosely collect under "project coexist" along with the stations and tracks - making 2x vehicles more feasible by providing infrastructure in the same resolution, with less jarring transitions to 1x graphics. (I feel it's easier to blend in a static and relatively uniform road edge or station platform than a moving vehicle with lots of detail and contrast)

Currently done: everything you see here.

Still to do: town centre graphics for the unpaved roads, outskirts and suburb version of the town road (much the same, but with less aggressive parking restrictions), catenary for trams and trolleybuses to attach their electric noodles to, and a similar variety of depot sprites to Timberwolf's Tracks. Plus GUI sprites and a higher-res sprite for the one way overlay. Trying to keep this relatively small and somewhat of a palate cleanser after two monstrous vehicle set releases this year. Road sets are good for this, they don't have variables that let you inspect where one road is relative to another and do horrific things. Not that I'd ever do that.
Last edited by Timberwolf on 16 Dec 2020 11:38, edited 1 time in total.
Top

(because nobody likes crickets)

This looks really nice so far,c an't wait until we can download and play around with it!
Hi~
Top

Been working way too late trying out different ways of adding detail to tram catenary... and eventually deciding the best approach is simple and unobtrusive. Junctions, curves and end loops to be done (in my workflow, relatively easy once the base structures are established): 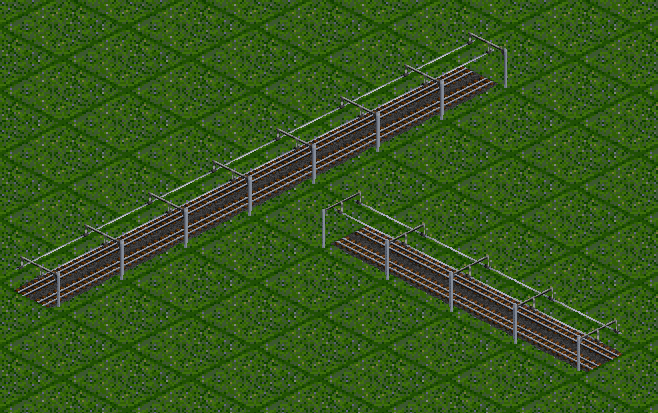 I think there's enough resolution to do double trolley wires, but we'll see when I get there...
Top

Nurse! Nurse! He's at it again!

Looking good Timberwolf, and glad to hear you're doing trolley wires too, the addition of the NRTs has opened up a world of possibilities.
Top

That is beautiful, I want that.
Špajdy | Slovakia | languages: slovak, eneglish | I code in NML |

Trolley wires are indeed a feature, they will be available on the concrete and modern urban roads. I've designed the catenary to strike a compromise between being realistic and visually distinctive, so you can see at a glace whether something is electrified for trams, roads, or both: 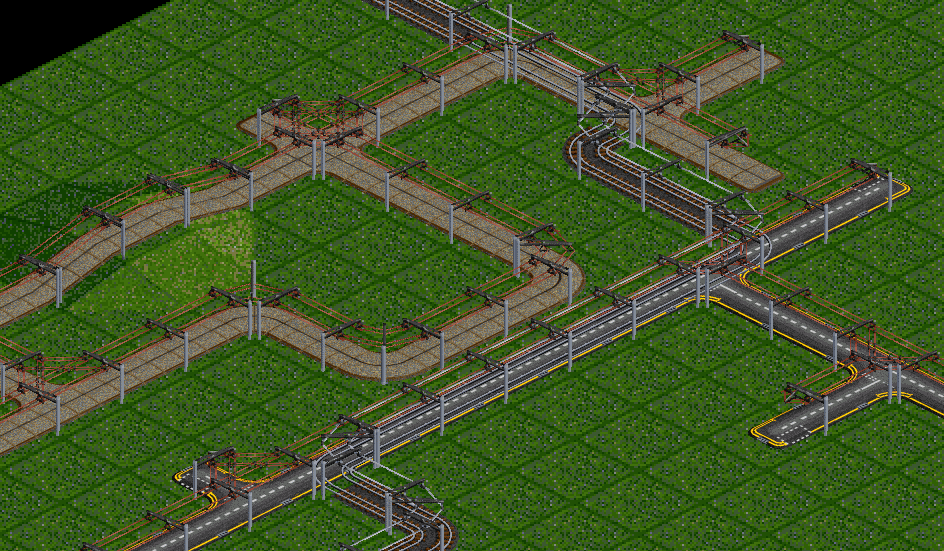 This also solves the problem of the "3 pixel wide blob" at normal zoom, instead the combination of trolley and tram wires is pleasing even at low resolution. 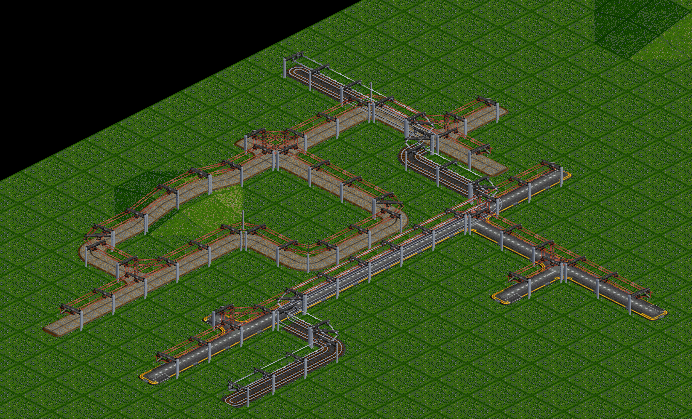 (Trolley wires by themselves look like knitting at this resolution, but that's hard to avoid when you only have a few pixels and a lot of wiring to fit in them)

Still to do: depots, GUI sprites, one-way overlays, town zone dependent graphics for urban road/track. I also should make the junctions correctly reflect the drive side of the vehicles, which should be relatively quick once everything else is stable.
Top

Something you may remember me talking about is my personal "calibration exercise" for any new type of sprite, where I first try to replicate one of the original Simon Foster objects to dial in my GoRender settings and the right colours and techniques to use on the voxel object.

Here's the road depot version of that exercise:

Timberwolf Base Set when?

I fear the idea of doing a base set, I'd have to actually align things properly...

Sprites for era-dependent depots, which will be chosen based on build date: 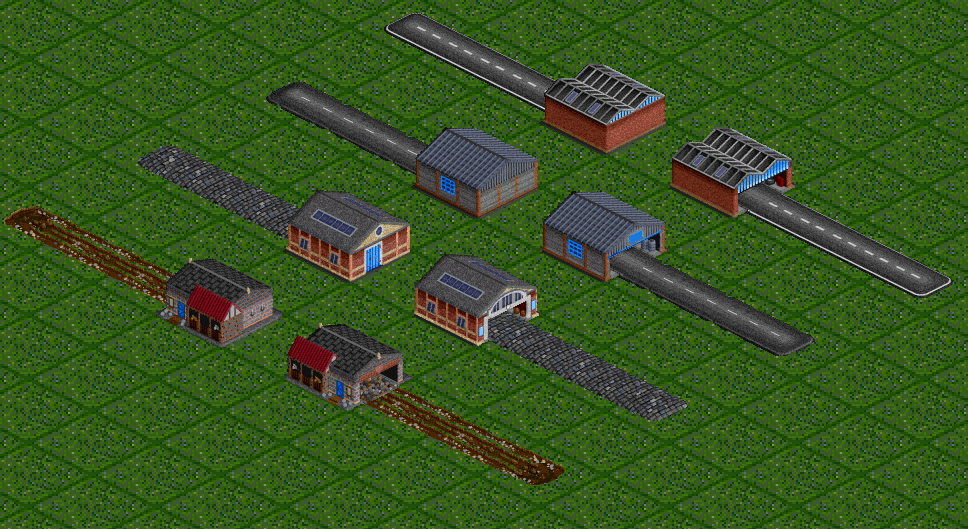 Also in tonight's work, town roads now have different variations for "centre" and "suburbs", with stricter parking regulations in the former. Since I need a switch chain anyway, there's a good opportunity to create some extra variation in the dense city centre networks, with a random variation chosen approximately 1 in every 4 tiles: 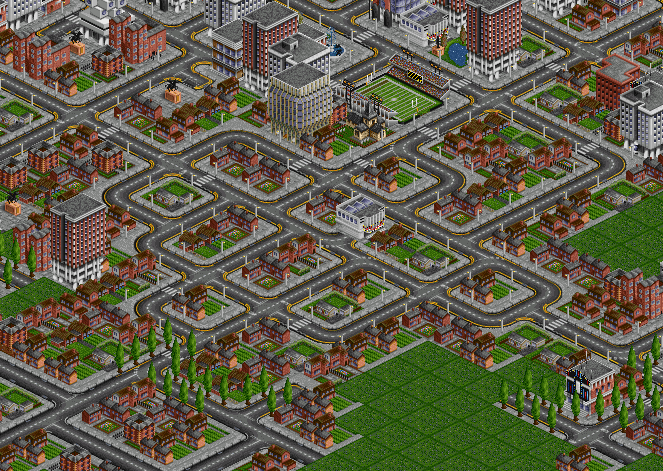 I do love that cobblestone texture you've got there.
Top

It's surprisingly effective given how simple the model is: 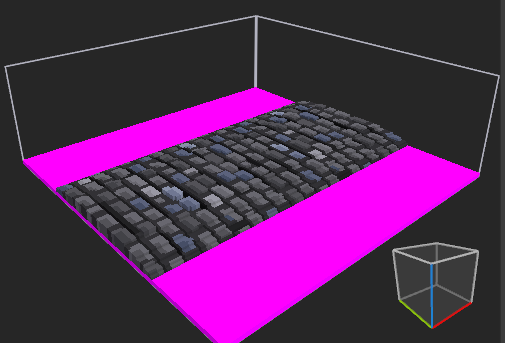 I create them by having a block pattern with the setts, which I then paint over the road shape in MagicaVoxel using the Pattern tool. As a final step I erase some of the gaps between blocks and raising a few one or two voxels to give it a little bit of unevenness, and that seems to interact quite nicely with GoRender's lighting and shading model.

One minor point of order: that's actually a sett-paved road. An important distinction because there's a separate sprite for cobblestone: 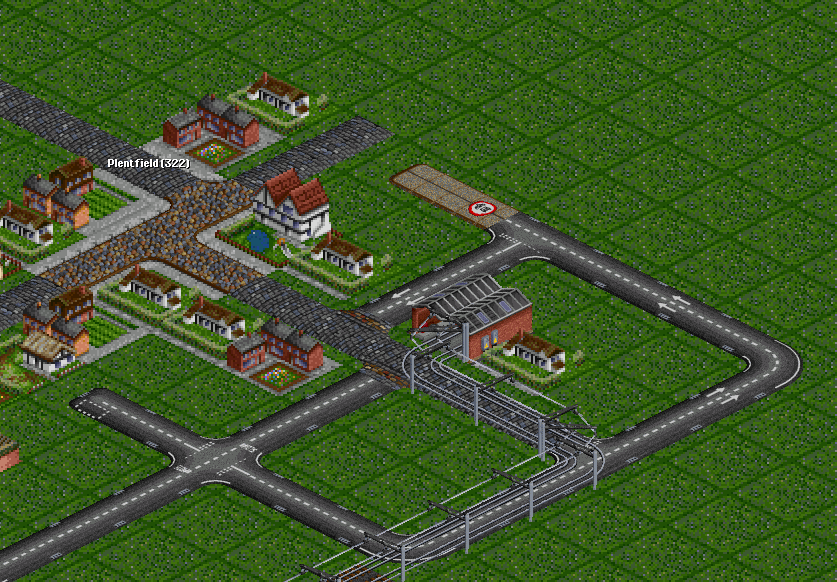 Towns build cobblestone roads in their centres as part of the "Unpaved Track" road type, because it looks a bit odd having rutted mud tracks next to pavement. (Except for drive-through bus stops: there's a slight bug in NRT where drive-through road stops don't get the right town zone and still display as tracks, I may have to relearn C++ and see if it's fixable once the roads are released.)

You may also notice I now have subtle sprite variations for electric depots and custom overlays for one-way roads. GUI sprites are also done, I think the only thing left from my list is supporting "Road vehicles / Drive on right", tidying up and adding a readme, and we should have something releasable!
Top

Timberwolf don't you think default depot sizes are a bit too huge/high, especially compared to buildings around?
That's the reason I use smaller depot variant for road vehicles, in my opinion it fits much better. What do you think? 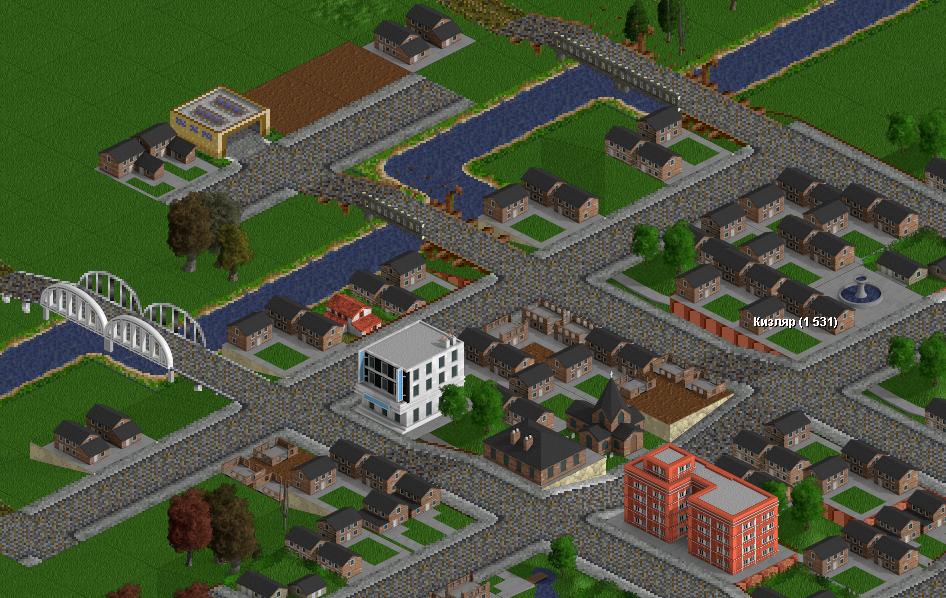 ... and version 1.0.0 is now available on BaNaNaS. Enjoy, and hopefully there aren't too many first version bugs I failed to spot! 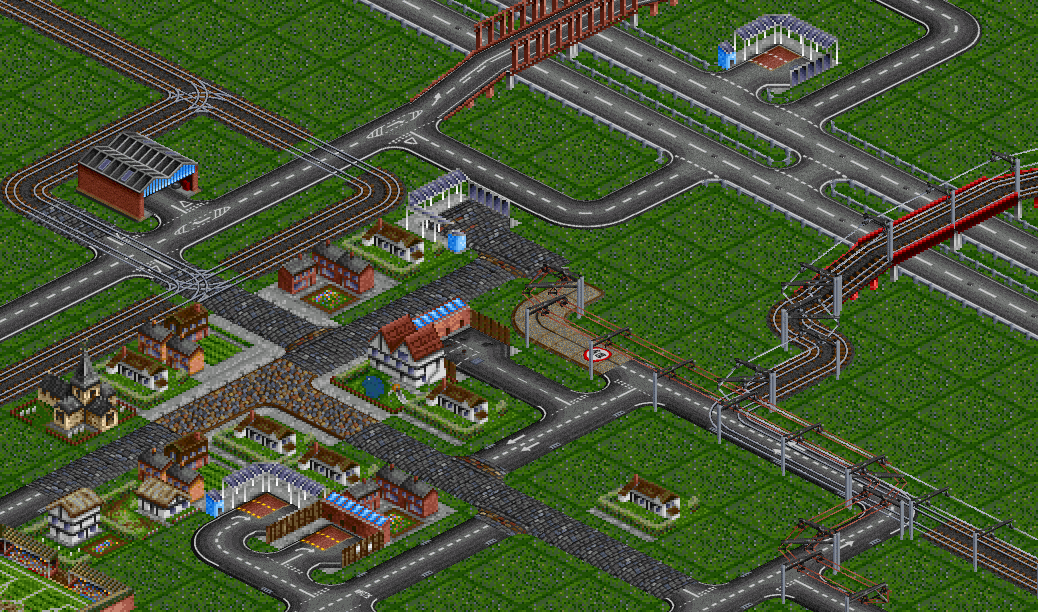 Maybe it's just me, but the curve looks too pronounced. It looks like there's a giant hump in the road.
Do you like drones, quadcopters & flying toys? Check out Drone Strike Force!