At the moment the set has only 4 vehicles:

f you want you can suggest a car to add and I will include it in a list to take into account, either for this set or a later one, for now I have to keep working on the graphics and then it will be time to start editing the specifications for weight, speed and more.

I handle the graphics part without problems but I had to learn NFO Coding, so I want to thank Maquinista, Zephyris, Wallyweb, Emperor Jake and the Transport Tycoon Wiki since their contributions, explanations and help have helped me to learn and make this possible.


19/10/2020 Update: I have decided to design some more graphics, although the original idea was simply to make a set of cars in 32 bpp, I think that in an 8bpp environment they would look weird if they are alone, so it seems a better idea to make a few more graphics at 32bpp.

At the moment I modeled a car dealership, some parking lots and a few days ago a few residential houses that I am currently working on.
Last edited by temporal8 on 19 Oct 2020 21:04, edited 4 times in total.
Top 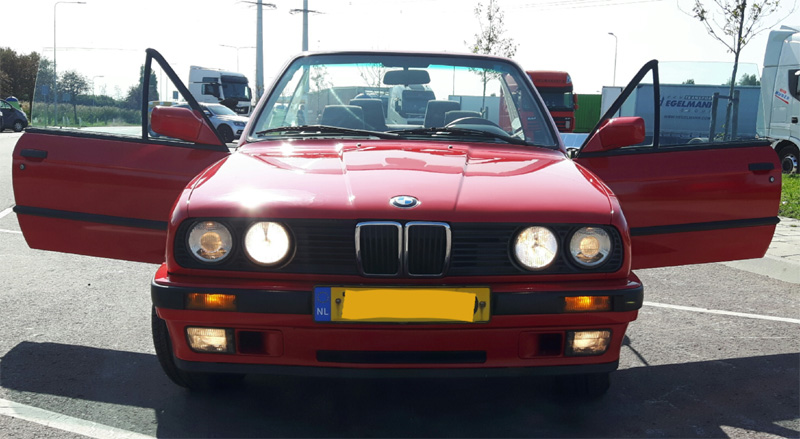 I would like to suggest my precious:
BMW E30 Convertible

, I also had a convertible, I sold it 10 years ago, traveling on the route / highway feeling the wind and the sun on the face is priceless.
Top

The cars look as if they are hovering over the road. Also, I think they are very, very oversized compared to the road and the guardrail.
Top

odisseus wrote: ↑04 Oct 2020 16:19 The cars look as if they are hovering over the road. Also, I think they are very, very oversized compared to the road and the guardrail.

Thanks for the feedback.

Floating is dued to the shade, it's already fixed in all vehicles except the civic.

The relationship with the street is a street problem not the vehicles, I leave you an image where you can see the size relationship of the cars with an original bus from the game and others,
I do not like the original short vehicles of the game, I prefer more realistic proportions. 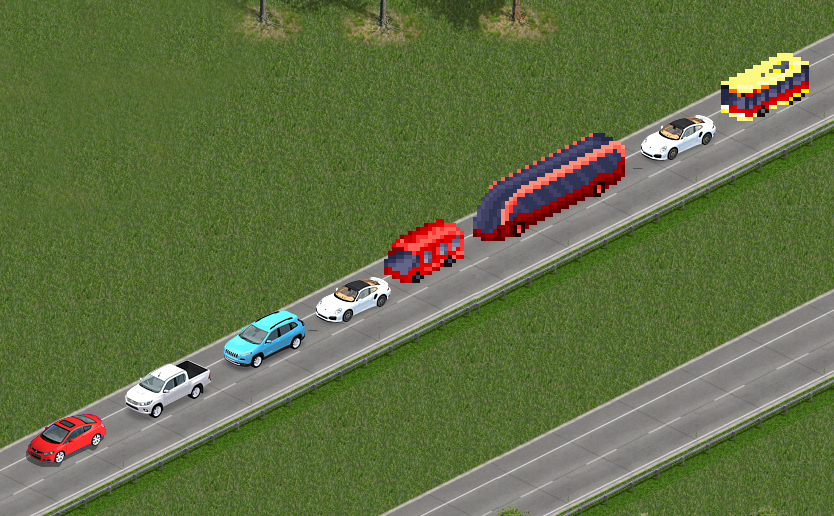 Your screenshot just proves my point — your cars are way too large. 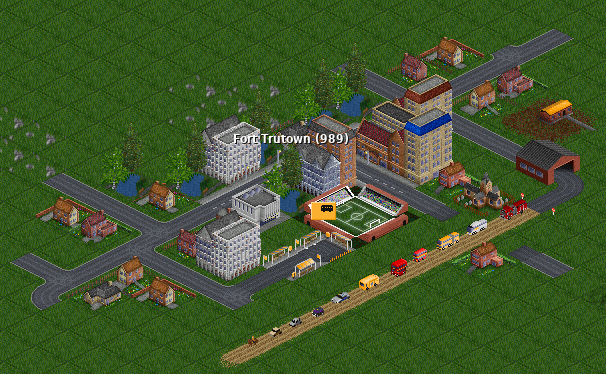 revelation,
plus a garbage truck, fire truck and some ambulance
official

That of course, everything that is related to scale in openttd is upside down, there is no doubt.
The first cars were scaled taking into account a police car (eye candy cars grf)

I think that now the Civic has an acceptable size and maybe it is a new standard for the vehicles that come, or now you see it very small? 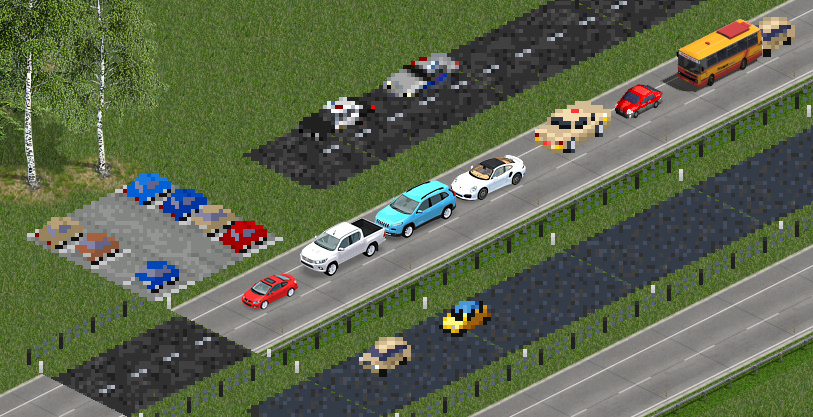 On the other hand, the pixelated brown car is absolutely huge. I wonder what GRF it comes from.
Top

The scale of the reduced Civic seems much better. I don't think it's worth trying to keep strict proportions with all other vehicles. Each set has a different scale, but I think that the Czech additions will be the best point of reference at present - their scale is the best compromise between showing details and maintaining proportions with other elements of the environment. As for the centering, it is worth checking how the vehicles look on different roads - Civic looks good on the Czech, but on the Australian it may be too much in the middle.

By the way, I once had a similar idea to create a set of different eyecand vehicles and objects closed in one set, called PIMP.grf. This is a set that would be applicable especially in online games with extended gameplay - it would be a motivation to earn even more money, or a way to lose money that has already been earned and there is nothing to do with it.

Vehicles (very luxurious), planes, yachts, and also properties - all disgustingly expensive and terribly to maintain (e.g. civilian version of the SR-71 covered with 24k gold) - would be a manifestation of the wealth and position of the owner. A completely unethical addition, but I think that's why it could be really cool.

Well, the only thing I was able to do with a whole set of dozens of items was ... one shot of the Bugatti Veyron.

A useful option for eyecand vehicles can be to disable / enable costs and capacity. Sometimes even small payloads can be useful, but other times when cars are running freely on the map they can create unwanted connections whats can be problematic.
An interesting element of such an add-on can also be the sounds of vehicles. Take a look at the Ford T from Generic Cars or the Lamborghini Gallardo from SuperCars, for example.
I am sorry for may English. I know is bed.
Top

odisseus wrote: ↑04 Oct 2020 19:48
That said, the scales of different vehicle sets are grossly inconsistent in general. For example, here's a screenshot of various buses and eyecandy cars alongside town...

Let's be honest though - the scale of default OpenTTD buildings is whack, especially when it comes to taller buildings. Anything larger than a small house should really be on a 1x2 or 2x2 tile. I don't think it's fair to try to keep 32bpp./2x zoom vehicles to try to keep scale with these old standards.

Personally, I like these cars. Maybe having them scaled slightly smaller is better, but truthfully I like the bigger vehicles. I would even argue that next it's time to resize the buildings in proportion to these cars.

I suggest the Corvair PF Concept. It looks much nicer than the production model Corvairs!
I have Asperger's, please be easy on me about stuff. My apologies if I've been a problem for you in the past.
Top

I agree that making the vehicles scale fit the buildings is an exercise in futility. But it is important that a vehicle doesn't look out of place next to its immediate surroundings, i. e. the road and other vehicles. The bigger cars were visibly oversized even with relation to the lane width.

By the way, more detail isn't always a good thing. In this particular example, the bigger cars clearly have neither driver nor passengers inside. The sight of empty cars speeding along a highway would be a bit... unusual, if not unsettling. In the smaller car, the lack of occupants is not nearly as eye-catching, even though the model itself hasn't changed.

In fact, I think that the increased level of detail is the fatal flaw of the whole 32bpp project. Whereas the old graphics sort of imply the presence of a multitude of smaller objects (such as building and pavement irregularities, manholes, and, most importantly, pedestrians), the 32bpp graphics make it clearly discernible that these objects just don't exist. What's the point of modelling, say, a bus in great detail, when it's going to be loading invisible passengers from an empty waiting shed?
Top

Thanks guys for the feedback.

In fact earlier today, long before I read this, I started to include the driver driving.

Regarding the scale, I think that the dream of many of us is to bring the game more to current times, in fact at SOTM every month we try to squeeze OTTD a little more. (I agree with kamnet)

However, seeing the above image... I honestly like that appearance of a scale model, I thought about going to a larger scale for a moment, but it does not make sense, that would imply more detail and more work and to be honest, we all know that the next step to OTTD is Transport Fever, but I didn't want to install it because I can waste a lot of time creating things.

I think this scale is convenient to create content without spending a lot of time on it, it makes sense if one does not have that much time available.
Top

The issue with drivers though is that you have to take extra care that they look ok in the vehicle.
In this case, I think the hands are a bit weird, it looks like they are folded over each other over the steering wheel, that looks a bit unnatural. 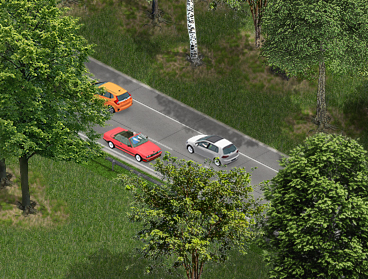 Your set looks greattt can't wait to deploy it in the game ❤ are you planning for other sets in the future like planes set for example? Thank you

bassem.90 wrote: ↑06 Oct 2020 18:13 Your set looks greattt can't wait to deploy it in the game ❤ are you planning for other sets in the future like planes set for example? Thank you

Thanks, At the moment only road vehicles and I am experimenting with Newobjects.

I doubt about airplanes, it is not what I like the most but who knows the future.