These are all files associated with a Underground Railway Network.

There are road bridges, objects and railway stations with items on top to make it look like they are underground.

All these files are still under construction and more will be added or changes might need to be made.

The Road bridges that look like normal roads. (These Road Bridges can only be used with JGRs OpenTTD version).

Object sets that have Overlapping tiles to help hide railway lines and signals.

There can only be 3. If I ad more they will conflict with other bridges from other sets and default ones.

Two are the default roads .. 1 without the paving each side so they can be used with the Dutch Road Furniture.

1 with paving at moment I called it the UK roads.

And a American road set.

This is a mixture of road bridges, objects and stations.

The Car Parks are Cargo Aware.

The Objects are all overlapping tiles between 2 to 4 tiles. They will conflict a bit.

Now you just need a tunnel sprite that disguises the tunnel!

They can be drawn as subway ventilation shafts!
Do you like drones, quadcopters & flying toys? Check out Drone Strike Force!

kamnet wrote:Now you just need a tunnel sprite that disguises the tunnel!

The electric rail set I designed for the underground does not have the overheads .. this to stop them sticking through the top of the tiles above.

I'd think a railtype with a tunnel flush to the ground above would be the the best way of going about things. Also, stations is misspelled in your signature.
Jetrain
YATTC
Top

Good idea .. what we suggest to put on the top of the tunnel? Fake road, Parkland, kids play ground, a building? Any suggestions?

Good idea .. what we suggest to put on the top of the tunnel? Fake road, Parkland, kids play ground, a building? Any suggestions?

That might be a good idea as help players remember where they put the underground tunnels and tracks.

https://londonist.com/2015/01/londons-secret-shafts , I like the way they blend in ish with the surrounding , Gibson Square,nice and simple classic architecture .The ‘houses’ in Leinster Gardens is a great piece of architecture , I wonder how many people know what is behind the door ... https://150greatthingsabouttheundergrou ... r-gardens/ .
Top

Thanks Piratescooby shall see what can done with some of those images.

Biggest problem is me getting chance to work on them and any project for at while, but hope to eventually do something about it.

You take it easy , what you have done is amazing . What I've seen of them vent shafts they are disguised as monuments , ornate objects small buildings most of which is I presume can be adapted from the objects in the many Grf's that are available . There is no rush to fire these out , Health , Family and Life comes first , you take care .
Top

Thanks for your thoughts.

I don't mind people giving me their 2 bits worth as often gets me motivated to do things and helps with ideas.

The idea of Kamnet's hope to add it to my rail set for the underground rail system I made. Electric tracks with no catenary poles and wires so they don't stick through the surface. The Ventilation shafts should look good above the tunnel portals and maybe as monuments ion Parks.

Hope in a few weeks time to get back into it again.

First of all lately I am playing with Auz Add On and I got to say everything in this mod is astonishing. From details to usage areas this is literally the NAM (Network Addon Mod) of Simcity 4.

On subway stations though I noticed something and I hope you would be able to give some support to me. I am a subway fan and on most online games I try to build a public transport network with a subway system. Until now I was using Dutch Add On as subway stations because they are able to cover an entire straight subway station (including tunnels). However on 90 degree turns and on large subway station layouts; Dutch Add on doesn't offer anything to cover all rails. Here is a discussion I made about it: viewtopic.php?f=26&t=77394&p=1232324#p1232324

Now on the other hand, I can cover many more areas with Auz Add on subway station overlays with 2x1 3x1 and 4x1 overlays. However there is nothing useful that covers tunnel entrances on a straight station. On pictures below you see an example of Subway station layout: 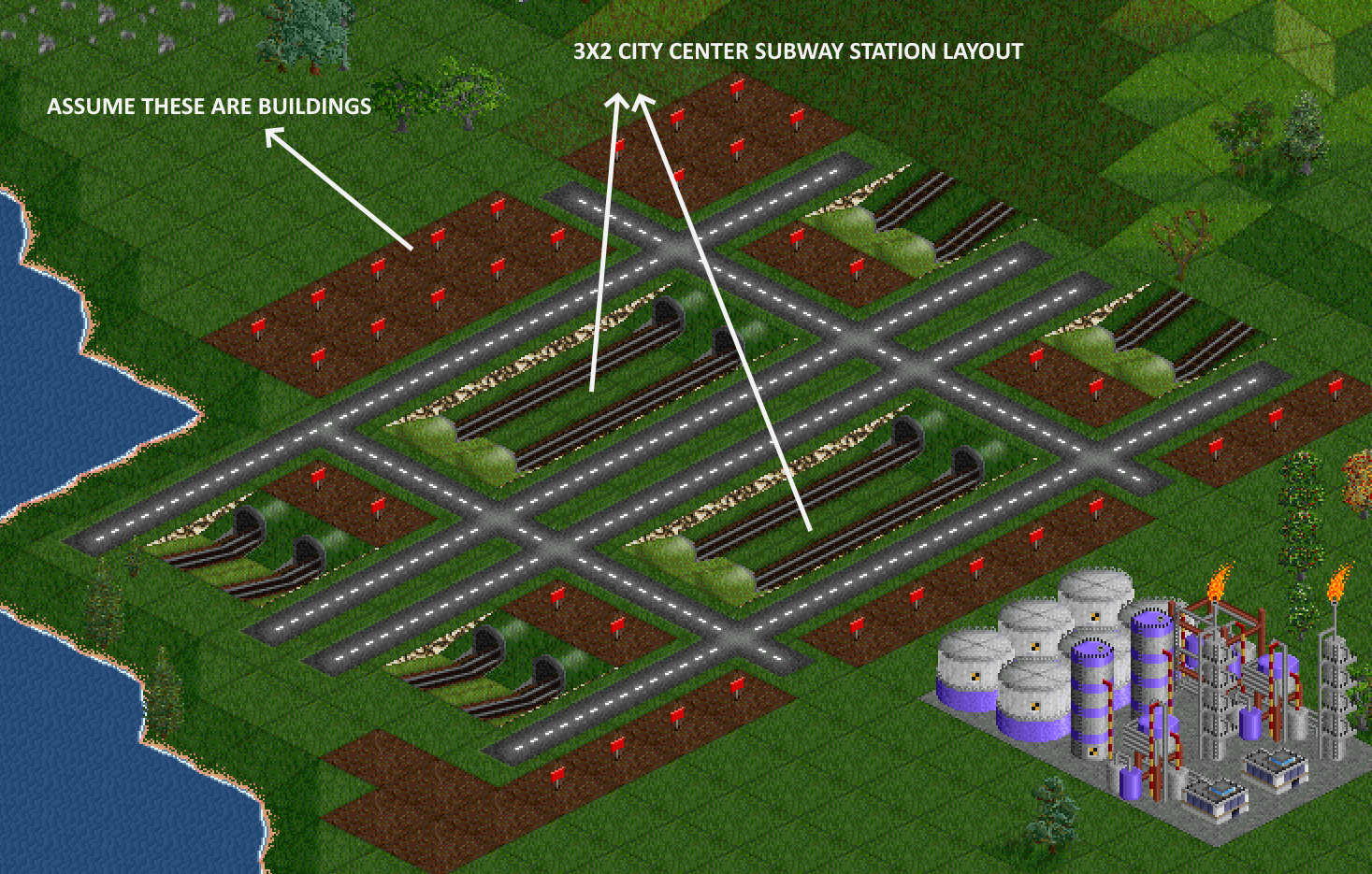 As it can be seen below; the tunnel entrances marked with circle cannot be covered by anything on Auz Add On. You may suggest me to use 2x1 station overlay perpendicular to cover tunnel entrance but as you can see city centers are crowded places and there are roads already around tunnel entrances. 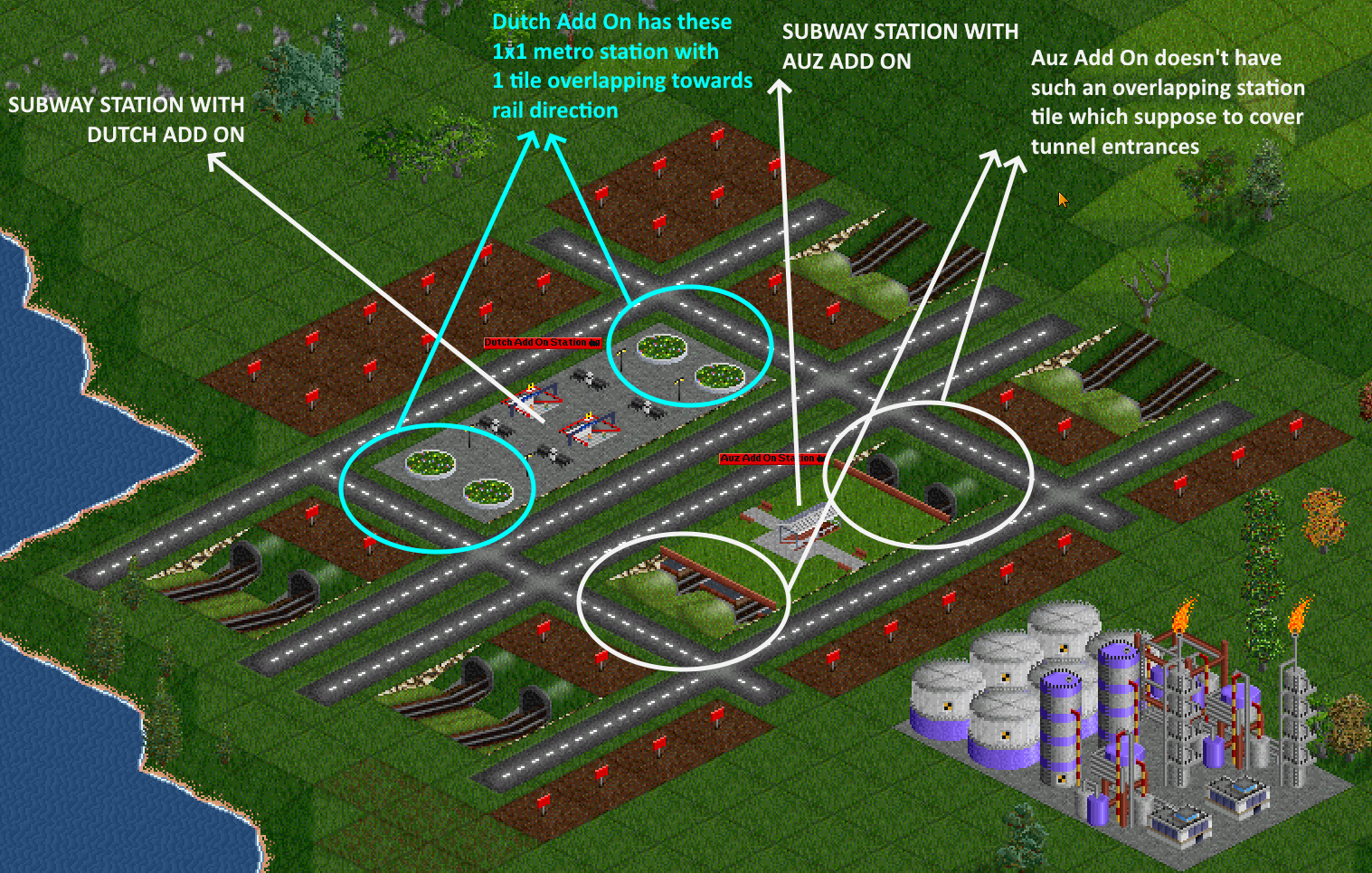 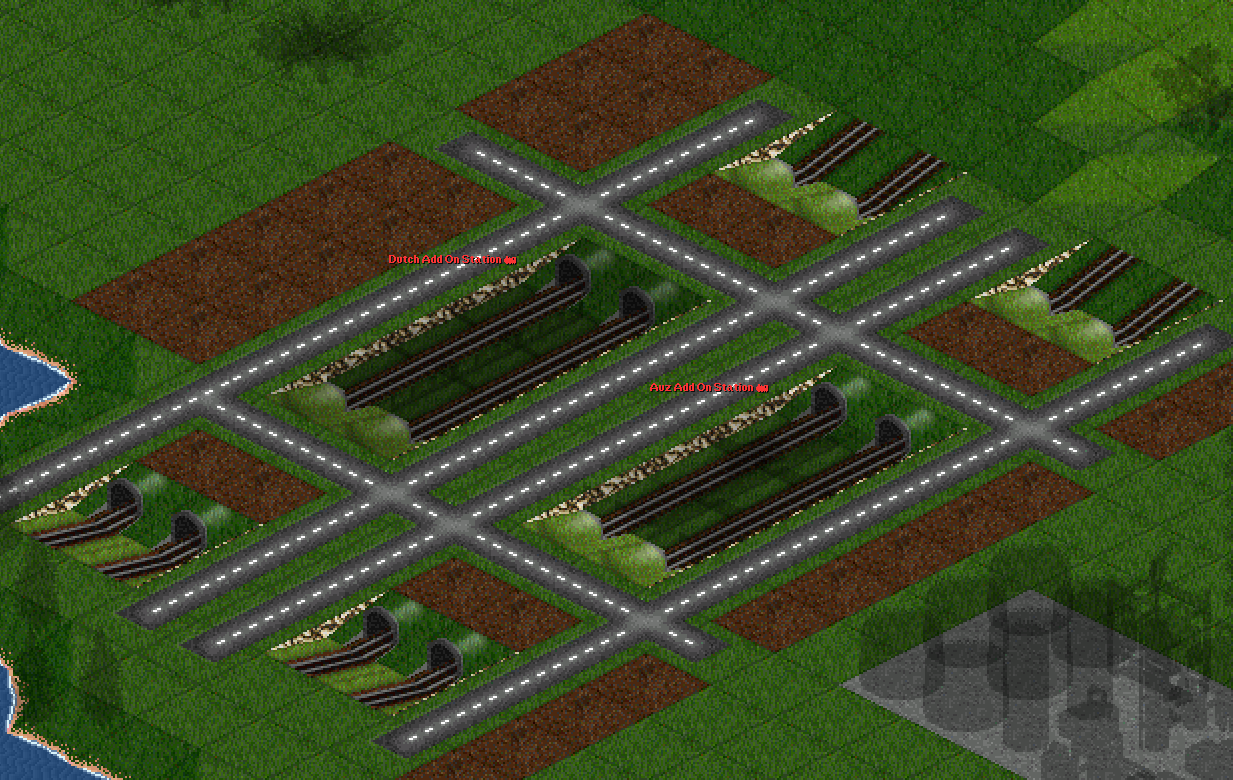 I hope you can help me about to find a solution on this problem or maybe a 1x2 station with overlay towards rail direction would be beneficial.

Hi EG
Garry has subway covering pieces in his GRF range. But they are in eye candy menu rather than in the station menu. Try looking in there. I am not sure of the exact GRF but I am sure someone will follow up with which one it is.
Happy playing

Yeah I read that bit carefully after and saw what you meant. Sorry for jumping in without reading carefully.
I am sure our Garry can solve this. He is very talented.
‘Note to self must read more carefully in future’

making a overlap for those tunnels is not going to be easy especially with the roads in the way.

About the only way I know would be a fake road to replace the actual road near tunnel and have a overlap attached to the road. But problem there is what road design do I use as so many types now.

You can make station platforms that overlap either direction, but the overlaps to the south they will glitch a lot.

Any one with other ideas let us know.

GarryG wrote: ↑17 Nov 2020 09:20
About the only way I know would be a fake road to replace the actual road near tunnel and have a overlap attached to the road. But problem there is what road design do I use as so many types now.


But then road will be eye candy which makes it unusable. That would cause more trouble than benefit.


GarryG wrote: ↑17 Nov 2020 09:20
You can make station platforms that overlap either direction, but the overlaps to the south they will glitch a lot.


Current 2x1, 3x1 and 4x1 subway overlaps are also slightly glitchy since when train passes under them they become visible through. However I personally think that anything that looks reasonable is enough for it. As for examples; only Dutch Add on has subway station overlays working without that glitch above. (in fact as I know only Auz and Dutch Add Ons have subway stations. I see a potential NewGRF opportunity for 3rd Add On

One of the problems is height. The height from bottom to top of a slope is 8 pixels. .. height of a train is usually also 8 pixels from ground to top of roof. The over head electric wires usually 12 pixels high and the top of poles when we have the 2 wires can be up to 24 pixels high. So makes it difficult to have subway electric trains as they stick through the top and if a steam train the smoke come through the top.

The multistory car parks I working on in objects .. I intend to make some of these to go over top of stations. Because of the height of 24 pixels they just might be okay as a overlap.

Shall see when I have them ready to start coding in.