As a map maker, I noticed lack of comprehensive Central and East European train set.
There are some national sets, but they doesn't mix well (different prices ruin game balance).
On the other hand, famous Train of the World in 2cc is too heavy overall, but too sparse if certain region is chosen.
Therefore I decided to make train set depicting railways of Visegrad Group, therefore I named it V4.
My plan was to fork 2cct, delete unwanted exotic stuff, add some new locomotives and tweak some parameters.
Half of my plan is already done: I deleted lot of stuff from 2cct fork

During documentation survey I decided to add more countries: not only Chechia, Slovakia, Poland and Hungary, but also Austria, former Yugoslavia, Romania, West part of Soviet Union and East part of Germany,
because lot of rolling stock appear to be common for these countries (and one new map would utilise such set).

Teaser of this set is available on http://dev.openttdcoop.org/projects/v4-train-set/ files section,
as well as sources on GPL2 licence.
User can choose countries, similar as it was for regions in case of 2cct (however some locomotives are inherited, for example if only Hungary is chosen, RZD M62 will be still available).
Currently set is not playable if a single country is chosen, due to lack of locomotives.
Tracking table of implemented and planned locomotives is here:
https://docs.google.com/spreadsheets/d/ ... sp=sharing
(black: existing, red: planned)
Not planned: add all locomotives ever existed in these countries. There was thousands of types. I want to keep this set playable, not realistic.

Many thanks and all credits go to creators of Trains in 2cc and Trains 2cc in NML sets, which are real parents of my child

Nice idea!
If you need any info about Soviet rolling stock just look at xUSSR Set tracking table (.xls file). If you find it hard to use, just tell me time gap and role you need.

Also, years ago I've made similar table for East German DR. Added it below.

DRset-eng-np.xls
Tracking table. Most of it translated, but not all. All photographies removed.
(72 KiB) Downloaded 300 times

Sorry for my bad English.
Top

Thank you for reminding me this file, usually it is hard to research crucial data such traction force or power and this spreadsheet fills such knowledge gaps (is cyrillic abbr. l.s. == hp?). Also DR table is very useful, especially number of produced pieces to choose which were most popular ones.
BTW, I seek some more information about American locomotives https://ru.wikipedia.org/wiki/%D0%9F%D0 ... %B7_%D0%A5 and https://ru.wikipedia.org/wiki/%D0%9F%D0 ... %B7_%D0%92 which were used in Russia - in which regions were they used? Far East only?

Exactly. Please note that these numbers are power "on rails" (conuts loss of power in transmisson). Not engine power used in most openttd sets. That means it should be increased in most cases.

H (паровоз Х) were ordered by and used at Vladikavkaz Railway (later merged with Notrhern Caucasus Railway), Moscow-Vindavo-Rybinsk Railroad, Eastern-Chinise Railroad and South-Eastern Railway (despite it's name it is to the north form Notrhern Caucasus Railway and borders Ukraine). Only surviving locomotive of this type were found in swamp after it crashed there in 1910's is on exhibition at "Museum of the Imperial Palace of the Manchu State", China.
V (паровоз В) was ordered by South-Eastern Railway and later by warious Moscow railways. There isn't much info about that type of locomotive.
Both locomotives had Vauclain compound and used oid as fuel. Because of that they were either retired or completly rebuilt at 1920's.

So both of them were used at south-western part of Russian Empire/Soviet Union with some of H type used at Far East.
And I made H type yesterday for xUSSRset. Not sure if it will fit 2CC style locos, but you can use it if you want (under GPL2).

Simozzz wrote: If you are looking for American locomotives, try 2-10-0 E series

Nice idea. For the ÖBB 2016, you could probably aim for the MTR 8000 (China) sprites from the 2cc train set. That is literally the same locomotive.
My screenshots
Top

Here it called "Крытый вагон" - literally "covered wagon". But when it comes to translating no one calls it that way. Boxcar used instead.

I think there is lack of FD20 and maybe Su in my set to fill gap between 1st and 2nd WW.

Maybe this one?
Sorry for my bad English.
Top

Yep, mostly red, shorter tanker wagons are more varied, grey, [url=http://bejczi_gabor.fortunecity.ws/790-6000.jpg]white[/url], simply unpainted stainless steel, or soemtimes red with a black stripe, longer ones are primarily white with a horizontal stripe.
Other wagons are almost always red, sometimes bright, orange-ish red, except conatiner wagons, those are blue.
I think there aren't more standard colours. Of course, exceptions always will be

McZapkie wrote:Is it possible to redefine colour mapping with use of livery_override?
I wan to define different liveries of locomotives and adjust cars livery mapping accordingly.

in the livery override block and have the switch manage the livery based on cargo_subtype of the PARENT
No pics no clicks. Seriously.

Depends on type of cargo. You may look at colours used in xUSSRset (with RAL-codes).

Shortly:
Boxcars usually brown/brownish-red, rarely green. Same for gondolas and covered hoppers. Refrigirators are white/light-gray. Livestock car - green. Tankers usually painted in pale brown for various cargoes, brown for crude oil, yellow for refined products, light-grey for bulk cargo, with double red stripes for food, with wide single stripe for chemicals (colours depends on chemical).
In modern times there is no regulation on colours, so they any may be used. That wasn't short, was it?

McZapkie wrote: 3. when was DR conversion from green to green/yellow passenger coaches?

McZapkie wrote: 3. when was DR conversion from green to green/yellow passenger coaches?

No, the colour scheme was also in use for national traffic (i.e. orange was the colour for "Städteexpress" (inter city traffic)), but in first place only for new waggons. Old waggons got no new colour for a long time (until next revision?).

No, the colour scheme was also in use for national traffic (i.e. orange was the colour for "Städteexpress" (inter city traffic)), but in first place only for new waggons. Old waggons got no new colour for a long time (until next revision?).

The cream/green livery was orginally meant for international traffic. Take e.g. the "Abteilwagen Typ B", first built in 1962. This one had been based on the shorter UIC-X type (24.5m). In addition, it was prepared for Russian broad gauge. VEB Waggonbau Bautzen built 18 first class coaches (A4ge), 32 mixed-class coaches (AB4ge), and 69 second class coaches (B4ge). In addition, there were 32 couchette cars (Bc4üe), all allowed for 140 km/h.

At that time, original livery was the usual green with grey roofs. Livery changed when in 1981 the new cream/green livery was introduced. All coaches went into high-valued international long-distance service. Only in later years, these coaches entered low-valued services (w/o changing the livery). Some of them had even taken over by DB (Bauart A504.1, AB508.1, and B17), and only set aside just before year 2000.

Same holds for the "Typ Y" coaches from 1969, and the "Y/B 70" coaches of 1971/73, and even for "Grossraumwagen Gattung Bmh", built from 1978 (1279 items), which were originally planned for national service (in plain green), but were used instead for international traffic, in cream/green livery. After 1990, these coaches were reconstructed for regional traffic (AByu and Byu).

Even the "lange Halberstädter" coaches from 1983 were originally in plain green livery, and only when entering international services, they got that cream/green livery.

And yes, the coaches for "Städteexpress" (successor of "Städteschnellverkehr", connecting East-Berlin with the most important regional cities) were of Y/B 70 type, originally built for CSD. These were in cream/orange livery from the outset (1976).

McZapkie wrote:Thanks for all replies. Freight cars are almost ready, but I have still question about passenger and mail coaches:
1. when MAV blue/white livery appeared?
2. are MAV post coaches blue with red stripe or green with red stripe? How they were painted before blue/white era?

1. Around the end of the USSR, 1990, before then the passenger wagons were simply blue (and before that, back in the steam age, they were black).
2. Before the striped liveries, they were all green. Then in 1984, got the blue with red stripe livery, then in '91 the new ones got the green with red stripe livery, the old ones stay blue-red. (all of them got obsolete in 2004, as the entire post service got trucks instead, but in-game they should stay available I think)

I released v. 6648 on bananas.
Some freight cars are repainted and reorganised, normal gauge freight cars have now brake boots and are 2-axle till 3/4 generation. Broad gauge cars are 4-axle (however gauge distinction is not yet implemented).
Locomotives can be refitted to some national liveries and wagons colours are adapting to livery of leading engine (except of some intercity coaches, they can be repainted individually).
Due to nml and gfx limitations, these liveries are not verbatim as real ones, just more or less similar.
Open cars for bulk cargo does not have 2cc option (because I'm using repainting for different bulk colours). 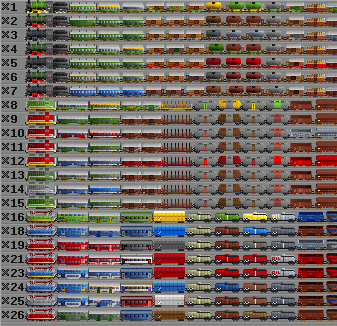