Almost all the Footbridges for the Bitumen Platforms are done. A few lights to add to the bridge as looks like I missed some and some non-track ones to do.

Had a go at making ramps for access to the footbridges. 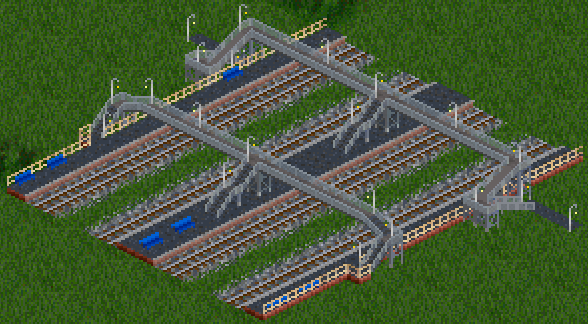 Here the game file but need some lights added and the non-track foorbtridges.

Been planting some flowers. 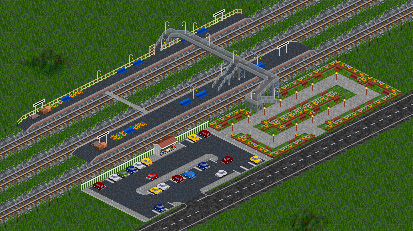 I changed the ground tile as base of the footbridge with the ramps and planted some flowers. These with the concrete path will connect with some of the car parks and other non-track flowers. Flowers come with and without the lamps.

The Footbridge game file is here if like to try. New Platform file and non-track file be in next post.

The next post will have the source to these.

The source to the above game files.

The Platforms (Country and City combined together).

It is for Wide Island Platforms. 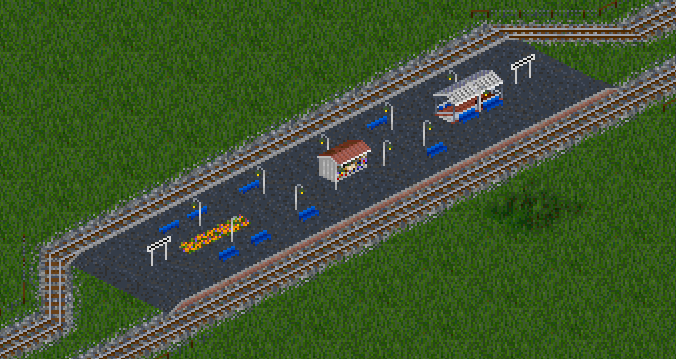 What got me into this idea is there is not enough room to make a nice building on normal Island Platforms. It too squashy and the platform is narrow compared to those for single sided platforms.

So I trying this idea making non-track platforms to go between 2 Single Sided Platform pieces. It will allow more room for nice size buildings.

Thanks for your support. Will keep experimenting with this idea as really like to make it work. Could mean a rebuild of all the other station buildings I did for single sided platforms so that look better with the Island idea.

Shall keep fddling around with buildings and also looking at photos I have taken of railway stations to get some ideas.

Still working on ideas for the wider platforms.

Many Stations in Australia are of similar design and have pylons to support the awnings that extend out onto the platforms. The platforms at these stations are also wider compared to many city stations

Like in this photo of Uralla Railway Station. (Photo courtesy of NSWRail.net at https://www.nswrail.net/lines/nsw-lines.php). 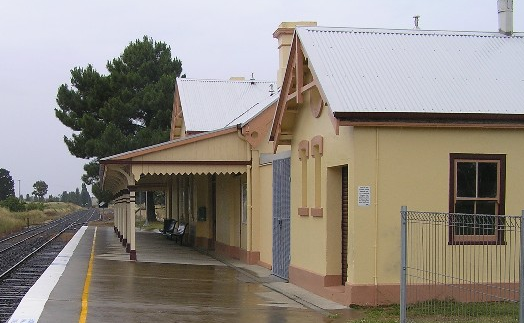 So I have some experimenting to do. How to make my platforms wider so can use those awning with the pylons

Is that possible? If so, I most likely would - never would have considered to ask about that because I did not think it was possible. It would help in various places, though, where the alternative would be to tear down half a village or do major landscaping in order to fit a station.
My screenshots
Top

Valle wrote: ↑
25 Mar 2020 16:25
Is that possible? If so, I most likely would - never would have considered to ask about that because I did not think it was possible. It would help in various places, though, where the alternative would be to tear down half a village or do major landscaping in order to fit a station.

KahlilGibran wrote: ↑
07 May 2020 09:49
hi, is it possible for you to merge all these newgrfs into one ? i only have one slot left. also is it possible to extend newgrf limit ?

It designed for mostly road vehicles with some of the pieces will link to railways and roads.

If you visit my " AuzObjects " and view the last few pages you will see many images of what s available in this set. There is also a object set of most of the items in this set.

In this set you will find: 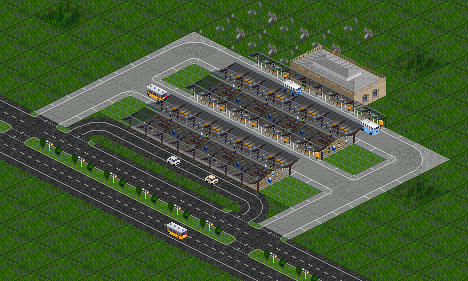 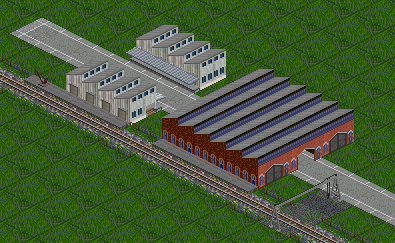 Container Cranes for rail, rail and road and just road.

I hope to add more to this set in coming weeks.

In mean time here the game file if like to try.

Hope you like and let me know of any thing else could add or any errors I made.

Made a few more non-track terminals for the AuzBusAndTruckTerminals.

There are 2 new bus terminals.

and a truck terminal.

There is plenty Bus Terminals but still haven't made any older style which hope to try working on after the weekend.

Like to add a few more truck terminals as well.

Here is the latest game file for you to try.

So I trying this idea making non-track platforms to go between 2 Single Sided Platform pieces. It will allow more room for nice size buildings.

The track that needs to loop around the platform a bit like they are in real.

I propose a width of three tiles, then the entry and exit of the station will be aligned. It was well done at Newstations.grf
Top

These probable could also be used for underground railway as well.

I place 4 bus stations sunken into the ground. 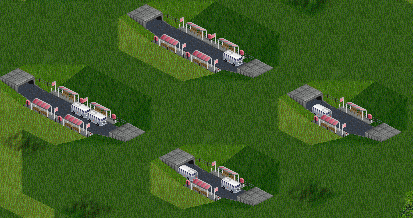 Then I covered them with what Subway Bus Stations I made so far.

The brick building can be 2 or 3 tiles long, probably could be wider too, but didn't try that yet.

The green building needs to be 3 tiles long and as wide as you like. This image shows it 2 wide.

There are subway escalators inside those building for people to access the bus stops underground.

There are pathways with and without people. and as can be seen also includes some subway entrance stairs.

This Auz Bus and Truck Terminals has been updated with all the Bus Terminals done so far. I hope over the weekend to update it with the remaining Truck Terminals and Warehouses that can be found in the AuzObjectsAddOns.

See only 11 down loaded the game file so should be ok to upload a newer version. Be n o more uploads of this file for sometimes as have other projects to work on.

It has many of the Truck Terminals and some Warehouses.

Has these new ones as well.
* The blue ones are single 1x1 tiles.
* The white and green roof is a 2x1 and those ground tiles in front of it are 1x1 tiles
* The grey buildings are from my Industrial set .. the Wool Sheds. These are 2x1 tiles so can have as many side by side as you like.

The following was not transferred from the AuzObjectAddOns:
* Bus Bays
* Trucks
* Warehouses that go on slope and water.
* large truck terminals of 2x2 and larger .. (these might be coded in at a later date)

My bedtime so good night all

we can't let the trains miss out of these new bus and truck terminals .. I seeing if I can make matching station platforms.

For the white distribution center got this result. 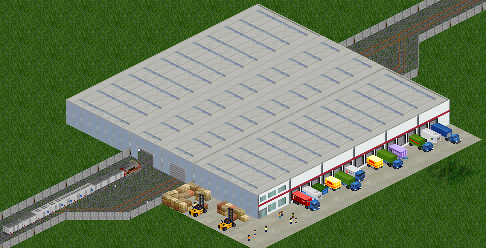 The doors to the distribution center and path aware and will open when train approaches .. shame not able do that for the trucks when they approach.

I'll make some more before I upload the game file.

Here another distribution center for trucks and trains.

The pieces are 1x1 tiles except 1 overlap piece which is 1x2 long. 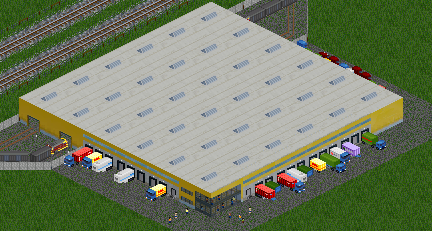 I should have made the white one as 1x1 tiles as it allows a better design if want loading bays on all sides.

The overlap pieces not shown in this image. Not sure if the overlap will be needed, but it there if you do need to use.

The section where the train is a platform with path aware doors. The doors will open on approach of a train and close when the train leaves.

Hope have these ready by tomorrow so can use over the weekend.

You can try out the new Distribution Center as well as the change I made to the white set.

This new yellow one and the white distribution Centers both have path aware platforms for trains. The platform looks like part of the buildings and the trains go inside the building to load and unload. 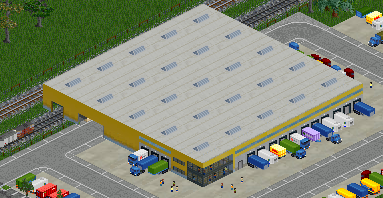 This file is getting full .. so before I add anything else I will have a think for a while what best to add next.