A new set of objects been uploaded to BaNaNas.

All old object versions have the word OBSOLETE marked on them.

Page 24 of this forum also has the latest versions as well as the source files.

I hope not to add any more to these object files unless any errors have been found.

My next object set will be called AuzObjectsAdd_Ons. It will have any new additions for the sets already released.

Hope you enjoy them as much as I do making them.

I am redoing the whole set due to a computer crash I had and lost a lot of data of new objects I had done and corrupted a spreadsheet I record or the work I doing.

The easiest way if for me to start from scratch.

First I will separate all I done of each type of object and once I got them in some kind of order, than to join what I can.

Some of the single sets will be:

CarParks, Creeks, Depot Extensions, Electricity (Includes Telephone poles), Farms, Fences, Industry (making this to go with a Industry set I making called AuzInd2019 where you build your own Industries .. it can also be used with other Indusytry sets such as FIRS as that where I getting most of my buildings from), Rail, Roads, Landscapes and Water.

Credits .. where do I start as so many people have helped me with all my projects.

I started out back in May 2015 using sprites from many sources to practice with.

So to start with like to give credit and thanks to the makers of the following NewGRFs.

These People who have helped me in one form or another:

Sorry if I left any one out, if your name should be listed and it is not, please let me know so I can add you too.

Now I have the objects separated into their own files for now .. gives me plenty room to add to them.

Start with the Fences seeing if I can make a stone fence that I seen in movies and documentaries in the UK and European countries and may also be in other countries too.
They are 4 pixels high the 5th pixel suppose to represent the top of the stones.

Those of you who live in the countries with stone fences can let me know if you think these are ok. They have some green moss (grass) growing on them to give a old effect. 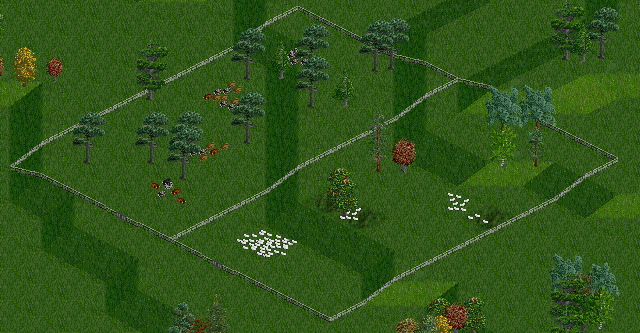 These fences courtesy of OpenGFX + Landscape.

If you want a sample of what I doing here is 5 NewGRF files for Bridges And Embankments, Electricity, Farms, Fences and Rail.

Before these get to Banana will wait till I finish the other sets and then I like to add something new to each set before officially releasing them.

Has a few new houses .. more will be added later.

This set so far has 14 types of house, Motor-Inn, Pub (Hotel), FastFood Outlet, Churches, schools, 18 types of other buildings which shops with flats (units) upstairs, commercial, office buildings and a Post Office, Rear laneways and car parking, Playground and parks and phone booths on some corners.

Here's sample 1 of this set.

Finished making the different AuzObjects sets and unfortunately there is 12 sets .. wayyyy to many ,.. especially if your like me and load as many NewGRF files into your game as possible.

There are several small sets which I will combine and call them AuzObjects_LandAndWater.

The NewObjects Sets now are:

I got 10 sets made for the AuzObjects sets .. slowly adding new objects to these sets. Be a few more days or more before I put them on Bananas as want to add something new to each set.

Here they are if you like to try them.

It has Embankments, Fake Bridges and Culverts

Has has 3 differerent objects sets:

Electricity: Different types of Electrical power poles with wires and sub-stations. Also has some telephone wires that can be used with McZapkie's WIRED.

Recration/Leisure: Golf Course and other sports, and Tents, Caravans and Log Cabins.

Has a variety of landscape and terrain tiles, many of them are slope aware.
Also has Fake Rivers, Creeks and Lakes

Has houses, shops, Parks and Playgrounds, Schools, Churches and more.

Anyone like to chip in and make some objects for these sets your welcome to do so.

Pic of new Locomotive Workshops that been added to the AuzObjects_Rail above. 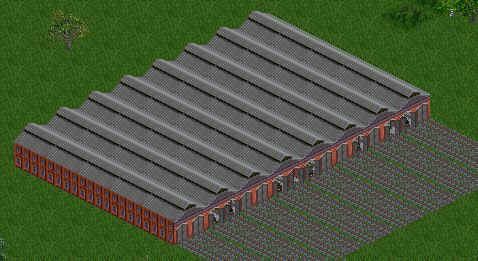 They designed to go with the AuzObjects_FakeRailwysLines.

At this pace you'll also hit the GRF limit at some point ^^;

Love those sandstone block tiles. Some of your landscape tiles look too ... 3D-ish or something to me; kinda hard to pinpoint exactly what bothers me about them, but, anyway, those sandstone ones I really like

Pyoro wrote:At this pace you'll also hit the GRF limit at some point ^^;

A bit concerned about this happening again too ..

It is using codes like this that interfered before so been removing many as possible:


One of the reasons I like putting them in the forum first for members to try and see if they have any problems as we all play the game that little bit different and we use different NEWGRFs in our games.

Might work perfect my style of play but not necessary work good for other players.


Pyoro wrote:Love those sandstone block tiles. Some of your landscape tiles look too ... 3D-ish or something to me; kinda hard to pinpoint exactly what bothers me about them, but, anyway, those sandstone ones I really like

Thanks for complement .. if you figure out what it is that bothers you with some of the landscapes let me know, maybe they can be changed a bit if need.

What my plans for more objects:

Make some small wooden culverts same size as the concrete and brick one.

There a few combinations still to be made.
Also hope to make some fake sidings with Catenary and wires.

Make some US Road designs.
The game has car parking lots but no Bus Terminal Parking lots.
Fake service stations (Petrol Stations) big enough to allow buses and trucks to use. (If successful might make a good Industry for AuzInd160 to).

Make some Fake EMUs and add some more Locomotives so you be able to make up a train n the sidings as if it ready to depart.

Make some low stone fences.
Also thinking the idea to move the fences into the middle of the tiles instead being on edge .. put them in the middle so the tile space not wasted. Also think they will look better if you want security fences around Industries.

The Utility Power Poles .. like to make another set lower then these and the arms not so wide .. make them look like telephone poles .. also want this idea for use along side railway lines. Those of you who seen the wires that follow railway lines would has seen masses of wires for working safe working instruments and phones.

Also been asked if I could make a Hydro Power station.

WaterFeatures: Like to add some more Fake ships. Add some pleasure craft to water tiles. Add Warehouses and some other buildings found in Ports and Harbours to store Import and Export cargos. The Wharves I have made, so some weathered ones too.

Add a few buildings that are found in Locomotive Depots such as repair shops, Crew Barracks, office buildings.
Make a few more railway stations and see if I can make some old style cranes for loading and unloading freight wagons.

Seeing if I can make a set of Safeworking and Telephone wires to follow the railway lines.

Only done the wires along the flats running NW to SE and SW to NE at moment. These are overlap wires. This to allow placing of a signal box or a staff hut near the wires.

Problem I having is if Signal Box placed at over end like this. 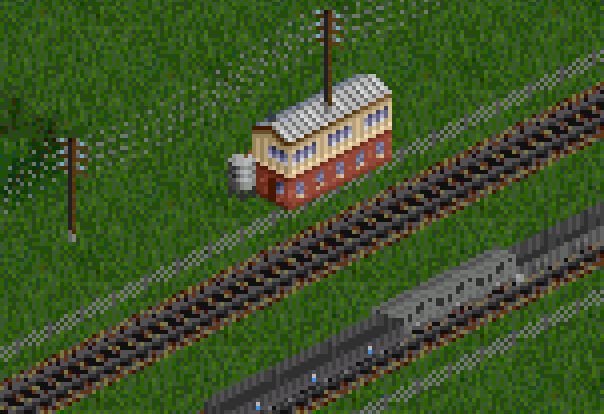 The post is sitting on the roof at the overlap section.

Hope I can find the problem to fix this.

The problem with the signal box and the poles might be due to bounding boxes. Have you set them correctly?


GarryG wrote:Thanks for complement .. if you figure out what it is that bothers you with some of the landscapes let me know, maybe they can be changed a bit if need.

I really don't know how to explain it precisely. Like: 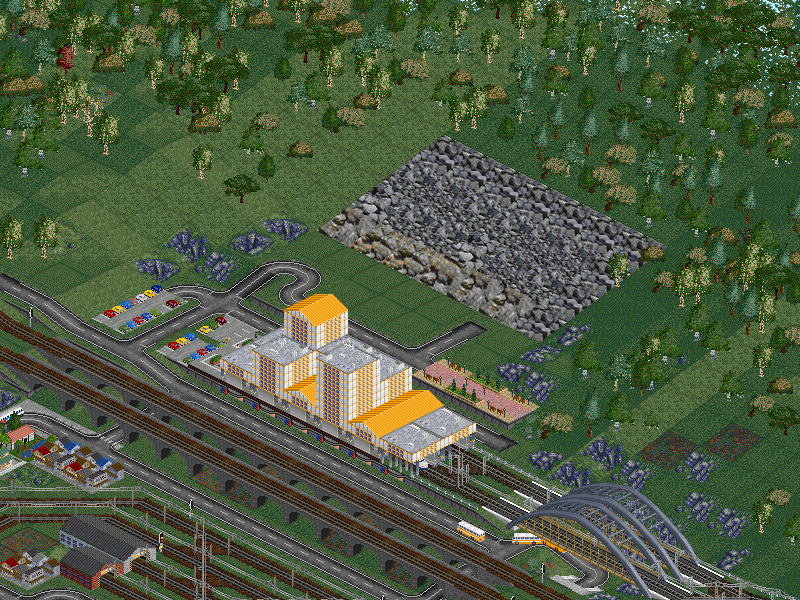 Those for example. I know people have vastly differently aesthetic senses when it comes to things like that, but to me the rocks look almost like someone glued a photograph on the cliff. A bit like 90-style graphic when some games tried being "photorealistic", but the graphics weren't yet good enough to pull it off. In any case, it kinda clashes with the default TTD styles (classic TTD more so than OpenGFX+ I think. Err. Even if this is Japanese landscape, but that's fairly similar to the OTT style), which are much less "realistic".

I think for me, they'd actually need to be less plastic, less vivid to fit with the others, but I wouldn't even know where to start ^^;
Top

Pyoro wrote:The problem with the signal box and the poles might be due to bounding boxes. Have you set them correctly?

I got no idea on the coding how to set the bounding boxes, I thought I put this question over in the NML - a Newgrf Meta Language section .. now I know why been no answer as it not there.

I changed the sprite layouts

Thinking by setting the zextent to 0 might have worked. But unfortunately it didn't.

Pyoro wrote:I really don't know how to explain it precisely. Like:

Hrm, that's unfortunately not something I'm particularly familiar with either. zextend should be the height in pixels though, so technically all you need to do is count pixels and set it to that. x/yextend are given in 1/16th fraction of the tile. Not sure the item property height changes things about drawing; I think that should be set to 1/8th the actual pixels (so a 16 pixel pole would be height 2).

But in any case I'd think the problem in the case of the screenshot would be the signal box in front, not the pole in the back. You could try turning on the bounding boxes ingame and see if that helps figuring it out ^^;
Top

I think the main problem with the rocks is the fact that it's all just cut off right at the edge of the tile. Only real way to fix that is to make another set of tiles that feathers/thins them out so that the ground sprite comes through. Quast65's Beach Objects does this for sand, for example. The downside is that it's a whole 'nother mess of tiles that have to be made in order to get the aesthetics looking right.
Do you like drones, quadcopters & flying toys? Check out Drone Strike Force!