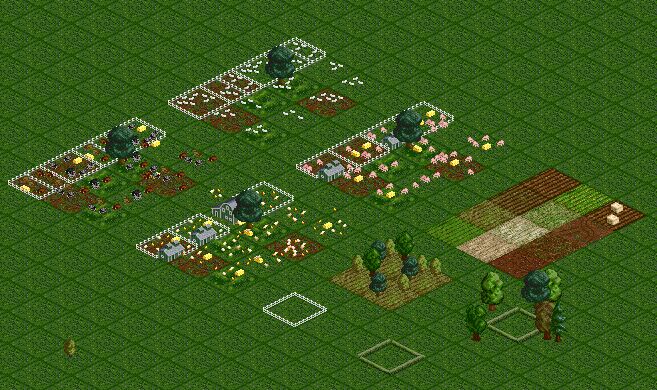 Most tiles are sloped, some aren't. Trees and groundtiles should be climate/newGRF compatible. Fences/hedges are supposed to build "from the outside", so no corner pieces included for now. I really don't like how that basically leaves an empty tile, but what can you do ...
Some objects aren't exactly "inside" their tile/use multiple tiles- that's more or less on purpose. Creates more natural scenes and makes some overlapping possible - animals shouldn't be too orderly. Can possibly cause glitches, though, I guess.

Graphics that aren't only referenced by their sprite number are taken from the FIRS Industry Replacement Set - credits to the original artists ("andythenorth and others" ^^;) (btw, those chickens(?) are genius). Therefor obviously this GRF is also licensed under GPLv2.

In all honesty though, I'm not too familiar with this licensing stuff, so if something is missing or incorrect speak up. Firstborn will be sacrificed once I actually have one.
Top

Was just thinking i'd love this to keep towns growing too deep into farm fields along access roads! Great work!

For fences - maybe you could take code from the auto-fencing tile object in ogfx+ objects? if it saw any other of your farm objects as similar then it shouldn't fence between it and them, only on the periphery.

That always bothers me as well. Unfortunately it's not that well-suited for blocking town-growth into farms; I mean, obviously there's many semi-solutions to go about it, but the "real" farm fields will auto-fence themselves against the NewObjects ones and of course the NewObjections ones don't change over time like the actual ones do, so it's still a bit tricky to get it to look perfect.

For fences - maybe you could take code from the auto-fencing tile object in ogfx+ objects? if it saw any other of your farm objects as similar then it shouldn't fence between it and them, only on the periphery.

Interesting; sounds like something to look at. On the other hand; I prefer my fields without fences, I usually only fence animals where it's not really sensible to place some on every tile. Guess a seemingly empty tile would work to work around this. Mh ^^ 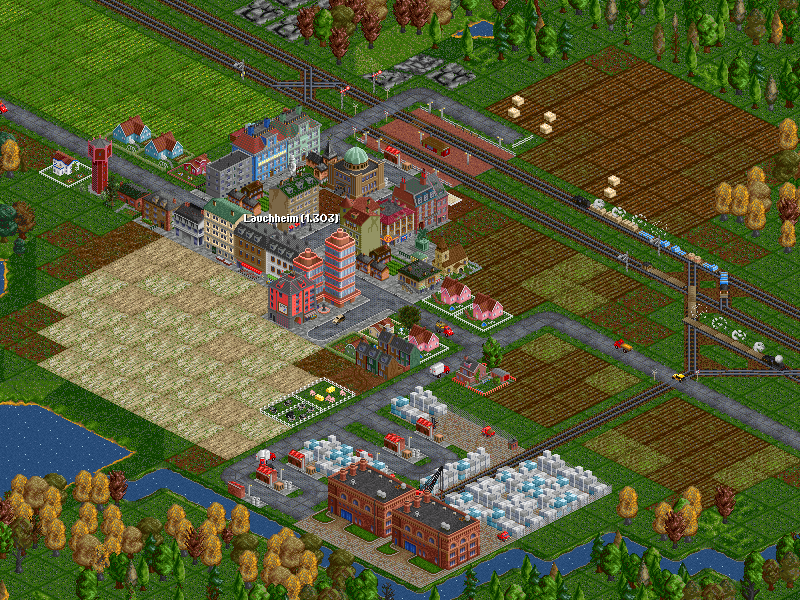 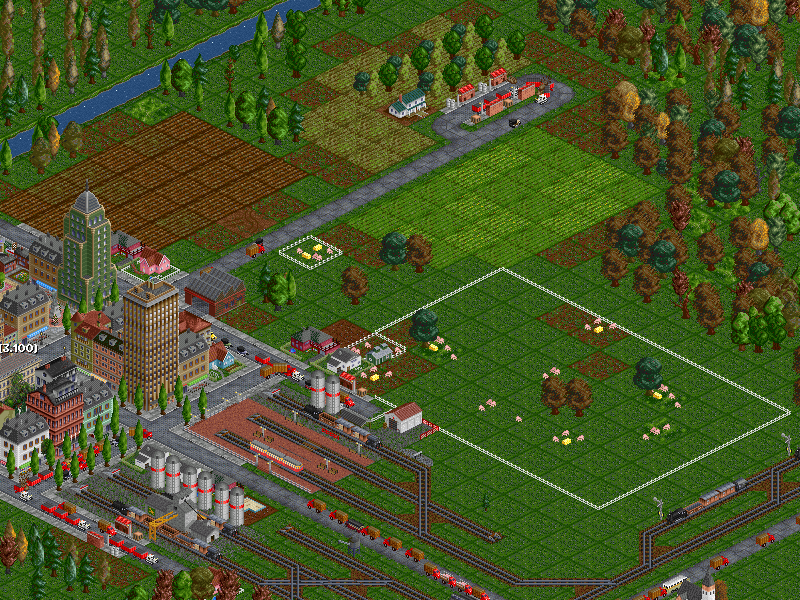 Thanks! That would have been me

I especially like the baby chicks, they're only 5 pixels!
If you like I also have some geese which I believe never made it into FIRS. See the attached file if you want to use them. In the file you can also see a crude version of the sheep. Don't use them. Current FIRS sheep are better.
From the file it appears that the hay bales are also mine, but I'm not quite sure about the bigger one.

Nice NewGRF by the way. I've always found the farms in FIRS to be a bit small. Bigger ones as an industry are impractical because you can't resize them. With this however that's entirely possible!

Well, this was the bulk of my "Better Farms and Gardens" NewGRF I was planning to make... one day... when I first thought of it four years ago...

Great job! Now I don't have to worry about never making it, I can just play it. SCHAWEET!
Do you like drones, quadcopters & flying toys? Check out Drone Strike Force!

Is there still no drag & drop placement for newobjects? I'll use these, but it would be so much better if I didn't have to click for every single tile I want to place...
Eyecandy Road Vehicles | Fake Subways | Supercheese's NewObjects

I don't think anything has changed regarding NewObject usability. It's still also not possible to pin the NewObject build menu and when you want to use the dynamite tool you'll still have to re-open it...
...although all of these tiles here are build-over enabled, at least ^^;

²kamnet
Thanks. Took me all morning to do this - and I've also thought about creating it since first posting emptyGRF, which was like ... what, 2 or 3 years ago? Jesus, time flies ...

²FooBar
That's why pixel art is so great

Those crude sheep look a bit like donkeys/horses/alpacas, tbh. Maybe I'll try something with them. And I don't see why geese should be excluded, so I'll treat them to some tiles at the next opportunity as well

€:²YNM
Sorry, totally overlooked your post. I'd assume so.
Top

So, geese are done and a few vehicles from IRS that fit the theme ... 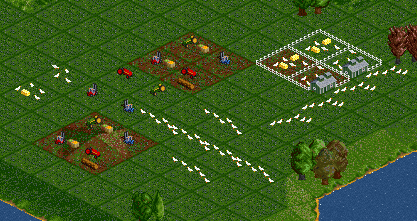 ... but I'm thinking it'd be better if they had more groundsprite variations (like a tractor on a field sprite for example). I'm not sure how to do this though - I guess random_switch would be one option? Then rebuild the thing until you get what you need? Alternatively, could it perhaps somehow use the same groundsprite as, maybe, the SW-neighboring tile? No idea how I'd do that though ...

In any case, maybe someone has some suggestion concerning this. Otherwise the menu gets really bloated

True, but only 4 per item, right? There's (disregarding other potential groundsprite types) 8 different farm groundsprites, so for like 4 objects that's already 8 menu items. With the only difference of having a slightly different groundsprite. That seems to be a bit impractical to me. Maybe. Of course randomly having to rebuild stuff can also be annoying and anything that's choosing automatic will inevitably fail in some use-cases...
Top

Oh well, didn't manage to figure out any solution so I went with the old "let's just go with a random pre-selection". Mhmm. Sometimes I'm disappointed in myself

Anyways, here's the new ones: 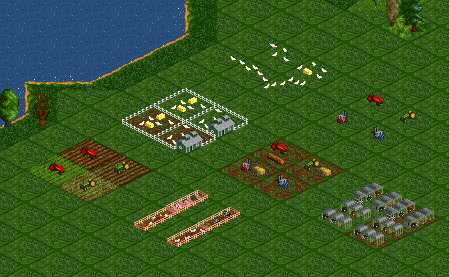 Some geese, some vehicles, some pens. Basically. Some sloped, some groundtile sensitive, some not. I'm sure you'll figure it out ^^;

funny how the geese are the size of a car

Well, if the media didn't cover it up so well we'd all already know about car-sized geese taking over the world. At least we can spread the news through OTTD - the end is nigh!
Top

Since there's been a disappointing lack of "help, I used this GRF and my computer exploded!" reports I've uploaded this and EmptyGRF to BaNaNas. Maybe now it'll actually destroy something make someone furios happy.
Top

Delighted to see this on Bananarama!
Official TT-Dave Fan Club

In preparation of forests(tm) I went back to (slightly) improve change the other two pointless GRFs:

- now uses a different object category (FARM)
- some more plantations (different FIRS climates and for people playing with the base industry set. Why do I get the feeling FIRS only uses a different ground tile 'cause that already had sloped graphics available?

)
- a bit of snow awareness here or there (basically snowy trees where applicable. Farm tiles themselves are obviously heated and don't freeze over)
- a bit of sorting around the amazing code ^^

OpenGFX screenshot for a change 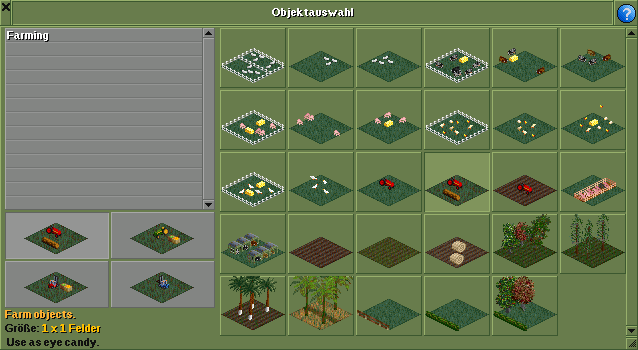 I'll update the file on bananas once I'm done with everything else. Might still think of some things to adjust before then, who knows. ^^