Bonjour and Apples,
This here is Project 1000 - the updated, NARS compatible* version of the UK Renewal Set. Featuring NARS-style variable running costs, a 19th-century start date (1870), and slightly rescaled vehicles to represent the difference in loading gauge between the UK and the rest of the world. You can find more information on my wiki: http://users.tt-forums.net/pikka/wiki/i ... oject_1000

The latest version is v1.05, 2nd of January 2013, downloadable from BaNaNaS. This GRF is NOT compatible with TTDPatch. 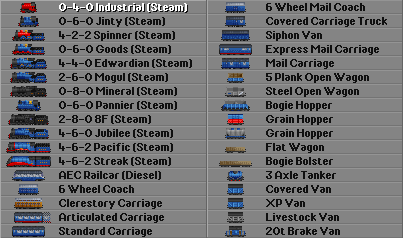 Version pa 0.1 includes all steam locomotives and steam-era rolling stock, complete up to 1950 or so. Hopefully I'll be updating regularly over the next couple of weeks, and have a full beta version done by the time I head overseas at the end of November.

Please feel free to download, have a play, and let me know what you think, what you like or don't like, and what you think could be improved. There are no description texts in the buy menu, for example; I'm not sure yet what, if anything, should go there. I'm aiming for simplicity and "gameplay" rather than complexity and "realism".

Ooh, I like that new rolling stock! I may have to do a UK game soon.

Any plans on pushing it back to the 1830s eventually even if its after Nov?

Loving the detail on the new graphics. Nice one Pikka.
My OpenTTD screenshot thread.

Nice job, when this is done it will complete a UKRS game, the pre-1920 trains look great, and I like the new varied approach to passenger carriages, I like how the Clerestory carriage is brown and not CC, maybe make some of the other wagons non CC as not all the wagons would match the CC, like in NARS.

Great start, can't wait for the next update.

Sounds like a large group of screenshot topic makers will be happy very soon.

Pikka I think there is some adjustments that must be tended to.
First Industrial and Goods engines should come out in the 1870, so your not stuck with the sluggish and lousy on hills single.
Second the standard coach and the Express mail car could have 1-2 pixels trimmed off. They look too long for my liking.
Other that Bravo!

Definitely no chance of a 2-10-0? The very last BR steam loco (Evening Star) was one.
Top

I Might make an add-on That includes it with the Eurostar, The delic and the class 67.
Something goes here, hell if I know.
Top

Thanks for the feedback, guys.

maybe make some of the other wagons non CC as not all the wagons would match the CC, like in NARS

A lot of the freight cars have little or no CC. The 5PO has 4 different liveries, only one of which is CC.

First Industrial and Goods engines should come out in the 1870, so your not stuck with the sluggish and lousy on hills single.

This kind of sums it up really. The problem with early start dates is people will want to use them, and will be disappointed. I won't say I won't push the start date back to 1850, and I have worked out which locos I would include if I did (this this and this), but I don't want to put too much effort into trains that won't get much use. There's also the rolling stock to consider.


Second the standard coach and the Express mail car could have 1-2 pixels trimmed off.

They're the standard 32px, half-tile length. Vehicle sizes go in 4px increments, the next smallest possible size is the 7/8 length of the Clerestory, Siphon etc.

I didn't think it got much use in the UKRS, but I won't say there's no chance, no.

Comm Cody wrote:I Might make an add-on That includes it with the Eurostar, The delic and the class 67.

While I want to keep the main set balanced and simple, if anyone wants to draw any* UK locomotive or rolling stock of any era, I will include it in the addon set, providing the sprites are up to quality, match in scale, and are laid out on a template. I'll make a seperate thread for the addon pack where people can post sprites, after the beta of the main set is done.

Addon artists should feel free to modify my sprites rather than drawing from scratch, if they want to.

I must say that this is truly excellent and I look forward with great anticipation to the future revisions with the electrics and everything!

Id vote for this en.wikipedia.org/wiki/GWR_Iron_Duke_Class 1847 and its successor The Rover Class tho 0-6-0s were also dirt common.

Ive been dredging tech books and wikis all the web over putting non diesel locomotives into a spreadsheet. Thus far Im 90% done with base lists on PRR (USA) and GWR (UK). Next up are LNER (UK) GN (UK) and SP(US). Its hard to find TEs for pre 1880 so early early lacks TE in my charts... for now. I have yet to see a HP rating pre 1920 when dynos seem to have caught on.

Doing it with an eye for doing my own sets but thus far coding give me tons of errors and my 45 degree sprites look stinky. (callback for articulated steam loco tender ugh!) Working it tho... eventually
Top

Will this eventually include only the engines included in the current version of the UKRS? But just made to different specifications? Or will there be additional engines added?
"You would make a ship sail against the winds and currents by lighting a bon-fire under her deck? I have no time for such nonsense." - Napoleon, on Robert Fulton's Steamship
Top

Class93 wrote:Will this eventually include only the engines included in the current version of the UKRS? But just made to different specifications? Or will there be additional engines added?

Which locomotives are to be included is outlined on the wiki.

ps, I have no time for apocryphal quotations.

Great work. There is a small issue of the passenger coaches only changing colour with the Freight colour choice, but otherwise an exciting set for sure.

I didn't think it got much use in the UKRS, but I won't say there's no chance, no.

That's cool. My grandad drove "Evening Star" on the very last Pines Express service on the Somerset and Dorset Railway, and a 2-10-0 would make my stupidly large scale OTTD recreation work a lot better.

I thought some more detailed feedback was in order from me.

I didn't notice how the livery was maintained down the train, I tried it out and presumed only one livery, I was wrong. It took me by surprise when my liveries started randomly changing on my wagons, It's a very nice feature, as if the wagons are wearing and being replaced/reliveried (great idea with the TTD livery). I'm not sure if its something new but I was impressed to see the hoppers opening up the train as different hoppers where filled individually and then closing when the train sets off regardless of how full it was. Another great thing I noticed was that on my steel train the steel is not always coils and varies. I noticed the carriages had changing liveries depending on the year like in UKRS, which given the choice of carriages I wasn't expecting, of course variety is always good, and I'm sure there will be plenty of it when the set is done.
I've only played 23 years with the set with the first 2 locomotives, but I've enjoyed every year, I'm sure I'll enjoy all the way up to 1940 too. I must say, keep up the good job I' sure there's plenty of great things I've missed during my (so far) short experience of the set.

As far as additional suggestions go, I'd like to ask what will you do with monorail/maglev, will you be including Transrapid maglev's like in UKRS and NARS, or might I suggest possibly touching on narrow gauge railways?

Are you sure you want to cut out futuristic locomotives, I felt they where all great features to UKRS particularly the wardale, I think some good futuristic locomotives like in UKRS would be perfect, they add an extra 40 years of entertaining gameplay which would be unachievable if you had to keep using the trains from the early 21st century till the end in 2050. I understand that this may not be your highest priority at the moment but if you want I'll save you some time and do some research for futuristic trains which would be used in the UK, find some dates, approximate stats, pictures for you to work on.

Keep up the great work.