Welcome to the British Rail Openttd Set or BROS thread.

Coding Has Begun - The devzone can be found here.

The BROS, which is a set managed by the community, aims to provide a complete set of train graphics of trains that have been used in the United Kingdom (This does not include Ireland). We aim to draw every single locomotive (steam/diesel/electric), every single multiple unit (electric or diesel), every single carriage and wagon as well as almost every train livery that has ever existed!

Development of this set changes quickly, Most Multiple Units are drawn (thanks to Extspotter, Beardie, Doorslammer, Audigex and others) and attention is switching to the locomotives, Ronstar has made a start on the steam locomotives and Doorslammer keeps playing with his 37's and Deltics, but there is still a lot to get involved with!

From the Jubilee to the A4 Pacific, Pacer to Networker, the British Rail OpenTTD Set aims to be the most comprehensive UK rail set for Transport Tycoon Deluxe. Please join and help us make this aim a reality!

We are currently hosted at BROS Forums

Thanks for Reading
BROS Team 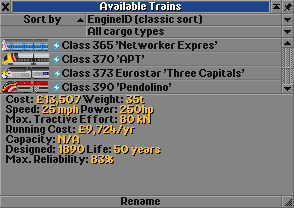 I'm curious about the relation between this and the BR set that already exists, albeit in the TTDP forum. What can this achieve that the older set can't? Will it be drawn in 32bpp perhaps? Thanks!
Top

i think the mail difference is that this set will actually be set into life, and not just on paper as the BR-set

BROS has no leaders and is completely Community driven, it will also be only for Openttd, and will be released hopefully much sooner than BRSet was ever planned to be. Unfortunately i dont think there will be any 32bpp graphics yet.

Oh good! The UK Bus set and the BROS will fit nicely together.
Top

Right here you go: an unofficial I-asked-nobody-and-nobody-asked-me teaser for the BR Set. DJ Nekkid did the same thing for me with HEQS, and it was a nice spur to get the thing done.

Contents: 1 x class 20 in Blue*, courtesy Dan MacK. Completely unrealistic stats, and I won't warrant the code is good, I've never done trains before. I don't know what use it is, but it goes in circles nicely.

* Yep Pikka has already done that. But hey, this one's more...blue 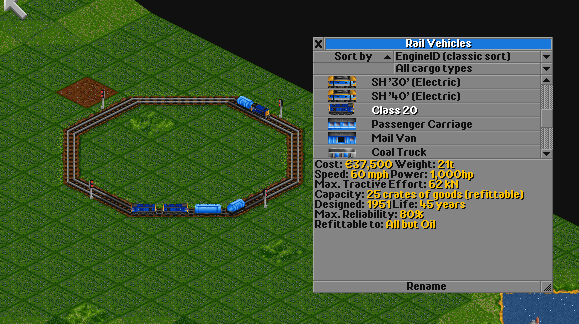 Consider this released in the spirit of the GPL. I haven't included a license.txt so it's not technically GPL compliant. nfo is included, but this is built using planetmaker / Ammler's wonderful make system, so it's not really the source.

I know from personal experience that Dan won't mind me using his sprite, but if you want to use them, you'd better ask him yourself.

Although I am a useless coder/drawer, if you ever need anything tested you can shove it my way

Btw Leanden its Beardie not Beardie27

, also just getting a repo online, and pushing the GPL License

Previously Known As Beardie27
Check out my UPDATED! Screenshot Thread
Check out my Railway Photography and Deviant Account

Apart from the test grf, Beardie recently commited Revision 0 of the BROS to the Devzone:

One of the trains works! Im happy for stuff to be coded as its completed. And sorry beardie, will fix it now

Nice teaser! Is there a list of trains on the forum to be included?
Top

There's a tracking table, but that's more of a generic one - as far as I know, any train which has/does travel on the UK rail network will be accepted.
Jon
Top

Does this topic have to do with the one in your signature?
Top

Tracking table is still being updated.

Weird isnt it... Potentially we might get a boost if Pikkabird lets us repaint his UKRS models.

Leanden wrote:Weird isnt it... Potentially we might get a boost if Pikkabird lets us repaint his UKRS models.

And he hasn't?? Did you ask him?
Previously Known As Beardie27
Check out my UPDATED! Screenshot Thread
Check out my Railway Photography and Deviant Account

Not yet, thus the use of the word "potentially"

We have permission to use his UKRS wagons already.