Ok, here is my second grf


TTD have some graphic bugs, I've created a .grf which fix some of this bugs. The fixed bugs are:

see also here: http://tt-ms.de/bugs/#ttdgf , you must scroll a little bit down (it's a german page, but with pictures)

Load this grf as early as possible, that other grfs work right 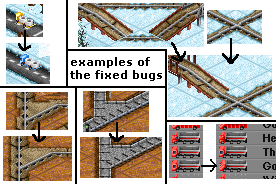 Though I must confess, I hadn't noticed the monorail/maglev glitches before.

Something I did recently notice was with this building:

The sprites yrel value is slightly out (should be -16 instead of -17, but you can't see it in the image because I've already edited the trg1r grf). Perhaps this is something else you could add to a future version of the grf?
My projects: New Town Names | Snow Aware Arctic Buildings | Custom Buildings | Funny Cars | Mini GRFs | Bits & Bobs
Contributions: BK Enhanced Tunnel Set | Fix TTD GRF Bugs | INFRA Foundations | OpenGFX | OpenGFX+ Airports
Other stuff: The GRFs That Time Forgot! | Buildings in Glasgow

oh yes, I didn't notice that before. Any other bugs to fix?
Sorry for my bad english!

I remember when the wrong truck sprites bothered me a lot.

Ok, I've made a new version with the house...

Thanks for the update!

I never knew there was a fix for the trucks 'morphing bug' I called it, shows how much of a newbie I am to you guys.

Your work is appreciated!

I have made a new Version with some addes Fixes. The mainfixes are:

)
- the position of some toyland bridge sprites were wrong


The added non-airport-sprites are all from PaulC, thx for that

Why do you make it a NewGRF instead of a patch for the openttd.grf?

Because the TTDPatch don't use the openttd.grf

ttdpatch uses ttdpatch.grf - which could also be patched correspondingly. Thus you could provide a patch for both, probably easily.

The openttd grf is available via its svn repo - and I'm sure the ttdpatch.grf is also available somewhere so that it can be patched - albeit I don't find it in ttdpatch's repo; maybe someone knows where it is?

A patch for the openttd.grf would be very welcome; the grf is found in the media directory.
It would have the big advantage that people playing in a MP environment could enjoy it, too without finding out how to activate static NewGRFs