The minimum possible version you can get away with running is 1.7 as I use the sprite stack functionality which was introduced in this version. However I'd recommend at least 1.10 as this is the version I test against.
Top

Testing still continues. I spotted another couple of bugs; the APT-P was missing its tilt flag (some may argue this is a realistic depiction of real-world reliability, but Timberwolf's Trains takes a more utopian view) and a multiple unit without any capacity, which may have explained a year or two of poor profits. The line up from Grunwood has now become rather busy, it could do with some expansion: 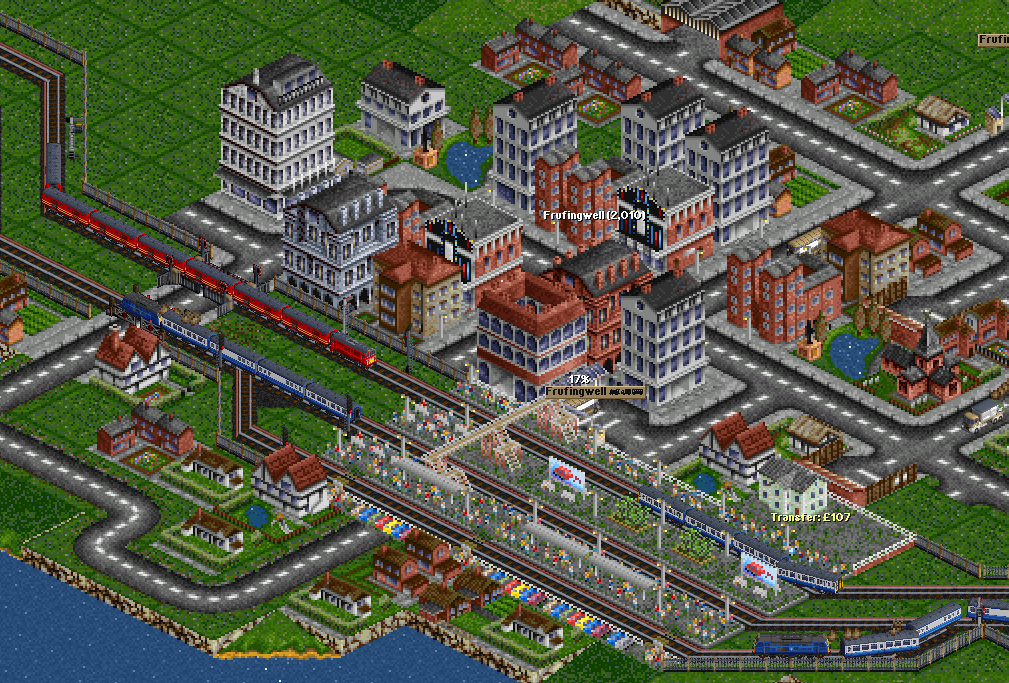 The tail end of 1960s and the 1970s are somewhat sparse for new locomotive introductions outside of the obvious highlights (HSTs, Grids, APTs and the Class 87) but this is a reflection of what was happening on the mainline in this period - I have a few prototypes and oddities I'll fill out the roster with eventually but for now there's a core of around 20 locomotives and MUs you'll be stuck with for a 15 year period, and I don't see much value added by bulking this out with the bazillion sub-varieties of 4-CIG/4-VEP types the Southern Region produced over this time period. With my test game now entering the 1980s I'm looking forward to some good Network South-East representation and the various EWS/Freightliner orders; as I write this my 4-CIG fleet is being auto-replaced by Class 455s.

Providing I don't notice any howlers or insurmountable glitches closing out the last 25 years or so of gameplay, I now only have one major thing I want to fix before the first beta releases go up, which is a particular track sprite conflict with foundations and diagonal tracks:

I already have the mechanism to fix this (clipping the rendered sprites with a mask), I just need to apply it as I found early in development that I was spending ages building pixel-perfect masks only to joggle the sizes or alignments around and ruin all of my work. There are also some rough edges on certain sprites, particularly 1x zoom on a few carriages and multiple units, but I might live with all but the most obvious ones for the first release rather than trying to chase them all down and correct them.

That's about it for this update, my new Class 455s are coming on stream so I'm off to make sure everything goes well with the introduction. 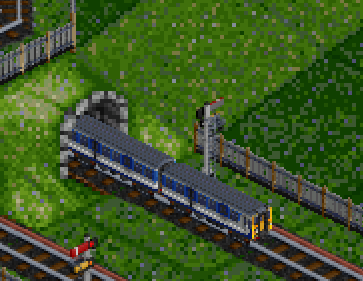 Wonder if there's a class 144 for local use, in WYPTE livery?

Just some random ideas thrown out there, hope some might help.

Oh, and regards to the 1970s and the Southerns cavalcade of Mk1 units, have you thought about the 205s?
Top

I finally reached 2020 in my test game, and I'm satisfied that everything works at least... okay.

There are a quite a few immediate things in need of fixing:
But the good news: it works. It's playable. I found myself sitting back and watching the trains or wanting to take screenshots. So it's good enough to release an alpha and find out what I don't know about that's broken.

Links, for the intrepid:

I recommend using both together, although most rail sets which provide third rail and use standard-ish alignment should work. Have fun!
Top

Been playing it tonight here in Texas and loving it. Only issue I have found so far is I can't find anything that will transport gold in the sub Arctic climate. Is it only supposed to be used in temperate?
Top

Oops, that's an oversight on my part. All those FIRS 4 Steeltown cargo types I tested, then I missed gold...
Top

Also food apparently. But it looks gorgeous and I'm having a blast.
Top

My initial thoughts of the trains so far can basically be summed up into "I love it." I haven't had much opportunity to play a proper game with the set yet, but I'm toying around with it atm, and I'm loving it. The trains look great, and I got used to the extra length faster than I anticipated. Running sounds like in UKRS2 would make it even perfect-er, but I think you already mentioned you would like to include them?

Regarding the cargoes, I'm currently running the Testobject Industry set (No clue what else to call it), which has 64 cargoes. As far as I can tell, all of them can be transported, with the exception of Diamonds, which I can only transport using the GWR Railcar, but I think that's the same issue as with gold as was mentioned before. Food works fine on my end, though.

Anyway, going back to playing with it now, have a screenshot before I go, though! 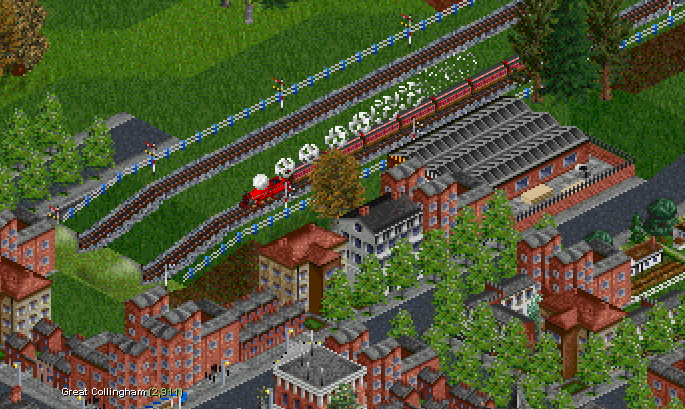 This set is absolutely outstanding, the detail is incredible and there's both quality AND quantity

I look forward to playing a game with this but I'm deep into Japanese stuff at the moment...

Small bug though from some quick testing: a few electrics are buildable on non-electric track, the Raven EF1 and Class 90
--Stuff I made (or helped make)--

I have no words that can describe the joy, amazement and thanks.

I know this is trains but the tracks also need a mention, see line above. (pun

Amazing work, just looking through the roster and this is going to be a lot of fun to play with. Thank you Timberwolf.
Top

Been watching the development of this set. It has inspired me to start using steam locos in my game
Take a look at: http://www.tt-forums.net/viewtopic.php?f=47&t=74993
Top

Thanks for all the kind words. One of the things I find about developing a NewGRF is that I spend most of my time looking at problems with the set - things that don't align properly, pixels in the wrong place, shading issues, bugs... it's nice to be reminded there are good parts as well!

I've fixed some of the bugs mentioned above, most of them had the same root cause with not all cargo classes being set up in my wagon template. The Class 90 and EF1 were using the wrong railtype, should now be fixed. Maybe one day I'll have dedicated reefer wagons for food (probably handled the same way as in Iron Horse, where they have a bonus to transporting perishable items compared to regular wagons) and maybe armoured wagons too if I can find some nice prototypes.

I also added a "powered by" line to the vehicle details so it's easier to see whether something is overhead electric or third rail without needing to build a depot of the relevant type. Note this uses the game settings so the various overhead DC and low-voltage AC locomotives get lumped in with the 25kV AC types - I think this is an acceptable bit of gameplay over realism.

The latest alpha is here:

. It should be drop-in compatible with existing games providing you don't have EF1s or Class 90s running on regular rail, I haven't changed any IDs or stats otherwise.
Top

Just asking, for our info, when will it be on BaNaNas?

Livestock car is an oversight on my part, must have not been paying attention when I set up that part of the tracking table...

As for wider release, I have two gates for those...

"Forum ready" means I've played a game through using one particular industry set and am happy to release it somewhere people understand the GRF development process, will read notes about alignment issues and things still in need of fixing, and give me useful bug reports that make it easy to figure out what happened and why.

"BaNaNaS ready" means I'm confident anyone who downloads it isn't going to encounter a major graphical or gameplay issue within their first few minutes of play, because it's not as obvious where to get support and I think there's a greater expectation of things "just working".

Currently we're definitely more toward the former than the latter, although with the quality of bug reports so far it sounds like it's not going to be too difficult a process getting to that "BaNaNaS ready" point. (Although I'll state it here, alignments and me do not mix.)
Top

Also I really enjoy the little historical context info for the vehicles in the buy menu.
Top

Hi! I would just like to say I absolutely adore the set and it's what I've been wanting for years!

I only have a few criticisms, that being with the liveries - it would be a great addition to be able to run Southern 377s as in game alongside Southern liveried 455s and 456s, sorta takes away from muh immersion

The only other criticism is the Class 444 livery - in what I'm assuming is the correct colours in 2cc for the train, the roof looks overwhelmingly grey? I'm not sure if this is intentional but it's definitely not what it is like irl. 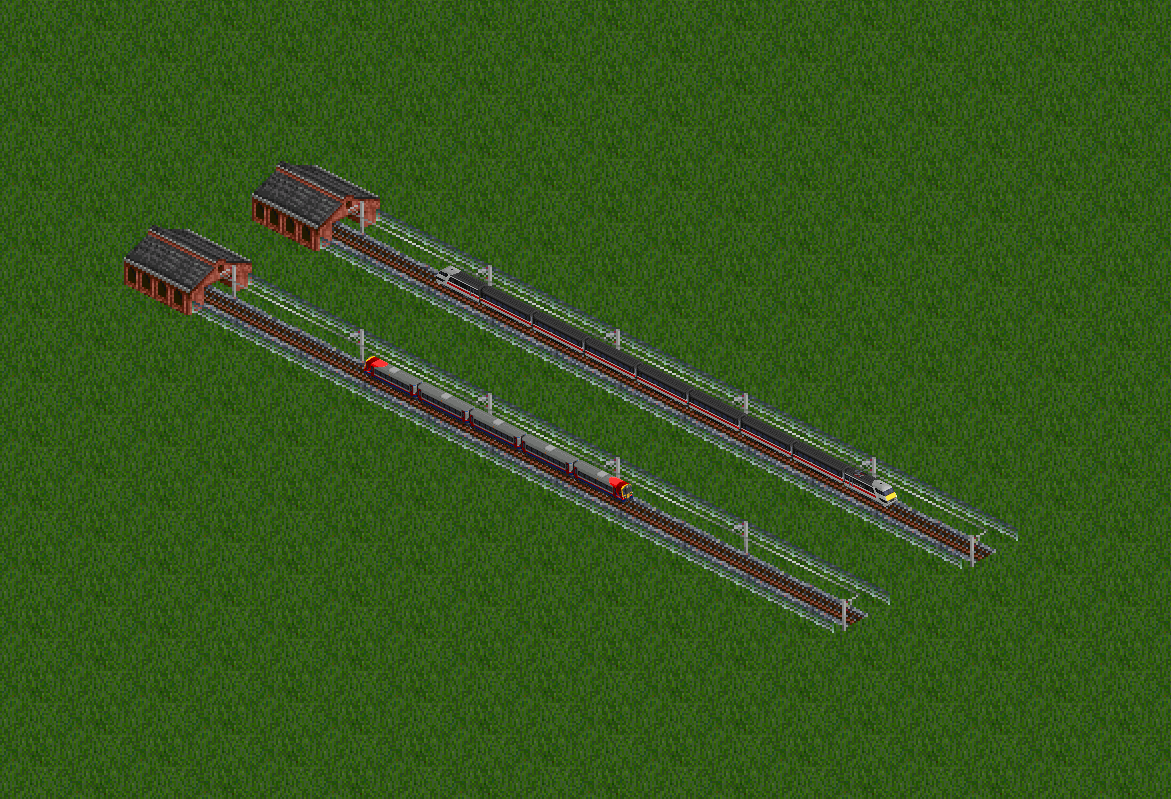 Even saying all that this is my favourite thing for TTD ever and I can't wait to watch it's development!!
Top
Post Reply
79 posts