Someone asked me to draw some bridges, and I did that last weekend. But I couldn't stop, so I've drawn a total of 12

different bridges. Here they are! Hopefully someone can use them. I can't make .nfo files so that needs to be done by someone else. I've included all necessary parts (I hope

) of the brigdes in each bridge's .png file.

Each bridge has it's own min and max length. I've made some suggestions of how a bridge could look like when it has a specific length. (Some bridges are just normal, and so the suggested length wouldn't be more than logical.)

Those roads are just for example. I think (and hope) the rail, monorail and maglev graphics have the same size as the road graphics, so it shouldn't be a problem to replace those roads.

Bridge 1 is based on a photo I saw at this forum. Someone (I forgot who) asked me to draw this bridge, so here it is!

(I thought he/she promised to use it

Bridge 2 is based on bridge 1 and on a Dutch Motorway Bridge (I forgot the name).

Bridge 3 is based on a viaduct over a motorway in the neighbourhood of where I live.

Brige 4 is based on a brige I drew a long time ago on paper, during a vacation, in Germany I thought.

Brige 5 is based on an aqueduct over a highway somewhere in the Netherlands. Although it's now filled up with some road, it should be filled up with water

, but I don't know if aqueducts already are implemented in any TT game (TTD Patch, OTTD, FreeTT, TTU, etc.)

Bridge 6 is based on a highway-viaduct in the Netherlands. Although it doesn't look very special, it's something different.

Bridge 7 is based on a concrete fly-over and a concrete modern railway viaduct.

Bridge 8 is based on nothing

. I just hadn't any realistic inspiration. But we need a futuristic bridge too, don't we?

Bridge 10 is based on a bridge I drew during a vacation a while ago.

Bridge 11 is based on nothing. I just had a crazy idea of putting flashing lights on a bridge. This bridge might be used as a very futuristic bridge.

Bridge 12 is based on the wish of my brother: A glass bridge. 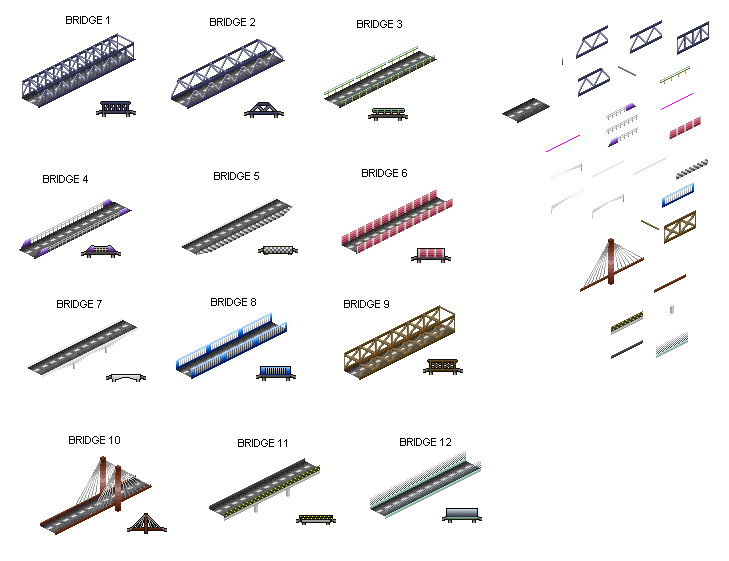 Last edited by Purno on 19 Sep 2005 08:58, edited 1 time in total.
Contributor to the The 2cc Set and Dutch Trainset. Inventor of the Metro concept. Retired Graphics Artist.

/me wonders, can I include some in my roadset?

/me wanna know, which one would you like to include?
Contributor to the The 2cc Set and Dutch Trainset. Inventor of the Metro concept. Retired Graphics Artist.

oh, does it depend on which one

All of them? Do you like them all? Oh, okay, why not including them all?

Hyronymus, you may use them all! (But of course, I want some credit

Of course you'll get credit, that's only more then fair. I'm gonna take a closer look at them this afternoon (after work). Then I'll check if something can be done about the / and \ ramps. There aren't that many ramps available (that's why the supsension bridges are so diverse).

Edit: adding them is gonna be hard. You didn't use the way bridges are stored in grf's. I haven't got a clue how to tackle this now

I'm at work now, but my gues is you have to disasemble them, or wait till a patcher ads some funky new code in adition to eis_os his higher bridges

Trouble is all the bridges share parts of eachother, so I think there could be some trouble getting them all in ttd. Ah well hyronymus can look at it

( *hopes he got the pallete right this time*

But yes those bridges do look nice, and A lot better as that red, making everything behind it invisable, monster bridge that comes ith ttd.
Top

Disassembling sounds like the solution but I'm not gonna do that. It's an immense job + I feel we will fall short on ramps. I think we should ask patchman to start looking into additional bridge graphics.

. I must admid I realy like those bridges, so I might try disasembling one of them to replace that ugly red thing we call a bridge now

broodje wrote:or ofcourse I can send the parts that should be replaced to purno and let him do all the work (muhahahahah)

BTW: Which bridge is your favourite?

EDIT: BTW 2: Which red bridge, you don't mean the concrete one, do you?

bridge 7, 2 and 10. But all of them aren't realy compitable with the curent ttd format, especialy the pillars could be a problem. But i'm at work atm (and yes bored to death

) so I can't look into the matter atm. I will see what I can do when I get home, and send you the details, becouse it could be you have to change some litle things to get it working properly.
Top

broodje wrote:But all of them aren't realy compitable with the curent ttd format,

Bridge 3 should be compatible with the concrete bridge's system.
Contributor to the The 2cc Set and Dutch Trainset. Inventor of the Metro concept. Retired Graphics Artist.

yeah, I was thinking more about bridge 7 for that, but bridge 3 could work, but I'm not sure about the format becouse I can't look at it atm.
I think bridge 10 could replace that yelow thing? hmm would also be nice if it could

/me likes the bridges more and more, I wish I could go home soon

Purno, it was me who asked for those graphics, and I really like them, the problem is the incompatibility stated earlier.

For some time, I've been thinking about writing a guide to replace the bridge graphics, but I hoped(until now) that someone will come up with an elegant solution to simplify this process. This does not seem to be happening, so if you are interested, I will try to assemble something about that topic... Maybe I (or anyone else) could contact Andrex, he has managed to do some very nice bridges, so he must understand it. Perharps he's the one who could do this guide properly.
(You see I do understand the workings, but I'm not an graphic artist, so his explanation should be better...)
Top

I am really suprised ... those bridges looks great but I am missing some 'glass' there

I cannot wait when someone will made GRF file

what are you looking at? it's a signature!
Top

These bridges are absolutely the best bridges for ttd.

SHADOW-XIII wrote:but I am missing some 'glass' there

Glass??? What do you mean?
Contributor to the The 2cc Set and Dutch Trainset. Inventor of the Metro concept. Retired Graphics Artist.

Could these perhaps be used in OpenTTD? Of course, you will get full credit if we decide to use them.