MRoads? Melbourne Roads? Modular Roads? Metabolist Roads? (super)Mop's Roads? I don't know yet, but I've had ideas for a modular system for a road and tramway set that takes some liberties with scale and standards for awhile, and I now have enough basic sprites for a minimum viable NewGRF. 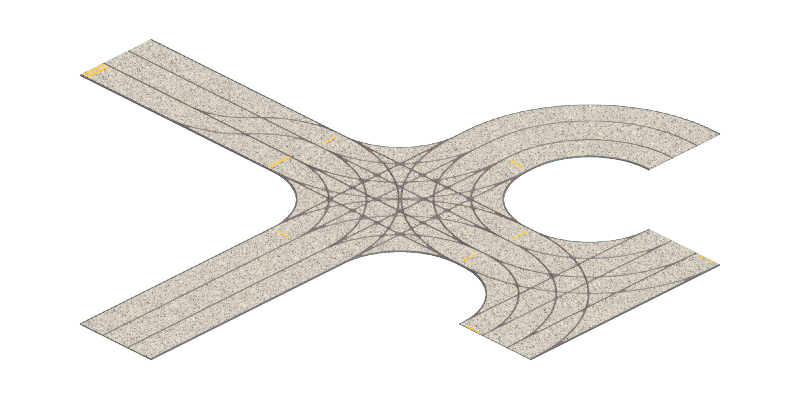 The design goals for this set are:
1. Provide a set of street and tramway sprites based loosely on those in Melbourne, Victoria
2. Use or abuse sidewalk sprites where possible to create more variety between road and tramway in urban areas
3. Allow selection by parameter between more conventional sidewalks, and those that may integrate with specific town or RV sets using unconventional scales or styles
4. Provide regional variation in road markings by parameter
5. Create superfluous sprites in case of eventual introduction of Roadtype specification.

The general stylistic elements of the set include standard gauge tram rails set in concrete with basalt (bluestone) aggregate, with normal traffic pavement in asphalt. Curbs are rendered in honed bluestone with a wide gutter of bluestone cobbles, and sidewalk pavement in either honed bluestone or asphalt. Trolley wire will be dull and minimal. Edges of roads may contain bikelanes similar. Road surface will be drawn wider than normal, as a result, the narrower sidewalk space will give urban tramways more room at edges for pavement to differentiate Tramway and streets. Tramway termini are modeled as fake shunts rather than tight U shaped loops, but of course this does not change vehicle movement. Currently markings are modeled along with road and tramway models, but I may switch to having them composited somehow for switching styles.

I think the tram tracks need to be defined through the replace-extra like in ogfx-extra... I have not done tram tracks yet, but you can find road replacing code in RAWR repository... it is just assigning sprites to sprite IDs

I am almost done with the models for roads, although I still need to make some refinements to textures and add detail (oil and tire stains, manholes etc). I am also still making some adjustments to render exposure, so darkness and coloring may change slightly.

That said, the main areas of remaining work are choosing a style for rural and urban road dead-ends, and selecting a style of sidewalk for urban road curves. I've attached a few options below; with a basic radial curved road giving a large amount of extra sidewalk space, or a more squared off corner, with lots of extra road space. The round corner could have a flower bed or area of groundsprite showing through (mocked up with brown gravel in image), or something else. The square corners could have some parking area, curb cuts for driveways, or perhaps curb drains. As shown, I am not sure how the road paint should follow the corner if it is squared off. I have also modeled urban sidewalks with a more crisp honed bluestone curb, gutter and sidewalk. I make still make this an option via parameter, or some other means. 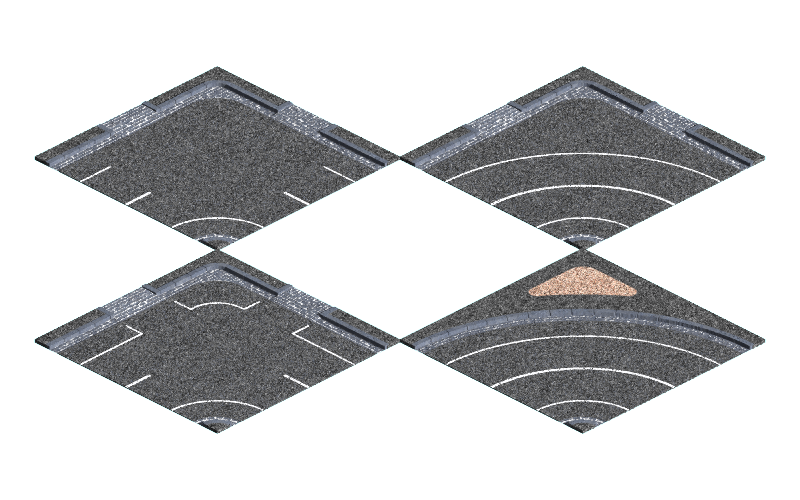 I would try some middle ground between the versions with a BIG round sidewalk in the corner and a nearly squarish road and narrow side walk: the nearly-square one looks a bit strange and the completely round one, there I fear that it looks weired with how vehicles actually move on the tile(s). 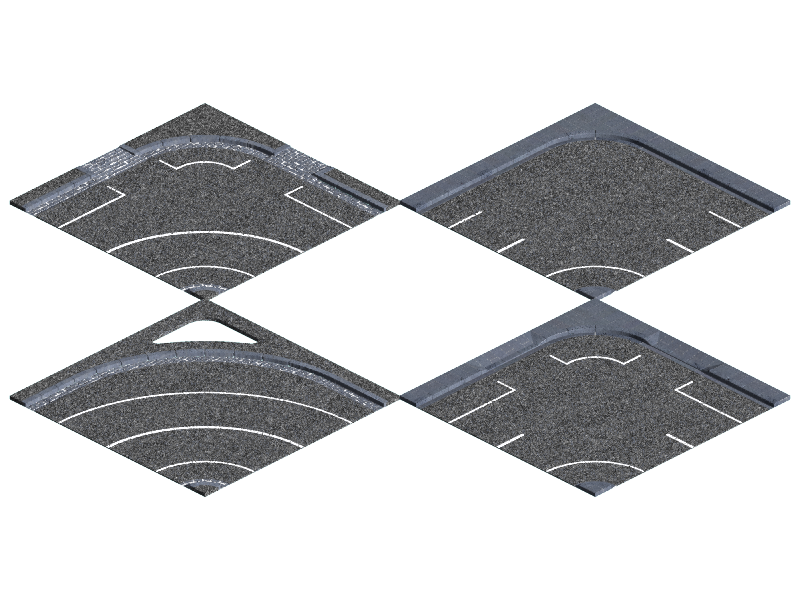 The asphalt sidewalks have radii for the curbstones of 1/3 and 2/3 tile, instead of the earlier 1/1 or 1/12. The honed bluestone sidewalks shown have a 1/4 tile radius.

I am undecided about the driveway cuttings shown here and on the previous image. These are very common on streets in Melbourne due to the city's famous laneways, and I feel they give some added detail to break up the large stretch of sidewalk on the outside of corners. They also could be widened to better accommodate tramway overlay sprites in those cases where a road curves but the tramway continues ahead. However, I am unsure if they look silly or busy - If a town has many road curves they may become superfluous, and players can create their own curb cuts for tram by building short stumps of road.

As for the difference in sidewalk pavement, Ideally these would be differentiated by inner and outer town-zones, but this is not currently possible in game. Alternatively, players could choose one or the other by parameter. I could later also make concrete sidewalks for non-Melbourne regions.

I quite like the bottom left one, myself.
Top


So the 2/3 radius, no driveway with asphalt sidewalks, and 1/4 radius, with driveways with stone sidewalk? Do you have a general preference for or against driveway cuts?

Flygon wrote: I quite like the bottom left one, myself.

Also a preference for no driveways?

I quite like the Bottom left and top right!
IJN Takao is life. Why did the Shinano get converted? Gotta love NeuroTec for Garry's Mod. I even have a server!
How Can Mirrors Be Real If Our Eyes Aren't Real? - Jaden Smith 2014
Top

On the driveways, is it possible to show them only when there isn't a connecting side road, and have it switch to a full intersection if you do connect a road?
Do you like drones, quadcopters & flying toys? Check out Drone Strike Force!

kamnet wrote:On the driveways, is it possible to show them only when there isn't a connecting side road, and have it switch to a full intersection if you do connect a road?

Yes and no... Roads as far as I am aware have no idea what is or is not next to them - I could do a lot more interesting things with one way roads, tramways, and city streets if they could (consider this a weak feature request).
So there is no way to say, build extra stumps of roadbits of a tile and have them show as driveways if no further road is connected. You could however simply always show driveways on the parts of road tiles not occupied by road bits: three driveways on a dead-end, two on corners and straights, one on a T intersection. I considered this to provide for tramways crossing roads perpendicularly, but I fear that a driveway cut may get too visually repetitive if it occurs on every tile of a long straight stretch of road (even though this is somewhat realistic). To accommodate tramways, the driveways would need to be at least as wide as the tram tracks, and centered, which brings us back to the "too square corners" problem.

If I am able to recruit a capable coder, maybe I can convince them to add a parameter for ubiquitous driveways???

so... what's wrong with concentric circles?
You might not exactly be interested in Ferion, but if you are, have fun


In terms of the road paint, or curbs and sidewalks? I think circular corners are fine - but as planetmaker mentioned, I think roadvehicles travel closer to the center of the tile before turning, so it may look like they are driving on the sidewalk?

Also in dense urban areas I rarely see round corners with round curbs, unless it is a case where the building are also curved to follow the road. After looking at some streets yesterday though around my neighborhood, I found a place where a street makes a 90 degree corner - the road paint and bikelanes were concentric and round, but the curb and sidewalk were square. Downtown in the cbd I could not find anyplace where a two-lane road makes a 90 degree corner - only in small laneways, which have no center or edge lines painted on them.

Moving on from corners for now, thinking about laneways! Here are two ideas for dead-end road pieces, with driveway cuts in either asphalt or bluestone: 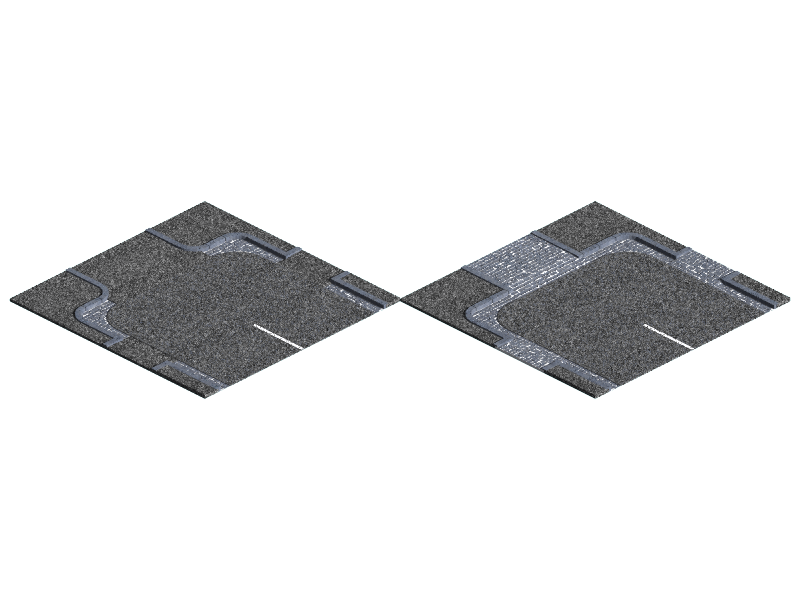 The big driveway at the end is wide enough to fit tram tracks in it. I may want to get rid of the end driveway, the side driveways, or all three.

In the interest of expediency, I've just gone ahead with a few decisions as is for now. Below are the basic roads for rural and urban areas, with an alternate choice for urban sidewalks. 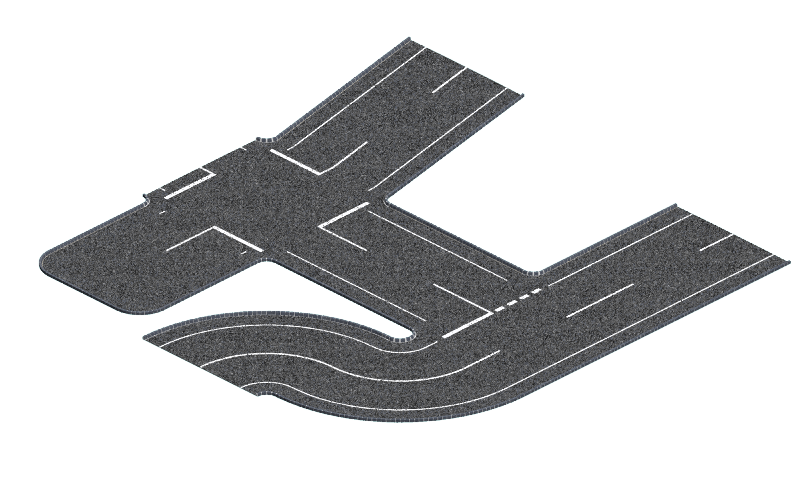 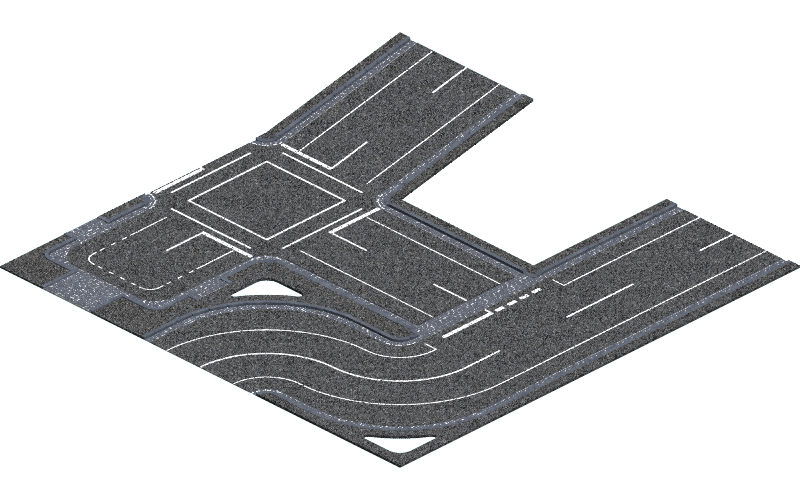 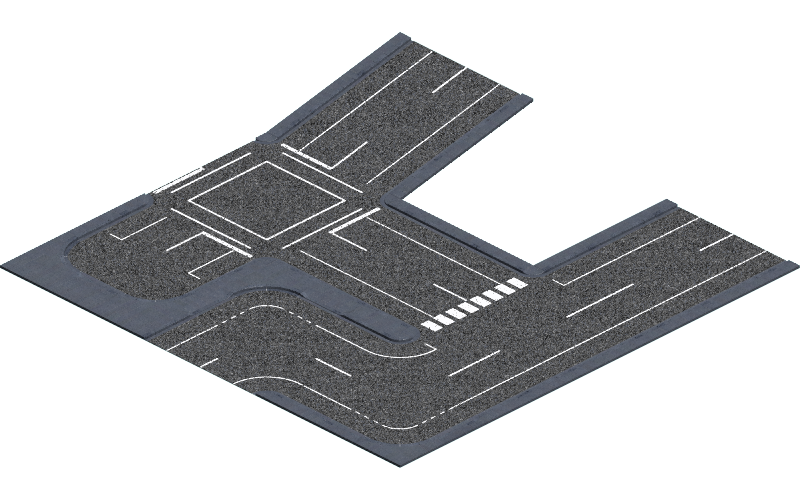 Those look quite nice!
Do you like drones, quadcopters & flying toys? Check out Drone Strike Force!