Michiel wrote:Congrats! I hope it'll stand the test of time. Those stations look really cool! Don't mind if I have a look at how that's done

ChooChoo is supposed to be about making things look good, after all

Good luck on your new projects!

Congrats to you as well with the implementation of NewGRF stations


Lord Aro wrote:is it me, or have you got your AI version numbers in a muddle?
shouldn't this be v2.1.0 or something because you've added a minor feature?
i mean it's (mostly) not a bug fix is it?

You're right to point out that I haven't been very consistent. But with the end of NoCAB development for the foreseeable future I've decided to put the version number to 2.1.0

Kogut wrote:So it may be nice to say WHY it crashes.

If you look at some of my earlier crash posts, its a "HasNext" not found

Thanks, this has been fixed now

Morloth wrote: P.S. This will be the last update for quite a while. I'm going to focus on some other projects at the moment so only if bugs pop up I'll take a look. But for the moment this is the last version of NoCAB for the near future. Thanks for all your feedback!

Thanks for all your frequent updates. I'll find it sad, when this great NoAI should not see the maintenance level it did so far and which can be considered outstanding

Yes, sometimes one has to do different things in order to keep the joy

. Just want to focus on some other games rather than transportation sims, but I'll be bank for sure. Have some good ideas where to take NoCAB next. But if bugs arrive I'll be on standby

) the overflow causes money earned beyond that to be treated as negative. The API makes sure the maximum number returned is 2^31 - 1, but because I also add the money NoCAB can loan this pushes it over the edge.
* Deleted all references to 'HasNext' to avoid any problems with future versions of OpenTTD.
* Better demolishing behaviour when an industry is closed.
* NoCAB now actually builds trees, although a bug causes NoCAB to plant entire rain forests around cities

That's it folks, enjoy the new release, I'm off on a sabbatical

Thank you very much! It actually works now! Now I can play with my favorite NoAI in nightlies :3 *goes of to play on his patched version of openttd*

A huge well done and congratulations is in order
Your regular uprates will be missed
We will grudgingly wait for your return
(naturally, the next release of AIAI will thrash it solidly)

I'm not sure, is this has been reported or not 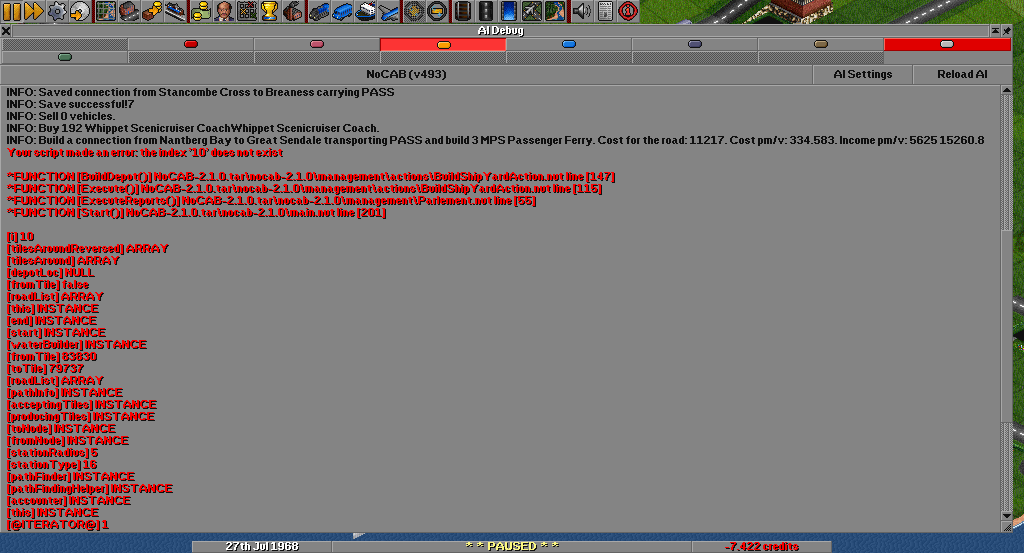 fanioz wrote:I'm not sure, is this has been reported or not

No it wasn't, thanks!

Fixed in the latest version, changelog:
- Fixed a bug in the routine for building depots for ship connections. In the case of a bidirectional connection if no suitable place could be found for the other depot the array with all possible connections would be over read resulting in a crash (thx fanioz!).
- More flexible when choosing spots in a town.
- Pathfinder for ships more greedy.
- Subsum returns reports now in the order of utility score (most important first!).

Im finding that when I play with no Cab, it only plays with like, thousands of buses or trucks (usually 30 per connection over very long distances) even though it has the option of using trains, planes, and ships

NekoMaster wrote:Im finding that when I play with no Cab, it only plays with like, thousands of buses or trucks (usually 30 per connection over very long distances) even though it has the option of using trains, planes, and ships

There is actually a couple reasons for that behaviour. First of all you need to know that NoCAB plans ahead and build up a database of possible connections. However, I only allow it to calculate connections it should be able to build given the maximum loan or bank balance (whichever is higher). In the beginning of the game this will mean that it will be limited to mainly airlines and trucks / buses. So when the loan is raised to a point that rail connections become available as well it is very possible that it already stored 100 connections using trucks / buses. If the rail connections it plans are better than the variant using trucks / buses it will be replaced so this should fix this issue. However, usually a that point it will be making so much money and the pathfinder for rail connections will simply not be able to prevent all of the 100 truck / bus connections to be build before it has a chance of updating them.

Secondly, which ties in with the issue above, the pathfinder for rails are slower due to their nature than the pathfinder for road vehicles and airoplanes. So NoCAB will be able to calculate more truck / bus routes than train routes and given that money at some point is no longer an issue it will build more of the former.

It is true that this behaviour should be changed and it is currently planned for the next release. The plan is to allow NoCAB to upgrade its connections, for example if we first have connection from a coal mine to a power plant using trucks to transport the coal, we might find that it is actually a better idea to replace this connection with one using a train and have it transport the cargo to a power station further away gaining more money that way. This should fix this issue you're describing. But at the moment there is little you can do to change this behaviour I'm afraid :/.

apologies about bumping this thread while you're on your holiday 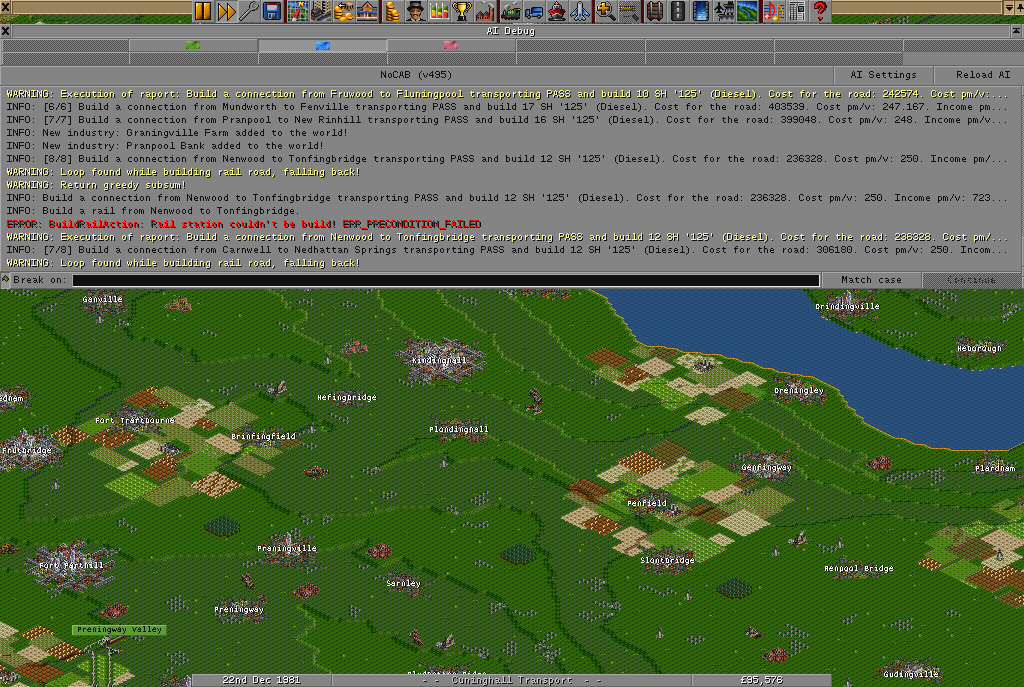 also, station placing of docks needs a bit of work:
the AI placed the dock just out of range of the factory, and it also took it years to get rid of the station: 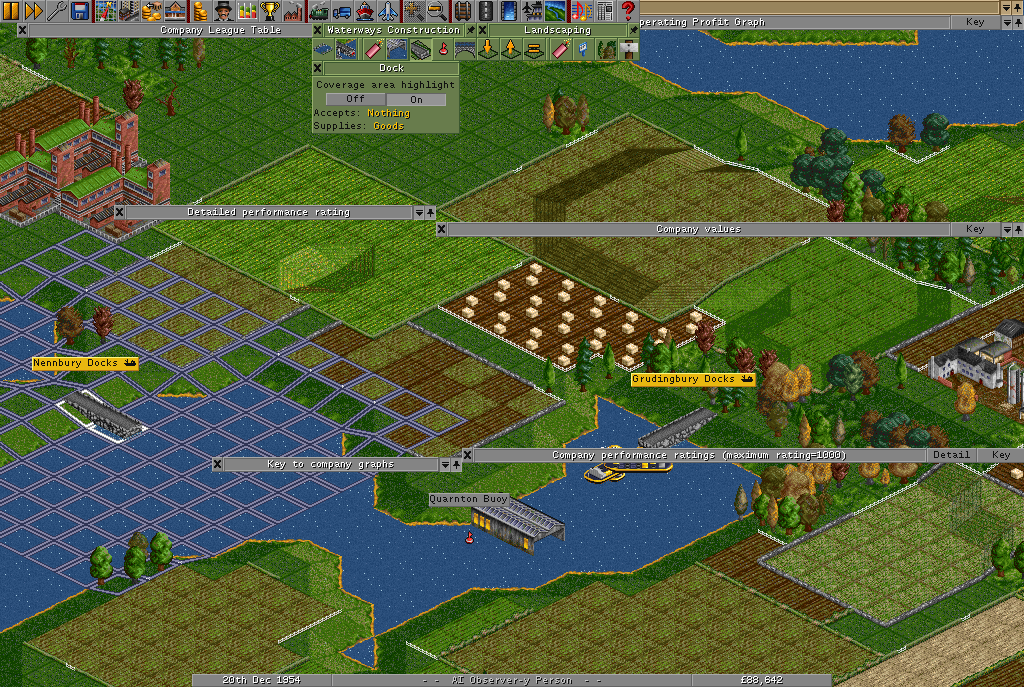 Lord Aro wrote:apologies about bumping this thread while you're on your holiday

see pic:
nocab bug.png
also, station placing of docks needs a bit of work:
the AI placed the dock just out of range of the factory, and it also took it years to get rid of the station:

Thanks for the report

. I'll have a look next month to see if I can fix this issues.
Top

New version 2.1.2 released. After reading the results of a small test by Samu I went on to discover why NoCAB did so bad. As it turned out there has been a change in the code of building NewGRF stations 4 months ago which broke that part of NoCAB, so it wasn't able to build train connections for that long!

Here is the fix! Enjoy 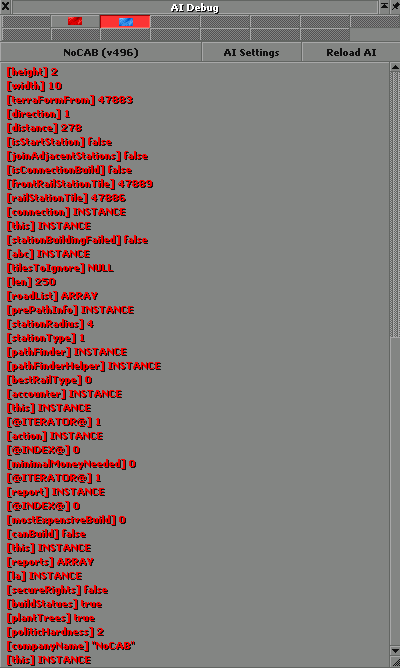 Some text
Some text

The forum hates me.

The ^ in the url makes it fail.

Thanks for the bug report, but it seems my fix only works for the nightlies. As AIIndustry::INDUSTRYTYPE_* in only included in there. I'm going to assume that 1.0.5 will include these change so when that version is released NoCAB should work as expected. The only way I can "fix" NoCAB for the current version is by disabling the NewGRF stations and then enable it when 1.0.5 comes around. So I keep NoCAB as it is and hopefully 1.0.5 will come around quick enough.

I assume you refer to AIIndustryType::INDUSTRYTYPE_*. Those are only part of the nightly API docs - not the 1.0.x API docs. Thus they are not available in the 1.0 API version. Sometimes if you develop on a nightly build you can by accident access 1.1/trunk API functions/features even if you have told OpenTTD that you want the 1.0 API.

Be sure to use the 1.0.x API docs http://noai.openttd.org/api/1.0.5/ to not accidentally use new features by mistake.
My OpenTTD contributions (AIs, Game Scripts, patches, OpenTTD Auto Updater, and some sprites)
Junctioneer (a traffic intersection simulator)
Top