Let us get to business!

Seen in these three pictures is a simple evolution of Orusto, which exploded pretty much when I got there but has been quite silent ever since.

In 1997, OT decided they should go for railway transporting. Up until then, they only had two train services. Orusto - Morana and Orusto - Chali. OT asked and got permission to build a 4-track station in Mitale, with some trains stopping also in the small village of Ellito. After several remakes of the plans of these two stations, they finally got working and in late 1999, they finally managed to finish it all. The first trains started arriving just after the new millenia began

Seen here is one of the (then) newly purchased C231 EMU units, built in a 2x7 design. 16 years later, this very train is still running between Larnieza and Trenvilla, via El Abeto (See first pic for reference)

We're suddenly in 2008. This AM10 EMU unit, 2x5, has been running the route Chali - Orusto since 1994. Now, 14 years later, she was finally moved from there to make room for the much faster Pendolino units. This sole AM10 of OT's network ran from Larnieza to El Abeto for three years before being replaced in 2011.

The entrance to El Abeto is an impressive build. Seen here is the previously mentioned AM10 making it's way from it's old route Orusto - Chali in order to get down to El Abeto. In order to get there, it will have to run in a circle, go under the bridge and then take a left (seen from this view, a right), down to El Abeto. The main line here are the two tracks to the left running from top to bottom in this picture. This is where the 4 Eurostar trains run, all the way from Orusto to El Abeto, stopping only at Mitale (See first pic for reference)

To finish off for now. El Abeto is the end of the high speed network constructed in 2002. Traffic here is much more regular than seen in this particular screenshot. In the top left, you can see one of the first Pendolino's OT bought (2006) heading for the sweet pictoresque town of Miarceto. As can be seen here, there are three different kinds of stops at this station. There's the North terminal, where trains going back north enter. South terminal obviously serves the same purpose, just for trains going back south. This is also the section with least traffic. The two middle platforms are used by one Eurostar running to Trenvilla and some Pendolino's shooting off to Miarceto or Fubores (via Elienera and Crejon. See first pic for reference)

In 2016, OT decided to rebuild El Abeto and it's entrance in order to get the commuter line (see pic 7) run on the left side all way instead of running on right and switching later on. This is the result:

I like the map, and although I don't use roofed stations much because they obscure my view of the trains, they do look cool. But how do towns of 1,000 support 14 car trains?? Oh, and all British folk will cringe at the livery you've given that AM10

Oh, and maybe turn off waypoint signage for screenshots? Looks a lot prettier that way I reckon. Can I get a look at Elorza?
“Blackmail is such an ugly word. I prefer extortion. The ‘x’ makes it sound cool.”
Top

Also, those 14 car trains were based on miscalculations due to Orusto's early quick growth which pretty much froze at 1.500. All lines built after 2000 are 5 tile stations, running mainly with 8 car Pendolino's!

Following picture shows the rather newly-built Elorza station, running straight below this town before shooting off again into the woods. It is currently served by trains running El Ovino - Fubores via Elienera, as well as trains running from Piunin down to El Abeto. The Pendolino seen here is heading to El Ovino via Piunin and it just left Platform 1. Also, the old C321 EMU (previously a 2x7 unit running Morana - Orusto (see first pic for reference)) has been moved here and rebuilt into a 2x4 configuration, allowing it to enter the smaller third platform of Elorza, which terminates and sends The C321 back to Piunin. This train shuttles between these two cities as Piunin is very much in need of the communications to get it's many workers to the local steel mill of Elorza:

Funky, that's one twisty route between El Ovino and Fubores, but would probably be great fun to travel on!

Good work, I just think you should start at an earlier date next time so that the towns have time to grow.
“Blackmail is such an ugly word. I prefer extortion. The ‘x’ makes it sound cool.”
Top

OT has recently extended their commuter service from Mitale to Denellero, via Becharra (a most interesting design here). They are currently expanding into driving freight trains, as they have reached the conclusion this is the one way to expand the most right now. See updated first pic for reference

The company of Trans Advance was founded by Mr. F. O'Donnel in 1945, and the headquarters were located to Nanwich, a rather large city with possibilities. The company built a two-platform station, keeping it simple and fairly efficient. At first, two 4-4-0 Express ran the route Nanwich - Meside with four passenger wagons, but after demand, the company replaced them with 4-6-0 'Standard Five' engines, as well as adding two more passenger wagons

The Accley station opened in 1948, served by two 4-6-0 Standard Five's and two 4-6-2 'Merchant Navy'. The Standard Five's run from Nanwich and Meside, passing all stations but Dundon. The 4-6-2's runs Dundon - Lewisside March, via Accley

The Dundon station, served by the aformentioned 4-6-2 trains, as well as two buses running to the local town of Godhattan. It simply looks rather nice, I believe:

It would be really nice if you could list the add-ons you used, i'm missing out i think. I still just use OTTD as it came 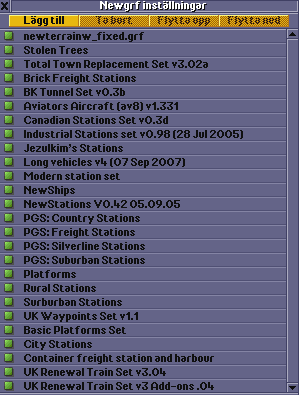 Hmm... Where abouts you get them .grfs lol?
I like the look of the station in your signature

Which .grf is that?
Top

Have a look around GRFCrawler. The station in Chrill's sig is from the Canadian stations set which is easy to find on this forum.
|||| My OTTD/TTDP pics ||||Currently slighty obsessed with getting Platinum Trophies||||Retired moderator||||
Top

Badger wrote:Have a look around GRFCrawler. The station in Chrill's sig is from the Canadian stations set which is easy to find on this forum.

Thanks! Found it within minutes

Thanks for pointing that out, Badger.

I am afraid I cannot provide you with new screenshots now, probably won't until Sunday (FYI, having a life can be a drag

Picture number one has got it's description in the picture itself, please read the text in the attachment:

This rather interesting design for a station is the result of a contest held in Tecombe Cross for their grand train station. As a country's first, the station hall is built mainly in pure glass, with a huge arch stretching across the platforms in the middle. This station has yet to start getting it's first trains, but will probably be served by either the new Diesel trains (EE10000) or by the Merchant Navy steamers. 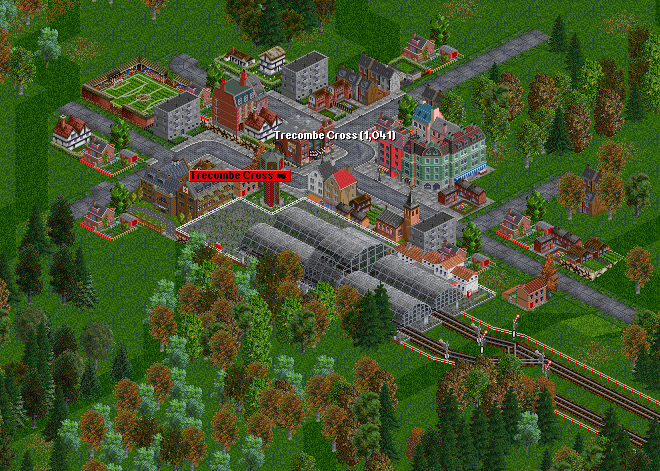 Keep it simple. This is the northern section of the entrance of Penbridge Skog. Yes, it is an utter mess. I know. No need to let me know this. At the moment of picture taking, only six trains actually ever pass this mess, by using simply one track in different directions (the one passing the transmitter on different sides). Do not call me crazy, eh?

So thats why I've not seen any of your screenies for a bit, you'd moved!

. Look forward to seeing more of these!
Posted by Raichase. Visit my Flickr! Gallery, Blog (get a feed of everyone at once at Planet TT-Forums).
Raichase - Perfect timing, all the time: [13:37] * Now talking in #tycoon

Trans Advance has recently started working on a new electrified railway, a more local service. This service, known as TACSI (Trans Advance Commuter Service Initiative) started off in Trecombe Cross running to Pleford but quickly got extended to villages and smaller towns like Dunsay and Muborough. It recently got a new line to Trethaven Common as well, with a direct route Trecombe Cross to Trethaven Common. This direct line is believed to shorten the travelling time between the two cities with over 300 percent!

The small, lovely village of Pleford. This was the first station of TACSI, and trains started arriving in 1954. They're hauled by a Metrovick EM2, the first electric train bought by Trans Advance!! 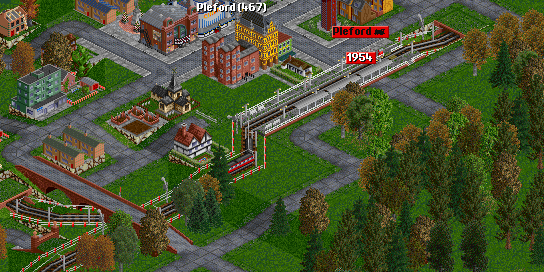 Trans Advance decided to extend TACSI to three new towns; Muborough, Nantshaw Ridge and Trethaven Common. After rigorious planning (after me finding a funny way to build the line), working got underway. Seen here is one of the most oddly designed junctions known to mankind. It is located south of Muborough

The newest addition to the TACSI is the extension to Trethaven Common. This is the end of the circle-formed railway that forms the TACSI network. This station has yet to see trains arriving 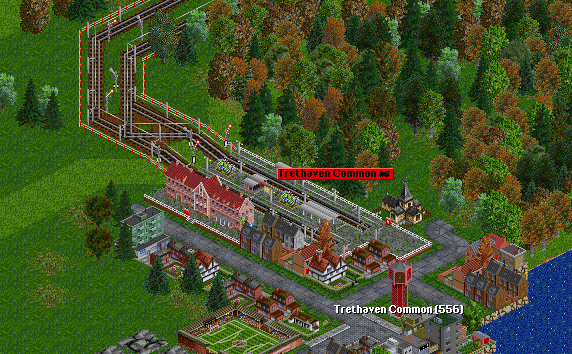 Nice but I see that you're another that puts signals on the wrong track. I will convert you all to convention!

I don't know why but I like that first shot of the single track station.