LaChupacabra wrote: ↑23 Oct 2021 13:30 Assumption: Comparison of the impact on the speed of 40 pieces of different enterprises, including Machine Shop from FIRS 3

I've started re-coding my Industry set. Reading some things other mentioned on last page and some problems I found with previous version I've decided to start again with it and add 1 Industry at a time and test it. Previous version had 1 Industry that was invisible on the map and at least 3 failed to load. So start again.

It will take me while doing it this way maybe a month or more as also working on my AuzTrainsNSW set as well.

Farms produce Grain Crops. They are purchased by the Grain Corps and get taken to Grain Silos by road where they are stored till needed. The grain once unloaded at Silos, it become Wheat, Barley, Oats and some grains and these get taken by train to Flour Mills, Brewery, Bulk terminal for export and Food Processing Plants. Some also taken to Oil Seed Processing Plant where they become Editable Oils and Liquid Glucose.

Farms to produce FRVG - Farm Produce (Fruits, vegetables, corn) these taken to Markets and Food Distribution centers where they become FRUT - (Fruit, Vegetable, corn) and taken to shops in the towns and cities and then they become FOOD to be delivered to the town. (A bit like home delivery)

Livestock .. still like to have Cattle, Sheep and Pigs separate or have large animals (Cows and Horses) and small animals (Sheep, Pigs, goats). Mainly so that the livestock wagons in my train set can be used properly. No good trying to put cattle or horses in sheep vans

Wool and Cotton used to be taken to a railway siding by road and loaded in to freight wagons and then taken by train to Wool Storage, Textile Mills and to Bulk Terminals for export. Not sure yet how I will code this.


Reading through a book I have of Freight Wagons of New South Wales, there are some wagons specially for Explosives (BOOM), Coiled Steel (METL),

Liquid Glucose (OLSD I think that be a good code for it), Editable Oils (EOIL), Limestone (LIME) plus a few others. I want to make those wagons for my AuzTrainSet so be nice if the Industry set had those cargoes to carry so the 2 sets will work in together.

I coded in a Ford and a Holden Vehicle Factory and some Car Sale Yards.

The Car Sale Yards also has a Produce Market where farmers bring their produce to sell to the middleman (wholesales) who then sells them to the shops. I plan to join other Industries like these where 2, 3 or even 4 industries will share the same area. This I hope will reduce the clatter and number of industries scattered on the maps.

Can we have those as objects too please?

Just the Vehicle factories or the lot?

In one big piece or in pieces?

Well, that depends a bit

If I may suggest:
Make the car factories (and cars) as single tiles.
Make the produce market as a multi tile object. Perhaps as an overlay too, as this would work well with OTIS.

Glad to see you've made it back home safely!

Pete.
There's nothing like a deadline to hone the concentration.

That the hardest part making the 6x6 templates for 4 views. I did a 1 view last night . See if can do more when get chance as busy with medical appointments today and tomorrow plan to spend the day train riding and photographing. See if can do some tonight, but most of it will be Thursday or later. Just wonder if I did 6x6 object templates .. who else can they be used?

Will see what single tiles I can make of them for those who want it to be smaller or like them bigger. The Holden Factory be the hardest because the way I have the air-conditioning units on the roof .. maybe I might re-do the air-cons with smaller ones and place them in middle of each tile. Shall ponder on the idea till I get home from town later this afternoon.

Credits:
The Air-conditions and the pipe on top of the roofs are from "luxtram" Roof Elements. He made them many moons ago and sent me the template.
The cars are NewCars from Industrial Stations Renewal (ISR) v1.0.2
Crates and fruit are from CHIPS Set.
Flowers I stole from FIRS 1.4.3 .. they was planted in front of a building.
Quast65 mowed those lawns for me.
The buildings are from work that fridaemon and I was doing with Warehouses and Distribution Centers, I just gave them a new paint job.

Reusing labels like that isn't a good idea because it will cause the cargo to be carried in the wrong type of wagon. For example OLSD is Oil Seeds which would usually be in an open or covered wagon, were Liquid Glucose should be in a tanker or silo wagon. It's better to make up a new cargolabel for these, as cargo classes will ensure it still works with other vehicle sets.

Anyway, I look forward to more progress on this set

I could say I going crazy, but maybe I already am. I have a medical appointment for 20th at 11:15. I for some strange reason thought that was today, but been told the 20th is tomorrow after I arrived at doctors surgery.

Can I blame my mistakes on the Covid-19 immunizations?


Emperor Jake wrote: ↑19 Apr 2022 00:10 Reusing labels like that isn't a good idea because it will cause the cargo to be carried in the wrong type of wagon. For example OLSD is Oil Seeds which would usually be in an open or covered wagon, were Liquid Glucose should be in a tanker or silo wagon. It's better to make up a new cargo label for these, as cargo classes will ensure it still works with other vehicle sets.

Thanks for your reply.

I need my eyes tested

I looked through the list of cargo codes used by other Industry sets to find one for liquids and I got no idea how I ended up with OLSD.

Can see it as clear as day .. so maybe it was night time I looked at the list of codes

Did some more research and this cargo probably could be removed .. as again I boo booed .. I thought a special wagon was made for it (Some how mistook a Limestone tank wagons for a glucose wagon).

The first wagons to carry the liquid glucose seems to have been converted BMT milk wagons in 1943 for Dairy Farmers and from 1968 used converted flat wagons and labeled LGF with 2 tanks on the wagon for Fielders Ltd. So maybe the wagons I already have will be sufficient.

So maybe EOIL could be used for both Edible Oil and Liquid Glucose. They both made from grains and both used in food processing and purchase in shops for cooking. So the cargo chain be something like this .. Grains from farms to the Oil Seed Refinery and converted to Edible Oil. From here take to either Food Processing Plants, Food Distribution Center and to shops.

Liquid Glucose can also be made from sugar so it will give the Sugar Refinery another cargo, just add some water which I do have Water as a cargo .. mainly for those who play in the desert, but this will give water a destination in all climates.

I appreciate the reply's from you, Quast65 and Captain Rand as helps with planning it all.

So back to researching some more.

If I make these as single tile objects .. Maybe I could then do same to these like we did to the service stations .. keep the same buildings and shapes and use different colour scheme and emblem to represent different vehicle factory companies. maybe could do the colour scheme for the company of your red car your hugging

I mentioned before I like to make Industrial Estates where several industrys are joined as one.

Hope to do more Industries Estates joined together.

Shall see what I can do.

I started on the Vehicle Factories as objects .. I'll continue the story over on my Object forum.
viewtopic.php?t=75657 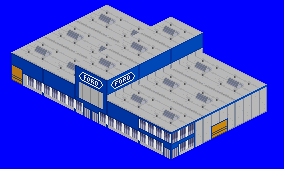 Made a few changes to the Vehicle Factories.

The Ford Factory. I made the buildings a bit taller so same height as the Holden buildings .. the reason for this is the object vehicle factory ones I planning to make thanks to Quast65 idea

They can all be same height so they can interact with each other.

The Holden Factory changed the air conditioning units on the roof so they in middle of each tile rather then overlap like in previous ones I did.

MicahMouse wrote: ↑27 Sep 2022 12:42 Hello, I would like to report a bug
I can't found the grain silo or grain bulk storage for some reason

I found several bugs .. Oyster farms building on land, one of the factories is invisible, and reports some not distributing cargoes.

Almost all sets I tried to do seem to have a bug in them so basically I given up trying to make Industry sets for now. Might one day try again.

Been fiddling with the Industry sets past few days .. gave up trying to find some of the bugs so instead I started rebuilding the set one industry at a time to see if can find the problem that way.

Still planning on a Industry based on different farms. But this site brought back an old idea has I had many many years ago.
Request: make TTD a little harder and a little more realistic!
viewtopic.php?t=90345
Have a read of what I said there and tell me should I also add Council Depot, Per-Way Siding and Railway Depots as Industries to give more places to deliver Coal, gravel, Sand, Petrol and other cargoes.

GarryG wrote: ↑03 Nov 2022 22:50 Been fiddling with the Industry sets past few days .. gave up trying to find some of the bugs so instead I started rebuilding the set one industry at a time to see if can find the problem that way.

Still planning on a Industry based on different farms. But this site brought back an old idea has I had many many years ago.
Request: make TTD a little harder and a little more realistic!
viewtopic.php?t=90345
Have a read of what I said there and tell me should I also add Council Depot, Per-Way Siding and Railway Depots as Industries to give more places to deliver Coal, gravel, Sand, Petrol and other cargoes.

I plan to working on the Industry set a little each day and also spend some time on the AuzSportObjects.

These sound like good ideas! I don't remember if you have convenience stores, malls and newsstands or not, they can be used as more places to distribute food (as I found out some cities once they are big enough don't seem to accept food anymore).
Top
Post Reply
943 posts