I didn't post the pros and cons of split grfs previously, I wanted to get some initial ideas without influencing them. Thanks to those who posted.

So the pros and con of split grfs.

Pros
- faster compile time (big benefit to me when developing)
- faster uploads to bananas and Amazon S3 (docs)
- faster downloads for players
- more efficient on bananas bandwidth, saving OpenTTD costs
- players can activate more than one roster in a game
- potential to have grf parameters that are specific to 1 roster if needed (not possible with single grf)
- docs might be simpler, publish a different grf.farm url for each grf, instead of trying to put content for all 3 rosters on a single url

Cons
- confusing names, there will multiple grfs named "Iron Horse - XYZ", also with different version numbers
- confusing split changelog, or having to maintain 3 separate changelogs
- rosters are not and will not be designed to work together
- lots of magical features like passenger car sprite choices etc won't work reliably cross-roster, but may partially work in a slightly-broken accidental way that will be confusing
- no cross-roster balancing of costs, speeds, intro dates or other stats
- potentially confusing or conflicting railtypes across different rosters
- compile needs refactored to generate 3 separate grfs
- there will be huge overlap of freight wagon types and sprites, particularly for UK / Euro rosters

Names are the biggest question.

This will require renaming existing "Iron Horse" which will inevitably confuse some players.

It also gives no obvious clue as to the differences. Unlike, for example "NARS" and "UKRS"

But I don't want to put specific country names into the names.

I would have preferred one NewGRF where you could enable one/other/both, but reading your cons that seems like a near impossible, demoralizing task.

Countries and regions do change, but not often.

Keep it simple. It's fun being cute with names but sometimes being descriptive is much better in the long run.
Do you like drones, quadcopters & flying toys? Check out Drone Strike Force!

Id prefer to have 2/3 separate GRFs that are 100% compatible and not demanding on each other. When it comes to wagons not specific to certain train, it might be good to keep those separated as well. Yes its more work, but than again, you dont have to make wagons for specific region, and both american and european wagons are similar, technically speaking there might not really be any difference between them in terms of sprites. At least not all of them...
In 1989 at the Russian-Chinese border, 3 Chinese tanks attacked a Russian, calmly plowing tractor. After 2 hours of fighting, Kirovec continued on plowing the field.
Top

Not sure if the right place to post bugs, or whether there's a bug reporter I should use. If this is the wrong place, sorry about that.

Currently playing with Iron Horse 2.49.1. Just build some flatbed cargo wagon randomised, the first 45mph version. Refit to wood. The straps holding the wood down are not CC, they are blue. Could be intended I guess but they look odd?

Also how do you make the image clickable to open rather than embedded image. Tried but couldn't seem to get it to work, so apologies for the huge image being posted! 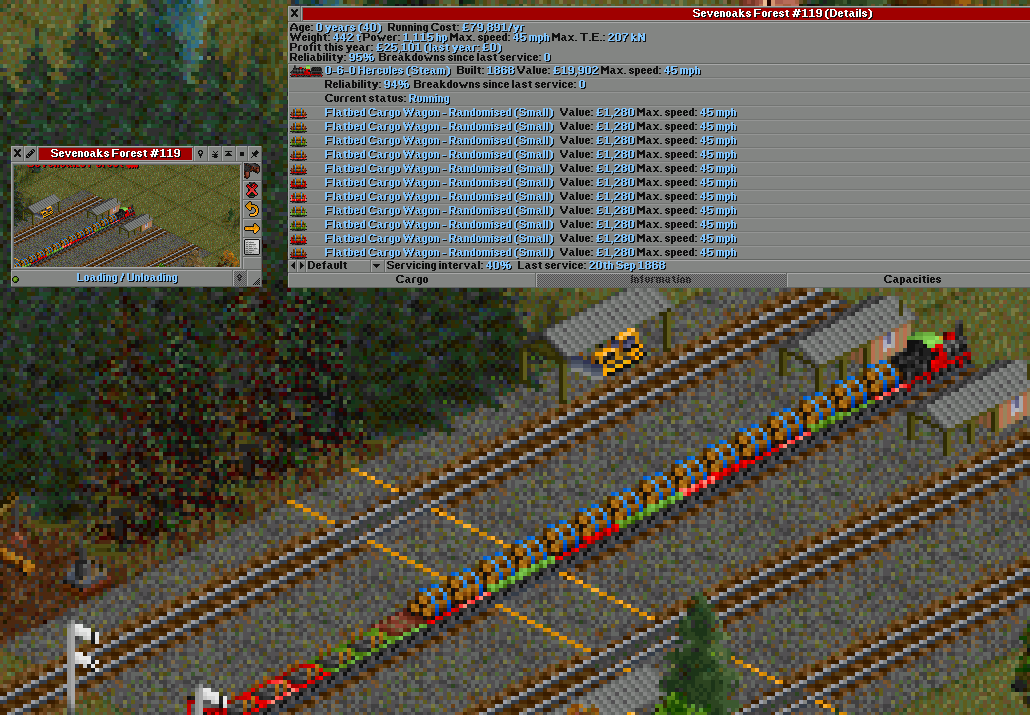 paulicus25 wrote: ↑21 Jul 2022 18:13 Currently playing with Iron Horse 2.49.1. Just build some flatbed cargo wagon randomised, the first 45mph version. Refit to wood. The straps holding the wood down are not CC, they are blue. Could be intended I guess but they look odd?

But in Horse, they're not CC because CC can merge with the CC wagon body (the same wood sprites are used on e.g. open wagons). So the blue creates some contrast.

Not savegame compatible with Iron Horse releases before 2.50.0.

Wagons-only mode is quite untested, but seems to basically work.
Brake vans might show incorrect sprites for game year when used with engines from other grfs.
Mode is activated using last parameter in list. 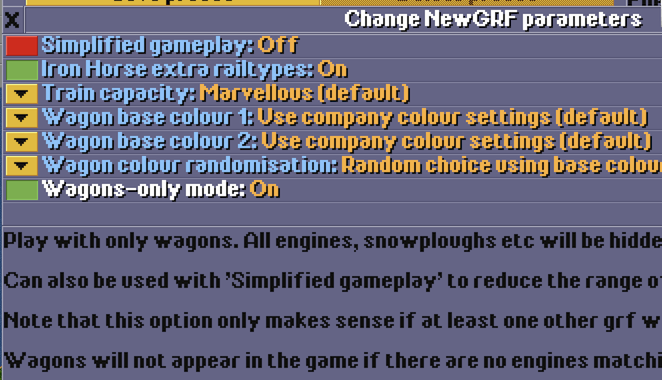 andythenorth wrote: ↑13 Sep 2022 19:40 Brake vans might show incorrect sprites for game year when used with engines from other grfs.

Would this not be the case if the whole roster was used too?
Top

andythenorth wrote: ↑13 Sep 2022 19:40 Brake vans might show incorrect sprites for game year when used with engines from other grfs.

Would this not be the case if the whole roster was used too?

Yes, the same issue applies, and it could be addressed in the grf.

Nice recent additions (I lost track of all of them)!

I noticed a weird thing:
Early Jokers (Grub, Lamia) seem quite expensive compared to, say, the Buffalo, which is more powerful and cheaper to operate.
I like the fact that the Jokers/Shunters have similar properties, and instead tend to get cheaper over time, but in general I find them a bit expensive, especially the early ones.
Question: Is this intended? Could they be a bit cheaper?

Some screenshots of mine...
Top

arikover wrote: ↑19 Sep 2022 21:54 Early Jokers (Grub, Lamia) seem quite expensive compared to, say, the Buffalo, which is more powerful and cheaper to operate.

Confirmed - will be fixed in next release