Sorry I not have any 2cc steam locos.

Not sure if these sets would have any
Australian Standard Gauge v0.1.1
Generic Australian Set (GARS)

Like Garry said, Auztrains hasn't got any 2cc stuff. I actually asked about a 2cc version of Auztrains a long time ago, and then that lead me to make my own stuff. If you want to give it a go yourself, I've got a few Auztrains sprites in 2cc, and a few 2cc sprites for my own set, no steam locomotives though. I'd be glad to help make some more (and I'd assume Garry would be willing to lend a hand with coding

However, If you're after pre-existing Australian trains in 2cc, Project Generic Trains is my own set and it's mostly fictionalised versions of trains from Australia, although I haven't drawn any steam locomotives yet. The C38 class is on my todo list in future though.

Let's hope you get back sooner rather than later. The railways IRL are having a few issues, so they'll probably need your help

Im having trouble with the auztrains grf, there are many multiple units but nothing to put between them. am i missing something or what?
Top

cheekibird wrote: ↑23 Jan 2022 05:06 Im having trouble with the auztrains grf, there are many multiple units but nothing to put between them. am i missing something or what?

These are OSF wagons stacked 2 high. Australia started in 1996 operating double stack across the Nullarbor Plain. So thought I could add some to my sets.

These are Australian designed .. they are 2 high for overhead wires, tunnels, low bridges and girder bridges. You need to route your railway line that is to carry these trains so it does not included those things. Overhead bridges need to be at least 2 levels high.

Thanks .. the graffiti artists haven't attached them yet.

Looking at making the sunken wagon double stacks as well. But the problem is I had to reduce the lengths of the containers to fit in the wells which is a shame at takes away the perspective if these wagons are attached to the other type container wagons.

Will need to put my thinking cap on to decide if still make these sets or leave them out of the game.

* Grain train using Red Containers using OCY and OSF wagons .. these red containers are used in NSW, Auztralia to load wheat and other grains in.

Both above designed when running empty will have some empty containers in the load.

Glad you like it .. was hoping to upload a test game file by the weekend but taking longer then I thought.

I working on purchase costs .. don't want them to expensive when the vehicle first becomes available to purchase.

I been playing and mucking around with this game since it need the old faithful DOS operating System. And today first time I realized that purchase costs increase every month from 1920. It increases at a approximately 2% a year. For instance the settings I have at moment for the 44 class diesel if you purchased in when it first available in 1958 it cost $118,886 but if you decide to purchase more say in 1982 it will cost you $183,476.

Change-Log:
* AuzTrainsNSW_overhaul and AuzTrainsNSW been amalgamated into one set and called AuzTrainsNSW (at moment it is version 33).
* AuzTrainsNSW
* now includes EMU and DMU complete sets. Not able to add center carriages as they are already included in the sets.
* There are train sets already made up or you can make you own sets. For instance a 7 Car HUB set .. you can add carriages to either end but not in the middle.
* Invisible MHO Brake-Van .. the idea of this is it can be placed at read of the HUB sets as the front and rear carriages of a HUB set is part passenger carriage and part Mail section but you can not tell this carriage to
carry both passengers and Mail, so the MHO can carry the mail that would normally be in those end carriages.
* There are some Double Stack container freight wagons. Double Stack started in Western Australia in 1996 and went as far as Broken Hill. Now they extend to Parkes and when the inland railw line is completed almost all States and Capital Sydney (except Sydney and Canberra) will have access to double stack wagons. These wagons not intended to travel through tunnels, under the electrical wire, under low bridges or travel over girder bridges. You need to make a route so can avoid all those obstacles.
* New South Wales in Australia has started carting containers full of grain. So I added some red containers to carry grain.
* Been fiddling with purchase costs I think I have these set ok.

* Invisible engines so can place rolling stock in sidings and leave them there. ( I did make one but I lost where I put it .. can not see it anywhere

If you like to test what been done so far I've included the game file. Please feel free to comment and have any suggestions to add to this set.

In next upload of game file the following loco classes have extra colour schemes now. 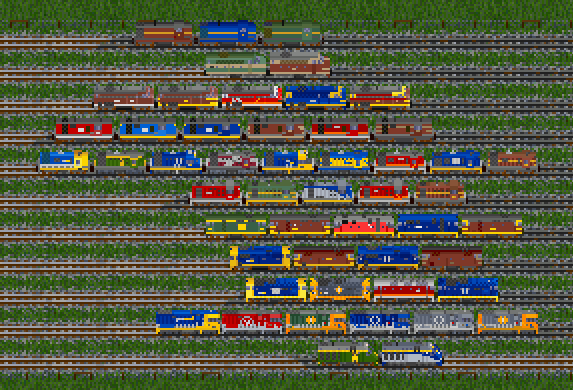 The purchase menu is getting very clattered with so many different types of coaches and colour schemes. So I looking at another idea with them and arrange so they can be refitted.

When you purchase the HFH, click on the refit menu 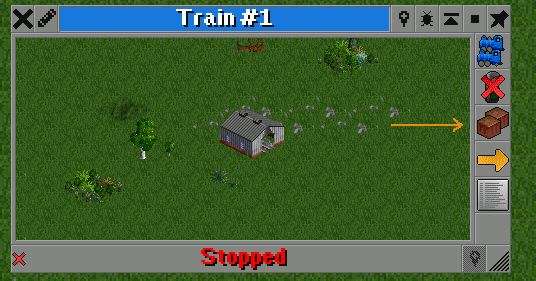 When Refit menu opens click on the coach concerned and then you can change it to what colour suits you. 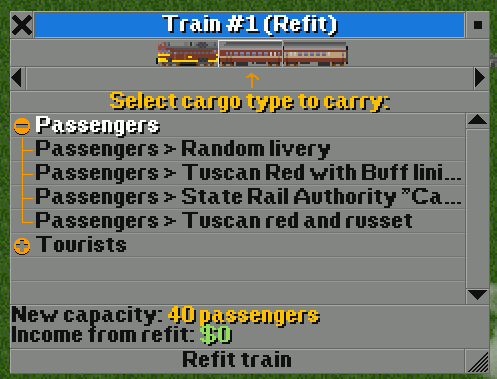 I'll do a few more tonight and Friday and see if I can upload the test game file in time for the weekend.

Been working on refitting of individual coaches. when you click on the coach you want it will randomly select one of the colour schemes for that particular coach. See information in previous posts.

So now I have some diesels and coaches with the refitting available. Hope you like this idea .. comments appreciated.

Ragin1_ and I looking at idea to separate the Auz Trains Other States set into individual States.

But come across a problem. Their are a lot of private companies now that operate in almost all the States. Should they be included in every State or do we make a separate set for them. Place all the NR, AN, SSR, Silverton and some others all together in the one set.

Also Passenger train sets that operated in more then one State. Do these get place in each State they visited or could they be a small stand alone file. Some of the trains are Indian Pacific, Southern Aurora, Spirit of Progress, XPT (operates between Sydney and Melbourne and also Sydney and Brisbane), The Overlander, The Ghan, and The Transcontinental. (Some of those still to be made).

In the mean time would you like to test the game file. If you have a game in progress using the previous test version, the trains might crash.

Hope to hear from you soon.

I finally made a scenario with AuzTrains

I'll be uploading to the forums and Bananas shortly.

Looking forward to see what you done.

When I stopgetting side tracked on other projects I hope to get back to doing more to this set.

GarryG wrote: ↑26 Feb 2022 10:05 I been playing and mucking around with this game since it need the old faithful DOS operating System. And today first time I realized that purchase costs increase every month from 1920. It increases at a approximately 2% a year. For instance the settings I have at moment for the 44 class diesel if you purchased in when it first available in 1958 it cost $118,886 but if you decide to purchase more say in 1982 it will cost you $183,476.

That sounds like inflation? It's a setting and you can turn it off. Apparently it's broken so I play with it off.
Top
Post Reply
497 posts