I'd like to introduce to you a new* script to control towns development: Renewed World Disorder.
I would like to thank Firrel in advance without which this script would not have been completed, and also milek7, who helped create a special version for the server. 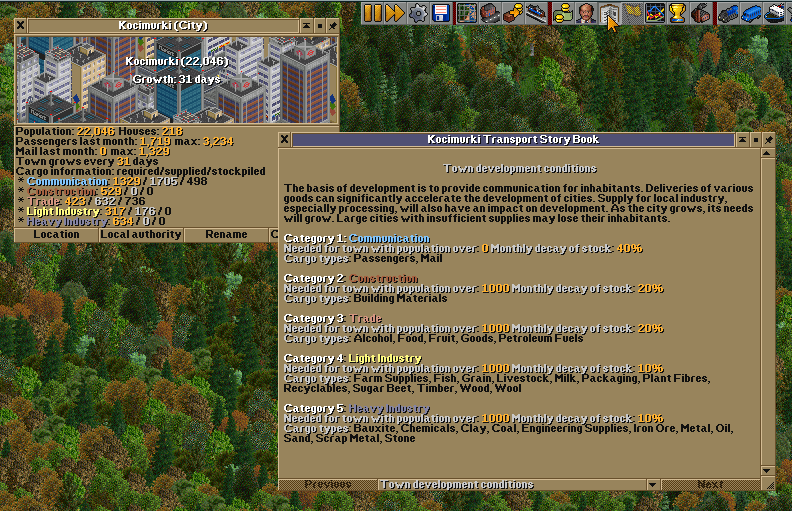 WTF?
Renewed World Disorder script is a mashup of scripts Renewed City Growth created by keoz and New World Disorder created by milek7 and me. The script works very similar to the one known RCG (so partly also RVG). The conditions of development have been changed, in particular the categories of cargoes goes to be similar to the NWD idea. Here, the development of cities, even the smaller ones, is based on five pillars. The most important is communication, which is necessary for the city's development. Construction and trade will also be of particular importance. Providing cities with goods from these categories can significantly accelerate development. Light industry (i.e. mainly agriculture) and heavy industry (i.e. the production of metals, fuels, building materials, etc.) will have also an impact on development.

With what to eat this?
The script will work properly since at least version 1.8.0. It supports most of the available industries sets (FIRS 1, FIRS 3, ECS, SPI 1.32, AuzInd2, NAIS, FERNZ, YETI). In practice, it can be used with any other set from the outside off the list, but some of the cargos may not be visible and taked into account by the script or may not be assigned to the correct category. For simpler industries, the number of categories will be limited to 3 or 4. You can also limit this number yourself in the script settings.I added the option to play with the OpenGFX + Industries / Manpower sets, but it doesn't work perfectly. In their cases, the script will always show a warning about an incorrect cargoes list. However, the script will work fully properly. This is due to the huge number of settings variants (there are thousands of them). It can be probably done better, but I don't know how. Still, I decided that it is better to have such a somewhat flawed option than not to have it at all.

Could it explode?
No. Rather not... Anyway, I didn't notice any problems. The script is based on a proven RCG where most of the major errors have already been eliminated. New problems that appeared in RCG from the game version 1.8.0 was eliminate by Firrel. If you change something in the script settings in the expert part, there may or may not be some irregularities. I left them although I am not convinced of their usefulness myself, but maybe in some situations they will be useful for you.

How it work? Est-ce que tu parles français? Sprichst du Deutsch? а ты говоришь по русски? 한국어하세요 ...
The script contains several language versions. Currently they are: Croatian, Czech, Danish, Dutch, French, German, Polish, Slovak and Spanish. They were made using the google translator, so almost certainly they have some errors. If you notice these errors or want to add another translation, I will gladly accept your help. I think is always better to play in your native language.

Below is a simple template to translate, but I would prefer a ready language.txt file, which is also in this file.

We play with FIRS extreme and it did make a strange thing when we provided subsidies to a city.
String showing growth changed up to City grows every 0 days and town became a super-city. After some time growth returned to 'normal'.
I wasn't able to reproduce it on a new map and subsidies. Maybe I haven't been that fast with providing passengers. Yet it was still noticeable that grow rate is increasing rapidly.

Is there a hard limit on the city grow in your code?
Top

neobit wrote: ↑16 Nov 2020 12:18 We play with FIRS extreme and it did make a strange thing when we provided subsidies to a city.
String showing growth changed up to City grows every 0 days and town became a super-city. After some time growth returned to 'normal'.
I wasn't able to reproduce it on a new map and subsidies. Maybe I haven't been that fast with providing passengers. Yet it was still noticeable that grow rate is increasing rapidly.

Hi,
I admit that during the tests I also managed to notice this strange behavior with an increase every 0 days. It returned to normal fairly quickly and did not cause any other adverse effects, and what's more, I could not repeat it, so I decided that it would not be a problem to use the script. Unfortunately, I am not a programmer and I cannot find the cause of this behavior. In terms of code, this script is just a minor modification of another Renewed City Growth script additionaly improved by Firrel (the original script doesn't work properly since the game version 1.8.0).

There is no growth limit - cities can grow endlessly, although it is much harder to develop really big cities (over 300,000 inhabitants) than with regular game mechanics. From what I noticed, large cities, despite the provision of all conditions, develop slower than in the standard game. If you want, you can always change the pace of city development in the script settings, also during the game (maybe not on the server).
I am sorry for may English. I know is bed.
Top

Sorry for the omission, this is a game from the JGR patchpack
Top

Problem solved, too much cities.

Yes, too many cities can be a problem. It is about the amount of information to be processed by the script, which becomes too large with time (I repeat what I read - I'm not a programmer).

Here is a description of a similar situation and the post below is an explanation. Firrel did have a solution to this situation, but it is a compromise that will not be good for the average game.
The best and easiest thing to do to prevent this from happening is to limit the number of cities before generating the map so that there aren't thousands of cities. The more that such amounts are probably not that much needed to play.

When generating large maps 1024x1024 and larger, it is a good idea to use a custom setting for the number of cities to establish a reasonable number of them. 200? 300? I think this is enough for the script to handle.
I am sorry for may English. I know is bed.
Top

You are planning XIS xupport?
Top

Yes, but I don't know when I'll finally do it.