Kalen wrote:Empty graphics for full wagons sounds like a recipe for confusion

Re-thinking this idea .. I won't make wagons to stay empty even when loaded as mentioned by you and others will be confusing to some.

If that's what I'm thinking it is, then it sounds like a good compromise, yes!

On that note, consider: eyecandy wagons.

Kalen wrote:If that's what I'm thinking it is, then it sounds like a good compromise, yes! On that note, consider: eyecandy wagons.

If I'm thinking what your thinking of what I'm thinking .. I think that be the answer to having some empties on a full train .. I intend to make them free to purchase and operate as they just there for the novelty. Maybe do some wagons with a blinky bill on the ends and some without.

See if I can make some up today and see if idea looks good.

I converted some container wagons to empty Service Vans.

There is 2 types .. one just empty wagons and the other has flashing lights on the end to what you would see in many trains these days that no longer have Brake Vans at the rear.

They become available in 1970. On NSW, Australia it was in the 1980s brake vans were removed. Not sure other countries hence why I chose 1970.

In the pics .. the last 3 wagons will remain empty .. the last one has the blink bills (flashing lights) .. they can be placed anywhere on your trains .. they are free to buy and have no operating costs. They just for the novelty. 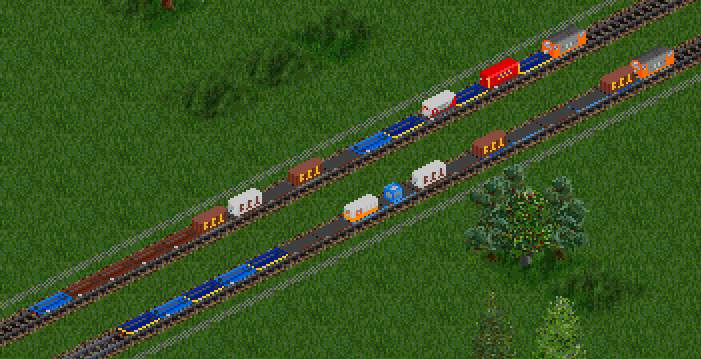 These can be found in this newgrf if like to try.

The little flashing lights are so cute and I think this was a great idea! Making them non-functional eyecandy wagons means they have that role specifically now, players will purchase them intentionally with that in mind, and regular wagons won't catch anyone by surprise, no longer leading to confusion.

Oh, by the way, question: is there any particular reason why the XPT Power Cars are reversed in the purchase list?

Your trains look superb, by the way!

Kalen wrote:The little flashing lights are so cute and I think this was a great idea! Making them non-functional eyecandy wagons means they have that role specifically now, players will purchase them intentionally with that in mind, and regular wagons won't catch anyone by surprise, no longer leading to confusion.


Kalen wrote:Oh, by the way, question: is there any particular reason why the XPT Power Cars are reversed in the purchase list?

I just got the purchase icon bak to front .. can fix.

Some diesels in purchase window show 1 1/2 engines I intend to make these so when you double head them the second engine will face opposite direction .. still working on them.

Thanks muchly .. majority of the graphics to freight wagons belong to Coalroads Artist. And those I made myself still used his ideas.

Sorry forgot to answer this before .. I won't be doing eyecandy to vehicles that I know what their colour was in real life. There are a few wagons and locomotives that I got from other sources that are in eyecandy at the moment .. eventually hope to make these real life colour in the future.

Not many freight wagon left to modify.

The following Freight Wagons still need some graphic works done to them.

New Service Vans - These are Empty wagons for those who like some novelty of some empty wagons on a loaded train. (Still a few to do)

All Livestock Wagons separated into Cattle Wagons and Sheep Vans for the fun of the game and make full use of the graphics of those wagons.

Sheep Vans (for sheep and pigs) 4-wheelers carry 100 sheep and bogie wagons carry 200 sheep. (Not sure yet how this will affect game play and whether I need to increase running cost of these vans).

(In case city people don't know, cattle are a lot larger then sheep so .. DON'T BE CRUEL AND FORCING CATTLE IN TO THE SMALL LOW ROOFS COMPARTMENTS OF SHEEP VANS AND TRYING TO FIT 200 OF THEM IN THOSE SPACES).

When Bogie Hopper and Silo Wagons become available for Coal, Ore, Grains and other minerals .. open wagons will no longer carry these commodities.

If you want to update the train sets you been using here the latest Version 17 of both train sets.

Hope to get all the fright wagons finished in next day or two so can update Bananas.

After that intend to make a few more Freight Wagons, modify some Passenger carriages and locomotives.

Finished fixing and changing graphics to all the freight wagons.

Will be more I intend to add later ..

Here is version 18 and also the source .. will put them on Bananas shortly.

Read the last few entries above see what I changed and added.

I have a break for a day or two and play with what I done then start checking locos and pass carriages.

A few days vacation is always good for inspiration!

Every time I try have a vacation I get more ideas and soon find myself back into adding more to my projects .

Waaaa .. I forgot to remove the Piggy Back wagons from the train sets .. still got the sample .. when run train empty has the trucks, but when full wagons are empty.

I intend to make a full set of these .. but redoing the trucks so a bit smaller going to take some time .. I intend to try do this after I finish checking passenger coaches and locos.

I'd just make notes, and otherwise concentrate on what does work

I noticed in the 2cc Train Set that they have a better drawn Electric and Diesel QR Tilt Train. I was thinking that perhaps my Sprites should be replaced with those. I like having my sprites used but if theres something much better out there, its probably for the best to go that way. Though I dunno if 2cc Trains Tilt train sprites are the same size as my Tilt train sprites.

My hard drive on computer has crashed. Hope it just operating system and I haven,t lost any work. I have to buy new drive and reload a lot of stuff. Then hope drive that has crashed will work as a slave. I using tablet at moment but it to small for me to use to code and do sprite work.

Nekomaster will check out the tilt train when I back in business.

I use the Universal USB installer to make a Bootable USB flash drive for Linux installs : https://www.pendrivelinux.com/universal ... -as-1-2-3/

For ubuntu or other linux distros with Live CD versions (most major distrobutions have a Live CD option so you can run the OS off your Flash drive) you will need at least a 2GB flash drive as some distros are over 1GB in size these days.

EDIT : Live CD's allow you to boot Linux without having to install anything, as it will run from the drive/ram, and they all come with the essential tools like a File Manager/Explorer to explore your hard drive.

EDIT EDIT : Perhaps you could send me a PM with details of whats going on with your computer that crashed, perhaps I can help you fix it without costing you anything.

I always buy 2 disks. I work on 1 disk, and make regular copies to the other disk. As it is unlikely both disks crash at the same time, data is quite safe (until someone takes your computer, that is

)
Being a retired OpenTTD developer does not mean I know what I am doing.
Top

Alberth wrote:I always buy 2 disks. I work on 1 disk, and make regular copies to the other disk. As it is unlikely both disks crash at the same time, data is quite safe (until someone takes your computer, that is )

I do have 2 hard drives in puttie and have space on both for my work and not as often as I should I do make copies of my work on both drives .. but just hadn't did copies for awhile .. 2 months

Hope all goes well , been there done it ,lost a few months of work ,now have 4TB back up drives , also let the Mac do its Timemachine backup .Not backed up the PC for a while , not used as much as the Mac ,will do a overnight back up . I have found a few more fat finger wonky spellings on the Auz ind set , does not affect play ,just amusing . As said keep up the good work and hope the sick PC gets well soon .
Top
Post Reply
410 posts