Snail wrote:I don't know how convenient it would be to keep the three versions in one GRF file, to be chosen through a parameter.
The tropic one would be a totally different set, with just some freight wagons as overlap. The Alpine one would be a subset of the existing one, with a more limited choice of liveries for the available vehicles.
I still haven't explored to what extent adding a parameter would complicate the code. Honestly my priority now is to get at least the temperate version done (and my TTD time is sonewhat limited...)

Then just set climate availability to 'all' for all vehicles...

Having done a parametrized version of a train grf wrt climate availability, it's simple to do, though. If done right.

Snail wrote:Honestly my priority now is to get at least the temperate version done

Don´t waste your time with rivet counting or French NG set variations. Better move on to the French SG set, to the Italian set, to the Alpine Set, ...

Sorry, had no time to test the Set until now!

Nice Set!
I am having much fun since yesterday starting a new Game

First thing i recognized: the front of A150D2 seems to jump back when driving curves, see pic attached.

Now i must play again 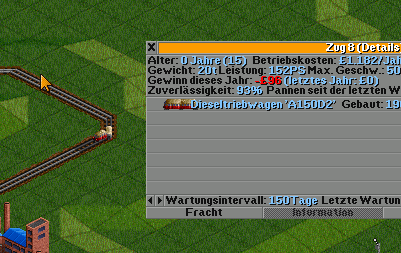 Snail wrote:The idea would be to make a tropic version with Algerian trains, and possibly an Arctic version with only the trains used on the Alps. But no promise about when they'd get released (especially the tropic version, which would basically be just as different as a brand new set)

). As you mentioned yourself, it would be quite a different Set, with completely different rolling stock (or at least liveries).

I would also really like the French Trains to be available in all climates (without restriction), even if it is not really accurate. My arguments : I rest my case.

But if you decide otherwise, I will respect your choice, of course.
Some screenshots of mine...
Top

the grf turns of if you try to play on artic.
is this a bug?
Top

cachila wrote:the grf turns of if you try to play on artic.
is this a bug?

No, it's not a bug. As it's being discussed, the playtesting version of this trainset is only available for the Temperate climate.
Arikover: it's true that in France it snows almost everywhere in the winter, but would that mean that trains usually seen around the Côte d'Azur, Brittany or Corsica would match with an "arctic" climate? To me, trains seen on mountainous regions where one expects to find lots of snow and rigid temperatures would be more appropriate.
That said, I could agree with your point of being able to use the "canary" in an arctic climate.
So the final version will also work in the Arctic climate, with the exclusion of those engines/liveries that were never used in mountainous regions (perhaps not just the alpine region: even the Vivarais could be ok).

As for tropic, well, that climate is not really found anywhere in Metropolitan France (or Western Europe for that matter). This is why I thought that only a former colony, which always heavily used French-built rolling stock, would be more appropriate. But it would take a long time to draw. Since it looks like there's demand for this, a solution would be to temporarily switch the French trains on in Tropic, until the proper rolling stock is drawn.

BTW a few more vehicles done so far, "only" 14 IDs left to go...
The French Narrow Gauge Train Set is now released! Get it here
Top

Yay! Can't wait to see them!

Concerning the climate availability, my 'arguments' were mostly jokes. I know that France has mostly a temperate climate. I just wanted to operate some French trains in an imaginary tropical world, for example. As I play mostly in random-generated maps, I just imagine that the game world is imaginary. How else could it be possible for french narrow gauge trains to stand alongside dutch trains? (that's right, I mix French Narrow Gauge Trains with the Dutch Train Set, one of the few sets which proposes early SG trains).

That having been said, if you choose the temperate climate, I think you shouldn't bother to make just a part of the trains available for other climates. Stop listening to me whining, and go on! This Set is really impressive as it is. Keep going!!!
Some screenshots of mine...
Top

BeSt-Com wrote: First thing i recognized: the front of A150D2 seems to jump back when driving curves, see pic attached.

You're right, the offsets of that railcar when driving in reverse were a bit off. Fixed now:

Added three vehicles from Brissonneau-Lotz: a railcar used on various parts of the country (drawn here in three different liveries), the double railcar used on the Côte-d'Azur, and the small diesel-powered van also used on that line.
All these vehicles share a similar design and get released between 1935 and 1938. They will help replace steam traction, while raising the average service speed (the double railcar could do a whopping 80 km/h). They mean to be a faster, slightly more expensive alternative to the "Billards" already in the set.

In this screenshot you can see a small town whose brewery is serviced by two short freight trains: one is bringing its full load of cereals from a nearby farm, and the other is waiting at a station for the next load of beer. Both are tracted by brand new Brissonneau-Lotz diesel locomotives. In the meantime, a local train, made by a single railcar pulling a couple of old, repainted 2-axle coaches and a new railcar trailer, is leaving the passenger station, while the new, fast DMU of the newly-inaugurated inter-city coastline is about to end its daily run in Auxerre.

Keep it up Snail - this looks really good! 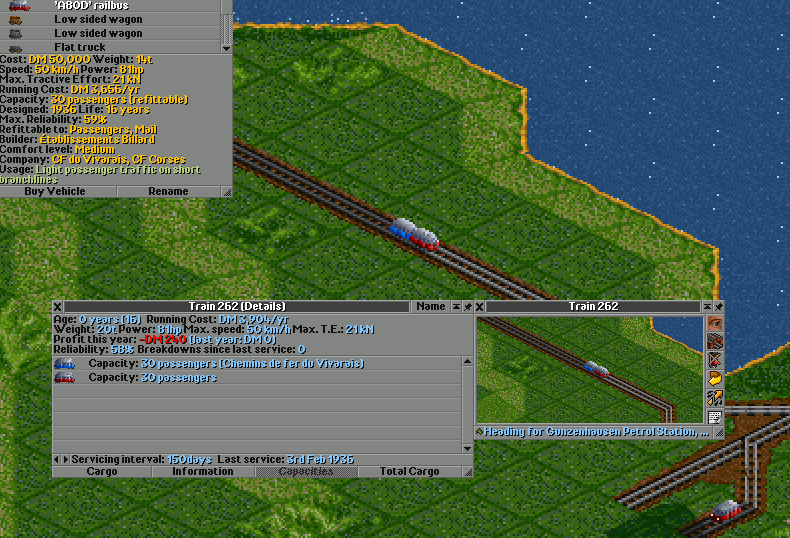 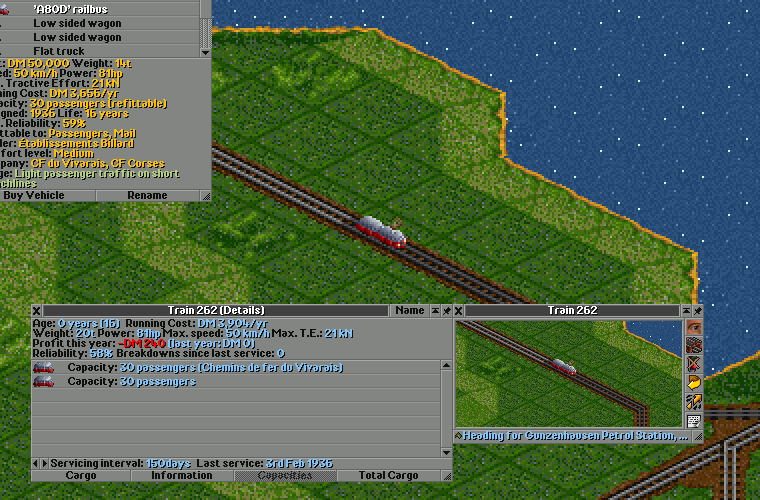 That's a bug that had to do with the way I coded those wagons. It will be fixed in the next release (already fixed in my development version). Thanks to the improvements in OTTD, I now implemented that feature in a simpler, more streamlined way that fixes that bug (and makes a few more combinations possible). The downside is that it will need a more recent OTTD nightly to display correctly.

More technically, I first used the user-defined bits to check the previous wagon's random bits, but now, thanks to the improvements in var61, I can access the previous wagon's random bits directly. As a result, liveries in push-pull consist are easier to change. There are still, however, a few cases where there is no alternative to using user-defined bits though :/
The French Narrow Gauge Train Set is now released! Get it here
Top

Just another small bug report. The Bhe4/4 (Catenary - Rack Rail) somehow does not reserve its track correctly. I had several cases in my game where I replaced older rack rail steamers with the Bhe4/4 and while moving accross the switches, just ran into another oncoming train.

And I shall add :

- same train (Bhe 4/4) will only reserve path with a signal (put in front of the depot for example), and only if the track is catenary (obviously) AND rackrail.
- if you set up a portion of rackrail in front of the depot (with a signal, in order to reserve track), and the rest of the track without rackrail, the train will only reserve the portion with rackrail, and go on blindly in the un-racked section.
- this works both with a catenary depot and a catenary+rackrail depot.
- another problem concerning the Bhe4/4 : if you build it in a catenary+rackrail depot, you can't downgrade the depot (to catenary only) while the train is in.

Wow, this path reservation issue sounds like it may be a bug with OTTD rather than with this specific grf...
Eyecandy Road Vehicles | Fake Subways | Supercheese's NewObjects

So the only solution o this is the make the entire line rack rail?

Welp, their goes the speed.
Something goes here, hell if I know.
Top

The Irish wrote: The Bhe4/4 (Catenary - Rack Rail) somehow does not reserve its track correctly.

arikover wrote: - same train (Bhe 4/4) will only reserve path with a signal (put in front of the depot for example), and only if the track is catenary (obviously) AND rackrail.
- if you set up a portion of rackrail in front of the depot (with a signal, in order to reserve track), and the rest of the track without rackrail, the train will only reserve the portion with rackrail, and go on blindly in the un-racked section.

Although I don´t have the newest code, the only thing special Snail´s rack vehicles do is to increase tractive effort when on rack rail, IIRC:

IMO, the described behaviour (faulty track reservation) should be an OTTD bug.

Never noticed this myself!

As Michael pointed out, the only advantage that train has is to have higher TE when on rackrail tracks.
If I remember correctly, I probably coded it setting NRAE (electrified, rackrail) as its default rail type (I don't have the code handy to check this). Then, it can also run on NAAE (electrified, normal adhesion) because it's a compatible rail type. Perhaps this has something to do with the issue?

Did you also try this with other rackrail engines, i.e. the 021T steamer or the HGm 2/3 diesel?
The French Narrow Gauge Train Set is now released! Get it here
Top

I'm running r24212. As far as I can tell, this is the only engine doing this. The 021T defenitely does not have the issue. The HGm2/3 i haven't received yet.

While we are on the subject of the Bhe4/4, would it be possible to raise its top speed on non rack rail to let's say 40km/h and with rack to maybe 20km/h? Currently it is really terribly slow.
*** Ce French Train Set ***
*** Visit my transport related pictures on Flickr ***

Llanfairpwllgwyngyllgogerychwyrndrobwllllantysiliogogogoch
"A committee is a group of men who individually can do nothing but as a group decide that nothing can be done" (Fred Allen 1894-1956 US radio comic).
Top
Post Reply
201 posts