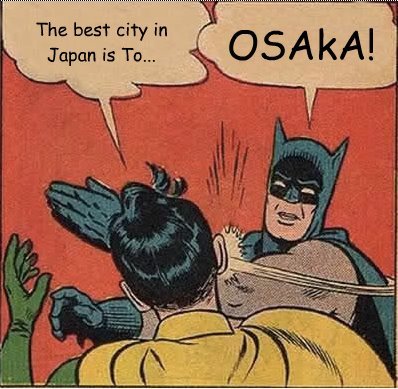 Then this zoomed out view of Osaka is for you.

I want to see the Osaka Loop Line completed!
Any opinions expressed are purely mine and not that of any employer, past or present.
Top

I'm tempted to give it a go too...I like scenarios based on realistic terrain. Also I enjoy using new trainsets, and it reminds of A-Train. Though the Japanese track without catenary looks a bit weird.
Soccer Mad Boffins
Watch my YouTube Channel
Top

In the mid 80s the Honshu and Shikoku railways were connected via a set of bridges using Yoshima Island as a stepping stone. Passenger trains now run between Okayama and Takamatsu.

Else where, mineral services are being set up. I chose not to do this early on because mineral wagons early game have low speed limits and would slow the network down too much. The modern wagons however have comparable speeds to passenger trains. The first mineral routes were on Kyushu, serving the steel mill in Kita. The station was wedged between the mill and the passenger station. While the approach is not the most efficient one ever due to space issues, the low traffic levels will mean it will cause no problems. Finished steel is transport to the factory at Kagoshima. 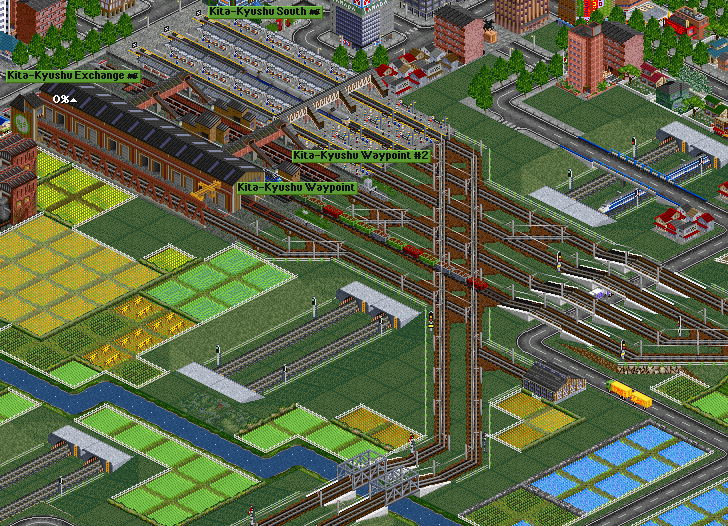 Like!
Any opinions expressed are purely mine and not that of any employer, past or present.
Top

In 1988 the company built a second Shinkansen between the Tokyo Metropolitan area and Sapporo, calling at Yamagata and Aomori.

The station in Sapporo was built adjacent to the existing passenger station.

Odate station and junction on the Snail Rail line, with the new Shinkansen passing nearby.

The southern terminus of the Shinkansen is adjacent to the existing station in Kawaguchi. Getting the station in required a lot of help from the urban planning faerie. This shot is a full view of the Tokyo metropolitan area.

Shizuoka stations. Little has changed here layout wise from the shot a few pages back, even though they are 60 years apart. One of the calmer places on the Honshu network.

The track layout near Morioka station has been altered, with the addition of an avoiding line to allow Northbound passenger trains to bypass the sawmill traffic, removing a bottleneck.

Lastly, a zoomed out world map circa 1990. I might do a few route maps at some point to show the various passenger routes, of which there are currently 55, excluding Shinkansen trains.

The line between Kyoto and Osaka as it was in 1948. At this time, traffic, passengers in particular, was relatively light, allowing freight trains to pass through the stations without causing many problems.

By 1998, things are looking very different. Kyoto East has been greatly expanded to cope with the additional passenger services. Osaka transfer has also had an extra platform added. Osaka North however remains unchanged as that particular route still see relatively light traffic. Freight traffic increased massively however and now bypasses the two cities on an avoiding line.

Okayama North in 1948 was the terminus for three passenger routes, however as the intermediate cities on those routes were quite small, traffic was light. This meant that at the time, it was perfectly reasonable for freight trains to cross the station approach. 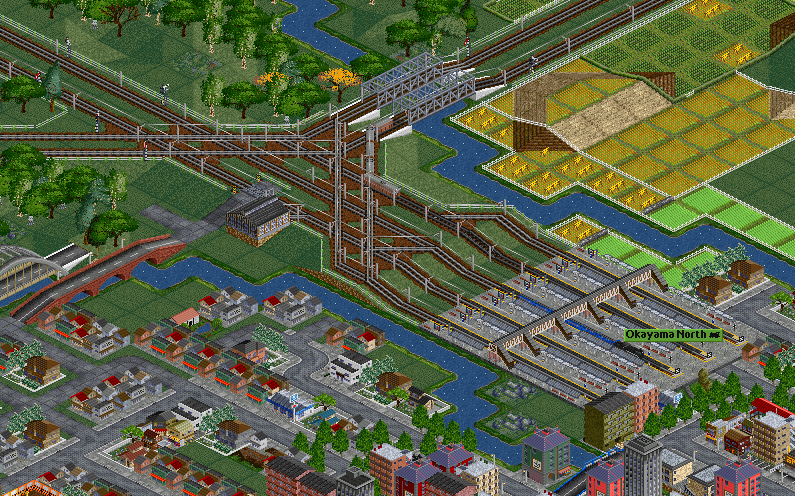 Cities grow however, and passenger traffic increased steadily over time. While this increase wasn't as dramatic as in other locations, it was enough to force me to build an avoiding line for freight here. The Shinkansen station in the centre of the town is also visible.

Fukushima in 1948 was a simple, three platform station serving as the intersection of two passenger routes. Traffic levels were very low. There weren't even any freight trains which passed through. 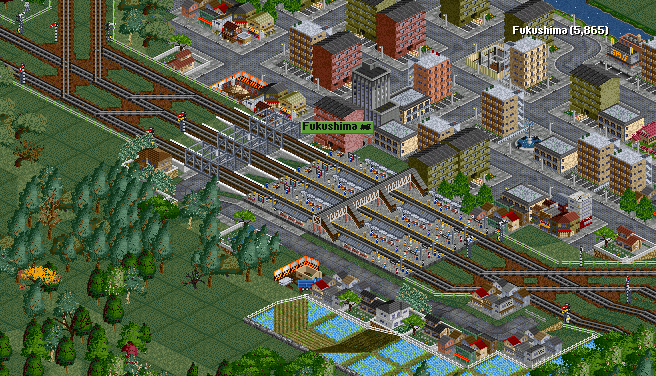 However its location has made it a major hub. It is now served by three different passenger routes, running a far more intensive service than in 1948. In addition, freight traffic along this mainline has exploded. Slow traffic was a constant issue here until the issues were finally resolved in 1996. Track work for the various Fukushima junctions extends out of this shot in all four directions.

I agree with you. Cool and beautiful screenshots

Sure, here you go.

These are giving me joy and pleasure.
Official TT-Dave Fan Club

Nine saves from this particular game, in intervals of roughly ten years, which show the steady development of the company over the years. They should work with the latest nightly build. GRF list is here. Dip in at your leisure.

Some parts of this game are Jam-o-saurus Rex. I won't be surprised if you find oodles of construction errors while looking through.

Monitoring the western Honshu mainlines has made me realise how busy they are. Hiroshima is probably one of the more crowded areas.

Tsu, though on a stub of a line, is also quite busy, mainly due to freight. Being unable to add large numbers of trains to this area, expansion has been achieved with the use of ships to bring in additional grain and livestock from Nagoya, and trucks to connect more local farms and to transport goods to Osaka.

The aforementioned ships on the river west of Nagoya. The station of Nagoya West was recently expanded due to increased passenger traffic. The station approach was also reworked. Previously the lines west and south merged into a single line before reaching Nagoya. now they have their own approaches. The line the skirts around the top and left of the picture is a recent addition, built for steel trains nor serving the factory in Tsu.