On Honshu, some of the traffic hubs have been redeveloped to better cope with the rapidly increasing traffic from both passengers and freight on the island.

The changes to Fukushima have been relatively small.

Nagano however was far busier, and required some rather drastic changes, with multiple avoiding lines.

On the plus side, the company passed the 500 train mark in 1958, 38 years after its formation. The grouping feature keeps them manageable. 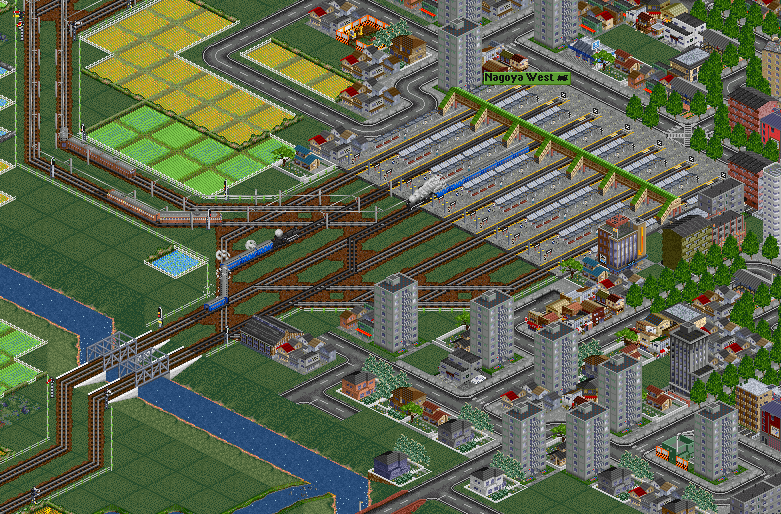 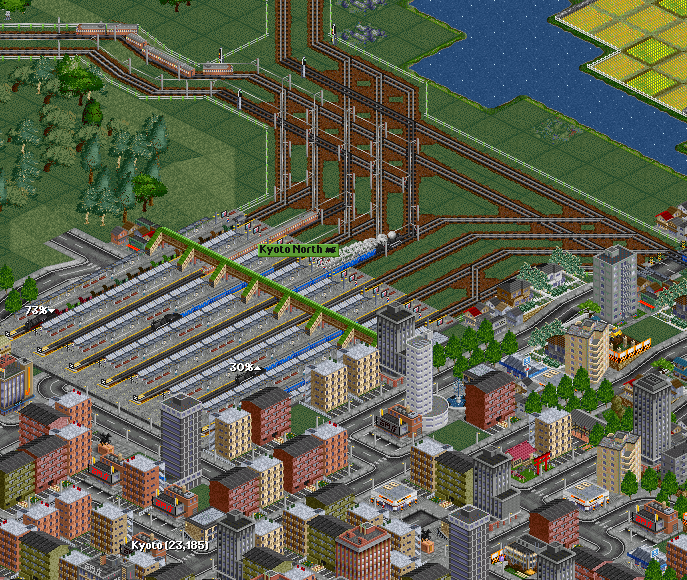 Freight services on Hokkaido are now up and running, though currently only wood and goods are transported. Agricultural services will be added once extra capacity has been made for them as traffic is currently very heavy.

Akabira, a simple through station crowded with wood trains. 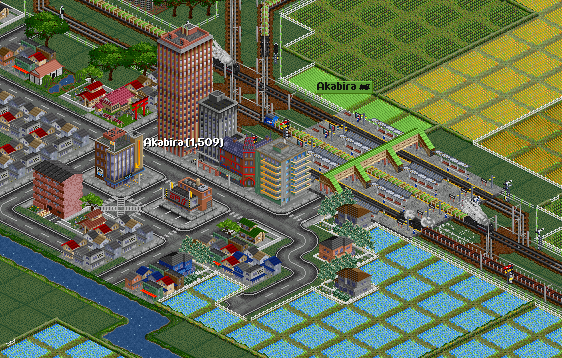 A map of Hokkaido as it is currently. Comparing it with the previous map, you can get an idea of how much has been added for freight.

Modernisation is here! A Shinkansen line from Tokyo to Osaka, with an intermediate station in Nagoya was constructed in 1967. The following year, an additional route from Tokyo to Niigata, via Takasaki was built. Back on the old networks, steam is finally giving way to electric traction, with around 650 trains undergoing replacement. This process is breaking the bank, and currently on hold while the company recovers financially. The new Shinkansen trains, while there are only 23 of them, are currently propping up the 700 conventional trains as they are replaced. Yearly rail profit is currently ten billion yen per year, down from around fourteen billion, however annual infrastructure costs and overheads amount to around nine billion yen. Without the three billion yen per year the Shinkansen trains provide, the company would have crippled itself in its attempts to modernise.

Old meets new as a Shinkansen train on the line from Tokyo to Osaka crosses the old line from Shizuoka to Takasaki, on which a pacific hauled passenger service is travelling. This was in 1967, prior the the full electrification of the old network. 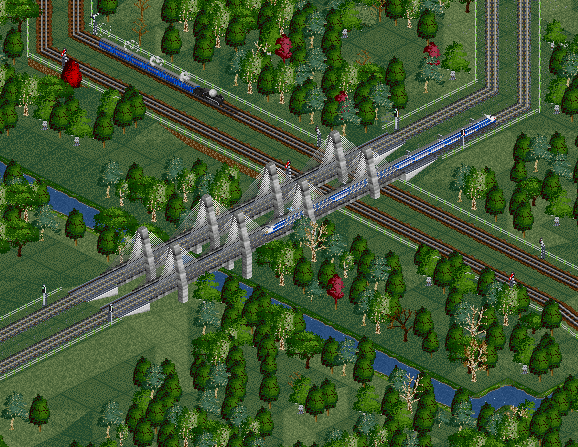 This is Takasaki in 1969. By now, the majority of passenger services on the network are EMUs, though steam still has a strong presence on freight routes, as can be seen with the Tokyo-Takasaki goods train. The Shinkansen station is also in view.

The Tokyo-Osaka Shinkansen has been extended all the way to Fukuoka. It now serves Tokyo, Nagoya, Osaka, Kobe, Okayama, Hiroshima, Kita and Fukuoka.

The Shinkansen station in Okayama was quite difficult to build due to the two rivers east of the city, and the old Okayama-Hiroshima line to the west. The station has been wedged between these, although some of the pointwork for the eastern approach is between the due rivers due to lack of space in the city centre.

The station in Fukuoka adjoins the old station and sits on the edge of the city. As with all Shinkansen stations, buses carry passengers from other parts of the city to allow them to continue their journey by rail. 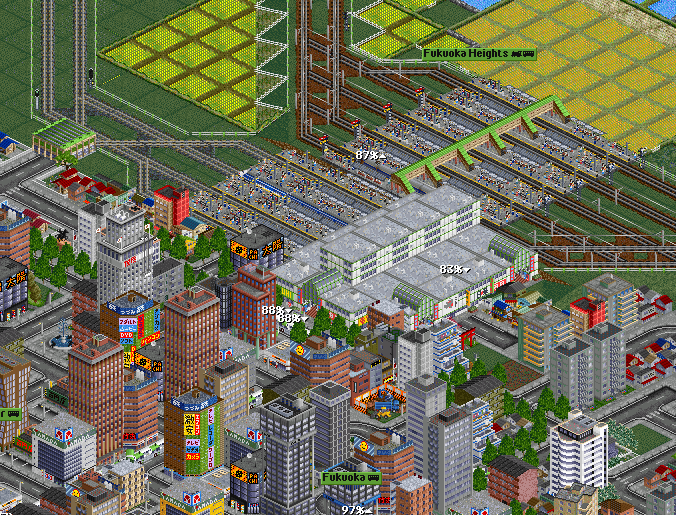 Back on the old networks, moderisation has been completed, with all trains now hauled by electric traction. The higher average speeds means the networks are running more smoothly than in the steam days. However most towns and cities have grown somewhat, with more passenger train required to cope with demand. More trains means more problems, therefore problematic junctions and station approaches, such as this one in Morioka, will have to be altered to prevent delays. 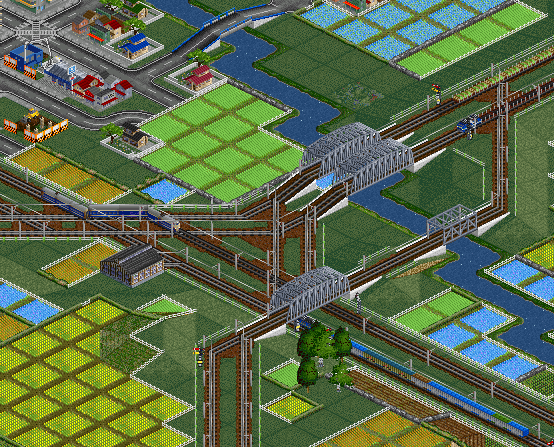 Company HQ and a map of all the fun I am having. 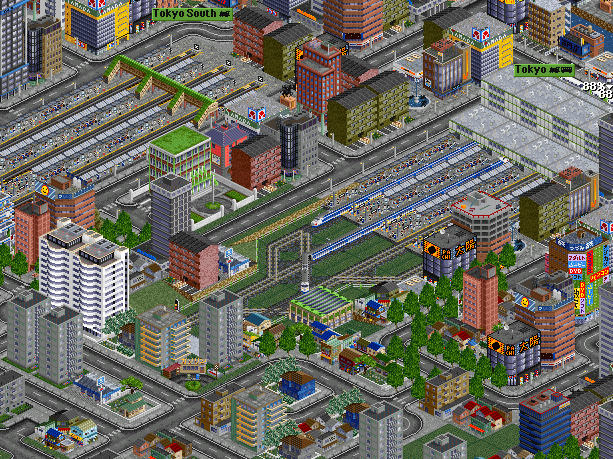 The map looks impressive! How long have you been playing on this map?
Top

Probably about two days solid play time, most of it spent paused.
My OpenTTD screenshot thread.

Wow! I thought that work took much more time.
Top

Standardising the way you build stations, junctions and routes as a whole reduces the time you spend building. You might notice that a lot of my stations follow similar design patterns.

It's a case of finding what works for you and sticking to it where possible.
My OpenTTD screenshot thread.

I'm a sucker for a good Japan set game and this ones a damn good one.
Also two days of build time! that's some impressive results.
Top

Your shots have actually made me start my own Japan Game

I highly recommened the Scenario of Japan. The fact that it is an Archipelago with varying terrain prevents the usual grid layout for rail networks. Makes for an interesting game.

In other news: I had to rebuild the approach to Tokyo Shinkansen station. Were this a countryside freight station, I might have been tempted to build a ro-ro station, but this is Tokyo so that wasn't really an option. The approach is hideous and I hope the gods forgive me for this heresy. 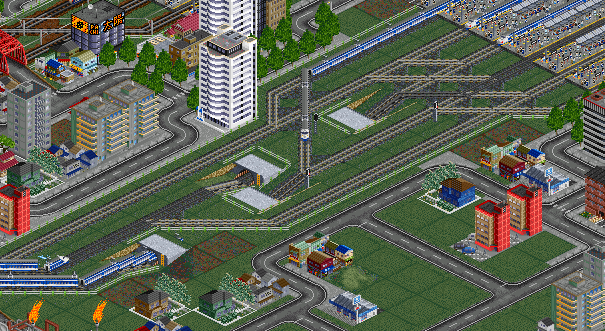 I'll have to have a look

. Can I just ask where you got the Japanese Track Set from? I can't seem to find it
POTM August 2012 Joint Winner
My Screenshot Thread
Top

it is in the japanese train set (on bananas)

Nice shots, makes me want to try Japanese sets... May I trouble you for the grflist?
My visits on the forums are sporadic only, so PMs may go unanswered for a long time. If you wish to report a bug etc., the best option is via DM or ping on r/Openttd Discord
Top

Here you are sunshine. 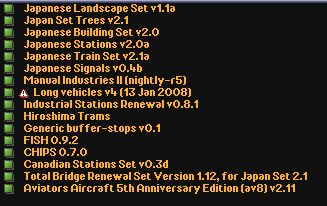 do you have any airports?
if you don't have them, i would suggest you use them in combination with World Airliners Set, i bet you can make wonderful airports

Honestly, I hate using planes. They make things too easy.

That said, I did setup a Tokyo-Kyoto-Fukuoka route while I was replacing all my trains as a precaution. Might get rid of them now. They've served their purpose and my Shinkansen lines make far more money.
My OpenTTD screenshot thread.