Nice set of trains that became an staple of my playthroughs, however if it had more diesel and electric engines it be nice.
I feel it scales good up until 1945, but then the years gap to get an significant improvement gets larger.
Top

MlemandPurrs wrote:Nice set of trains that became an staple of my playthroughs, however if it had more diesel and electric engines it be nice.

I have been thinking about a v2 which adjusts the diesel and electric engines. No promises about 'if' or 'when' though

I just remembered originally having came by to report something:
The Livestock Car is not company coloring, its always grey.
Top

Really great alongside Road-Hog and FISH.
Though, i have an impression there's a lot of diesels and just 3 electrics if counting the Double Juice...
NewGRFs by Tony Pixel :
North American Passenger Railroads
Not Enough Subways

acs121 wrote:Though, i have an impression there's a lot of diesels and just 3 electrics if counting the Double Juice...

As someone who grew up with 1980s British Rail, I do enjoy the diesels that are currently in the set, especially for freight, though its true that a few more electrics wouldn't go amiss...
Soccer Mad Boffins
Watch my YouTube Channel
Top

I like to do bigger maps over longer time, so I start my games around 1840-1850 and it is only possible thanks to this very nice set of trains and wagons.

The Caboose Car is out if alignment. See screen shot.

2 years in the making, Iron Horse 2 is an end-to-end rework of Iron Horse.

Dive in and play.

Known issues for 2.0.0 release
Thanks to, in no particular order: Cheers 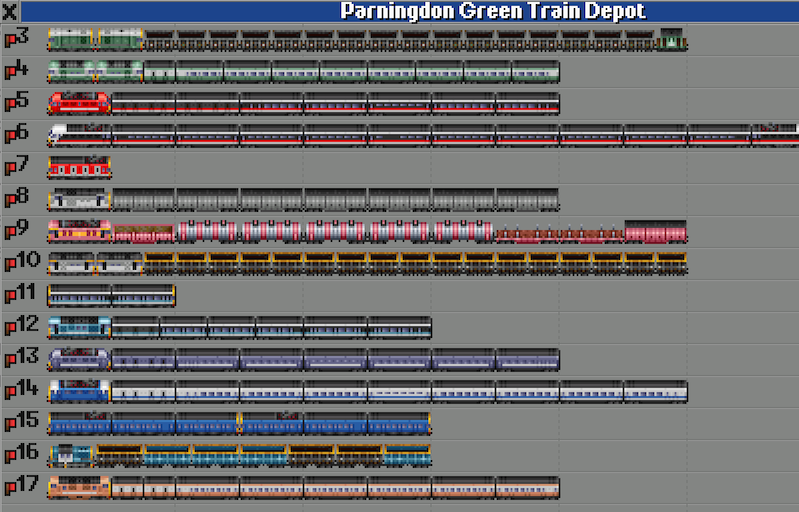 14 types of container wagon spread across 3 generations. Around 300 different combinations of container type and colour, automatically selected to match the cargo!

* Bug reports welcome, personally testing this many container combos was out of the question 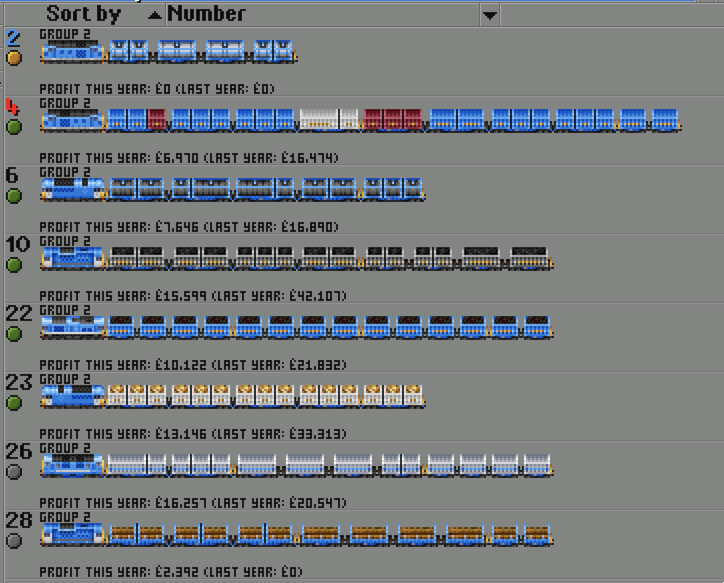 Wow Andy! I've been hauling containers by road for years and all the different container types you have here are amazing. Great work! Very realistic. All you need now is completely random box colours and it'll be perfect!
Top

Considered it, maybe in the distant future

Iron Horse 2.1.1 now on Banananaaaaaaaaas. Thanks for bug reports.

This set looks very interesting. I wonder what was the original idea behind it? What's the ideological difference between this, NARS and UKRS? I'm looking for a balanced trainset to use for my 1850-2050 game. I'd like to use horse carrieges and ships alongsite early steam trains for 19-century. I wonder if this set would be a better fit for my case than NARS (or UKRS?). I prefer train engines and wagons to look close to TTD original and not having a lot of short wagons that require more micro-management. In other words, I prefer gameplay over eye-candy. But graphics should be semi-realistic (not like NUTS god forbid) and consistently looking.

PS: checked it in game. Running costs of all trains are like 8x compared to default trains. Is this supposed to be aimed at hard-core expert players?
Top

Iron Horse 1 was an attempt to provide a full gameplay set for 1860-2020 with the most minimal set of engines (around 20), as that was as an interesting goal at the time. The ideological approach was originally 'it should always be obvious which engine to choose'.

The minimal approach was inspired by an observation Pikka made about grfs that have very many over-lapping vehicles, and that attempts to provide small stats differences between them were tending to lead to one vehicle that was always slightly better than the others. So why not just have the 'good' vehicle and drop the others?

Iron Horse 2 does not attempt to be so minimalist, as in a large map it's boring to always just use 'the strong freight engine' or 'the fast small engine' depending on the type of route and cargo.

With Iron Horse 2 it's quite viable to use (for example) 2 small freight engines or 1 large one, or to use universal engines for freight. Whilst engines do have distinct roles, certain choices can be made purely for appearance, and the net profit on the route will often come out about the same.

Iron Horse 2 provides an excessive number of wagon types, deliberately: Iron Horse 2 also aims for easy auto-replace (almost brainless) if the player chooses to use it that way. So when a new generation of trains becomes available, there is usually a direct replacement for existing engines without excessive (unnecessary) power creep. There are also sometimes new models which do offer a large jump in power over time.

Iron Horse 2 also offers a handful of daft features, like automatic variations to appearance of some vehicles depending on consist or cargo, stupid livery tricks (ctrl-click in depot) for some vehicles, and a few other silly features.

Finally Iron Horse 2 introduces vehicles between 1860 and 2022, so it covers a long range of possible game dates.

Originally I played a lot of UKRS 2 and NARS 2, and in some ways Iron Horse is a reprise of UKRS 1 and 2. In Iron Horse 1 many of the sprites were even tweaks of Pikka's UKRS sprites (with permission). Iron Horse 2 is 100% redrawn, and sometimes me and Pikka trade ideas as we both continue to work on train grfs, in different directions.

Iron Horse 2 is also influenced by NUTS, and a lot of conversations with V453000 about train roles and sprite styles. You'd never see the resemblance in game, but NUTS definitely provided part of the inspiration.


PS: checked it in game. Running costs of all trains are like 8x compared to default trains. Is this supposed to be aimed at hard-core expert players?

Hard to say. I've been playing for nearly 15 years so any objectivity about difficult was lost a long time ago. On medium running costs I find it easy to make money with Iron Horse.

Thanks for such a detailed reply! How does your vision compares to NARS? I'm trying to decide between this and NARS as they both look acceptable for my taste and both have very high running costs (not a problem thanks to BaseCosts, but I'll have to figure out the multipliers that are not too hard and not too easy for my level).
I like the focused approach of a smaller number of trains that are distinguishable yet I'm not against a little variety if it's not excessive (like some larger sets).
I also like the look and feel of the original trains that are mostly the same length => easy to set up a train for a certain total length, easier on the eyes. UKRS felt short in this regard, especially in later era wagons.

PS: I'm fine with the vanilla or OpenGFX+Trains if only they'd include extended time period as I want a 1850+ game.
Top

NARS 2.5.1 is a great set, I've played a lot of NARS games. Hard to recommend Iron Horse 2 over NARS 2 or vice versa.

Differences that reflect my taste: Iron Horse 2 offers consistent wagon speed limits, and it's easy to make trains that are whole-tile length.

What's the deal with passenger and mail cars being so extremely expensive to run? I can't seem to make any profit from passengers with these trains (-$20k to -$50k profit, with running costs for trains around $50k). But my freight lines are somewhat profitable (not nearly as profitable as ships though.. I'm playing in 1882 currently).
Top

phobos2077 wrote: ↑
30 Nov 2019 13:44
What's the deal with passenger and mail cars being so extremely expensive to run? I can't seem to make any profit from passengers with these trains

Could be an issue with the earliest generation + the speed of the train affecting payment.

But from 1900 onwards they print money

These are mostly fully loaded, both directions. 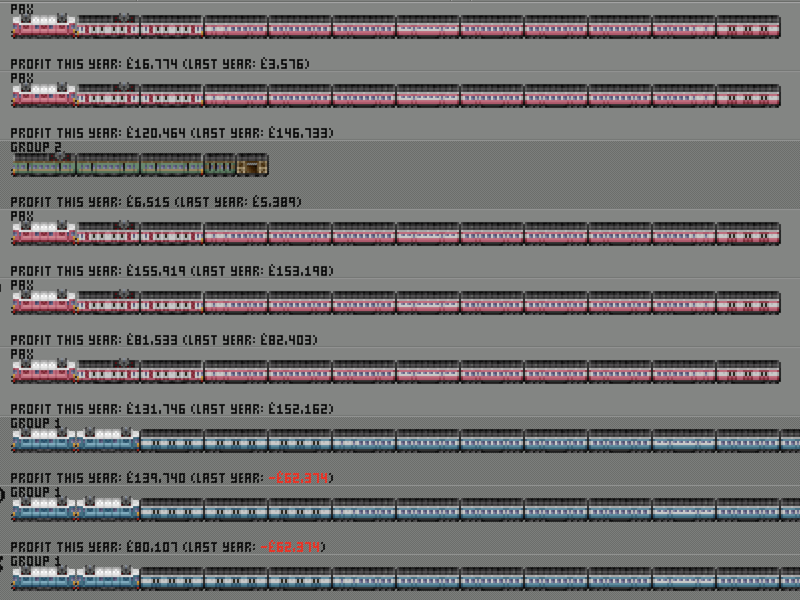