Reading your blog, I can't wait to see what this new loco is, but is there a possibility of, say, a maglev, another monorail or an actual high speed EMU in the future?
Another thing, where it showed the picture of the YETI Dudes, will this mean there is full support of YETI now? Or just that cargo?
Also, why is most of the stuff in the set 0.5 tiles? It makes them look ever so squashed up. Like pug-trains really. But good work, can't wait to hear about Pineapple Ships, Av10 and Pineapple Houses in the future
IJN Takao is life. Why did the Shinano get converted? Gotta love NeuroTec for Garry's Mod. I even have a server!
How Can Mirrors Be Real If Our Eyes Aren't Real? - Jaden Smith 2014
Top

doxlulzem wrote:Reading your blog, I can't wait to see what this new loco is, but is there a possibility of, say, a maglev, another monorail or an actual high speed EMU in the future?

I've considered a TGV-style loco before, but to stand out it would have to be far more powerful and faster than anything else in the set. It just doesn't fit, I'm afraid. Similarly, no maglevs; because they're a different railtype, different era, different acceleration model even, maglevs would essentially be a whole other set - one that doesn't match current feel of 10cc.

The new loco in the set is mid-game, middle-of-the-road statswise. Like the dome car, it's just adding a bit of flavour rather than extending the capabilities of the set.

doxlulzem wrote:Another thing, where it showed the picture of the YETI Dudes, will this mean there is full support of YETI now? Or just that cargo?

All cargos should be supported. YETI Dudes are the only ones that are getting YETI-specific sprites.


doxlulzem wrote:Also, why is most of the stuff in the set 0.5 tiles? It makes them look ever so squashed up. Like pug-trains really.

0.5 tiles is the normal train car length in TTD. Only articulated vehicles can be longer than this.

If you compare the oblique "/" views in the picture I posted on my blog, you'll see that they are the same length. The reason the Pineapple diagonal "-" views look shorter is because TTD does funny things with the vehicle speeds on diagonal tracks - the vehicles speed up and therefore spread out. Most grfs stretch the diagonal views of vehicles to hide this spreading out; Pineapple, because it's rendered, doesn't.

A few people have looked into fixing this speed / spacing discrepancy before, with varying degrees of success. I might have a proper go at addressing it this summer. Maybe.

Would you consider adding a parameter to increase x2 the capacity of wagon/MUs? I find the 30t / 40pax a bit low for my games, I'm currently using these locos to haul wagons from another set that have capacity of 60t, they can handle the extra weight no problem so power and other stats wouldn't need changing, it just looks a bit funny as the other wagons have a different graphic style
Top

At the risk of stating the obvious; build longer/more trains? 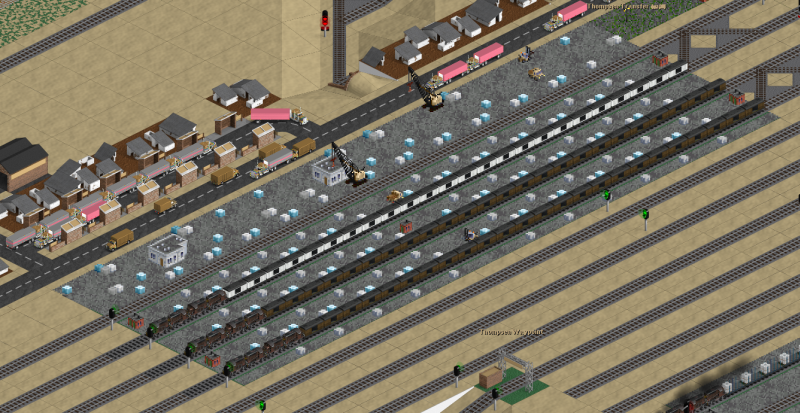 Sorry, for digging up an old thread, but I was curious if these trains were flagged to flip in depots or not. If this was mentioned previously, you'll have to excuse me just waking up and not having my contacts in to read things in depth

Not really an old thread being that the last post was 3 days ago...?

What is this whole depot flipping thing anyway?

Basically it would allow you to run engines forward from either end. For example, you could flip cars and have the loco push them.
Top

Oh no, i get the whole flipping thing, i just wondered what made it depot flipping? Wouldnt it also flip at stations or track end?

Aaaand I guess I answered my own question

Every time I try to post a picture it's waaaay too big. How can I fix this?
Top

Yay!
http://i.imgur.com/Pk9PG8Y.jpg
Edit: Every time I try to post a picture it's waaaay too big. How can I fix this?

Image size must not be larger than both 800 px wide and 600 px tall.
Do you like drones, quadcopters & flying toys? Check out Drone Strike Force! Look great pikka!
IJN Takao is life. Why did the Shinano get converted? Gotta love NeuroTec for Garry's Mod. I even have a server!
How Can Mirrors Be Real If Our Eyes Aren't Real? - Jaden Smith 2014
Top

Alright! to celebrate the well-received release of NARS 2.5 (ho ho), I have today also released an update to Pineapple Trains!

This update, 1.2, features one new diesel locomotive – the Stanley Shark – as well as a new dome passenger car and the YETI cargo load I posted about earlier. All very American to fit the theme of NARS, you see?

This, for those who don't read my blog, is a comparison between the new Pineapple dome car and the dome car I drew for the original 10CC project about 2 years ago! The similarity is pleasing!

The addition of the dome cars has also required the addition of a new GRF parameter, to allow you to select how passenger (and mail) cars are built. This parameter offers four options, which are hopefully fairly self-explanatory. If not, ask away!

The update is now available via bananananas. Enjoy!

First off, thank you for the update to Pineapple Trains and NARS. I appreciate the update to NARS, even if other people don't. I know you no longer wanted to update the set, so doing one last update was a extremely nice gesture of you. Thank you.

I only have a few issues with that set, most of which I can fix. Do you have the leftover sprites by any chance? (I've done some coding, and GRF coding seems pretty similar.)

As to Pineapple, I think this is also a excellent update, even though I don't use 32pbb, for various reasons. I personally think you've done some excellent work on the Sharknose locomotive.

Can I make a comment about the Dome-Obs Car, if you don't mind?
Top

I can provide NARS sprites for you to play with. It's probably best discussed in the NARS thread.

You're welcome. Ok, a few comments on the Dome.

1. The end looks like it came off the DMU in the set. I'd like to see some sort of drumhead for the rear, and the windows split into 6.
2. Could you add a shorter window in the blank space? It looks a little odd there.
Top

The end is the same as the non-dome observation car, which was indeed modified into the DMU.

I tried various window options under the dome, but in the end the blank space was the only one that really felt like it worked, given the dimensions and the "chibiness" of the car.
Pikkarail.com blog | Patreon
Current development: UKRS3 - Av9.8 - TaI32 - CivilAI
Dev reference: NML Specs - NewGRF Specs - Savegame Internals - NoAI API - NoGo API
Top

Hey, I'm just wondering, how many more trains are going to be added to the set? I can't help but always want more to play with and for variety. Though the current amount is still pretty nice.