Is it possible to get these in addition to the zbase trains, rather than replacing them?

Edit: Never mind; I'll try to get over my Maglev addiction and use this set as-is...

So, over the last few days I played a small OpenTTD game with this NewGRF.
I really liked the design and level of detail of the locomotives and wagons, and I think they fit pretty well together with the graphics from the "32bpp extra zoom" project.
Thank you for making this NewGRF!

Anyway, for others players who may be interested in this NewGRF, here's a collage of screenshots (from different times in the game) that show some of the Pineapple locomotives & wagons in action: 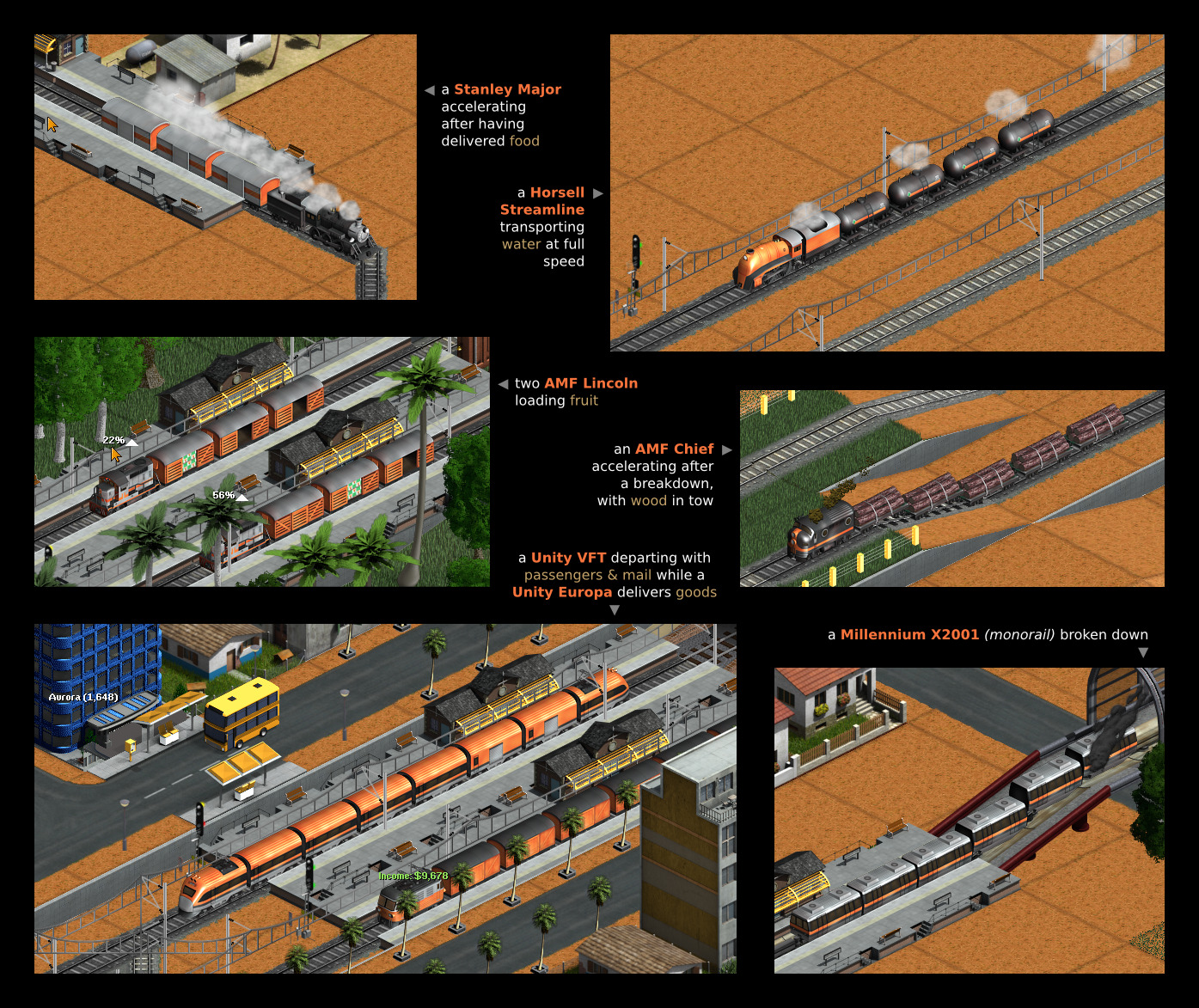 For the record, the game seen in those screenshots used:

Nice screenshots, I'm glad you're having fun with the set.

The "zbase trains" are the default vehicles, and (like pretty much all newgrfs) this grf disables the defaults. There may be other grfs which will put them back, but they'll be pretty unbalanced, stats-wise.

The first locomotives in the set are introduced around the turn of the century, so you could start the game in 1900 or 1920 or so if you wanted longer with the steam engines. Also, if you're short on money, it may be better to keep the cheaper steam engines running for a while rather than replace them all with the expensive Chief right away. Likewise, the Gronk and B1200 are quite a bit cheaper than the Lincoln or the electrics, so may actually be a better choice for short services or lighter trains. To take your screenshot as a case in point, I wouldn't usually use a Lincoln to haul just 3 wagons!
Pikkarail.com blog | Patreon
Current development: UKRS3 - Av9.8 - TaI32 - CivilAI
Dev reference: NML Specs - NewGRF Specs - Savegame Internals - NoAI API - NoGo API
Top

And good point regarding the cheaper models; I think my perception of their usefulness may have been skewed by the fact that my goal with this scenario wasn't to maximize profits, but rather to make the desert towns grow... So I always used short trains + the strongest available locomotive for the food and water chains.

I still wonder about the monorail though: What is it intended to be good for? It doesn't really seem to outclass the "Unity" class electric trains for passenger services.
Top

archy wrote:I still wonder about the monorail though: What is it intended to be good for? It doesn't really seem to outclass the "Unity" class electric trains for passenger services.

It's a bit cheaper, and carries more passengers per carriage - it's more for commuters and transfers than long-distance. It's also a homage to TTO, which had a single passenger-carrying monorail as the final vehicle of the game.

Here's a blog post, with a preview of what's coming in the next update.

Some nice, thanks for sharing!

Looks nice though.
Thanks
Top

Bananas has a webpage

The 1.1 "Power!" update is now available on Bananas!

Enjoy, and as usual please let me know if there are any problems.

Enjoy, and as usual please let me know if there are any problems.

What is this joyous filth!?

I also note on your blog that someone has pointed out ananas is Dutch for Pineapple.

Pretty sure ananas is everything for pineapple except English. Which obviously has to be difficult!

But back to the trains. I can't believe how sharp these look!
Official TT-Dave Fan Club

and majorcan (spanish in mallorca...whatever it's called) -> piña

i really like that blue electric loco, very detailled design

Refitted MU wagons can currently receive the wrong capacity (default cargo multiplier, rather than the callback result). This will be fixed in the next version, but since the set is 160mb to download I'm not going to rush out a patch just for this.

When trying to play with YETI grf, looks like there is no support for the Uranium cargo from any of the wagons. Is this something that can be addressed in this grf, or is it something that the YETI has to fix?
Top

Cargo classes are generally quite generous in this set. Like I said in the YETI thread, there's currently one little blind spot which I assume is the problem.

Okay, I'm not waiting for the third.

I just tried to build an intercity train and the Unit VTF seemed like a nice choice, and its top speed makes believe that it's not a metro either. Yet it seems to have an extremely hard time in actually speeding up or even reaching its top speed - even on a really flat track (which was difficult to build in hilly terrain) and unless a train length of 7 tiles is already considered too long for an intercity express. Can it possibly gain a bit more power in future releases?

Despite the name, the VFT is still 'just' a general purpose EMU, not a high-power trainset. I'd typically use it on trains of three tiles, with four tiles being a heavy train with marginal performance. So, yes, for a seven tile train I'd definitely be using at least two power sets, maybe three if I wanted good acceleration in hilly terrain.
Pikkarail.com blog | Patreon
Current development: UKRS3 - Av9.8 - TaI32 - CivilAI
Dev reference: NML Specs - NewGRF Specs - Savegame Internals - NoAI API - NoGo API
Top