As some of you know, I hail from a part of the Midlands called the Black Country.

It was named for a few things - firstly the black, sooty air that belched into the sky from the heavy industry that filled the area during the industrial revolution, and for the unique coal seam across the region which was so rich that it sat near the surface, so that the soil has a very dark colour.

There's an apocryphal tale that Queen Victoria, travelling on the Royal Train through the area, ordered the curtains to be closed so she didn't have to look!

The definition of the Black Country varies, but tends to be the West Midlands County to the north and west of Birmingham (although areas like Wombourne and Himley, part of Staffordshire, also tend to feature). Some people include Walsall, some include Wolverhampton - some are sure neither are in the Black Country.

The one thing we can all agree on is that Dudley is the heart of the Black Country. And Birmingham certainly is NOT!

In any case, I've put together a list of names of cities, towns, villages and other areas of note that come together to form quite a nice little set of British town names.

Although I enjoy the various British town names sets, it sits awkwardly with me that I set up routes between, for example, Welwyn Garden City and Royal Leamington Spa, which are nowhere near each other.

These will give your game a British flavour, but with names that most people won't be familiar with - which takes away the above awkwardness.

Of course, as a vanity exercise this solves nothing for me as I KNOW all of these places haha. But I'm a nice guy, so I thought I'd share them with you. 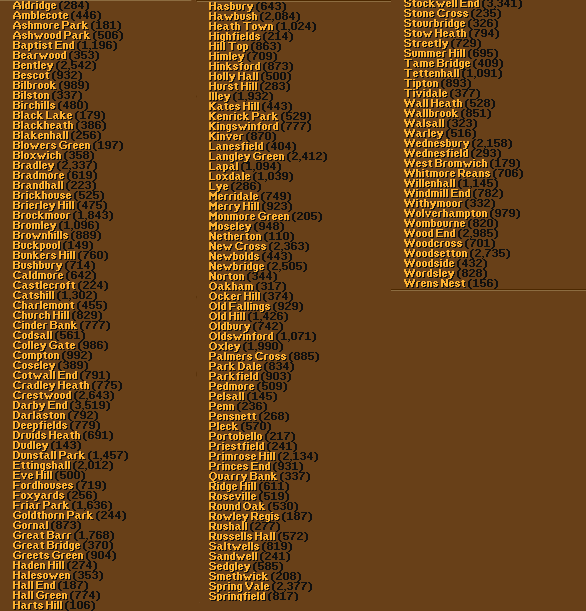 Ha. I live at one of those places!
Top

I have .txt file of cities I want to publish but how do I proceed to 'compile' town names set that OpenTTD will understand and use ?

Toooo complicated from some help I read