After over 5 years since release, NightGFX has finally received an update! This new release brings a major change by decreasing the level of darkness by 15%, making it much more bearable to play with while still giving a night-time feel. I also added the one missing sprite that OpenTTD has been complaining about for the last 4 years or so, making it finally "up-to-date", although I haven't (yet) included the 2x zoom GUI sprites found in standard OpenGFX. Other than that the set is basically still the same, so no big changes to the lighting effects yet, although I still would like to at some point, along with a few other ideas I have.

I've also made sure to take the time to create proper, layered source files this time around and actually save them, to make further editing in the future much easier.

Along with that I've been working on re-writing my simple documentation to be a little more in-depth than before, since after 5+ years away, even I found it difficult to get back into. Once I'm done I may post it here, but for sure I will add it to the directory next to the source archive on my website (link in first post) if anyone is interested. At least the basic build instructions are included in the source bundle now

See below for the comparison pics, and as before the set can only be downloaded via the online content. Let me know what you think, otherwise enjoy 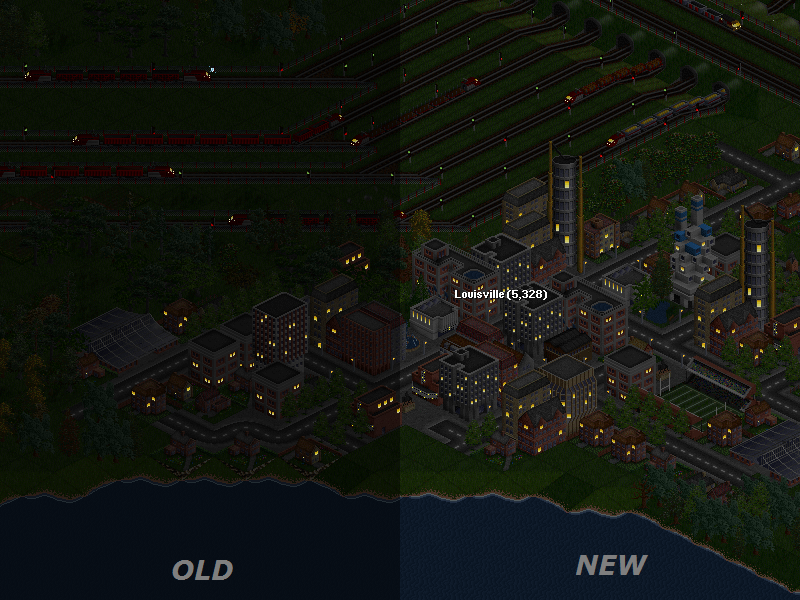 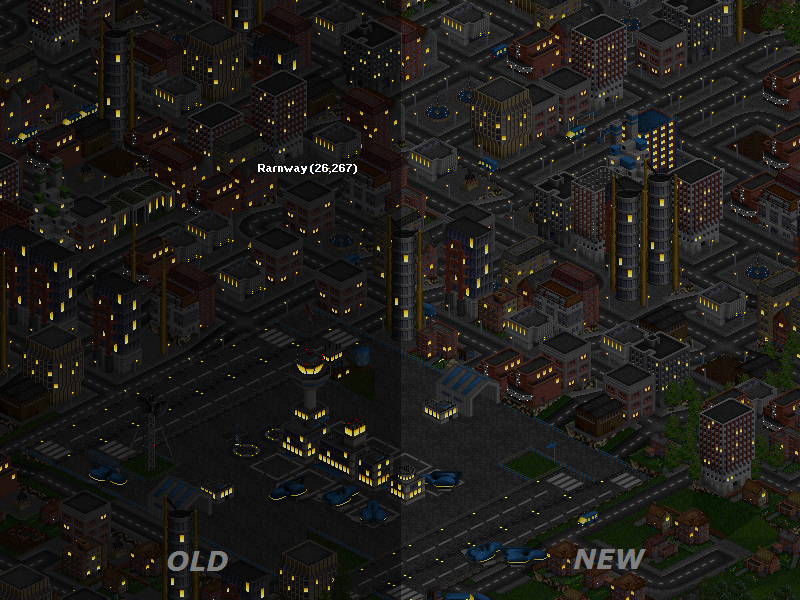 Let's get some night GRFs

I agree, and on that front, I've finally completed a first draft of my more in-depth tutorial for converting sprites to night:

I may have gone slightly overboard on my explanation; it sort of turned into a "How to make 32bpp graphics" tutorial rather than just focusing on doing a night conversion, but maybe someone will find that useful also.

Tutorial
==========
Since there were no complaints about the tutorial, I've gone ahead and added it to my website next to the source bundle for future authors to find. If you still happen to find any errors or have any questions, do let me know.

Progress update
==========
I've been working a little on adding some more lighting effects, starting first with a suggestion by supermop long ago to add some extra runway eyecandy at airports: 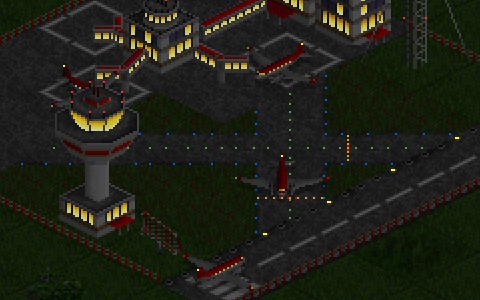 These lights unfortunately only really work on the City Airport, but it looks cool nonetheless.

Also started adding some navigation lights to planes and will do the same for ships. Improvements to industries and buildings will hopefully come next.

NewGRF News! (Sort of)
==========
So in the first post of this thread I made a claim that it is not possible for NewGRFs to detect a base graphics set, therefore making and playing with night NewGRFs wasn't really viable unless you wanted to always be stuck in the dark.

As it turns out, it is in fact possible for NewGRFs to detect NightGFX, and thus conditionally provide nighttime sprites only when it is active. It's done basically the same way you detect if another NewGRF is active, in NML specifically the grf_current_status function. The nightgfx_extra.grf file, which is part of the baseset bundle, has a GRFID (in this case "\FFOTN") which can be queried to see if it is active, and surprisingly it actually works despite being part of a baseset.

[Example]:
The way I did it was start by defining a simple test for NightGFX:

Later, somewhere in the graphics callback (just before deciding what spritesets to use) include a switch to test for this:

This switch will point to either the normal "daytime" graphics or, if the condition is true, a dummy/copy of that spriteset with a unique identifier that will later be used by the alternative_sprites block where the "night" graphics will be provided.
[/Example]

Doing this I was able to make a test NewGRF switch between daytime and nighttime by saving the game, exiting to the menu, switching base sets, and reloading the game. Admittedly it's a little bit of a hackish solution, but it does seem to work. It certainly could make it easier for NewGRF authors to decide to make night grfs now that it doesn't need to be exclusive

I'm just more than a little disappointed I didn't realize this earlier, it's so obvious

(The same technique could be used to detect other base graphics sets as well, as long as you know the GRFID to query, but what purpose that might serve I don't know.)

Anyway, hopefully someone will find this interesting; I know I certainly did

In anticipation of OpenTTD 1.9.0 releasing in a few days, I've gone ahead and updated NightGFX to include the new group livery GUI icons to make this set fully up-to-date alongside OpenGFX. (Thanks to Gwyd, planetmaker, and Brumi who made the update; I just copied it!)

Alongside the compatibility update I've also included the new airport runway lighting effects and the navigation lights for planes and ships. All airplanes and ships should have correct nav lights. These lights are only one pixel for now and may be hard to spot, but if you notice any that are wrong or missing please let me know so I can fix them

Also in this update I've added a super secret fun easter egg for people to find. 10 points goes to whomever finds it

As usual the set can be found via the online content. Enjoy!

It's a bit late but a new update for NightGFX is now available. Since I didn't release an update last year, this includes the new GUI sprites for OpenTTD 1.10 and 1.11, as well as some of the improvements that have been added to OpenGFX such as new hotel sprites and a couple other minor things. Honestly not much has changed visually since last time, this is mostly a compatibility update, but it's done nonetheless

Please report any issues you may encounter, and as always, enjoy