by RailwAI
Adding tunnels in existing railway tracks still showed some bugs in a few test runs (always fun when functions do something else than expected), as in
the following image: 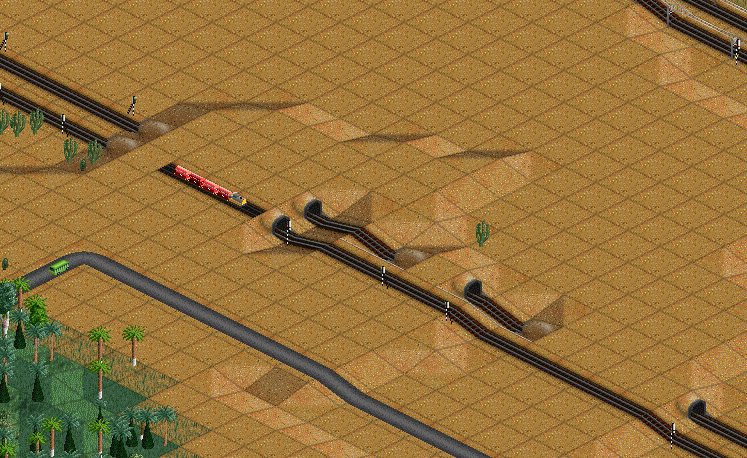 A changelog for version 9:
- Build signals around tunnels that were placed in an existing rail line
- Bugfix: verify if a tunnel will be built as the AI expects it to be built (expectations were sometimes wrong)
- Bugfix: A train stuck on a disconnected piece of rail will get a depot where it can be sold (might take a few years)

by nihues
Since V8, my savegame (and a new game) start with this error.

by RailwAI
Thanks for reporting. I'm really surprised by this error, but I could reproduce it easily when I download the AI through BaNaNaS and start RailwAI.
If I extract the .tar file that was downloaded by openTTD to the AI folder, RailwAI starts without any problem.

If I take a look at the .tar file, it seems that openTTD writes 3 bytes too much for the file shippathfinder.nut. Usually this wouldn't matter because of zero-padding in the tar-files, but in this case BaNaNaS generated no zero-padding here

I have opened an issue on GitHub about this bug in OpenTTD.

Luckily I'm not dumb and with a slightly different file length, BaNaNaS does more zero padding.

Changelog for version 11 (a lots of updates lately):
- Bugfix: verify if a train is in the way to build a tunnel properly
- Small changes in pathfinder for ships
- Slightly fewer buoys are used
- Workaround for a bug in OpenTTD that made this AI not downloadable through OpenTTD

by RailwAI
After a bit of development time in the last days (and a lot of testing time, mostly by running openttd in the background), version 12 is now available. I have implemented a small bit of strategy, with the goal of having more active train routes. Looking at the tests, it mainly goes at the cost of using less ships.

by RailwAI
A new year, so it's time for a new update. A few bugfixes, of which one was a major issue (concerning the finances): RailwAI loved to buy new road vehicles without giving them orders. Obviously, those vehicles were not really profitable.

The changelog for version 13:

by RailwAI
Thanks for mentioning! I will fix it in the next update

by xarick
Slice out of range

by RailwAI
Good finding again. I directly made a change to version 14 that I was uploading, so that is now version 15.

The changelog for version 15:

by Dr. B. Ching
I don't know which change did the trick, but RailwAI seems to be doing better on sparsely populated maps now. Older versions would sometimes just sit there and investigate idea after idea, yet never build anything worthwhile or fail to establish a single route even. Perhaps industries and towns being placed much further apart than usual in comparison to the default map generator was something they couldn't handle very well.

by RailwAI
The major improvement on sparse maps was probably a combination of changes in version 15, largest part probably done by the improvement in efficiency of evaluating ideas for a new railway line.

It has been a while, but again time for some improvements. The changelog for version 16:

by RailwAI
In the last weeks I spent some time to create version 17. Main goal was to increase the capitalistic performance (income and profit) of the company. The changelog: Then, I have a new screenshot for you: 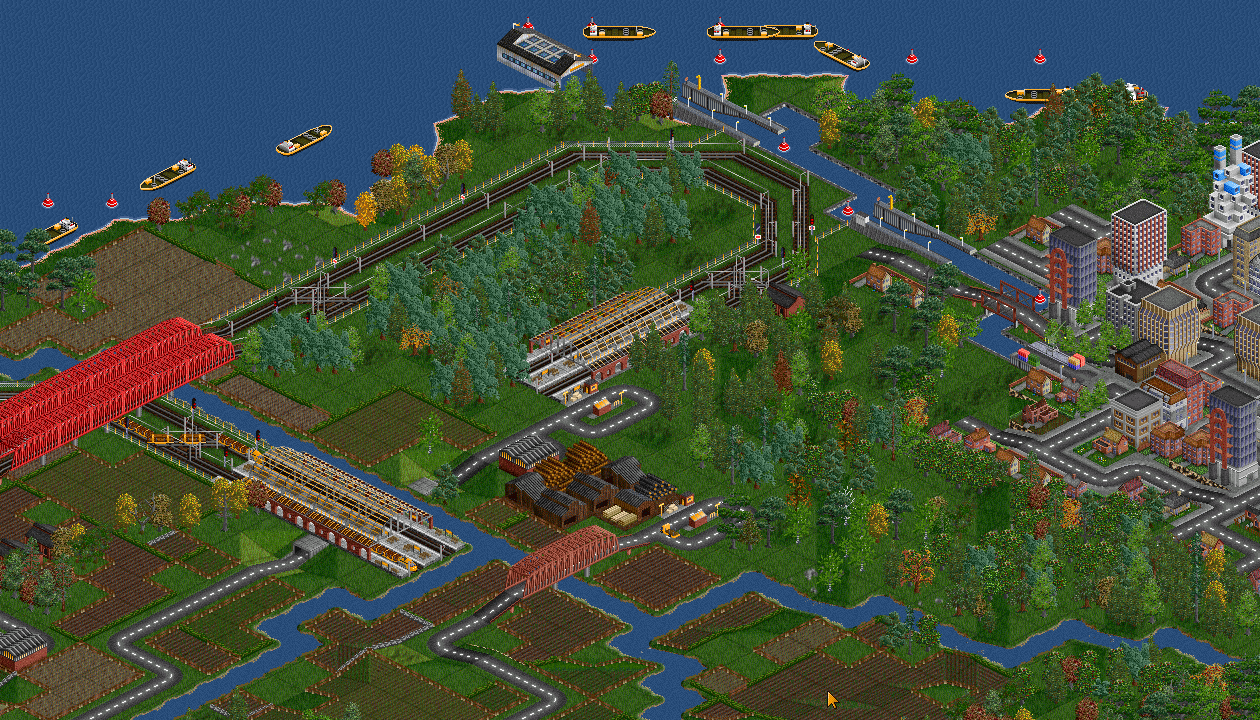 I have noticed 2 things in its behavior :
- It tends to scan the entire map quite frequently. I think it's limiting the expansion of the company.
=> Maybe you can reduce the frequency of the scan, to make the AI a bit more competitive ?
- Its engine choice is sometimes wierd : On a wood line, it runs 2 trains : 1 with a steam engine and some wood wagon, and another train with DMU only.
=> Maybe it should calculate, on a given train line, what configuration has the more cargo ?

These are only suggestions

by RailwAI
Hi, thanks for your feedback!
It looks like scanning the map indeed takes a lot of time on a large map. I used to test on much smaller maps, so I'll try to improve the performance on large maps in the next updates.
The usage of 2 different train types on a route is as intended: in my opinion it looks better with more different trains. Seemingly there was a DMU that can be used to transport wood. The length of a train might be short if the company didn't have enough money for a longer train yet. RailwAI should be able to adjust the train length after a while. Please let me know if it indeed increases the train length some day.

by RailwAI
Version 18 is now available, in which I changed the "complete map scanning" to a different method (start with locations of vehicles and stations, then find adjacent tiles). It is faster, as long as the company owns less than 20% of all tiles on the map.

I tested your AI in the same game I did previously. Overall performance is improved

But ...
After one year of existance, it seems to be stuck in a loop where it scans industries on the map ...

Here is a screen of what the debug menu says :


I can't link the save do to files reasons.

by RailwAI
What it doesn't tell, is that it has not enough money to start a new connection. It should break automatically after a while if the company is able to make money, or after 300 times. I'll add an additional check in the code

by RailwAI
A new version, number 19, is now available through BaNaNaS! I have had quite some spare time to let RailwAI play games, and I found some new (probably rare) bugs. Most could be fixed quickly.

by RailwAI
Version 20 is now published online. After the latest AI contest I made some changes based on what I saw using the similar config files. The coolest thing I saw in the contest, was my AI suddenly using airplanes: it had bought over the company of AdmiralAI when it went bankrupt. Then RailwAI went bankrupt too because of the really expensive airport maintenance costs

by sevenfm
Found two problems with this AI when tried it in my game (JGR 0.32):
1. It does not understand road types (I used rattroads) - it builds standard expensive road instead of cheapest, even though the fastest vehicle can run at 30 km/h at that time.
2. It builds intercity roads which can hardly pay for their maintenance at that time, instead of building local bus networks in big towns which could be very profitable and provide a cash for later expansion.
All times are UTC
Page 2 of 4
Powered by phpBB © 2000-2020 phpBB Limited