With expansion limit on, RailwAI doesn't want to become larger than other companies around. If you would join the game and build your own routes, it might expand again. It can sometimes occur that planes aren't used, depending on the shape of cities. It might decide later to start with planes, but it requires at least enough cash. Thanks for your bug reports, those will be solved in the next release (and I found 2 more bugs myself that were already longer present).
Top 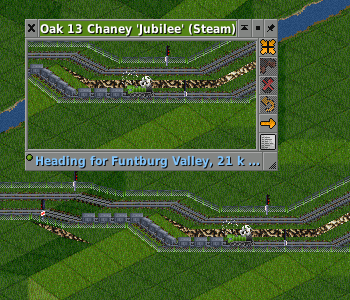 It was indeed confused by the fact that only some carriages and track types have speed limits. I have fixed some bugs and added more options to regulate the company expansion. Therefore version 25 (now available) should always work better than 24. The changelog: