Your issue has been fixed, thanks for the bug report.
Top

here is the nice list wtf coming from script when starting it from server exe.

also when loading a game with citybuilder mode and infinite timeline. it sets the city grow reqs totally off. for example my city which needed passangers and mail to grow now regs vehicles and petrol to grow. and target lines for next resource changes also.

I also don't know why it complains about using a <SKIP> command though. I thought it was supposed to be used to skip a parameter?

The openTTD string library seems to have 40 hidden/vaguely documented/undocumented caveats for every feature it has so let's just say I'm going to ask for some technical help in fixing this problem because I do not look forward to analyzing the entire string library code to find out what the caveat is...
Top

I also don't know why it complains about using a <SKIP> command though. I thought it was supposed to be used to skip a parameter?

The openTTD string library seems to have 40 hidden/vaguely documented/undocumented caveats for every feature it has so let's just say I'm going to ask for some technical help in fixing this problem because I do not look forward to analyzing the entire string library code to find out what the caveat is...


well there is some where a bug which causes it to load totally different settings when loading a save game. and those are just the thing i noticed when using openttd.exe in server mode (txt based).

Edit: Narrowed down the cause. those huge pile of "warning: string name ´STR_XXX" errors comes when loading the savegame. in regular new game process it only shows these errors in pic.

so the major cause is in those dutch files i guess. 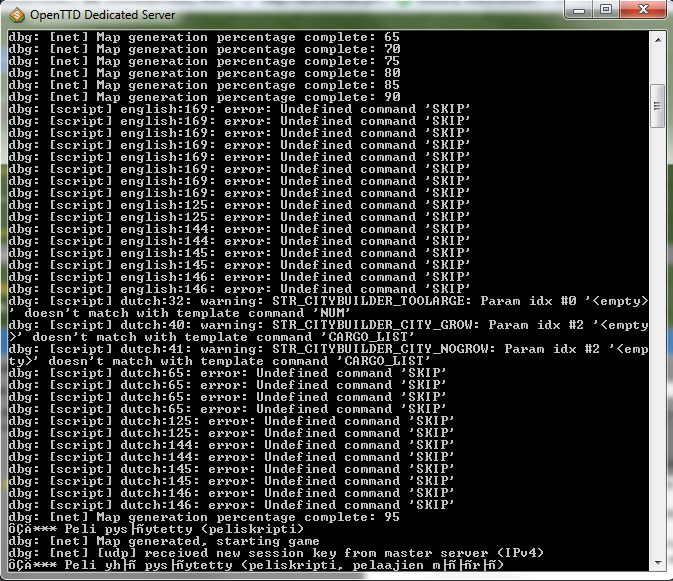 i have a little question, maybe it´s a stupid one but i don't know how to solve it.

when my city grows and i have to deliver more than 3 things, this happen!! i cant see properly the amounts that i deliver/need....

The citybuilder script does not declare the proper dependencies in bananas:

Maybe try to use musa (it's a python script allowing to upload content and easily defining dependencies: http://hg.openttd.org/openttd/extra/mus ... 054220a54d)

Regarding musa, I would suggest the forum thread as a starting point for getting familiar with it: http://www.tt-forums.net/viewtopic.php?f=29&t=63119
My OpenTTD contributions (AIs, Game Scripts, patches, OpenTTD Auto Updater, and some sprites)
Junctioneer (a traffic intersection simulator)
Top

hi all, i'm very bad in english so i make it short, i'm using the script citybuilder and i wana thank for it, i ever do this on my server when you visit me but i wana do it one more time so thanks^^ (now i'm gonna search Zuu post to thanks him for the nocargoal that i'm using too)

after hours of testing i'm back to the 81 release that work better for my setting, style of game and grf, sorry to disturb with this.
Top

any luck getting those dutch files fixed?
Top

The first thing, here is what happens:
I'm playing this GS with FIRS industry replacement set. When I set up a certain cargo to be required (set amount), and its waiving point (the population below which requirement is waived). The problem comes when reloading saved game. The problem is that after the game is loaded, the waiving is forgot by this GS, and this cargo appears in the required cargos list in town GUI. The want thing to keep in mind is that the cargo gets displayed after the next month/GS evaluation period, so fast forward to see it pop up.

This should be easy to reproduce. In my case I've tested it with cargo id no 25 (which is petro "PETR" in FIRS). I've set the cargo monthly req. per 1000 pop and set waiving to 5000. I've run the game and in cities below that pop. it wasn't required. After saving and reloading, there was "PETR" everywhere.

So this is the first issue. The second one is about the "PETR" kind of.

The problem is that towns and city guis dont display the requirement informations consistently. It looks like its broken in some cases - this is probably for the big cities (or "cities") but after disabling the cities from game in settings this applies to big towns.
The gui is displaying only the cargo's lablels (instead of its correct name) with the D/S/R shortcut. So there are shortcuts like "STEL", "PETR", "FOOD", "GOOD". So its rather "BAAD"

. I could post a screenshot here but I guess you know what I mean.

That's it. Sorry for being verbose but I wanted the issue to be clear.

For the forgot settings issue I've found the solution.

So the problem is that settings are forgot by the next load of a savegame. But it happens "info.nut" file is using "flag" variables set to 0 in the AddSetting() call. It looks like not a valid value and such, the GS engine cant deal with it. It must be set to one of the GSConfigFlags enum values:
http://nogo.openttd.org/api/1.3.2/class ... 5d1979c79d

EDIT: This is all pontless, because cities dont grow at all after reload.
Top

lukasz1985 wrote:But it happens "info.nut" file is using "flag" variables set to 0 in the AddSetting() call. It looks like not a valid value and such, the GS engine cant deal with it.

As long as CONFIG_NONE = 0 there's no issue there.
Top

So it is not, because I've run into this issue, when the flag was 0.
Top

Next release (r88) is going to require OpenTTD 1.4.
It needs some new things from the 1.4 API, most importantly using TOWN_GROWTH_NONE.
You can already download it from bananas if you have a recent enough nightly build.

Note: there's two strings remaining in the dutch language file that servers will still complain about. They are currently unused so the warning messages are safe to ignore.
Top

Most people - rightfully - play usually with the latest stable release of OpenTTD. But of course there are the daily snapshots from our development branch - called nightlies - which will eventually lead to OpenTTD 1.4: http://wiki.openttd.org/Nightly
Nightly builds are for those who like to give the bleeding edge development versions a shot.

oki thanks, i know the nightly and ever try it, i don't know that was also named 1.4^^
Top

In upcomming Neighbours are importent I will use this wrapper to disable town growth:

Using this code, 1.3 will still be supported with the caveat that town growth will not be completely stopped but set to every 43 years for users of 1.3.
My OpenTTD contributions (AIs, Game Scripts, patches, OpenTTD Auto Updater, and some sprites)
Junctioneer (a traffic intersection simulator)
Top

Even when you request translations, this is an English forum. Henceforth please use English to communicate here.

For game scripts you unpack the tar you got and then create a new translation file in the lang folder with the appropriate header. See eints documentation for introduction to lang files