It challenges every company to turn a specific town into a global production centre for a specialised cargo.

Every company is assigned a slightly different goal, but they all have the same time period to archieve their goal.

To achieve the goal, the companies do not only have to transport lots of cargo to and from their town, they also have to fund sufficient industries to produce the cargo.

Download: Via BaNaNaS, or via project page.
Project page: http://dev.openttdcoop.org/projects/siliconvalley 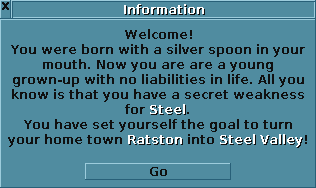 How to install where should I put this files?
Top

Anderwin wrote:How to install where should I put this files?

Obtain a very recent nightly version of OTTD, head to the in-game "Check Online Content" tool and locate this under the "Game scripts" type (or type "Silicon Valley" into the Tag/name filter box). Download it and then exit back to the main menu, click "AI/Game Script Settings", under Game Script click the "(none)" and the below that click "Select Game Script". Choose Silicon valley, Accept, and then start a new game.

Phew, that's quite a bit, hope you can follow it.

Terribly sorry for bump this topic but I have a problem with this GS. apparently This game script isnt compatible with later revisions of Super lib. and throws a compatibility error. I grabbed the correct revision from the archives but it isnt listed in bananas. is it possible to upgrade this GS to make it work with later version of Super-lib?

While it is possible that frosch123 update Silicon Valley to SuperLib 36 (currently last version), there will for sure be a version 37 at some point. When that SuperLib is released you will have this problem again. The reason is that scripts import a specific library version. If not exactly that version can be found by OpenTTD, it will fail. No matter if the GS may work with an older/newer version or not.

If you download Silicon Valley using in-game content download, it should automatically also download the correct SuperLib version set as dependency by frosch123 when he uploaded Silicon Valley to bananas.openttd.org. You can then copy SuperLib from your client to your server if you can't use online content on your dedicated server.

I just tried to run this and encountered the same problem. It seems it needs Superlib 25, but I can't find it in bananas...
Melt with the Shadows,
Embrace your destiny...
Top

My understanding is that since SuperLib 26 is on Bananas and is the most recent version. You can not ask Bananas for version 25 of SuperLib. To get version 25 you need to download a script that has a dependency on version 25 which Silicon Valley should be doing by the sounds of things.
Formerly known as r0b0t_b0y2003, robotboy, roboboy and beclawat. The best place to get the most recent nightly builds of TTDPatch is: http://roboboy.users.tt-forums.net/TTDPatch/nightlies/
Top

The problem then is possibly that Silicon Valley doesn't declare any dependency on SuperLib in bananas.
Melt with the Shadows,
Embrace your destiny...
Top

Hi, I just edited the main.nut from the silicon valley tar and changed line 23 from

into a superlib later 25 which i have installed:

and it seems to work now... No error so far. But i don't now the differences between the superlibs... Maybe something is missing later.

I'm the main author of SuperLib and from what I can recall there are very few breaking changes in the history. The only one would be related to bug fixes and migrating from Road path finder 3 to version 4. But I find it unlikely that Silicon Valley use the road path finder in SuperLib.

If you want to look into the details you can read the commit log of SuperLib here: http://dev.openttdcoop.org/projects/superlib/repository
My OpenTTD contributions (AIs, Game Scripts, patches, OpenTTD Auto Updater, and some sprites)
Junctioneer (a traffic intersection simulator)
Top

I uploaded a new version to BaNaNaS. The SuperLib dependency should now work (again?).

Thanks!
Melt with the Shadows,
Embrace your destiny...
Top

Loving this game script, so glad this and NoCarGoal exsist!

However having a quick play through, there are a few requests I would like to see in an update for this, if you plan on updating it further...
Would be great to hear from you on my thoughts!

From looking at it, it look like you don't actually get a cookie either as I've definitely collected 3,000 steel now over six quarters, unless I would need to have delivered 3,000 in one quarter?!

Also I posted before, and it said it needed to be moderated?

About the cost for funding industries, you can use the "Base cost mod" NewGRF to adjust them.

Wrt. the goals for different companies: If there would be a new version, I would likely remove the option to play with anything other but "secondary" industries. The primary industries case does not work particulary well, since you mostly have to fund industries instead of transporting stuff. And well, the case "primary and secondary" is completely broken, since the goal cargo amounts are not comparable at all. Anyway, maybe I can figure out a method to distinguish secondary and tertiary cargos.

About the starting amount of industries: Does that really matter so much? In Silicon Valley you do not have to start early with the goals. You can very well make 5 years only money with completely different things, and then complete the goal within a quarter (if you build fast enough). The cargo amounts transported are not accumulated as in NoCarGoal. Only one quarter matters. Basically, rush for money, not for the goal

Story book would be a nice thing, but you can already now see the amounts of competitors by opening their goal windows. Hold the mouse button on the goal menu for that: It's the same as for the other menus.
⢇⡸⢸⠢⡇⡇⢎⡁⢎⡱⢸⡱⢸⣭⠀⢸⢜⢸⢸⣀⢸⣀⢸⣭⢸⡱⠀⢰⠭⡆⣫⠰⣉⢸⢸⠀⢰⠭⡆⡯⡆⢹⠁⠀⢐⠰⡁
Top

Regarding number of industries, it is nowdays possible for GS to build industries. So Silicon Valley could use that to level out the amount of goal industries already in the company towns. Though it may be easier if the GS could just demolish industries from towns that has to many rather than adding up to towns that has to few. (but IIRC the demolish command is not available to GS)
My OpenTTD contributions (AIs, Game Scripts, patches, OpenTTD Auto Updater, and some sprites)
Junctioneer (a traffic intersection simulator)
Top