Cool that you're thinking about adding this in

I have a feeling one-way bits on every other grid would be best, as then it would be impossible for any vehicle to drive on the wrong side of the road, while keeping the ability to build intersections:

Also one-way bits at both ends of any bridge or tunnel so they can't be used to go the wrong way either.


Ownership of the roads isn't that big of a problem for me, as I start my games from 1885. So the WmDOT builds a few roads, goes bankrupt, and then starts up again

):
- Only allow a limited amount of turns for motorways, maybe max 2-4. This makes them both faster to travel on & look more... dominating I guess.
- Don't make them go directly from city to city, but rather start & end just outside of a city, with a road into the city:

These could then be expanded further to longer and longer distances.
Top

In what is likely to be the last release of 2012

WmDOT has been updated. There are three major updates: 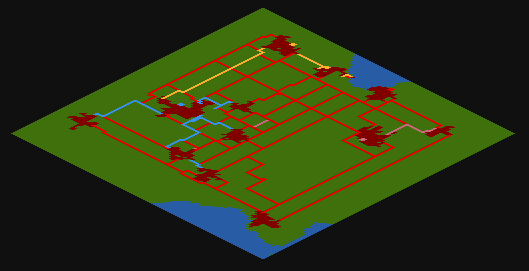 As always, please report bugs and other strange behaviour here.

Update: Version 11.1 has been uploaded to fix a typo.

As a side, it's amazingly gratifying to see the uptake WmDOT has seen. I have no way of knowing exactly how many people play it, but WmDOT (in all it's versions) has been downloaded over 100,000 times!!

I let wmDOT run in fast forward in the background with lots of money to see what it could accomplish. However, at some point the script crashed. (I don't know when that happened, only that the script ran for maybe 10 or 20 years from 1950 to 1960-1970-ish. From that to 2050 it have been running without supervision.)

Aditionally, I've highlighted in the first screenshot a situation where the AI seem to have failed. I beleive there was an industry there before which was the reason it was not able to go straight. However, if you look at the lower left of the circle, the slope of the hill seem to have prevented the script from connecting the two sides of the highway. So the highway was left a bit unconnected. Maybe that is a consequence of the grid system that is hard to do anything about?

Earlier part of the error:

Thanks for the report Zuu.

Yes, the two unconnected sides of the highway are due to the slope and trying to connect only at grid points. WmDOT is smart enough not to turn the two roads into one way if they can't be connected, but maybe I should move that check up and not built the second road if the two sides can't be connected... I'll give it some thought. If you see any other funny road connections and have a suggestion on how it should look, let me know.

The crash is actually a result of a bug in the ship pathfinder, which will take longer to root out. My guess is that it eventually timed out (it had been running for ~50 years) but it still didn't have a working path and so broke the AI. Fixing the ship pathfinder is high on my list of things to do, but surprisingly complicated.

And thanks again for your SuperLib!
Alberta Town Names - 1500+ real names from 'Acme' to 'Zama City'
MinchinWeb's Random Town Name Generator - providing 2 million plus names...
WmDOT v13 - An AI that doubles as your highway department
Top

Error. It was trying to do something with Docks, but failed. 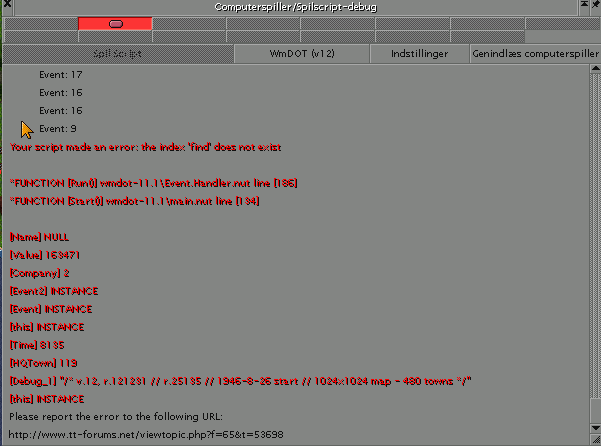 your AI runs first good and make good progress in conecting towns ... but then it crashes again and again with the same error ...
Picture from error and save game added...
I play HardGame version (actual) and many NewGFXs ...

I recently started playing OTTD again, and on some suggestions got hold of GRF's and AI etc...

I am currently having a problem with wmDOT though :/

I have attached the crash report to this post. Any help would be great

If yes: then the BaNaNaS entry is missing correct dependency declaration. You can obtain version 2 of Queue.FibonacciHeap here: Queue.FibonacciHeap-2.tar.gz and manually put it in [OpenTTD]/ai/library/ (where [OpenTTD] is Documents\OpenTTD on windows or ~/.openttd in Linux)
If no: then download WmDOT with the in-game downloader so that you get all depnedency automatically. (or follow the "if yes" path above to obtain it manually)
My OpenTTD contributions (AIs, Game Scripts, patches, OpenTTD Auto Updater, and some sprites)
Junctioneer (a traffic intersection simulator)
Top

Ok, got that error out of the way, now I have a new one

OmagaIII wrote:Ok, got that error out of the way, now I have a new one

That will be very hard to follow-up for the author. If you look closely at your screenshot, you'll notice that the first line(s) of the error output are all truncated. But they contain the crucial information as to where the error occured. It will be much helpful, if you could produce (next time) more screenshots by scrolling the output so that the complete error output is visible.

Thank you for your quick response, Zuu and Planetmaker.

OmagaIII: What Planetmaker says is true: without all of the error output, it is hard for me to know exactly what went wrong. I can guess that what's happened is that WmDOT tried to water path, timed out, and crashed, however. I have a few ideas on what to do about this, but have struggled to fix this. Do you have a copy of this game that you could upload to the Forums here so I can see the map and confirm my suspicions?
Alberta Town Names - 1500+ real names from 'Acme' to 'Zama City'
MinchinWeb's Random Town Name Generator - providing 2 million plus names...
WmDOT v13 - An AI that doubles as your highway department
Top

Any idea why WmDOT would build dual carriageways like this? 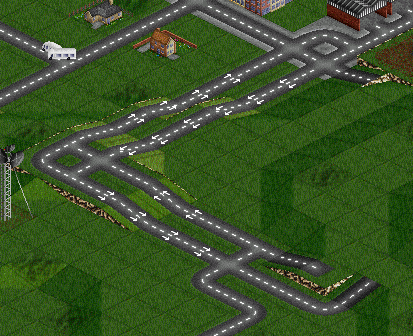 kamnet wrote:Any idea why WmDOT would build dual carriageways like this?

The way WmDOT builds freeways (or dual carriageways, if you prefer) is it connects dots on an 8x8 grid. This reduces the clutter that long running WmDOT's were causing in earlier versions, but occasionally leaves odd stub ends like the one above. Depending on the town locations on the map, WmDOT might later extend the Freeway past this stub end.
Alberta Town Names - 1500+ real names from 'Acme' to 'Zama City'
MinchinWeb's Random Town Name Generator - providing 2 million plus names...
WmDOT v13 - An AI that doubles as your highway department
Top

Sorry if I wasn't more clear, look at how the one-way roads are laid out.
Do you like drones, quadcopters & flying toys? Check out Drone Strike Force!

kamnet wrote:look at how the one-way roads are laid out.

Well, if I guess wrong, tell me what you think is strange about it, and I'll try again.

The fact that there is a non-one way tile at the end of some (but not all) of the freeway links is due to the way that the AI can make one way roads: it must draw the 'one-way-ness' from one tile to an adjacent tile. (Unlike a human player that can draw one-way-ness on only one tile at a time if he wishes.) If both tiles can become one-way, then it works. If one tile can't become one-way, the process fails for both tiles. As well, the process doesn't 'make' a tile one-way, it just flips whether it is or not. WmDOT 'draws' one-way-ness down the full length of the freeway, one tile pair at a time, and you can see the result. This works well enough, in my opinion, to provide one-way-ness without having to explicitly deal with every crossroad and T-ing possibility, while preventing vehicles from going down the 'wrong side' of the freeway.

As for the fact that right/left orientation isn't maintained, it's because of the numbered tile grid: the one way road going 'up' the grid (i.e. the tile reference is getting smaller) is always the 'upper' row of the two freeway links.
Alberta Town Names - 1500+ real names from 'Acme' to 'Zama City'
MinchinWeb's Random Town Name Generator - providing 2 million plus names...
WmDOT v13 - An AI that doubles as your highway department
Top

What I think Kemnet refers to is the fact that some parts of the dual carriageway are left-hand-side, and other parts are right-hand-side. That falls odd for me too. I have seen it a few times but always dismissed it as different AIs.
Skippern
OpenTTD Mac user
Top

skippern wrote:What I think Kemnet refers to is the fact that some parts of the dual carriageway are left-hand-side, and other parts are right-hand-side. That falls odd for me too. I have seen it a few times but always dismissed it as different AIs.

Bingo, this be the one. I would think that maintaining one-way direction would be dependent on whether the player has set driving to the left- or right-side. You don't normally come to an intersection on a highway where the flow of traffic cris-crosses.

(Well, I take that back. You do find it on the diverging diamond interchange, but since OpenTTD cannot implement such designs, this is indeed bizarre to me.)
Do you like drones, quadcopters & flying toys? Check out Drone Strike Force!

Version 13 of WmDOT is released! This fixes two bugs that were reported: This release also aims to speed up the Ship Pathfinder.