by Hephi
Introducing MailAI, an openTTD AI that transports all your love letters and court orders with trucks and trains!

by Zuu
If you select a pre-defined license on bananas, you must not include any license file in your tar file that you upload. (in case you tried to upload the exact same tar-file as you have uploaded to the forums)

by Lord Aro
Excellent! I have been watching MailAI for a while

It will be much easier to debug if you, for example, base the coding style on the wiki page: http://wiki.openttd.org/Coding_Style


About the bananas: openTTD accepts 'false' tar files made with winRAR and can read them perfectly, Bananas wants 'real' TAR files so I needed to make it with another archive program (7-zip)

by Yexo
I was just reading some of your code and have a few comments;


I haven't played with your AI yet, but I'll definitely be giving it a try.

by Hephi
I didn't notice the difference bewteen cargoclass and cargo id. How can I know what cargo id to use then? I don't see a list on the NoAI API.

I know about the rail problem but as long as there's no better way of detecting the rail types this will have to work.

by Yexo
You already have the code for that:

by Hephi
aha! I remember... thanks. I'll fix that on the next occasion. 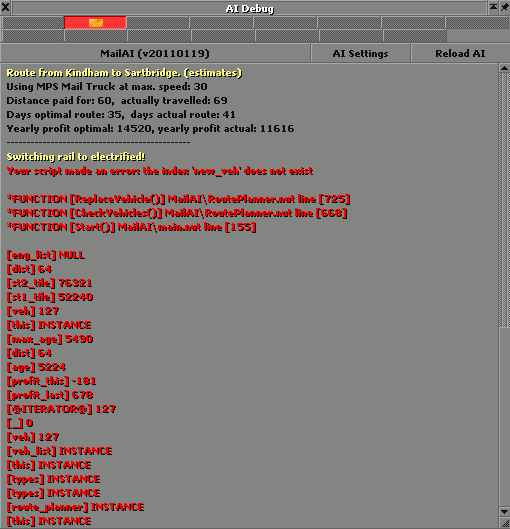 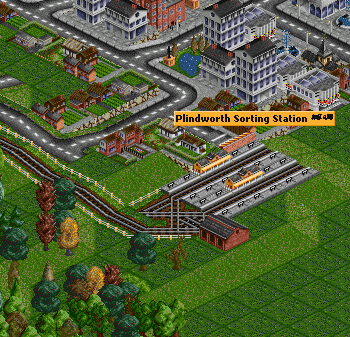 by Brumi
I'm testing the new version. No crash or misplaced rail station this time

by Hephi
I forgot to adjust version number

On openttdcoop there's a new version if you're interested, ran out of time to tar it and upload it here.
21/01/2011
- IMPROVE Handling objects in the way of the railpathfinder. (crossing roads and rails)
- IMPROVE Correctly detecting bridges in BuildPassings so trackwalker can continue.
- IMPROVE Rewrote code that builds the switch in front of the station, now also chooses best side. (Brumi)
- FIX Typo in BuildRailStation that led to leaving (yet another) tile undestroyed when cleaning up station.
- BUGFIX Switchlocation finder handled coast tiles wrong.
- BUGFIX Sold vehicle before orders where copied resulting in empty order list.
- BUGFIX When selling wagons it was possible for the train to end up stopped at the depot.
- BUGFIX when it couldn't move wagons (Brumi)

by Zuu
If you have a recent nightly or 1.1 beta you can click on the NewGRF button on the load game dialog and then find on online content.

by Zuu
In bananas, I have noticed that you have set the url to:


It's somewhere in the fine print that this AI needs 90° turns enabled. Normally 90° degree turns should only exist in
a rare occasion on station exit and with some depots. Sorry for the inconvenience.