Found and fixed. Thanks! I guess I will have to release a bugfix release soon now

Now that I've had a bit of holidays: a bugfix release in bananas! Nothing new, just bug fixes to the bugs reported here. Thanks all for the feedback and reporting of those bugs!
OtviAI
Rondje om de kerk (AI)

Don't belittlet that, it's IMHO not less important; actually it's even more important and valuable as only that ensures a good gaming experience. Many features are no fun, if they're unusable due to crashes... Thumbs up and thanks for your nice AI and keeping it updated

When using OtviAI version 383 and the 2CC train set 2.0 beta 3 (plus chimaera addon and subway set)

It seems to have problems adding wagons to the created engine. The ERR_UNKNOWN are probably GRF errors
trying to attach the 'multiple unit wagon' to an engine that does not support it. Resulting in a train with no
wagons being build. (having the same problem when testing my own AI with 2CC and don't know an easy fix though)

Same problem as Hephi has i have here. 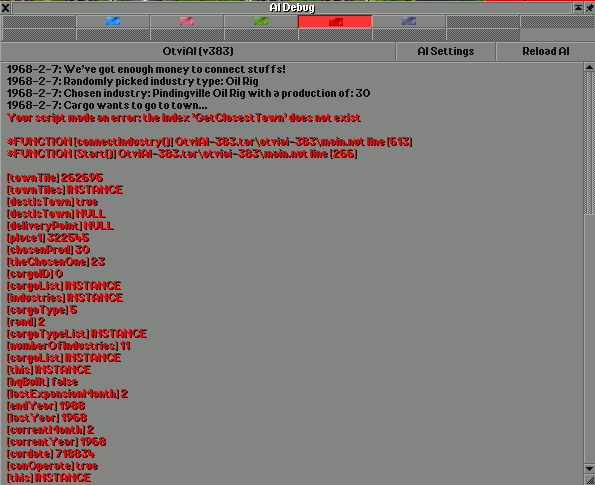 That problem as mentioned in the posting above seems to happen more often. It just occured here, too.

I think I know what the problem is; should have some time during eastern etc. to fix that

Maninthebox wrote:I think I know what the problem is; should have some time during eastern etc. to fix that

sounds good. I shall be looking forward to it

As promised: the Eastern edition is out

The accidental easter egg also known as bug got removed. The bug was in the handling of passengers from oil rigs, so you only notice it in long temperate climate games and then only sometimes. I also made the TODO list longer with things I think I should improve and/or add

As usual: it can be found in bananas and in the first post in this thread.
OtviAI
Rondje om de kerk (AI)

Glad that you have taken your time to fix this stability issue with Otvi as it is a really good AI.
My OpenTTD contributions (AIs, Game Scripts, patches, OpenTTD Auto Updater, and some sprites)
Junctioneer (a traffic intersection simulator)
Top

Doh! There was some test code left behind in the uploaded version 395, so it was only building cargo routes and neglecting all passengers and mail. If you got version 395: it's time to update again

'nother bug, this time with version 396

Ehm... I see I'm a bit late with fixing this bug

I remember having looked at the bug before. About 10 minutes before I went to a blind date with my now girlfriend and somehow forgot about the bug

After testing yesterday's version, I quickly noticed two bugs that have been in there for a while already I think:
1 fix: don't build the same industry route twice
2 fix: don't mix up town and industry indexes

Version 398 fixes these and should improve performance

Planning a route over a distance of 600 because you used a town index in the industry lists hurts a lot...
OtviAI
Rondje om de kerk (AI)

Maybe it was fixed, but Otviai 396 creates giant traffic jam: example. Save available on request.

That looks like what I fixed in 397: I accidentally built the same industry route a few times as you can see in your picture: there's multiple stations around the oil well and OtviAI is in heavy competition with eh... itself