I tried running PathZilla v6 on OpenTTD and I got showed this error report :/ 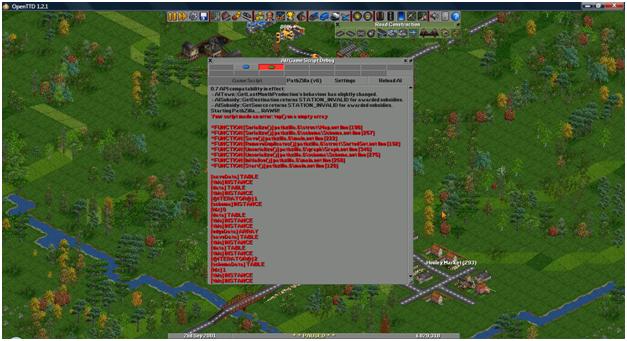 what does this mean?
Top

Please attach the full scale image and not a downscaled version. With this one is very hard to read the text in the AI Debug window that shows on the screen. Without that information it is very hard for the Zutty to solve the error.
My OpenTTD contributions (AIs, Game Scripts, patches, OpenTTD Auto Updater, and some sprites)
Junctioneer (a traffic intersection simulator)
Top

I've been running Pathzilla v6.
I've started a game and when the AI started all was good.
I saved and switched off.

After loading the saved game, I got the following crash

I decided to write a bugfixed PathZilla AI, because I can't watch this guys posting always the same error messages in this thread.
All should be as always, just without the old bugs. (The bugs are getting old, we need new bugs

The only thing which was changed is, that PathZilla can't build such extreme big networks as before, because this would cause the "AI took too long to save" error. But I made a new setting where you can change it to the same value as the original PathZilla v. 6, if don't need to save your game.

The biggest problem was the error "top on an empty array" when loading a savegame, but I copied the code from RoadRunner here.
I looked on the other bugs which were reported here and hopefully I successfully fixed it:

You should be able to load your game with bugfixed PathZilla, even when you get the "top on an empty array" with the old PathZilla.

I think it's ok to fix bugs in someone's else AI, because Zutty always said he hasn't time to do it himself.

An old quote written by Zutty:

Im REALLY sorry guys. I still want to work on this and PathZilla v6 has been "nearly ready" for months now, but every time I think I'm close to a relase I find some more bugs and just go round in circles. At the moment save/load is broken as I cant serialise a reference to an object.

I had a couple of weeks off in April when I thought this would get done, but thats long gone now and at the moment I need to work on my dissertation. Also the Sniper vs Spy update for Team Fortress 2 has really eaten up some time!

It may be a while until I get around to a new release TBH.

If you want to use PathZilla as the basis for a new AI, or just use bits of it then please feel free. I would be perfectly happy about that. Its all licensed under the GPL. The latest (unreleased) code is available online at...

It would be nice if someone could get use out of the ideas I had.

He finally finished version 6 some months after this post, but this is about 3 years ago now.
I hope and think that he isn't inactive forever, but who knows it.
I think the interest in such a project is always there, even if you're interested in it again after some years.

Hi, this was my solution for "top of empty array" error:
(line 197 of original code)

I will try the bugfixed now...

1) Edit the part of code in the AI that sets the company name, should be fairly simple as just removing it will revert to default names, just like for human players. In a running game you can use the cheats (Ctrl + Alt + C) to switch to that company and rename it.
2) There are console commands you can start/stop AIs with in a running game.
Top

I too have encountered problems with this AI.

and this 1 is a separate issue

pathZilla3.png
(6.27 MiB) Not downloaded yet