My wife, who is Norwegian, recently got hooked on OpenTTD... man I love that woman

. I thought it would be fun to play a map of Norway, but unfortunately I could only find a heightmap of West Norway. I wanted a larger piece of Norway on the map with a more recognisable coastline, and of course cities, lakes etc. So I went down the scenario creation rabbit hole, spent way too many hours on it, and this is what I have so far: 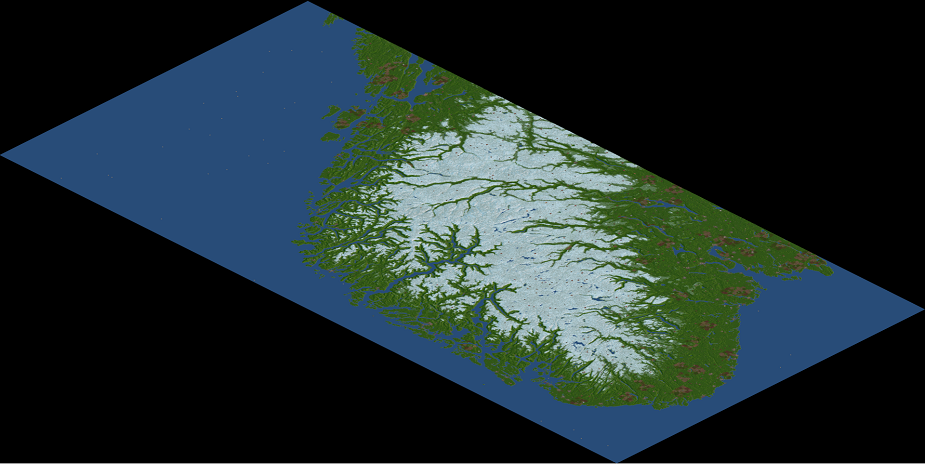 I'm really glad I learned Norwegian, it would have been impossible to find some of this data in English

I still have the following things in mind: This is my first scenario, so any feedback is more than welcome! Don't hold back, I can take criticism

. Please keep in mind that I want to do as little manual work as possible, scripting is the way to go for me

I've been playing this map with a friend and really enjoying it.
A couple comments starting with the smaller stuff:
-There are a few places where small towns and larger towns seems to have been switched, a couple I remember on the top of my head because I'm familiar with the area like Lommedalen (Pop 11k) seems massive relative to Oslo while Sandvika (Pop 120k) is completely missing. Similarly the map has Blakstad (pop 3k) but not Asker (pop 60k).
-The inland has some mysterious large towns: Arna and Grønlund, as far as I can tell Arna should probably be Atna (Arna is a borough in Bergen which probably is where it got its population from) but I'm stumped on Grønlund.
-This is mostly cosmetic but adding signs for landmarks could be nice like for example Mjøsa (largest lake), Galdhøpiggen (tallest mountain), Sognefjorden (longest fjord).
Glomma, the longest river, isn't wide enough to be 1 square of water at this scale but it is kind of weird that it's missing, though you can kinda tell where it is just from looking at the height maps.
-Some significant/historical towns like Røros, Kongsvinger and Elverum are missing because they'd be just on the edge of the map (or just outside it), I'd suggest including a little bit more east but you say you want to focus on the Oslo-Bergen-Trondheim triangle so if you think this is outside the scope of your map then I understand.

In anycase this seems like the most detailed Norway map in terms of terrain that I've found so thanks for that.
Top
Post Reply
3 posts • Page 1 of 1