Very nice! Looking forward to play this!
Very much a retired regular poster..... If you can say that

Now a moderator for a full time streamer. PM me for details.
Life is like cheese, you mature with age but don't necessarily get any sweeter

me & Romazoon epicly played the 2.0 version, still playing it right now, cant wait for you to do more of the regional travel guides!
Screenshots topic
Scenarios&Heightmaps
Top

Whopper wrote:Nice to hear that you are playing along with the 'story'

. Would love to see some screenshots of each different country with it's own transport company when you're done! 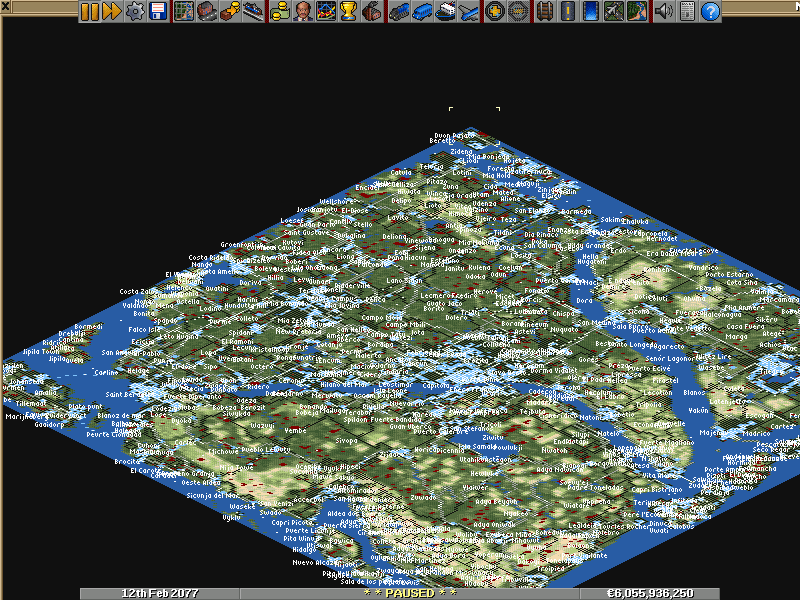 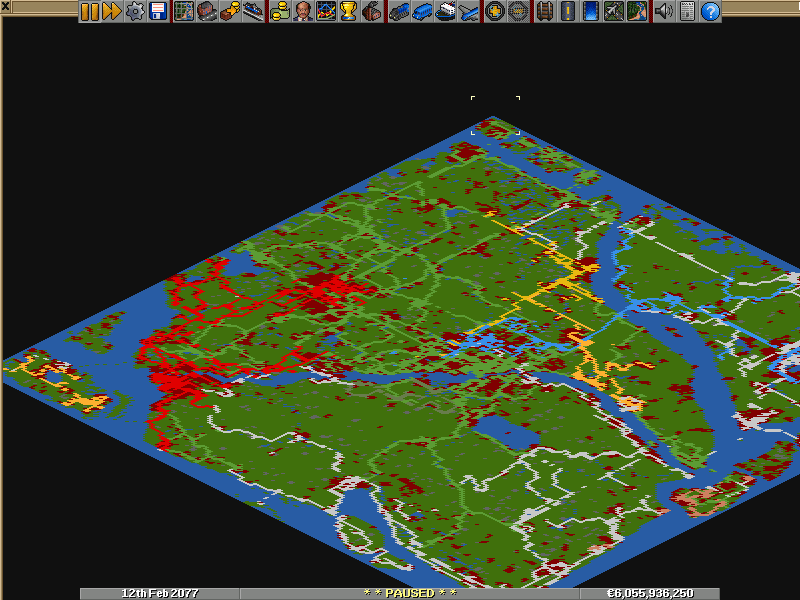 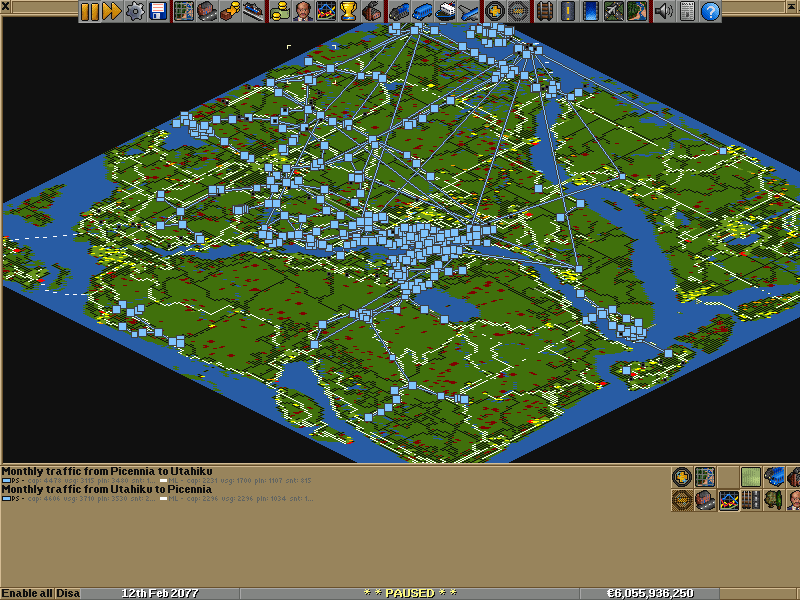 i wanted to upload the savegame but it is simply to huge to share. if you have the Chrill Patchpack then i do want to show you the outcome of our game, as it is quite interesting to see what industries and extra towns we placed to make the map playable and more interesting. if you dont mind i even have a few suggestions for v4.0 or 3.5, but i will fist have to play the 3.0 map or at least have a decent look at it.

due to the map being played by Romazoon (green) myself (white) and i believe EXT (red) we had 3-4 companies that started on different points in the map. by creating spiderweb networks we eventually ended up with a huge networked map, that still is extremely interesting to play, by connecting everything we can. the different networking styles and realistic gameplay loving players lead to a very balanced game, without destroying to much of the cities. as i mentioned, we did "customize" it a bit, by adding NewGRF's and placing some towns/industries to our likings, but i honestly think you should have a look at it

Nice to see most of the continent connected

, only the south is still left out, am I right?
I've also seen the shots in Ramazoon's picdump, you two (and the others) have certainly done a nice job.

That game was really fun to play. The only reason I stopped was my internet was to too slow to connect near the end. Looking forward to an updated patchpack so v3 can be played. Easily my favourite OTTD map out there. Thank you for so many hours of great gameplay!

yeah the middle left actually has been connected as well, one of the final projects todo actually. i might help you out on some idea's and suggestions for 3.0, im also gonna start up my own map-project sooner or later again, i just have to get some good idea's on cityscaping and a climate i want to work in (most likely im going for an arctic setup, as i like mountainranges but then having realistic sized cities & distances like cindini has is not going to be easy.

really great map to play on, but i will comment some suggestions a bit later for 4.0, its been a while that i commented on it, last time was on the pre 1.0 stuff if you remember that?\

it so nice with the desert and the somewhat lake i have on it, but your version of it is more or less wtf....

(EDIT: its 2 tiles that block the whole s*** from flooding, fix those 2 tiles and its way better)

still not sure how much i like the new extra L bend of that river though...


similar issues for the Endirez Water Reserve and the Roderez Water Reserve. i really liked that whole river/water flowing to the sea there. i understand you want to make the desert more try, but i think the change of small bit of water was not that bad. maybe introduce a canal via locks there, with some "green" edges on the " man-made" canal?

similar issues with some other spots. some of your town-extensions make sense, others do a bit less, ill send you a modified version by myself soon so you can see my changes (typing/screenshots sometimes are too much hassle, seeing what i mean is way more insightfull
Screenshots topic
Scenarios&Heightmaps
Top

here the screens of my suggestions for some water-letins (mainly breaking out the weird holdback tiles that where there in 2.0 as well) 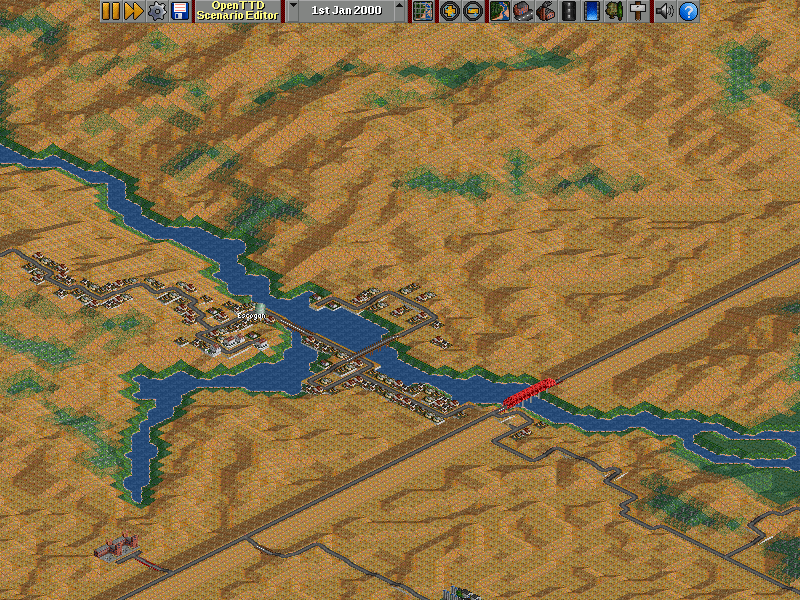 2) the lake lattenjetto in the real form 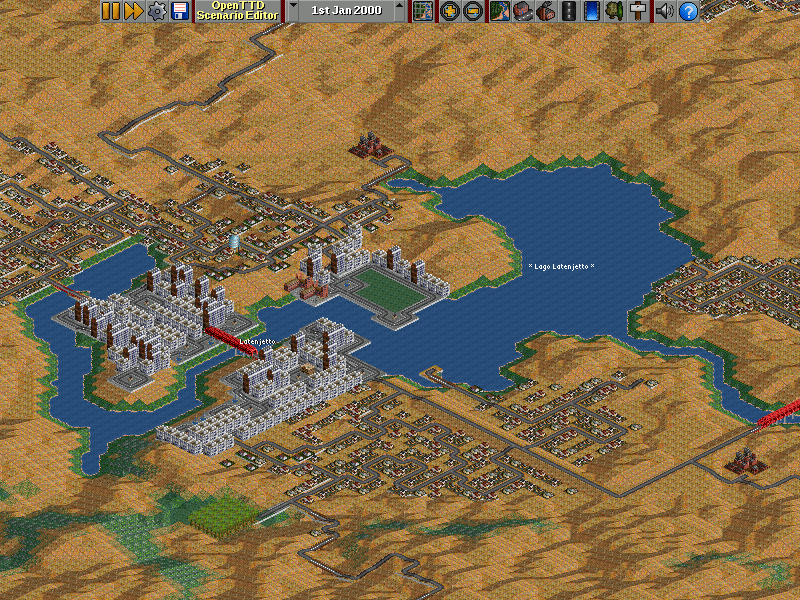 3) my version of this lovely town/city
optional is a combination of shot 2 and 3, first flooding the area, then adding 2 dams for lower & upper.... 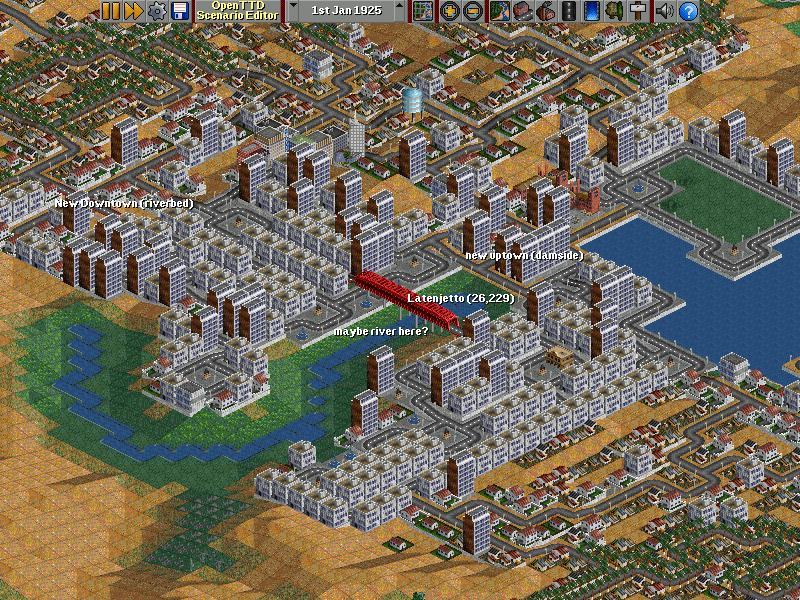 then i also noticed the 2 pumpstations near tilegro and modified it slightly to the following outcomes:

Tilegro is a good city, but on the Bogota dike side, i made some changements see below
1) New industrial area on the city edge, including a harbor

2) Watersupply on the southend of the lake, on the poor kid side 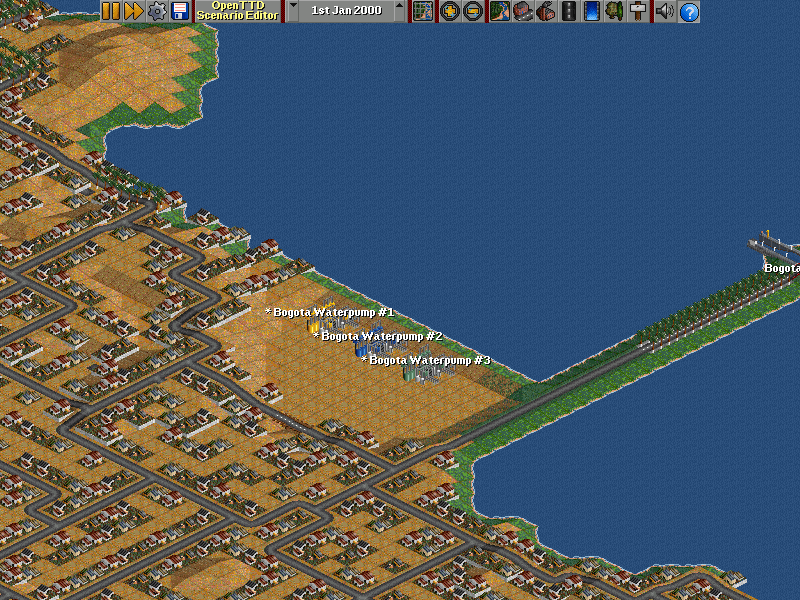 3) general view of the changes, the dike became a dam with locks to allow ships passing it, the south end got watersupplys, the west end got industrial zone and the north end has received a parkside to match the rest of the city a bit more
note that this did remove the original dryland/wetland marks, that looked a bit odd to me 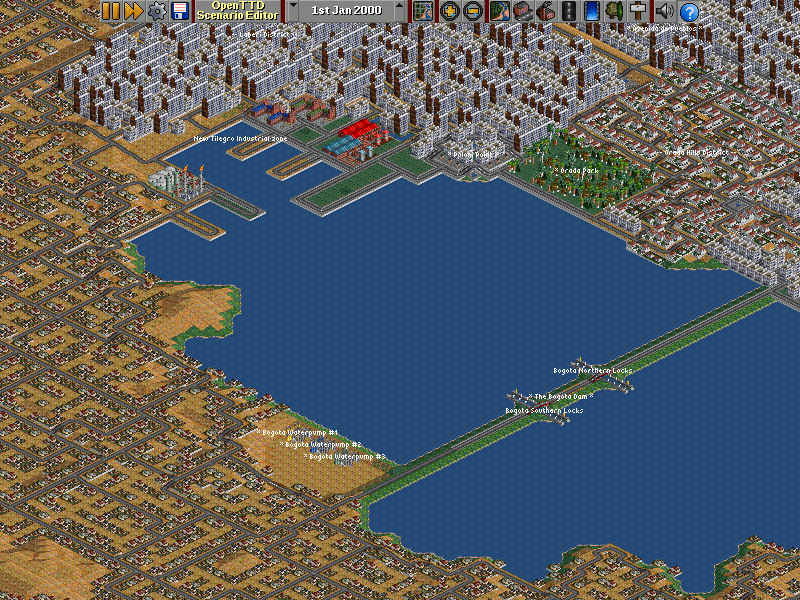 Also nice to see Cindini in a completely different buildingset.

This scenario is the most epic one! Once I learn to apply a patch, I will certainly play it. This map is great for infrastructure sharing and singals on bridges and in tunnels!
Here, take a look a my screenshot thread: http://www.tt-forums.net/viewtopic.php?f=47&t=59701
Top

Also nice to see Cindini in a completely different buildingset.

yeah the swedish houses do remarkably well in teh tropics as well...

Klaasgras wrote:This scenario is the most epic one! Once I learn to apply a patch, I will certainly play it. This map is great for infrastructure sharing and singals on bridges and in tunnels!

there is a pre-made patchpack from Chrill, just download and play!
Screenshots topic
Scenarios&Heightmaps
Top

In addition a new small update has been uploaded for Cindini at Bananas (v 3.002)
Check it out here: http://bananas.openttd.org/en/

Whopper wrote:The travelguide on the first post is finally updated with a new chapter

In addition a new small update has been uploaded for Cindini at Bananas (v 3.002)
Check it out here: http://bananas.openttd.org/en/

Where? Is it plug and play, or do I first have to compile OTTD myself? Because that will be a problem.
Here, take a look a my screenshot thread: http://www.tt-forums.net/viewtopic.php?f=47&t=59701
Top

Where? Is it plug and play, or do I first have to compile OTTD myself? Because that will be a problem.